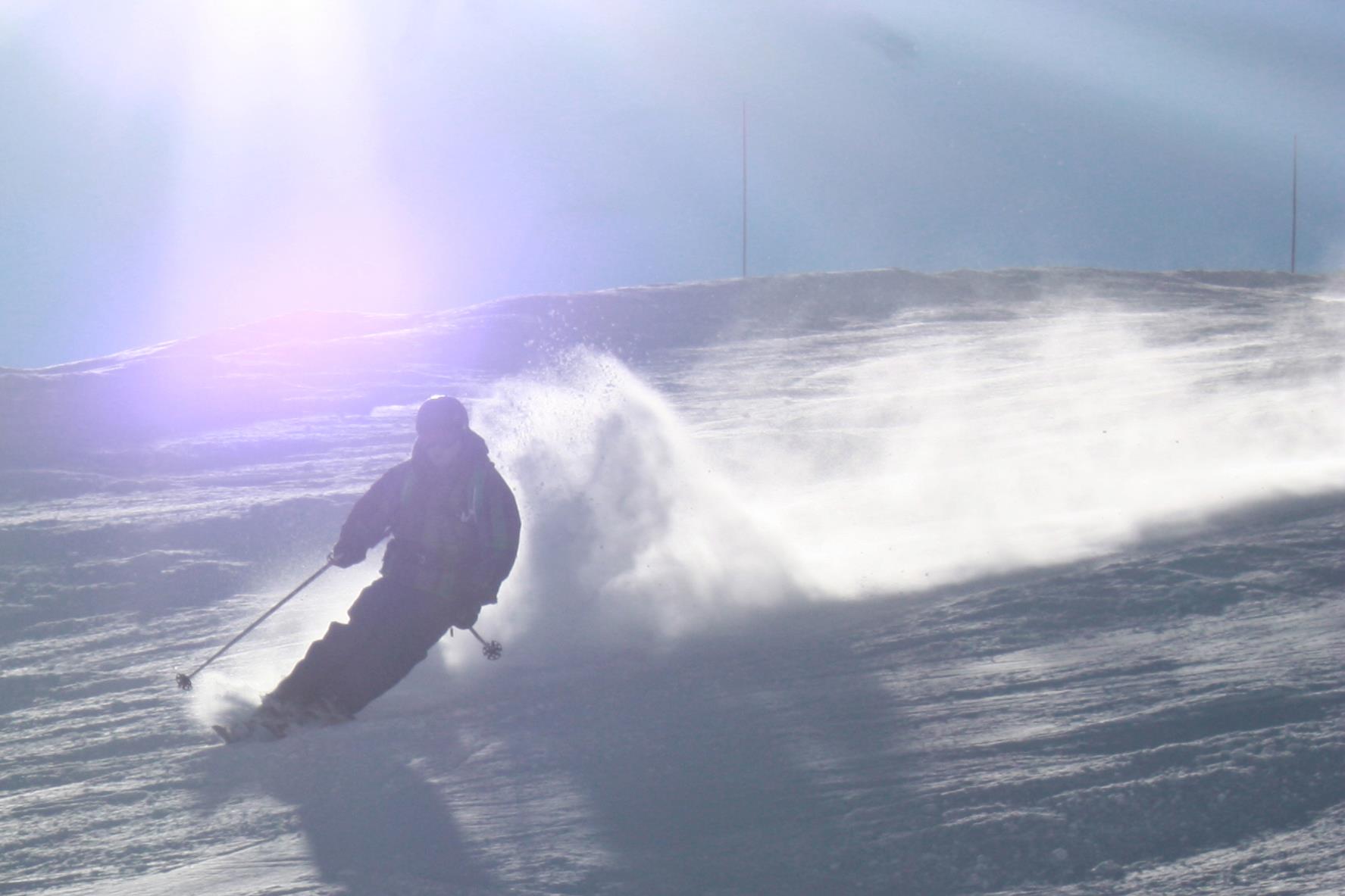 5 pistes in the Three Valleys that you must ski

In 2011 I spent the winter season working in Meribel in the Three Valleys, France. As far as ski areas go, the Three Valleys is probably one of the best in the world. It’s home to 11 resorts and has more pistes and runs than you could ever cover in a week, in fact, I struggled to cover them all over a season!

There’s a huge variety of slopes in the Three Valleys and there’s something for everyone, nice, gentle greens if you’re a learner, some more daring blues if you’re thinking of challenging yourself for the first time, some absolutely stunning reds that will have you skiing them 10 times over and some very challenging and rewarding blacks that you’ll be proud to say you’ve skied.

While you can get local lift passes which restrict you to one of the Three Valleys and save you money (I’d recommend one of these if you’re a novice skier), it’s definitely worth shelling out the extra money for a full Three Valleys pass so that you can experience all that this wonderful ski area has to offer.

In my time in the Three Valleys I managed to ski every slope there and over the month I definitely developed my favourites. So, I’ve compiled a list for you detailing my five favourite pistes. 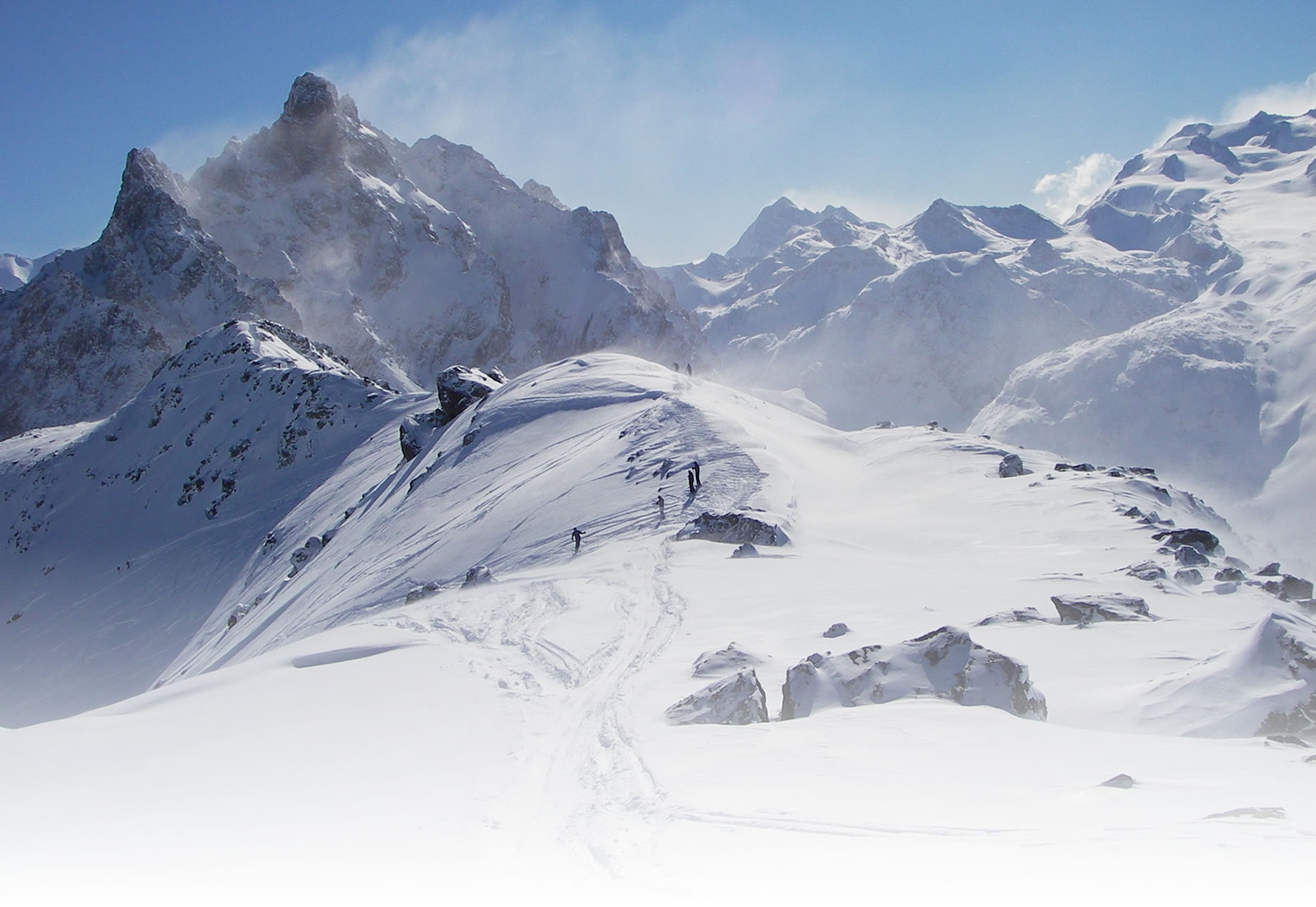 Creux drops off the ridge to the left and is one of the nicest red runs in the Three Valleys.

Arguably one of the most pleasant reds you can ski in the Alps is Creux. It’s a long, long old piste and for a majority of it you’re on a beautiful, wide motorway-like slope. There’s so much room for people to spread out on, which is good because it also happens to be one of the most popular pistes in the Courchevel Valley.

Creux is groomed just about every day, so it’s definitely worth making sure you get up there for first tracks at least once. To access the beautiful red you can take the Verdons gondola from Chourchevel 1850, ski a few meters to Vizelle and from the top of that lift you’re only a short ski away from Creux. From Meribel take the Saulier gondola and follow the path from the top to the right, and from Meribel Mottaret head up Pas Du Lac.

Creux starts out as a wide, fairly steep slope that narrows up towards the bottom where it also becomes more gentle and takes you on a lovely run through the trees. Once you’ve reached the bottom I recommend heading up the lift called Roc Mugnier and then heading down into Courchevel 1650. The view as you head into the resort is incredible and you can take a moment to site out all of the Courchevel resorts  (1850, 1650 and 1550) from your vantage point.

Pro tip: To get the most out of Creux ski it first thing in the morning. It’s such a popular piste that by mid-day it’s usually worn out and over-run with people. Especially worth going there first if you’ve just had a fresh dump of snow. 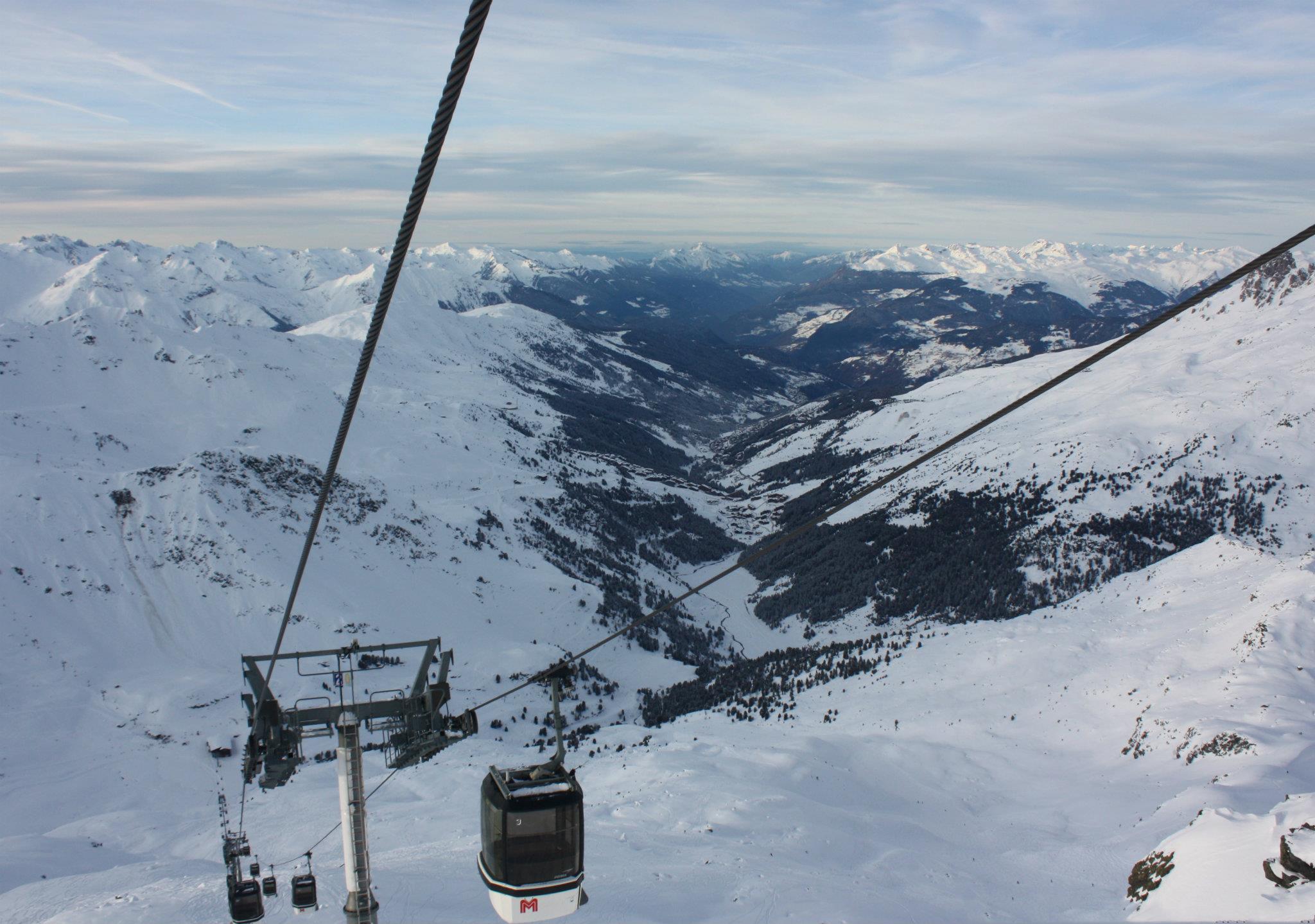 The spectacular view near the top of the Mont Vallon gondola.

If you’re looking at a piste map then you can find this piste by looking at the back of the Meribel Valley and on the mountain of Mont Vallon. There are two pistes running from the top of the Mont Vallon gondola, Campagnol to the right and Combe de Vallon to the left, they’re both red runs and both of them offer some exciting skiing and incredible views, but the best one of the two is, without a doubt, Combe de Vallon.

While Combe de Vallon may be signed as a red, it can be quite tricky and steep at times and if you’re a novice skier it’s probably best to save this one ’till you’re a bit more confident –  there’s no escape route from here in terms of easier pistes so the only way is down.

There are a few things that make this one of the best pistes in the Three Valleys, due to the high altitude of the slopes the snow is usually good all season, it sees the sun for near enough the whole day, the piste is often groomed and there’s one of those views that just has to be seen to be appreciated. It’s incredible looking down almost the entire Meribel Valley, all the way to Les Allues.

Pro tip: When you reach the bottom of the piste don’t be tempted to take the blue ‘piste’ called Ours. It’s dreadful. It may sound nice to be skiing past the beautiful Lac du Tueda, but that’d be if you were actually skiing. Ours is a largely flat and, in some points, up hill track that can be frustrating at the best of times. Instead head up the Mures Rouges ski lift at the bottom and then the Plan des Mains, from there you can follow Rossignol back to the Meribel. 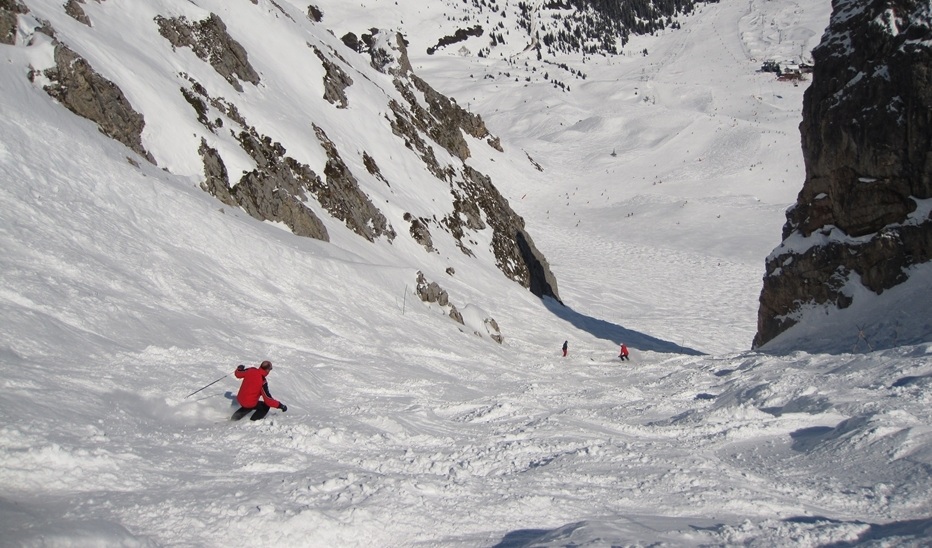 The Grand Couloir is a piste that strikes fear into the heart of many skiers and boarders, but it also ignites a passion to shred up one of the most difficult runs in the Alps. The clue is in the name as to the nature of this slope, it’s a narrow, steep and ungroomed run down a couloir at the top of the Dent de Burgin mountain. The piste can be accessed from the Saulire lift from both the Meribel and Courchevel sides (they have the same name).

The initial run up to the couloir is perhaps the most nerve wrecking part. From the top of the Saulire lift from Meribel you’ll take a left onto a very, very narrow ridge and you’d be forgiven for thinking I’ve given you wrong directions. To the left you have a near vertical drop into the center of Meribel and to the right there’s a just as vertical drop into Courchevel.

If you can stomach the approach then the rest of the piste is incredibly fun and technically rewarding. Following on from the ridge you enter the top of the couloirs, there are numerous opportunities to drop off into the other unpisted ones, but just remember, if you take a tumble on these difficult slopes and you’re not on the piste, your insurance may not pay out. So, sticking to the piste you enter the top of the Grand Couloir. It doesn’t get groomed and the give-away signs to this fact are the moguls that are the size of mini-vans.

It’s a short run down the very steep and fairly narrow couloir before you join the red run Combe Saulire, from there you can take a break and admire the run you just did, before hopping back on Saulire gondola and doing it all again.

Pro tip: The Grand Couloir is easily affected by the weather so there’s a chance that it might not even be open at the time of your ski trip. If you get a fresh dump of snow, go and check if they’ve opened it, if they have, do it, man! 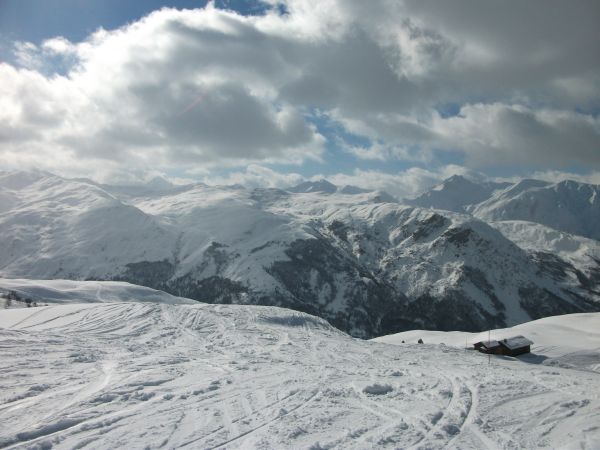 The view from the Jerusalem piste. Image source

Another wonderful red but this time on the other side of the Three Valleys, dropping off from the ridge between Meribel and Saint Martin de Belleville. Jerusalem is a really enjoyable slope to ski and it’s often very quiet with very few other people skiing it, in this respect it’s a hidden gem.

The slope can be reached by the Tougnete chairlift from Meribel and the very long and very slow St Martin gondola and chairlift from Saint Martin de Belleville. From the top of these lifts you follow the ridge down Cretes before dropping off to the left and onto Jerusalem. It’s a really nice, wide red with lots of rolling humps and some nice corners.

There’s a really nice mountain restaurant/café at the bottom of Jerusalem just before it joins the Verdet slope that runs underneath the St Martin 1 gondola. It’s always nice to take a break here and warm yourself up with a hot chocolate…or a beer. 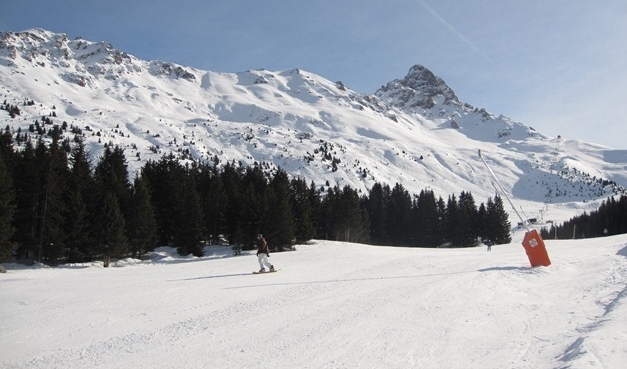 It may be flat, but it’s incredibly enjoyable.

This run is a little different from the others in this list in the fact that it’s probably one of the easiest slopes to ski in the Three Valleys. It’s the slope where the ski schools often take their classes to teach them the basics, but just because it’s an easy slope it doesn’t mean that it can’t be fun!

Blanchot can be reached by taking the Rhodos 2 gondola from the Chaudanne in Meribel centre, the Golf and Altiport lifts from Meribel Village and by dropping down from the top of Dou de Lanches and Col de Loze if you’re staying in Courchevel.

The slope is a very gentle and very wide run that takes you over terrain that is a golf course during the summer. It’s really nice to just chill out and make your way slowly down this one and if you like you can drop off the sides into the trees and make some interesting paths.

Pro tip: If you’re staying in Meribel, finish your day off by taking the Blanchot run all the way into Meribel Village and experience the après at Lodge du Village. They tend to have live music on every night and it’s a great crack! Plus, there’s a free bus service that will take you back up to Meribel when you’re suitably watered.

If you’ve been to the Three Valleys and have any pistes that you particularly like, leave a comment below and tell us about it!