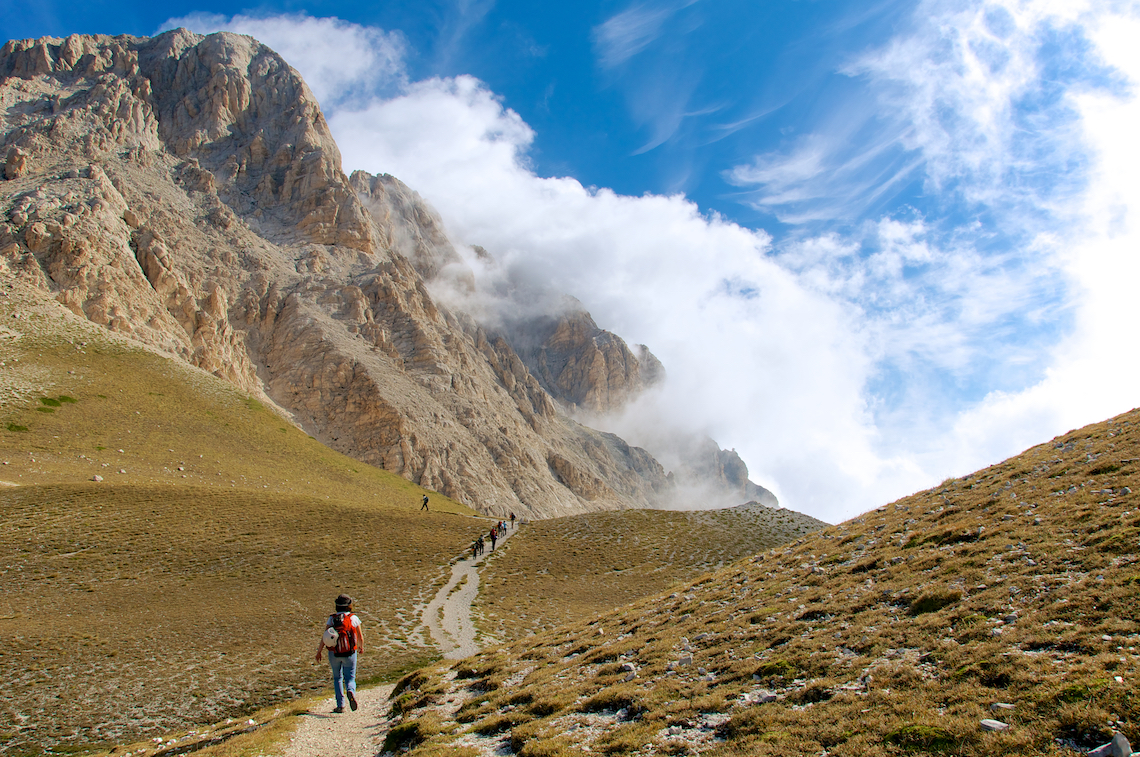 6 of the most adventurous things to do in central Italy

You can classify central Italy as the following regions; Tuscany, Umbria, Marche, Lazio and Abruzzo. Essentially, we’re looking at the region from the flat Po Valley in the north down to mid-way between Rome and Naples. You might thing this middle ground is lacking in adventures, but there are a myriad of epic things to do in central Italy that you’ve probably never even heard of.

The Apennines are a series of mountain ranges that form the backbone of the Italian peninsula, stretching from the coastal region of Genoa in the north, and following a broad arc to the tip of the Italian toe at Reggio Calabria in the south. The highest summit of Corno Grande (2,912m) tops out in the Abruzzo region where, should you be adventuring in winter, you can ski and ice climb, as we at Adventure Travel have done a few times in years gone by.

Explore unusual things to do in central Italy and you’ll be rewarded with lesser-visited attractions and sites in the mountains, while you can also dip into the busier but no-less amazing towns and cities of these areas, including the country’s capital, Rome. Here, you could spend a lifetime wandering around in fascination as you check out the Roman ruins, and it’s well worth taking a walk down the Appian Way, one of the first Ancient Roman superhighways.

Perhaps one of the best things to do in central Italy is seeking out all the remarkable flora and fauna that can be found in the wilder regions of the mountains. Head into the Abruzzo National park and you might just run into a pack of wild wolves, or even catch a glimpse of a wild bear. It’s hard to imagine that there are still animals like this roaming around in Europe, and it adds something special to any trip. With all that in mind, perhaps it’s time to branch out from the Alps and the Dolomites and find out all the amazing things to do in central Italy.

The region of Abruzzo provides and all-you-can-eat buffet of hiking trails, peaks to bag, and other adventures to be had, and singling out just a handful is a very difficult task. It was only by chance that I stumbled upon the Celano Gorge Trail, a relatively unknown hiking path on the southern fringes of the Sirente-Velino national park, but when I saw it I knew I had to include it in this list.

While a lot of the attractions of Abruzzo are mountainous hikes, the Celano Gorge Trail is one that takes you through a narrow and imposing gorge. Head to the small town of Celano and follow the red and white signs for trail 12 and you’ll be taken on a wonderful hike through the four-mile-long Celano Gorge. Here, you’ll be taken deep into a rocky chasm between sheer rock faces which, on occasion stand nearly 200m high and only 3m wide. Above you, eagles soar, and for a moment you’ll be in your own little world, in awe at the power of nature 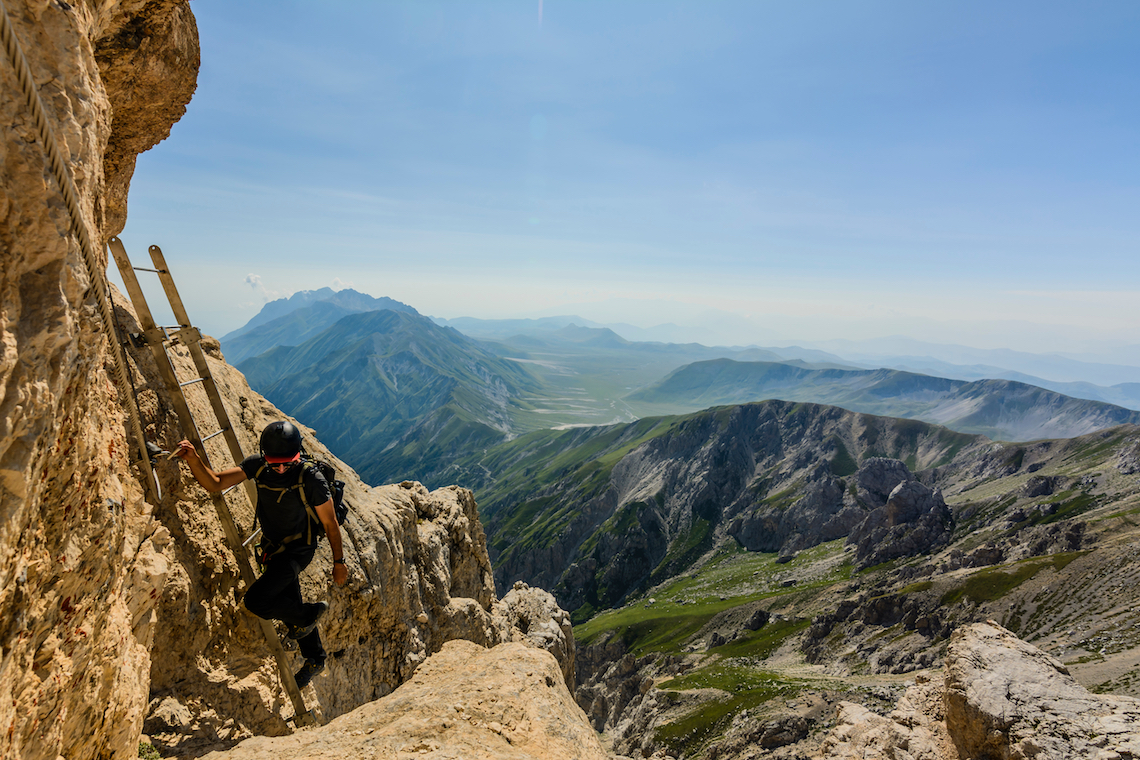 Translating to ‘great horn’, Corno Grande, which is part of the Gran Sasso Range, is the highest mountain in the Apennine Mountains, and also the highest peak on mainland Italy outside of the Alps (standing at 2,912m). Viewed from the north, east, and west, the mountain rises in dramatic fashion, with huge rock faces housing exciting via ferratas and climbing routes, along with one of the most southerly glaciers in Europe; Calderone Glacier.

Head there in winter and the opportunities for winter mountaineering and skiing are plenty, basing yourself on the high plateau of Campo Imparatore (often referred to as Little Tibet). In summer, after the snow has melted, what were tricky climbs in winter become relatively straightforward hikes. The ‘via normale’ trail, which ascends the mountains north-western side, is the most common route of ascent, and is fairly gentle going with some easy scrambling. This in mind, in peak season it can get quite busy with Italians seeking the thrill of the mountains.

Spend some time in Campo Imperatore exploring the many hiking and easy mountaineering options at your disposal and, in winter, you can hang up your walking boots in favour of skis.

Explore one of Italy’s deepest caves 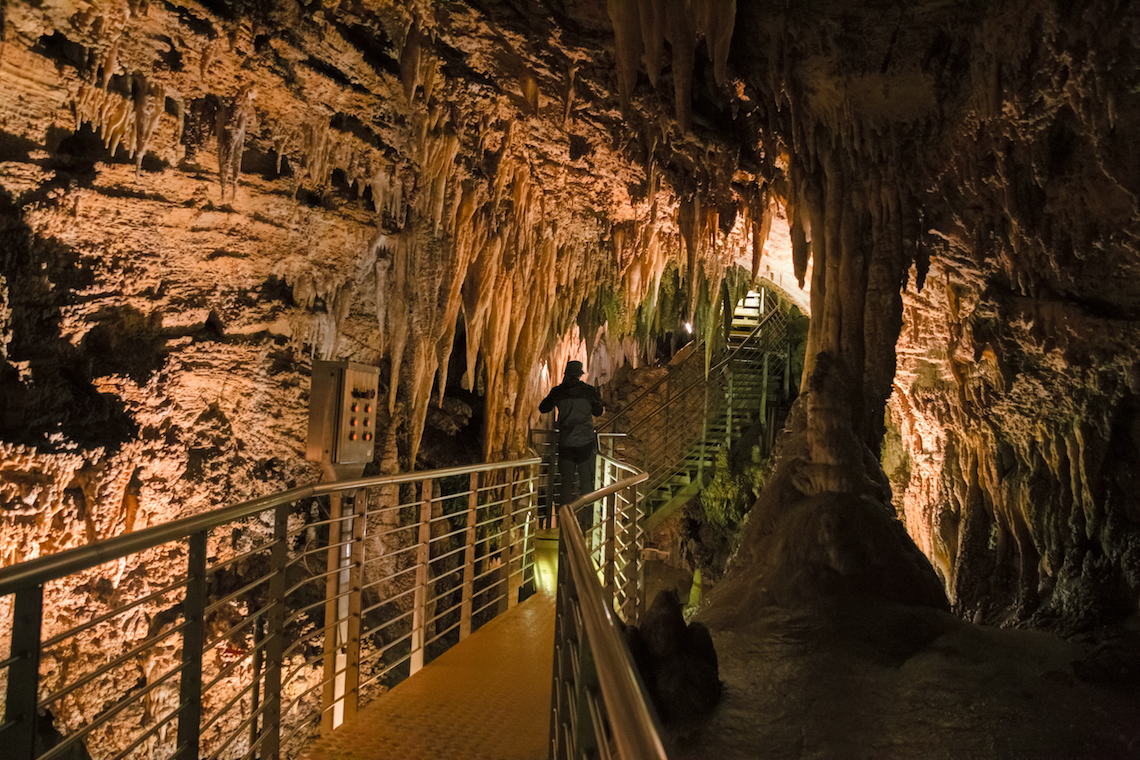 The region of Tuscany is famous for many things; it’s considered to be the birthplace of the Italian Renaissance, it’s home to the historic cities of Florence and Siena, rolling hills on top of which sit world-renowned towns, like Montepulciano, and verdant valleys in which some of the best wine in the world is produced. Then there are the iconic cypress trees that line the meandering roads, and if you’ve seen the film Gladiator, you’ll remember the scene where Russell Crowe is reunited with his wife in the afterlife – that was shot in Tuscany.

But there’s even more to this wonderful part of Italy than that. Head to the coast and you’ll find vibrant seaside towns with pristine beaches. Just a bit further inland, you’ll also come across the peaks of the Apeninne Mountains, and in Parco Alpi Apuane, some of the country’s (and the continent’s) deepest and most spectacular cave systems.

One such cave system that should be afforded your time is Antro del Corchia, a complex system of caves with more than 40 miles of tunnels. Here, you can be guided on two tours, both around three hours long, and both revealing a fascinating history of over five million years. Filled with astonishing rock formations, wide-open caverns, waterfalls, and stalagmites and stalactites, from top to bottom, there’s a height difference of 1,200m, making these the third deepest caves in Italy.

Also in the area, you’ll find a network of hiking trails waiting to be explored, from simple strolls to more full-on multi-day treks, while a day spent chilling on the beaches of Forte Dei Marmi provides rest and relaxation.. 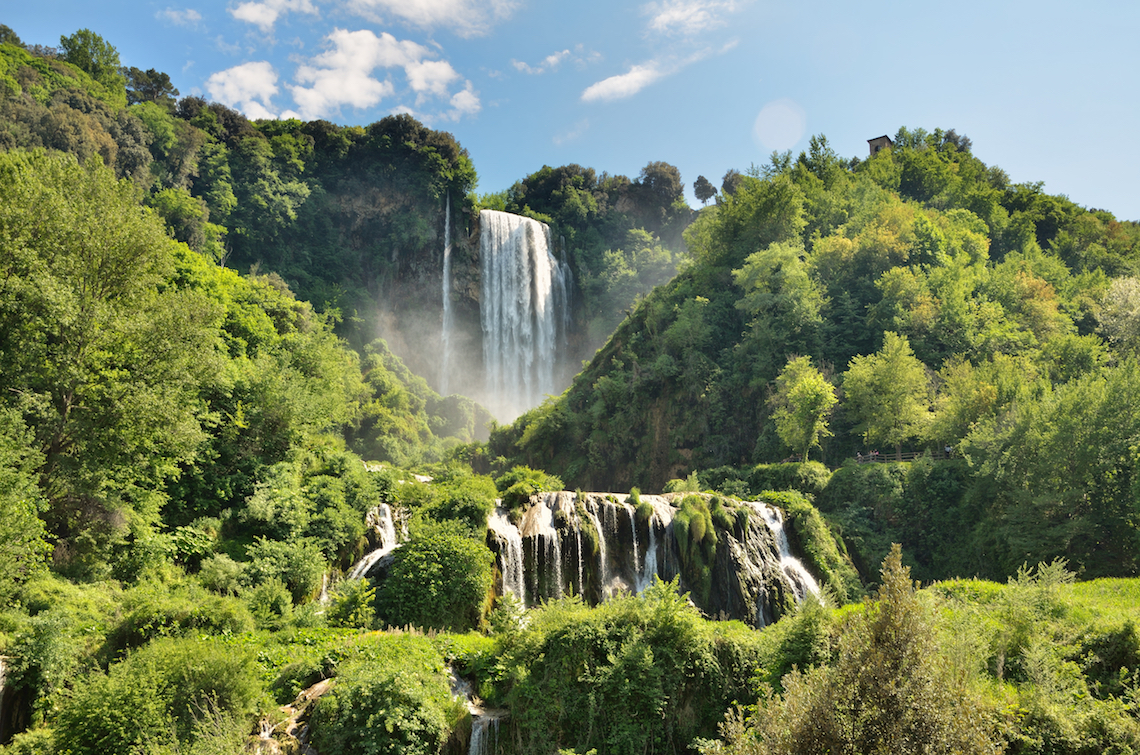 About 70 miles north-east of Rome you’ll find the Nera Valley and Parco Fluviale del Nera, or the Black River Park, in Umbria. Here, high wooded hills dominate the scenery, while the Marmore Falls form the main attraction to visitors. Visually beautiful, the interesting thing about Marmore Falls is that they were created by the Romans in 271BC, when they re-routed the River Velino to join with the River Nera. This in mind, they’re the highest man-made waterfalls in the world, and visiting them is a real treat.

In 1920, the falls were adapted to help generate power for the region, so they’re not always at full flow, but if you time your visit right, you’ll see one of Italy’s most beautiful waterfalls. Around the area, there are a number of hiking trails that roughly trace the routes of ancient mule tracks. They vary in difficulty and will keep you occupied for a day or two while you explore the rich history of the area. 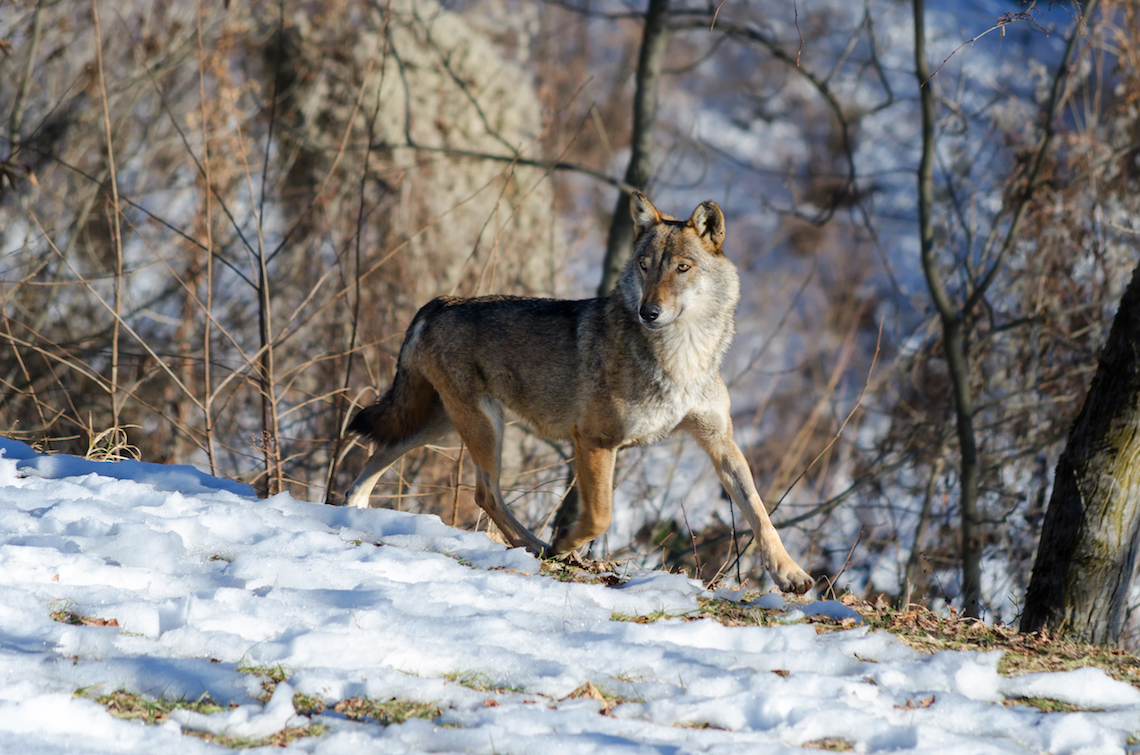 Sat in an office in Stratford upon Avon, it’s hard to imagine that there are wild wolves still roaming the mountains and forests of Europe. According to legend, the last wild wolf was killed in the UK in 1680, near Killiecrankie in Scotland, so it’s no wonder we’re so unaccustomed to the majestic beasts being free to wander around in the great outdoors. It’s with great interest then, that I discovered that you can go wolf tracking in Abruzzo National Park.

Wildlife Adventures offers a three-day trip through the snow-covered mountains of Abruzzo between November and April, where they give you the ‘opportunity to see or hear real wolves’. It’s got to be one of the most enriching things to do in central Italy, if not the whole country. The trip starts in Pescasseroli, an old Italian village, which is a two-hour drive from Rome airport. This could be the perfect long weekend adventure. 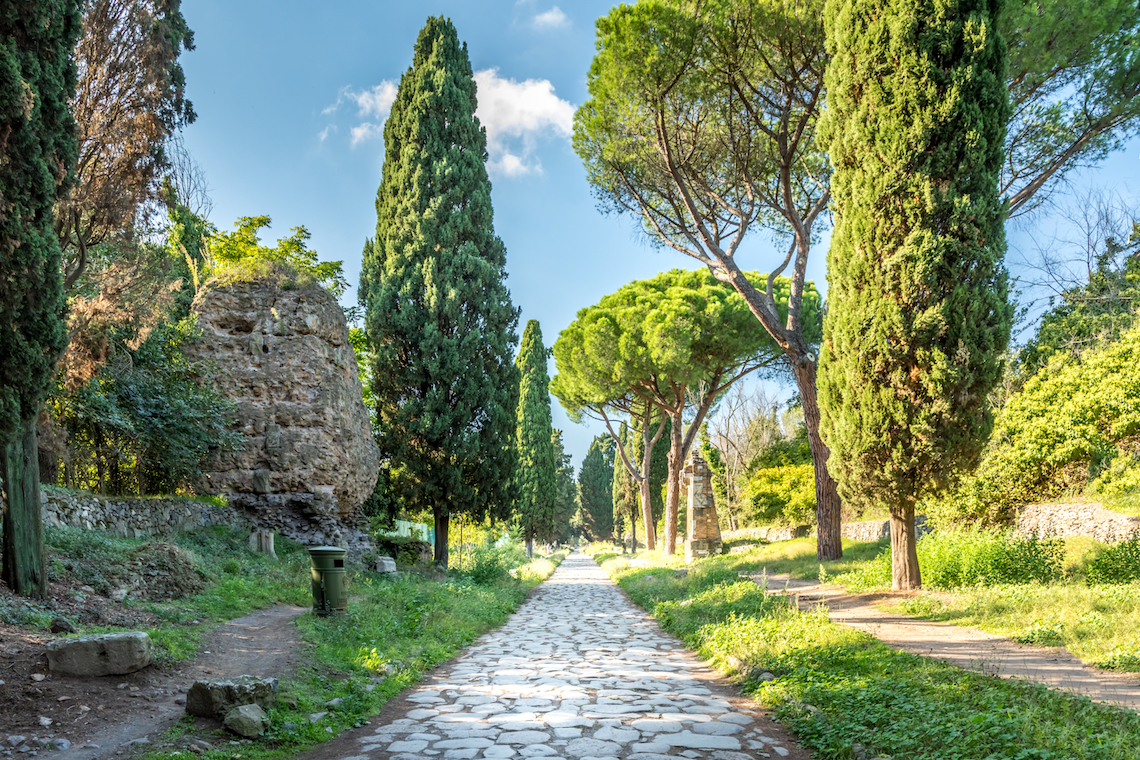 In many ways, no list of things to do in central Italy would be complete without a trip to Rome. The country’s capital was once the centre of the Roman Empire and, as such, it’s packed full of fascinating historical attractions. The remarkable amphitheatre of the Colosseum, the Roman Forum, the Arch of Constantine… You could spend day after day exploring the city and still not see it all.

While a walk around Rome is surely worthwhile, a trip down the first 10 miles of the Appian Way is a must. Compared to the hiking trails of the Alps, it’s a placid experience, but one that is equally as rewarding as you visit the numerous historical buildings and relics along the way.

Built in 312BC, the Appian Way was one of the first strategically important Roman roads and it stretched for 400 miles between Rome and Brindisi, in the south east of Italy. It effectively acted as a super highway for Roman troops and supplies, allowing them to move quickly and effortlessly, and was a key factor in the Romans winning a few wars. Fans of Spartacus may well remember the name, as it is also this road on which 6,000 rebels were crucified following the defeat of the ex-gladiator and his followers in the Third Servile War.

Today, you can walk the first 10 miles of the Appian Way, starting in the centre of Rome. It will take you through the Appian Way Regional Park where the history of the once great empire is protected and well worth visiting.

More adventurous things to do in central Italy

Want more information about all the incredible things to do in central Italy? Simply head over to the Italian tourist board website, where you can find a wealth of information, hiking routes and more. Click here to visit the website.

Alternatively, check out our full adventure guide to Italy here.