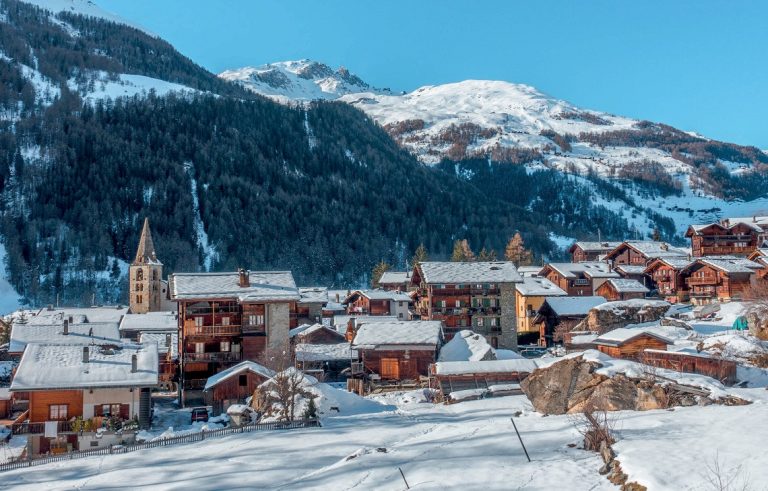 Every year in the run-up to LENT, the Swiss village of EVOLÈNE celebrates the arrival of SPRING with a most UNUSUAL party

I’m surrounded by an intensely three-dimensional landscape of snowy peaks and valleys. They stretch off into the distance in every direction as far as the eye can see, all light and shade and crazy angles. The bright mountain sunshine reflects violently back up from the snow, making me grateful for my sunglasses. The only sounds I can hear are the wind soughing gently in the nearby trees… and cowbells? It’s the middle of winter. The precious cattle that make Swiss cheese quite so delicious are all tucked up warm in their sheds, eating the remnants of last summer’s grass. So, what’s the story with the cowbells? 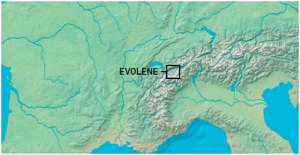 I’m starting to wonder if it’s an unusual variant of tinnitus, caused by the altitude perhaps. Suddenly, a wave of nightmarish figures breaks over the crest of one of the nearby slopes, their outfits a jagged contrast of modern skiwear mixed with animal hides and menacing wooden masks.

These figures that wouldn’t look out of place in the pages of a medieval fairy tale are the Peluches, roaming the mountains and the nearby village, swinging their cowbells to frighten away the evil spirits of winter. Yes, these are the good guys.

Evolène in the Val d’Hérens in Valais, Switzerland feels a lot like the land that time forgot. Yes, there are several ski areas served by a network of chairlifts, with the odd mountain restaurant dotted about on the slopes, but just minutes away from the lift stations a blank canvas of mountains invites exploration The Peluches are a physical manifestation of the atmosphere of this area, with its timber-framed buildings and narrow cobbled streets, it feels anchored in the middle ages. Carnaval is when the past really comes home to roost though, and the Peluches (and everyone else) come out to play.

The run-up to Lent is traditionally a time of celebration in many places across the world, but in Evolène, there’s a much more pagan feel to the whole thing. Local history has it that these traditions have been active since the bronze age, the masked figures hastening winter away and welcoming the spring. It gets distinctly cold here in the winter, and at one time, the village would have been all but cut off from the outside world, so it’s no surprise that such a tradition gained a firm hold and endured even after the arrival of Christianity.

Those hairy, scary monsters may be roaming the mountains during the day, but at night, they patrol the streets of the village, swinging those clanging cowbells and chasing unsuspecting souls. As with many traditional carnivals, anonymity is everything. The heavy wooden masks featuring grotesque creatures or animal likenesses are hand-carved in the village using locally sourced wood and are handed down through generations. Judging by the diminutive height of some of the figures ambling about, it’s clearly a family affair and showing no sign of dying out any time soon.

Carnaval draws visitors from all over the Canton of Valais, mostly for the sheer spectacle of the Peluches as they go about the same important metaphysical tasks they have since the middle ages. As with many such celebrations, it’s also the party atmosphere that attracts the, albeit modest, crowds. The usually sleepy streets are filled with live music and revelry.

This year, one of the acts is a huge brass band decked out in Day of the Dead make-up and costume, playing contemporary favourites while revellers dance and drink. Bars are packed with merrymakers, a few wearing the traditional local costume of heavy woven skirts and bodices. In one bar, I’m offered schnapps ‘on tap’ from a man in a wig. He’s dressed in that same embroidered skirt and blouse, dispensing his drinks from a false bosom — tots from teats or tipple from the nipple?

I politely decline, but his charms are proving pretty popular with others. I duck out and head for a restaurant where fondue is the name of the game, served in a bread receptacle rather than the traditional pot. A bit of melted cheese will go a long way to soaking up some of that Carnaval good cheer.

Having already explored some of the ski areas, I’m ready for some snowshoeing the next day. Heading up into the quieter areas of the mountains, climbing steadily up through the trees, I’m reminded once again of the past. I am probably treading (inelegantly) the same footsteps as the farmers have with their cattle for centuries, every spring.

As I top out in a hanging valley above the Lac d’Arbey, the lake itself covered with an impenetrable layer of ice and snow, I’m entering the favourite summer pastures of the local herds. Taller peaks loom ahead of me, early shadows starting to surround me as I follow the circular route back to where I started. Signposted ski touring trails crisscross as I descend, for humans more super than I, or perhaps just those who didn’t sample the local schnapps last night.

Throughout my stay in Evolène I have encountered the Peluches on numerous occasions, but it’s not until my final day in the village, the last Sunday before Lent, that I finally meet their nemesis: The Empaillés. These local folk wearing hessian sacks stuffed with upwards of 20kg of straw, are the baddies to the Peluches goodies — the evil spirits of winter threatening the arrival of balmier months.

That final morning sees these volunteers gathering outside the village to be sewn into their overstuffed costumes. Soon, they are lurching along the streets to the village centre, followed by floats filled with dance troupes and community groups, as well as the obligatory confetti cannon.

With the winter sun shining down, the poor Empaillés are soon overheating in their insulating layers. A few refreshing beers donated by local people results in unruly piles of redfaced straw-stuffed figures, literally stacked against each other on the ground, since the costume makes a normal sitting position physically impossible. It’s safe to say they’ve vanquished themselves, without the need for intervention by the Peluches.

The finale of the celebrations is the burning of one of the Empaillés. No reassurance is given when I ask — laughingly — whether there’s someone inside at the time. If you’ve seen The Wicker Man, you’ll know what I mean. But that’s it, now winter is officially over and let the season of spring commence in this rural mountain village. Cue more festivities. In reality, spring is a way off yet. It won’t be until June that the cows are allowed out from their warm sheds to once more climb up to the mountain pastures. 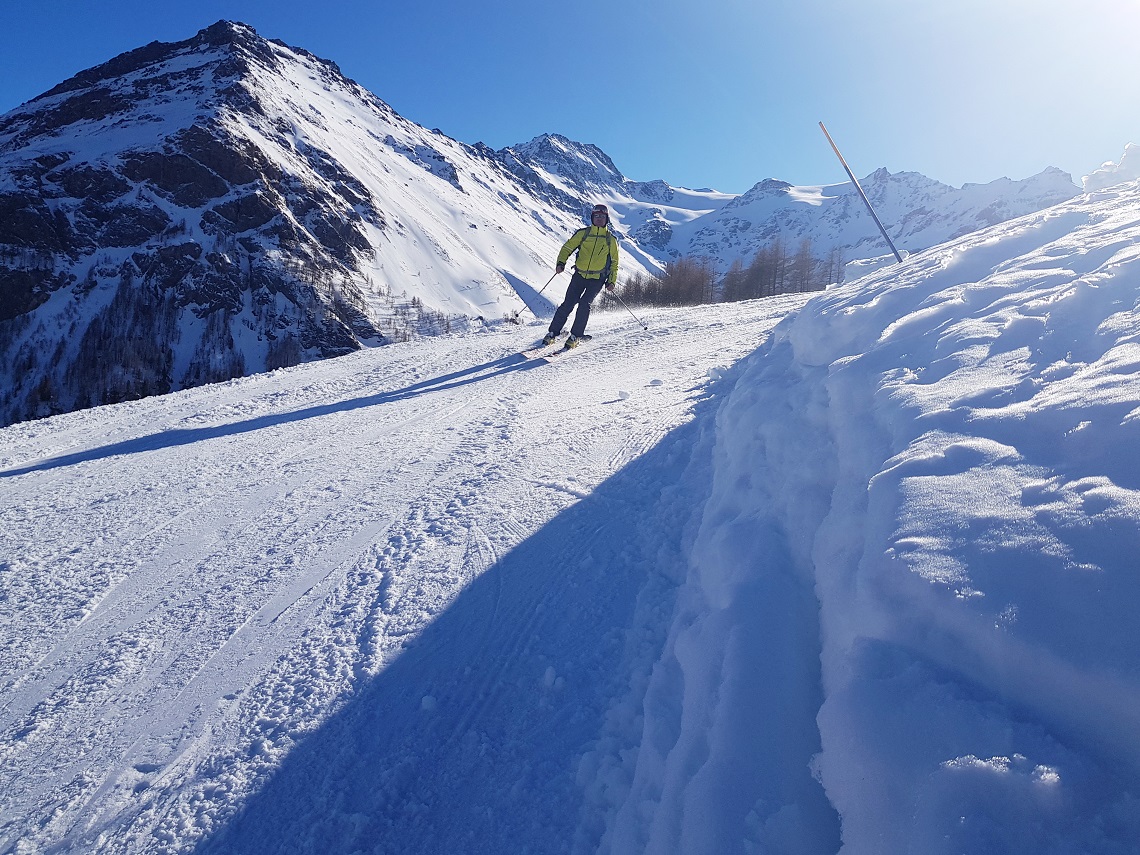 Every June the local female Hérens cattle show off their natural aggression as they make their way to the mountain pastures during the Inalpe, fighting for the top spot of ‘queen’ of the herd. Something else that hasn’t changed for centuries. Reputedly, the annual cow fights are almost as much of a crowd-puller as Carnaval.

I’m sad to leave Evolène with its curious blend of ancient and modern. But who am I kidding? Thanks to these unique celebrations that are still very much alive and well, there’s far more ancient and spooky here than 21st Century. With its timber-framed houses and turn of the (20th) Century hotel nestled along the main (only) street, Evolène is a picture-perfect example of traditional Switzerland, and I hope I remains that way for a long time to come. 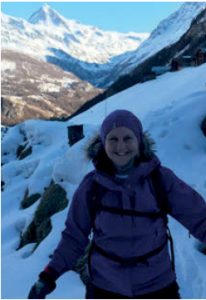 Lara has been travelling since birth, clocking up around 30 countries so far, and has no intention of stopping just yet. She has been editor of Adventure Travel, Women’s Cycling and France magazines as well as writing for numerous travel, outdoor activity and adventure publications over the years. What floats her boat most is exploring unusual places on two wheels, two feet, or bobbing about in the water. Follow her on Instagram at @lara.dunn and on Twitter at @LaraDunn