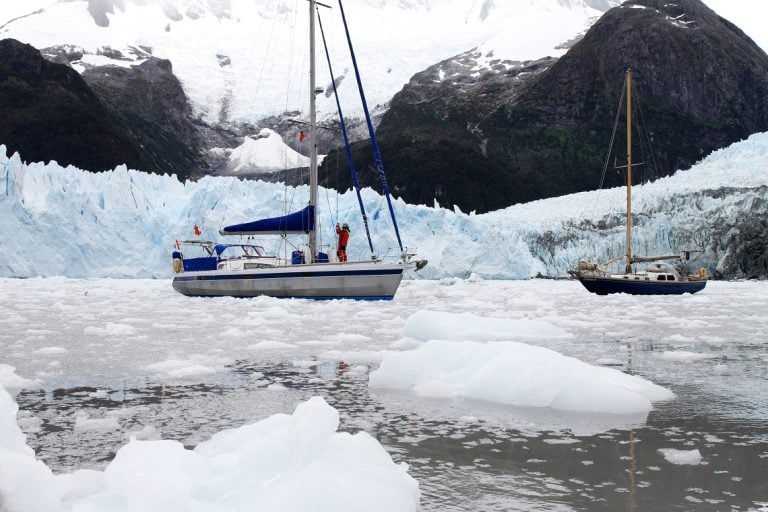 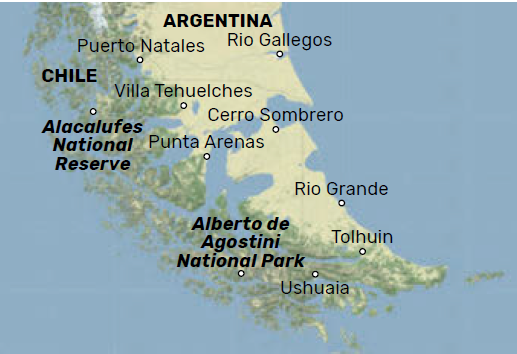 Most people come to Puerto Natales for the Torres del Paine National Park, but I was embarking on a different adventure. My friends Colin and Ana had invited me to join them on board their yacht Ithaka. They were on their way home from a four-year voyage in the Pacific and now sailing south through the Patagonian channels. The coast of Chile is a sailor’s dream; there are 30,000 islands in the Magallanes region alone.

Puerto Natales is more than 80 miles from the open sea. It took us two days to rejoin Canal Smyth, the main route south. At first, I was hopelessly disorientated as we followed winding channels with mountains all around. It didn’t help that the sun was in the wrong place — this being my first time in the southern hemisphere. But I had already fallen in love with Patagonia when we stopped for the first night in Caleta Mousse. With wooded shores and snowcapped peaks above, I thought this snug little cove was the most perfect anchorage I’d ever seen.

When I woke in the morning to the sounds of birds calling in the trees and a waterfall tumbling down the hillside, it was so still I wouldn’t have known I was on a boat. To my amazement, this tranquillity was not unusual; despite the strong winds in the channels, there are many lovely Caletas providing the most peaceful and secure anchorages any sailor could wish for. Appropriately, ‘Caleta’ can mean ‘hiding place’ as well as cove.

An unexpected bonus was the excellent bird— watching from the boat — we enjoyed close views of colourful kingfishers and big, black Magellanic woodpeckers, as well as waterbirds like the flightless steamer ducks and Upland geese with their goslings.

Out in the channels, I was excited to see my first albatrosses and penguins. The small Chilean dolphins were shy, while Peale’s dolphins were enthusiastic bow-riders that would follow us into the anchorages, occasionally joined by fur seals.

One day Colin spotted the blow of a large whale, and we got close enough to identify a small group of sei whales from their tall fins. But of all the wildlife, the most surprising was the diminutive Green-backed firecrown – it was mind-blowing seeing a hummingbird and albatrosses in the same day!

After five days’ sailing, we approached the Estrecho de Magallanes. On almost the exact same date nearly 500 years ago (28 November 1520) Magellan’s fleet departed to the west. Magellan apparently ‘wept for joy’ at having discovered the way through to the Pacific.

Others were less enthused. Captain Pringle Stokes, sent to survey these waters 300 years later in HMS Beagle, became so depressed he shot himself. Earlier he had written in his diary ‘nothing could be drearier than the scene around us. The lofty, bleak, and barren heights that surround the inhospitable shores of this inlet, were covered … in dense clouds, upon which the fierce squalls that assailed us beat…’

The strait is 350 miles long, but we were only transiting the western half. Two days in we caught up with a smaller yacht Colin and Ana had met in Puerto Montt. The two boats had been sailing together until Ithaka diverted to Puerto Natales. I was curious to meet this single-hander, Aleko, who I’d heard so much about.

His boat Beduin is a classic British design from the 1960s — very pretty, though quite small for long-distance voyaging. Aleko himself is more complicated; he lives in Greece, where he was born, but his first language is German, and his father was Hungarian. I loved the boat from the start; it took a few weeks to realise I was becoming very attached to the skipper.

In such remote and unforgiving waters, it makes a lot of sense to sail in company. It was also a lot of fun and we often shared meals and stories. Aleko had set out two years earlier to sail round the world.

He had passed through the Magellan Strait from east to west at the beginning of winter, the hard way against wind and current. Instead of heading on to warmer waters and South Sea islands, he turned round, partly because the voyage was taking too long, but also to see more of Patagonia.

We negotiated the narrowest part of the Strait at Paso Tortuoso, where we spotted a large flock of birds and then a blow. We were entering the Parque Marino Francisco Coloane, a protected area for humpback whales and here they were, feeding along with Black-browed albatrosses, Magellanic penguins, and skuas.

After negotiating the Canal Cockburn and the open ocean’s freshening wind, it was a relief to escape into the relative shelter of Canal Ocasion on the far side. But the surrounding landscape was far from welcoming with hardly a tree to be seen, just vast, weather-worn slabs of bare rock. The Brecknock peninsula is the western tip of Tierra del Fuego, exposed to the full force of the winds that circle the pole.

As we turned into Seno Occasion, the hills became steeper and even more forbidding. Sailing towards a sheer rock wall with the wind funnelling through the narrows, it seemed impossible there could be anywhere to anchor. But at the last minute a tiny, sheltered corner was revealed where we secured the boats well to sit out two days of gales. We were glad of a rest and time for repairs. ‘Sewing is like meditation’, Aleko told me, as he spent eight hours stitching his torn sail.

The weather was still cold and wet as we headed east along Canal Brecknock and across Bahia Desolada, even colder in Canal Ballenero, with a biting Antarctic wind bringing snow showers.

Canal Ballenero was named by the Beagle’s second, more famous captain, Robert Fitzroy, after the theft of a whaling boat by the natives. While trying to recover his boat, Fitzroy captured several young Yaghan including a nine-year-old girl. He took them back to England to ‘civilise’ them and teach “the plainer truths of Christianity”. On Darwin’s voyage, the three survivors were returned home along with a missionary, but the experiment was not a success from anyone’s point of view.

Even Charles Darwin, generally more open-minded than his contemporaries, regarded these hunter-gatherer nomads as ‘miserable, degraded savages’. He expressed no admiration for their ability to survive without clothing in this harsh environment or their bark canoes. Within a hundred years the Yaghan (or Yamana) and other Fuegian tribes had been decimated by direct persecution and European diseases.

The weather improved as we entered the Brazo Noroeste, the northwest arm of the Beagle Channel. Here, at the last tip of the Andes, the ice spills into the sea. The magnificent Cordillera Darwin is cut by deep fjords ending in tidewater glaciers.

Ithaka has an aluminium hull, but as the ice got thicker and thicker we tied the boats together, switched the engines off, and drifted with the ice.

I climbed the mast to take photos and Aleko went paddle-boarding while Ana prepared pisco sours with glacial ice. By the time we’d had lunch the boats had turned around in the gentle swirl of the currents and were moving sedately back down the sound.

Back in the main channel, the sky turned dark and ominous to the west. Expecting a chubasco, we started to reduce sail, but none of us anticipated its ferocity — from a gentle breeze to 40 knots in a few minutes. After a tough day, we were glad to reach the perfect shelter of Caleta Cinco Estrellas, a small hidden lagoon in Bahia Tres Brazos on Isla Gordon.

The following day was a complete contrast. The hillsides seemed to glow in the sunshine and reflected in the dark, still waters. The Patagonian forests of evergreen beeches festooned with mosses and lichens are beautiful but almost impenetrable in most places. Here, for once, it was possible to climb up through the trees onto the open ridge above, the first time we’d reached the snow line.

As we stopped to admire a rainbow and the spectacular views across the channel to the Cordillera Darwin, a large bird appeared and started circling overhead — a condor! We’d already seen a few in the distance but not close enough to appreciate their huge size. The Andean condor has the largest wing area of any bird. The primary feather Aleko found later had a shaft almost as thick as my little finger. A second bird joined the first and soon, to our astonishment, there were four condors soaring over the bay.

We went to explore Seno Pia next, which boasts no less than three glaciers. Heading up the eastern arm, with the wind astern, we found the route to the glacier open as the wind was holding the ice at the head. The ice cliff towering above the mast was sculpted into fantastic pinnacles. Ventisquero Guilcher, which we visited the next day, was the most beautiful, though; dazzling white with mysterious blue caves.

The rain of the morning had cleared, giving spells of sunshine and glimpses of the mountains above. Once we’d anchored in Caleta Olla, the unexpected warmth tempted me to go for a swim. Unlike the Yaghan women who used to dive for shellfish, I managed just once round the boat with the water temperature at 7C. More fun was borrowing Aleko’s spare paddleboard to explore up the river.

The next day we all set off on an overland expedition to the Ventisquero Holanda. It turned into more of an adventure than we expected, thanks to the landscape engineering of North American beavers. Beavers are keystone species in their native habitats but, here, as so often with introduced species, their habits are destructive and on a large scale. The flooding behind their dams kills thousands of trees and turns the forest into a vast swamp. We eventually reached the lake, but the glacier was on the far shore.

Giving up on the glacier, we sat quietly for a few minutes to enjoy the view over the lake. Stopping and sitting, I realised, was something we hadn’t done enough of — with time ashore always limited there never seemed to be an opportunity. Now we were rewarded with a small flock of thorn-tailed rayaditos hopping round the bushes. Darwin found it the commonest bird in Tierra del Fuego, noting ‘This little bird no doubt appears more numerous than it really is, from its habit of following with seeming curiosity any person who enters these silent woods’.

The last two days’ sailing were pleasant, and soon after the first houses we’d seen for 400 miles appeared. We passed the Argentinian city of Ushuaia to the north on our way to the smaller Chilean harbour of Puerto Williams where we enjoyed Christmas with the crews of other yachts.

I knew there would be more adventures when we sailed on to the Falklands, but as Darwin commented, ‘It is the fate of most voyagers, no sooner to discover what is most interesting in any locality, than they are hurried from it.’ I would have turned around there and then and headed back west. 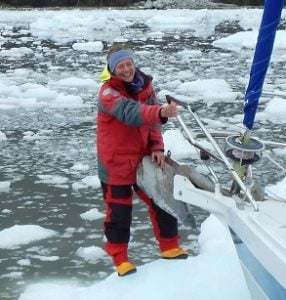 Genevieve Leaper is a freelance nature photographer, writer, and environmental consultant. She has been sailing all her life, but Patagonia is her most exciting trip to date, as well as the start of more sailing adventures with new partner Aleko. She is based in Scotland, but now spends several months each year at his home in Greece where they sail Beduin around the Aegean islands.