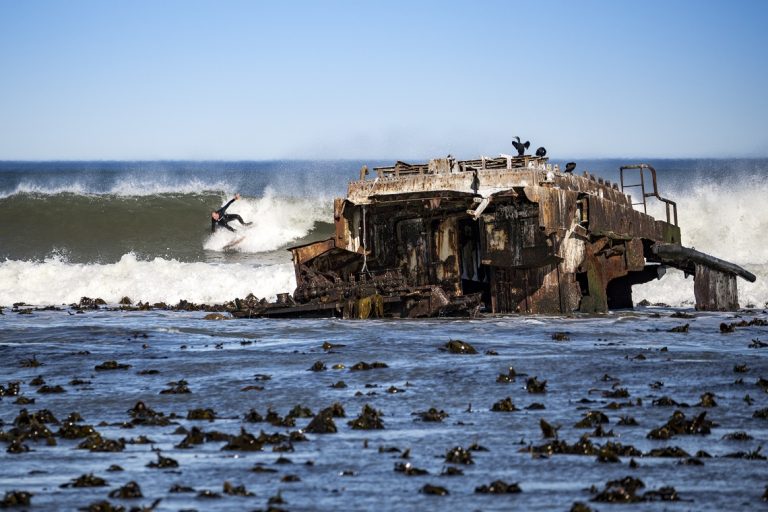 DIAMONDS IN THE ROUGH

Way up high on SOUTH AFRICA’S north-western shoreline — along a stretch of WILD country where ARID scrubland collides with an ICY ocean, you’ll discover the DIAMOND COAST in all its grit and glory. Dozens of adventures await, but surfing the RAMBUNCTIOUS waters here is the ULTIMATE fix 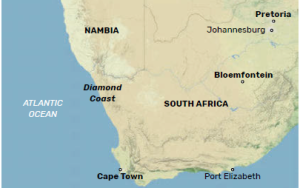 The Diamond Coast stretches northwards along the Northern Cape’s shoreline, all the way to South Africa’s Orange River border with Namibia. The landscape encompasses one of planet Earth’s most uniquely diverse succulent desert biomes, and outdoor adventure lurks around every corner…

“There’s a reason this is called the Diamond Coast”, a guy who knows a guy I know tells me. “It’s the fucking Wild West out there, Bru, so if you’re driving around on a deserted dirt road at night, and you see two vehicles parked in the middle of nowhere, get the hell outta there while you can.”

The scenery unfolds through the windscreen like a sun-bleached landscape from a *Cormac McCarthy novel. Bleak, bad-ass, and minimalist. Every so often, the desolation is punctuated by a double-take inducing snatch of visual mind-games. A Dust-devil dervishes along an infinite fence line. A jaunty scarecrow hangs by the neck from a high pole, as if lynched, with a scrawled sign proclaiming Food. Drinks. Oop — Afrikaans for ‘open’.

Archetypal Northern Cape Province scenery — beautiful and banal in equal measures — unfolds as we cruise the straight-as-an-arrow tarmac strip beyond the town of Koiingnaas. Somewhere above the scrubby mirage line, an elusive horizon quivers, concaving just enough to make you believe you can actually perceive the curvature of the earth.

Through the background drone of Dire Straits, courtesy of ‘Radio without Borders’, a vaguely remembered paragraph from All the Pretty Horses (or maybe it was No Country for Old Men?) ka-chings into my subconscious …

They rode out on the round dais of the earth which alone was dark and no light to it and which carried their figures and bore them up into the swarming stars so that they rode not under but among them and they rode at once jaunty and circumspect, like thieves newly loosed into that dark electric, like young thieves in a glowing orchard, loosely jacketed against the cold and ten thousand worlds for the choosing.

‘If you’re of the calibre of McCarthy, you don’t need punctuation much,’ I muse to myself, the thought manifesting in a mid-Western cowboy drawl. A crackle of static from the two-way radio interjects, and I hear Jake’s voice: “This is the gate.” (Segue to last night, when we tried to wangle access to a surf spot, but got completely stonewalled by security guards patrolling the area’s Chinese-owned mine.)

So, here’s the rub: bad blood has been brewing in this desert hood between the big mining conglomerates and a group of environmental activists, many of them surfers making a last-ditch stand against the extensive, uncontrolled (and often illegal) destruction of the fragile and unique ecosystems along the Northern Cape coast. Protect the West Coast (www.protectthewestcoast.org) is an NGO fighting to expose the devastation.

A media war flared up and has been escalating ever since the clash. The thing is, though, we’re not up here trawling for stories. Or for diamonds or precious metals or heavy minerals. Our hunt is for Stoke¹ and that comes part and parcel with these waters — the rollers, slabs, and grinders that make this stretch of coastline such a legendary surf destination.

The tempestuous West Coast brims with snarling rocks and skulking reefs, all lying in wait to rip at the underbellies of errant vessels navigating the shore. Over centuries, hundreds of ships have been claimed by the dense fog and raging storms, with rusted wrecks littering the coast.

The surfing here is feral and in-your-face, with everything from uncharted point breaks and kelp-strewn ledges to brawny big-wave reefs. I can’t share the secret spots, but check out www.wavescape.co.za for the inside scoop. (Get there early to bank the light off-shore breezes.)

Back to the aforementioned gate, though. A faint Jeep-track sidewinders towards a bay of gunmetal-blue water, where line after line of waves fires left off the point, each peak trailing veils of spray. The gate is chained shut with numerous locks, but our man always has a plan. He ceremoniously fishes out a fist-sized bunch of keys and half a minute later we’re trundling towards the icy Atlantic. We roll to a stop close enough to the ocean to feel the spray whipping off the waves, and it is awesome. (Not as in the contemporary abuse of the word, but rather as in getting sucker-punched by raw and unadulterated awe).

I’ve paddled out into the visceral surge of the Diamond Coast a few times before and, if I’m honest, there have been sketchy moments galore. Snapped leashes, kelp-entangled breath holds where your lungs feel as if they are going to implode, and a solid smack-down on a shallow-water reef next to a rusting shipwreck. But I’ve never faced off against sets of waves as savagely ferocious as these right here. Rearing, swamp-green pit-viper walls — at least 3m high and jacking bigger with each wave — spit foam as they thunder onto the kelp ledges flanking the rocky point.

Heavy lips collapse into a cauldron of under-tow, then shape-shift to re-form and deform a la Tasmania’s infamous Shipstern’s Bluff² — before unleashing relentless walls of white water battering the rocky shore. Anyone caught inside will no doubt be brutally mauled and callously ejaculated (yes, that is the exact word) upon a roiling wall of white water.

I’m kakking³ myself, so I glance over at my mate, PVK. He’s as hardcore as any waterman gets and has gone feral on wild surf sessions up the West Coast for decades. There is zero steely glint to his gaze today, though. The words: “Let’s grab a beer and go check out a couple of spots further along the coast,” have never sounded more like music to my ears …

Another key, another gate, and another sandy 4×4 track lined by botterboom, Boesman’s kers, koekemakranka, and other endemic botanical oddities sees us juddering along the ocean’s edge. I know you get good days here, even though they may be few and far between, and when you do, even mere mortals like me may get to score a few glassy bombs⁴.

Lady Luck smiles on us as we navigate a slight ascent around the apex of an ancient, raised dune. Below us, a crescent bay shifts into foreground focus, and I notice Pete’s hand — with the thumb and pinkie finger extended in the age-old surfer salute — wave out of the bakkie window. We’re on!

The first freezing duck-dive into the Atlantic Ocean is always the worst. You need to be quick and decisive, and power through those lulls that come between the big sets to avoid taking it on the head. Fortunately, the break peters out down the line along a rip, which sweeps us to the backline behind the breaking waves without further incident.

A surfing rule of thumb is that the peaks always seem double the size once you’ve paddled into the take-off zone, and today is no different. Pete hooks into a couple of waves, charging down the line to jubilant whoops from the shore, where the rest of the crew have set up their cameras.

That leaves me, working on the rather complicated relationship I’m forging with my most recent retro stick⁵. (Imagine her, if you will, as one-part lanky catwalk model, one-part ageing Babushka, and two parts pure psychopath.) It’s only my second session and she’s way sleeker than I’m used to, so I end up botching a beaut of a take-off on the first bottom turn.

There’s zero time to overthink options in the zone, though, and with the perfect face of a wave shaping over my shoulder, I paddle as if Sharknado is a real thing. I’m a pretty average surfer, but this time, the planets align, and I hook into the wall with the lip of the wave feathering over my shoulder.

A state of liquid equilibrium snaps into place, with space and time poised in impeccable balance, allowing me to bask in the perfection of this intoxicating desert shore for a few infinite and flawless seconds. And that, my friend, is worth a handful of diamonds in the rough.

Once you harvest that first roller and find the flow, the take-off zone becomes a way more pleasant place. So, we rolled the dice and Lady Luck smiled on us. And kept smiling, gifting us with five consecutive days of non-stop, off-shore bliss, a pretty rare spell along this fickle coast bombarded by robust, deep-ocean swell.

There will always be momentary reality checks here though, when the ocean wilderness bares its teeth, just to make sure you know your place in the pecking order. Our last session in the Namaqua National Park — at a previously un-surfed break according to a ranger we met — I had one such moment.

It’s a wild and arid land, and where the Namaqua desert simmers upon the edge of the Atlantic Ocean, gravel-grinding bike routes abound. The Namaqua National Park is known for its spectacular wildflower displays in spring, and less so for the secret ‘Green Season’ from June to August. Once again, though, I wasn’t there for the flora; it was all about the surf. We’d been riding the rearing and unpredictable face that was exploding off a deep-water pinnacle, when I botched the last wave. Pete had already styled a bomb back to shore and, even though my arms felt utterly blunt, I thought I’d paddle back in for one last ride.

As I sat waiting for the lines of waves to jack, one of the friendly Cape fur seals from the huge colony just up the coast, buzzed under my board. Except, when I looked, it wasn’t a seal, but rather a sizeable and swift-looking, long-finned shark gliding above the blue abyss.

Even though I knew it wasn’t a great white or raggy-toothed shark alarm bells went clanging deep inside my lizard brain, and I surreptitiously pulled my legs onto the board. And when its fin sliced the surface twice circling me, I proned a rambunctious foamy⁶ right onto the rocks in something approaching a Level 10 panic.

Terra firma felt sweet and safe, but the undeniable fact is that this land and adjoining ocean is inextricably intertwined. And that night, as we gazed into the flame-flicker of our beach-side fire, my mind did not dwell on apex predators, but rather on the intoxicating seduction that comes with immersing yourself into the bosom of this infinitely feral space. 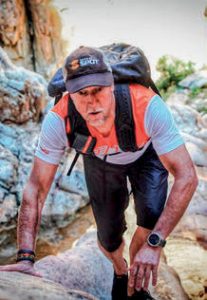 Jacques Marais is a storyteller, poised somewhere in between photographer and author. He is firmly established as one of Africa’s most respected outdoor photojournalists and has covered action sports and adventure destinations on five continents. Marais has authored a dozen-plus outdoor guides and travel books is an award-winning photographer and regularly contributes features to premium publications in South Africa and abroad. Follow him on @jacqmaraisphoto or www.jacquesmarais.co.za