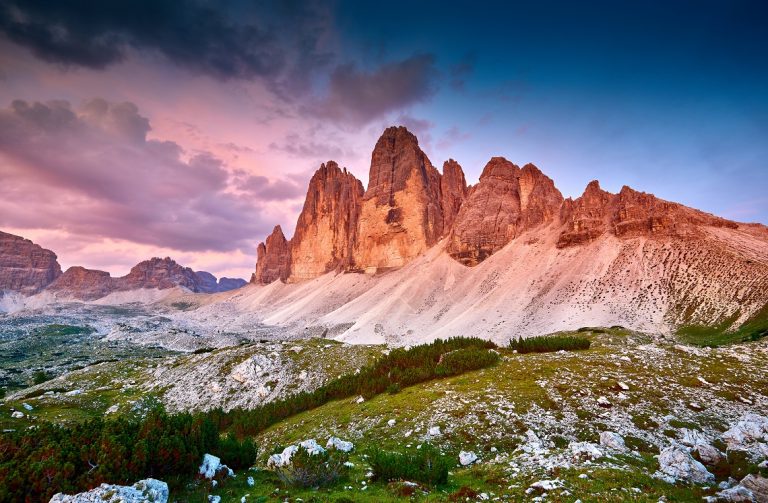 In 2021, ELIA ORIGONI set out to walk the length of ITALY, passing through some of its most BEAUTIFUL regions along the way. Using only PAPER MAPS to navigate and spending the night wherever he laid his SLEEPING BAG, this is his story 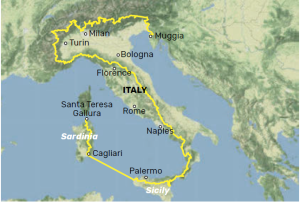 A crashing noise; a colossal boom, like the crack of thunder. Then whiteness. Pure and dazzling white, everywhere. As he came to his senses, all Elia Origoni could see was white. In seconds, a torrent of onrushing snow had engulfed him. After that, Elia remembers nothing. His mind went into auto-pilot as he engaged survival mode. He had been hit by an avalanche.

Elia recalls walking along an old mountain pass just before it happened.

High above towards the peak, a small section of snow still clung stubbornly to the mountain. As an experienced alpine walker, Elia saw the signs of an old avalanche. The sweeping, destructive snowfall that had since settled into a new path. Happy it was safe, he walked on.

When an avalanche hits, reaction times are short.

Carrying a large pack weighing 7kg and walking on snow, Elia had no chance to get out of its way. Fortunately, the snow wasn’t too deep. After some time digging, Elia broke through the surface. The blue sky, a beautiful sight. Over the next few hours, he was able to free himself and summon help. A close call, but not a fatal one.

The avalanche happened on 29th May 2021, while Elia was walking between Tuscany and Emilia-Romagna.

He was four months into an epic journey, the most epic of his life: an attempt to become the first person to walk the entire length of Italy on foot. The path he followed was the Sentiero Italia (Grand Italian Route), a long-distance path connecting Italy, conceived by a group of hiking journalists and the Italian Alpine Club (CAI) in the 1980s.

After 10 days in hospital with a few broken ribs and a bruised, battered body, Elia returned home to recover. Testament to his endurance and drive, he began physio immediately, training with one goal in mind: to finish the walk he’d started.

While his legs survived the avalanche without broken bones, they were severely traumatized after hours, compacted beneath the snow. Six weeks later, he returned to the path. Exactly where the avalanche hit him.

Elia was born among the mountains and it’s clearly where he feels most at home. A mountain guide from Lombardy in the north of Italy, he grew up with the Alps for neighbours; their broken snow-topped peaks never too far away. More than anyone, he understands the risks of high-altitude hiking. These things happen, he muses, when you explore extremes.

Perhaps fittingly, the idea to walk across Italy came to Elia at the end of another very long walk. It was October 2015, and Elia was just about to finish a 1,550-mile trek from Vienna to Genoa. That morning, as the sun began to cascade gold down over the Italian port city, the hulking Alps behind him, Elia looked over the Apennines, Italy’s long, wild backbone extending out before him.

“It was very strange for me. I saw the Apennines, only a few hundred metres beneath my feet. I knew I had to walk them also,” he says. “So, I began to research, and I found the Italian Path (Sentiero Italia), project of the Italian Alpine Club.” 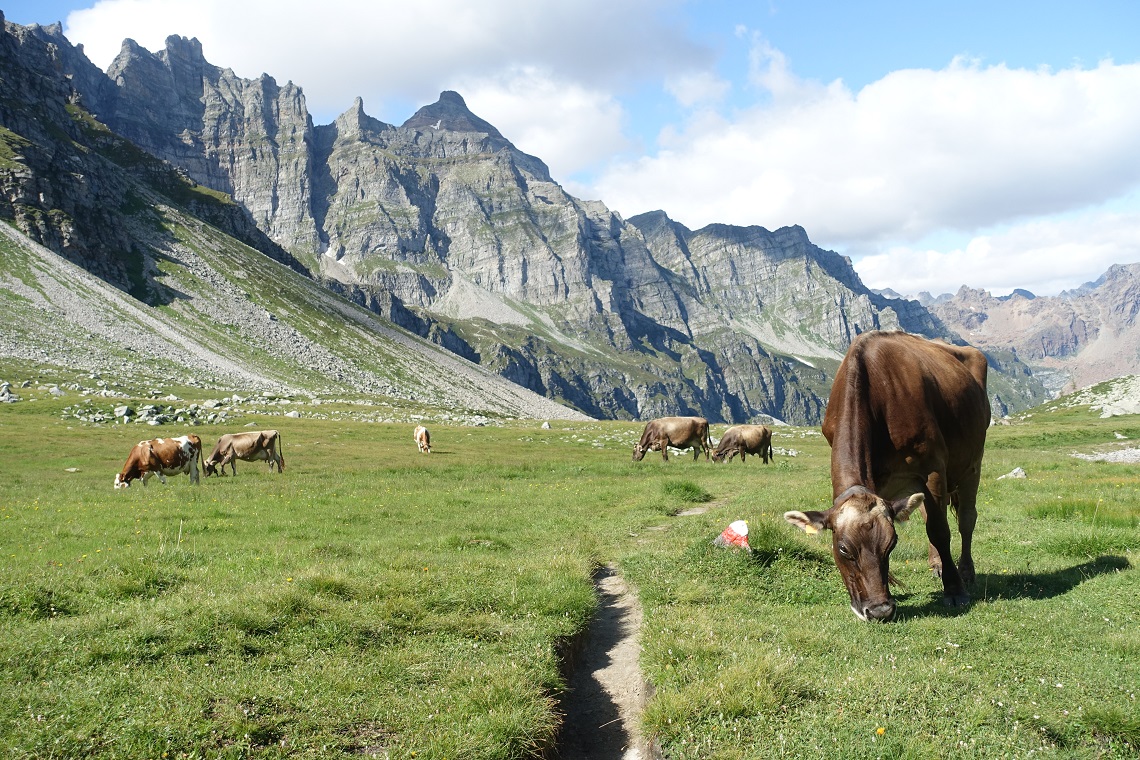 Determined to walk his beautiful homeland end to end, Elia stumbled upon the path at a time when the Italian Alpine Club (CAI) was planning to complete the route and add to it: the Sentiero dei Parchi (Path of the Parks), a new long-distance walking route that will connect all 25 of Italy’s National Parks. A joint venture between the CAI and the Italian Ministry of the Environment, the route will extend the existing Sentiero Italia by 620 miles, stitching together the country’s most beautiful landscapes. The official path won’t be finished until 2033, with large parts of the route still unchartered.

Elia spent the next five years planning his epic adventure.

Armed with stacks of paper military maps, Elia traced his entire route. Later, he’d use the same maps to find his way through the sun-blasted hills of Calabria, the wild mountains of Abruzzo, and the razor peaks of the Dolomites. His goal was to travel light. With only the basics: a tent, a small cooking stove, the necessary clothing, and a GPS locator for safety — later, he would use this to signal for help after the avalanche. Seeking solitude and escape from technology and phone signal, he wanted to walk the old way.

In February 2021, Elia set off. Beginning in Santa Teresa Gallura, a small fishing port at the northern tip of Sardinia, and finishing in Muggia, a tiny town in the far north-eastern region of Friuli Venezia Giulia, he started walking. Sometimes for 28 miles a day.

Even after all the mind-blowing statistics, and the fact that he survived an avalanche. Elia’s most impressive — and dangerous — feat didn’t involve walking at all. Look at a map and you’ll quickly see that Italy isn’t one solid landmass. Two of its regions are islands: Sardinia and Sicily. For someone hoping to travel the entire country under their own steam, using only analogue methods of navigation, that poses something of a challenge.

Not one to do things by halves, Elia devised a plan. A fairly insane plan, but a plan all the same. To keep his carbon footprint to a minimum, the 31-year-old would row the 250-mile stretch in a custom-made rowing boat. Besides a few months of training with a local rowing club, Elia had never done anything like this before.

For four days and four nights straight Elia rowed, pulling against the might of the Mediterranean, churning up its waters in search of Sicily. Three hours of rowing, followed by one hour to rest and eat, Elia slipped into the mindset of an ultra-marathon runner. Focused, exhausted, slightly deranged. 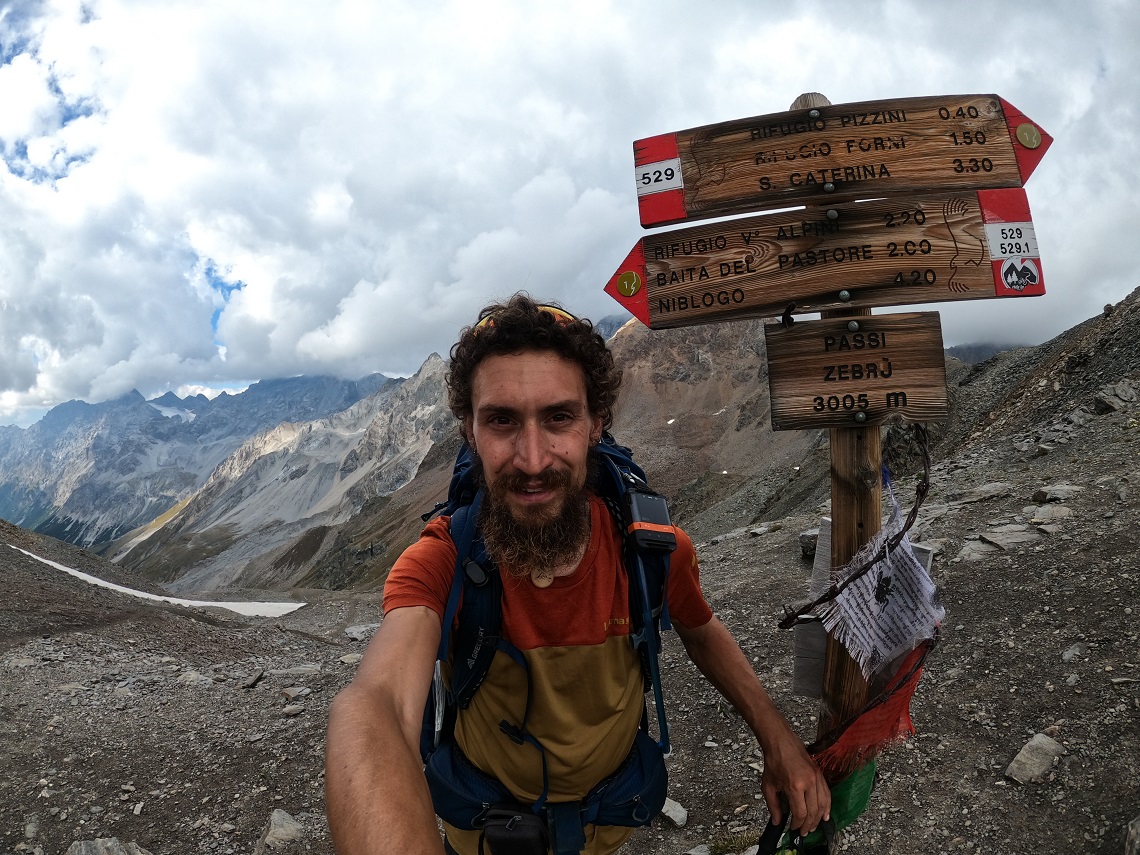 For 100 hours straight, he battled waves that sometimes reached higher than 2m around him, fighting against the elements to stay on course and beat the bad weather he knew was imminent.

There were moments of the sublime among the suffering, though. Elia recalls the sky, the stars clearer than anything he’d ever seen on a mountain top, on his last evening at sea; the first sight of Sicily, lights throbbing in the darkness; a pod of dolphins swimming around his boat.

After a few days of recovery at Trapani, Elia set out walking once again. He’d take to the sea one more time, covering the 1.5-mile Strait of Messina in a rowing boat lent to him by a local club. After that, he walked. From the toe of Italy in Calabria, through the wild mountains of Abruzzo, and the famous rolling hills of Tuscany; atop the cliffs of the Cinque Terre, among the Alps in Piedmont and Lombardy.

In total, Elia walked almost 4,350 miles, covering 19 of Italy’s 20 regions, and climbing a knee-shuddering 350,000m of total ascent. Apart from his recovery after the avalanche, the route took him just six and half months to complete.

In that time, he walked every day, in every kind of weather; from blazing heat to driving rain, through flood-ravaged valleys and sweeping meadows; across snow-capped mountain ranges and sun-scorched farmland. He saw Sicily blanketed in snow. Spent nights alone in Abruzzo, Italy’s bear country. In the Alps, Dolomites, and Apennines, he witnessed incredible mountain panoramas, too many to count.

But for Elia, the most beautiful thing about his adventure wasn’t Italy’s glorious landscapes — it was the hospitality of its people. Time and time again, from the villages of Sardinia to the heights of the Alps, people opened their homes to Elia.

In Sicily, after a long day of grey skies and unforgiving rain, one old farmer welcomed Elia in from the damp, miserable conditions with a loin steak and wine. Another man, in some remote part of rural Sardinia, insisted Elia join his family for pasta as he searched the countryside for a spot to pitch his tent.

“It was very beautiful. Many people said to me ‘Oh, if you want to tonight, you can sleep in my house; we can cook and eat something together’. It was very, very nice. In Sicily, Sardinia, and Calabria, this happened a lot of times.”

Of course, all good things must come to an end. “It’s a strange situation. In the days and months leading up to it, you are dreaming of this day. The day you arrive and finish the adventure,” says Elia.

But the feeling is bittersweet.“The last day is not the most beautiful day. It is all the days you have lived before,” he says. 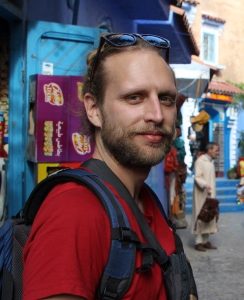 Bred in Yorkshire, based in Milan, Joey Tyson is a freelance travel writer and editor. He likes to visit new places, see what they are like, and write about them. Recent adventures have taken him to Ethiopia’s vast highlands, through the sprawling Souks of Fez, and on a date with a family of mountain gorillas in southwest Uganda.