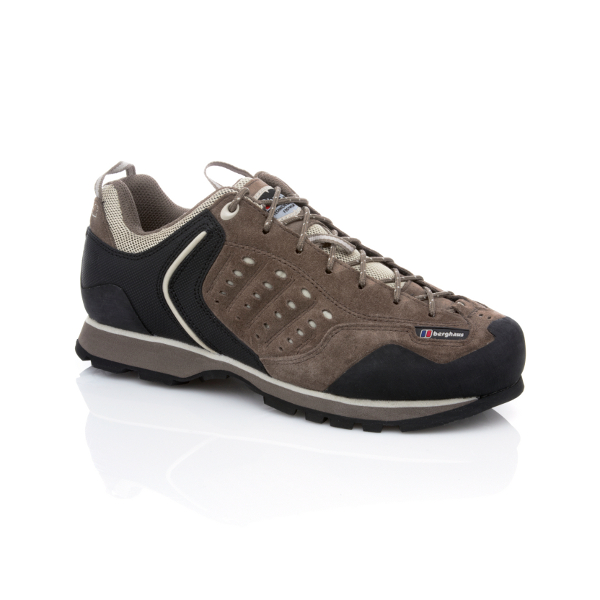 This interesting-looking shoe is the most technical we have on test – Berghaus suggests it can be used for scrambling and easy bouldering, and I’d definitely add via ferrata-ing to that list too. Its sole is very rigid, and the toe is so solid it doesn’t hurt if you jam it on to a rock. The Cuesta II is similar to a climbing shoe in its looks, because of its lacing and the low rand backed up by protective rubber on the heel and toe, designed to give better fit and extra protection. For me the shoe’s appearance took a bit of getting used to, but now I like it as something a bit different from the norm (don’t all the others on test look the same?) – especially as the test one is cream with pink laces, far nicer than the one pictured.

The sole is made from Berghaus’s Opti-Stud grip system, featuring large studs to take the high force of impact and smaller ones for extra grip, and it’s really grippy. The laces are far thinner than on any of the other shoes on test, which means they criss-cross more times, allowing you to adjust them in lots of places to give the shoe the best fit. This thin-ness makes them a bit fiddly but you get used to it quickly; the lace holes aren’t reinforced so I’d be interested to see how they hold up over time. The whole shoe feels well padded, and whatever Berghaus has done to the mid-sole seems to give me a literal spring in my step even though the shoe’s quite heavy (426g for one in size 6.5).

So the only problem I have with the Cuesta II is that it isn’t waterproof. Whether or not that’s important to you comes down to what you want to use the shoe for. While I’m not likely to go scrambling or via ferrata-ing when it’s wet, I wouldn’t spend £75 on a shoe that I couldn’t wear hiking in wet conditions – or around town in the rain for that matter. But if you’re after a shoe for rock action and hiking in mostly dry conditions, this is a great one at a great price.

Great technical shoe that can even be used for bouldering at a great price.