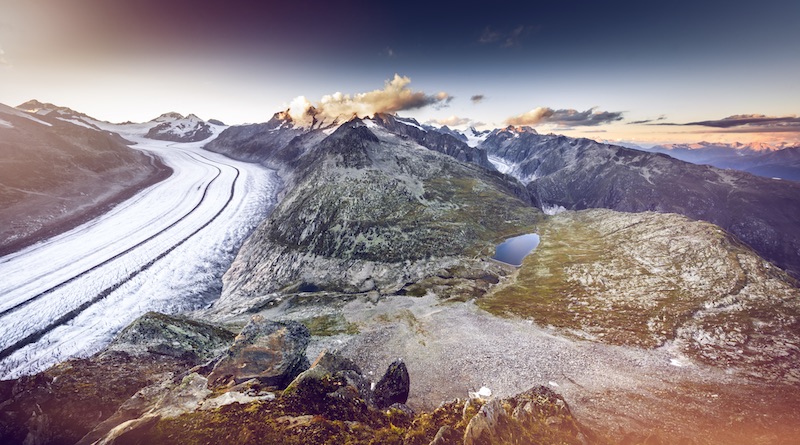 5 of the best hikes in Valais, Switzerland

The Valais region is a land of contrasts that straddles the Rhône on its journey to Lake Geneva. In the valley’s fertile bed, orchards of apple, pear and apricot flourish while its lower hillsides are terraced with vines. In summer, the climate is almost Mediterranean, but the upper valleys are hemmed in by snowy peaks and hanging glaciers – the arctic giants of the Alps.

This is quintessential Switzerland; home of the Matterhorn and the Monte Rosa Massif, of Raclette in candle-lit restaurants, dark timber chalets and hay barns perched on staddle stones. It’s a paradise for the walker, skier and mountaineer, with hundreds of trails to explore.

This multi-day tour has it all: exciting balcony trails, pass crossings, a variety of Swiss Alpine Club (SAC) mountain huts, the likelihood of spotting wildlife, and breathtaking scenery on every stage. The trek has a tough beginning though, with a 1,600m climb from Le Châble to reach Cabane du Mont-Fort. It’s a demanding first stage, but a night at Mont-Fort is worth every upward step taken to get there, for the hut’s outlook is second to none, with sunset views to Mont Blanc that will remain with you for life. However, a less strenuous way to gain Mont-Fort involves riding a cable car, followed by a relatively short walk that will leave you with plenty of energy for tomorrow. And no-one will blame you for taking the easy way!

With the beautiful Combin Massif on show almost from the start, stage two passes through a landscape that both chamois and ibexes call home, grazing unconcerned by hikers in the Haut Val de Bagnes, the second largest nature reserve in Switzerland. Then it’s down to Lac de Louvie and another mountain refuge in a charming location (the Cabane de Louvie), should you fancy a short day, that is. Otherwise, continue high above Val de Bagnes before descending to Mauvoisin for a night in a hotel.

Passing beyond Lac de Mauvoisin on the next stage, you enter an untamed region full of rugged charm in which Cabane de Chanrion nestles at the valley head below the Italian border. The fourth stage returns towards Mauvoisin, but on the other side of the valley. It’s a scenic rollercoaster of a trail that eventually twists uphill to gain Col des Otanes, from where the Grand Combin is almost near enough to touch. Standing on a moraine bank 200m below the col, Cabane FXB Panossière offers the ultimate room with a view, sumptuous food and local wine to restore flagging energy.

Stage five skirts below the long tongue of the Corbassière Glacier, then heads uphill into a sparsely-populated district where refreshments can be had at the privately-owned Cabane Brunet, leaving an afternoon’s climb to Col de Mille, on the other side of which stands the homely Cabane de Mille just a few strides from the pass. This part of the hike will take you over the Passerelle de Corbassière, a beautifully exposed walkway with first-class views of the glacier.

The Tour of Val de Bagnes concludes by crossing the easy summit of Mont Brulé, followed by a splendid ridge walk with yet more exciting views, before plunging down to Le Châble, where it all began.

Tour of the Dents du Midi

The spiky crest of the Dents du Midi dominates the Lake Geneva skyline. Encircling this compact massif of seven soaring summits is one of the oldest hiking tours in the Alps.  Suitable for most hikers, with accommodation in mountain huts along the way, this splendid trek is generally accessed from the villages of Champéry or Mex.

The magic begins even before you set foot on the trail, in the shadow of these majestic, waterfall-streaked peaks which rise abruptly out of grassy foothills. Along the trail, you’ll meander through dappled forests and flowering hillsides, skirting lakes and gaining new panoramic views each day. The trail is ever-changing, from the demanding path up the Col du Jorat to the verdant Chindonne nature preserve and the dizzying Pas d’Encel, a steep-sided ravine safeguarded by cables and chains.

This is the most difficult section of the tour, but the quaint Susanfe refuge nearby provides a haven of much-needed refreshments and a cosy bed for the night. Looming above Susanfe is the Haute Cime, the highest of the Dents at 3,257m. Down a steep slope of scree, the Col de Susanfe offers breathtaking views over the turquoise waters of the Lac de Salanfe and its own tidy Auberge. 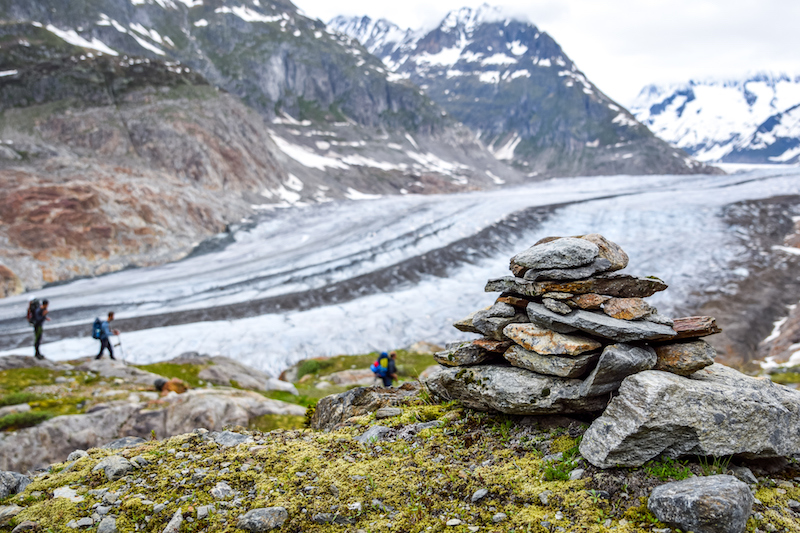 The Aletsch Glacier is an impressive sight. A multi-striped highway of ice born among snowfields ‘behind’ the Jungfrau, it’s the longest glacier in all the Alps and is also a UNESCO World Heritage Site. Curving among steep-walled mountains, it terminates below the Aletschwald, a nature reserve containing some of Switzerland’s oldest living trees. Visitors to Bettmeralp, Riederalp or Fiescheralp have access to vantage points from which to admire this amazing scene, while a full day’s walk gives an opportunity to study it from close quarters.

Fiescheralp is perhaps the best place to begin, for a broad track contours round the hillside, and after crossing a spur it reveals an enticing view of Finsteraarhorn, Wannenhorn and Fiescherhorn above the Fiescher Glacier. The distant Eiger also makes its presence known.

Emerging from a tunnel half a mile wide, Gletscherstube Märjela is seen overlooking the shallow pools and streams that create the Märjelensee. A few minutes later the Aletsch Glacier appears in all its frozen splendour; it’s a view to stop you in your tracks. A spectacular path now climbs, before easing along the moraine crest above the glacier, teasing towards a distant ridge from where a backward view shows the Aletsch Glacier at its very best, while below lies the Bettmeralp plateau and the end of the walk.

The route from Le Chargeur, below the massive Grande Dixence barrage, to the mountaineering centre of Arolla is one of the classic walks of the Valais region. Moderately demanding, it rewards every step, so choose a day of settled weather, take a packed lunch and plenty to drink, and go for it.

Take the bus to Le Chargeur, then ride the cableway to the top of the dam wall, where a very different world is suddenly revealed. The sparkling waters of Lac des Dix stretch into the distance while open pastures reside to the right and Mont Blanc de Cheilon and Pigne d’Arolla stand tall ahead. Now a farm track seduces along the side of the lake, while marmots whistle and cowbells drown the cry of alpine choughs. At the far end of the lake, follow a path onto a moraine wall and when it forks, slant down to the left to cross the stream flowing from the fast-shrinking Cheilon Glacier, before continuing up-valley into an increasingly rugged landscape.

Col de Riedmatten and the Pas de Chèvres provide alternative ways to cross the rocky wall on your left. Riedmatten is straightforward but steep, while the Pas de Chèvres is gained by a series of ladders. Both emerge to a wonderland of big mountains and glaciers, and the path to Arolla takes you into it. Be sure to take your time here and enjoy what nature created – this is an experience you’ll want to remember for a long time.

Val d’Anniviers has been hailed as the grandest or greatest of all valleys of the Pennine Alps of canton Valais, and we can certainly see why that would be the case. Beyond Zinal, the last village, it opens to a great amphitheatre rimmed by 4,000m giants, snow-spattered and with glaciers at their feet – including the Weisshorn, Zinalrothorn, Obergabelhorn and Dent Blanche. With such majestic peaks in close proximity, it’s hard not to stare up at them and imagine being one of the mountaineers that come to tackle such challenges throughout summer. Facing west, the Weisshorn heads its own cirque, in which lies Alp Arpitettaz (the ‘little alp’) with an SAC hut above it on one of the most sublime sites in all the Alps.

South of Zinal, the hut approach cuts through meadows of the Plats de la Lé, continues below a waterfall, then crosses a glacial torrent before working its way up a slope of lush vegetation to reach the few buildings of the Arpitettaz alp. Nearby, the little Lac d’Arpitettaz is the answer to a photographer’s dream, acting as a mirror to turn the Dent Blanche and Grand Cornier on their heads. If you’re a budding photographer, you’ll be in dreamland. In fact, you’ll probably have your camera in hand for much of the hiking here, but don’t forget to take time to truly immerse yourself in the spectacular scenery and enjoy the fresh mountain air.

The way then enters the Arpitetta cirque, with views growing more impressive with every step, where huge mountains hung with billowing glaciers bemuse the senses. And it is within this exciting landscape that you’ll find Cabane d’Arpitettaz above a prow of rock and grass. It’s the perfect place to relax, soak the beauty in and look back on a fantastic day of hiking.