How to choose the right cycle touring bike

Choosing the right bike for your cycle tour is probably a more important decision than what to name your first born child. I discovered this when I went on a month long cycle tour around Europe, where I somehow managed to travel 1,000 miles in the saddle and 2,000 miles by train, if you choose the wrong bike your tour could end up being ruined.

There are so many choices on the market, and trying to figure out if you should get a cheaper, but heavier mountain bike and convert it, or splash the cash on a bike that is specifically designed with cycle touring in mind is a hard choice.

Thankfully, I made a good decision when choosing the bike I used. I opted for the Dawes Galaxy, a lightweight touring/road bike that has been around since the 1970’s and has earned its place in the touring hall of fame.

One thing I found when I was racking my brain, was that choosing a touring bike can be a right headache if you don’t know what you’re looking for. But I’ve done my homework and I’m here to take you through the age old question, ‘what bike should I use for my cycle tour?’.

When buying a bike for touring there are some things that you have to take into consideration. All of these factors will affect how successful your adventure is, and ultimately how much you will enjoy it:

So with that said, what features should you look for when buying a touring bike? The most important feature, for obvious reasons, is comfort. Secondly, a touring bike should be chosen on its carrying capacity and whether you can fit pannier racks onto the frame. Clearance on the frame to fit wider tyres is always helpful and a long wheel base for loaded stability prevents you from kicking your panniers every time you pedal.

As previously said, there are no set bikes for touring, while some bikes are tourers by name it is not essential that you use one of these, people have cycled across continents on tandems, recumbents and even penny-farthings. When it comes to choosing a bike the obvious and usual choice is between a mountain bike, and a touring bike.

As the name implies these bikes are specifically built for touring and allow space for pannier racks to be attached, they will most likely have mudguards installed, and the wheel base will be long. Touring bikes are however, built for carrying light loads at fast speeds, the lightweight frames lack the carrying capacity of the more heavyweight durable styles, and are harder to replace if they break. Touring bikes often come with drop handlebars which allow for more riding positions than the conventional straight handlebars, but they become impractical over difficult terrain and when you have heavy loads. Tyres on touring bikes are usually thin road tyres, which are great on tarmac and offer you increased efficiency and speed, but if you want to venture off the beaten track they will become a nightmare.

In a line: If you want to travel light and fast, a touring bike is for you.

When it comes to mountain bikes, speed is sacrificed for carrying capacity and comfort. The handlebars are more usable and practical than drop handlebars, allowing for better control on rough terrain and the gearing allows for easier hill climbs. Brakes are a lot stronger and better suited for stopping and controlling a fully loaded bike on long, steep downhill sections i.e. Alpine passes, and a stronger frame will ensure that you can carry the heaviest loads.

When picking out a mountain bike for your tour, you should avoid choosing models with rear suspension, not because the suspension absorbs your pedalling power (you can usually turn suspension off) but because it then becomes very difficult to mount a rear pannier rack. Make sure when buying that the bike has space to mount racks. Knobbly tires should be replaced by more efficient road tyres, but you should be wary that mountain bike wheel frames are lighter and therefore not as strong as those on touring bikes.

In a line: Choose and adapt a mountain bike if you are a heavyweight traveller who likes to venture off the roads. 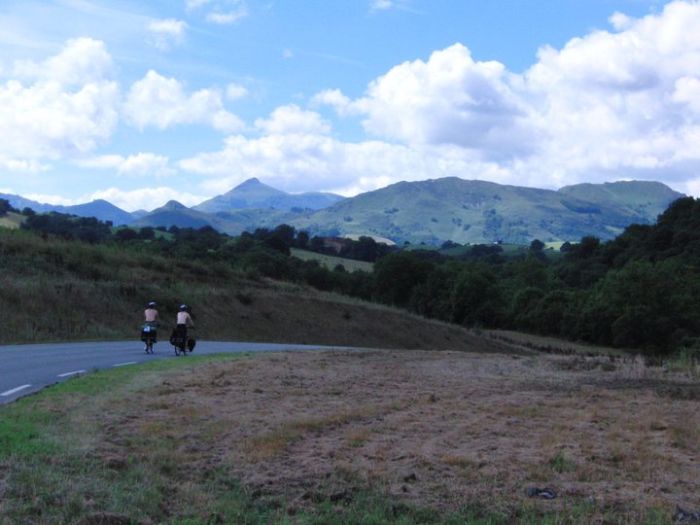 When it comes to choosing the type of bike for you it really does come down to what type of tour you are going to be doing. Converting a mountain bike so it is tour ready will save you some money, and it will help you get to know the ins and outs of your bike before you head off on your adventure. Touring bikes come out on top if you are a lightweight traveller, and they are purpose built to carry panniers, while mountain bikes with their shorter frames could prove extremely annoying when you find yourself hitting your foot on your bags at every pedal rotation.