How many times have you been attempting a squat pee, perhaps with mountain-bike weary legs on a wet, slippery forest floor, trying to avoid being bitten on the bum by whatever fanged creature is waiting below, and thought ‘I wish I were a man’? Or had to use loos that have made you gag? A friend and I had this discussion recently, and as well as sharing endless horror stories, we realised we’d both stupidly developed a skill of drinking just enough water so we didn’t have to pee more than necessary, dicing with dehydration and our health.

The answer to our pee-like-a-man dreams are weeing devices – or Female Urination Devices (FUDs) – funnel shaped pieces of plastic that allow women to urinate standing up and without removing clothes. We found three types: Shewee, GoGirl and Whiz freedom.

They all have similarities – they’re reusable, washable, liquid repellent and claim reams of uses such as camping, trekking, climbing, sailing, traffic jams, when women find themselves with unsanitary toilets or without one at all. But each one looks slightly different and all have patented designs. So which one, if any, is the best? We tried the lot.

Each manufacturer must know that our trials wouldn’t be without errors because all three came with advice to practise in the shower first. The shower trial was a good idea but getting an FUD into unzipped trousers and seeing if we could aim successfully into the loo without showing any bottom or without peeing on ourselves was a more practical test, we thought, of how it might work outdoors.

So after mastering the shower test, we recommend the pants test too before putting any of the FUDs into full field use. Oh and by the way, it’s a good idea to keep a mop and bucket handy… and perhaps an empty washing machine. All three work, but you have to get the knack, and there’s a different knack to each one…

Shewee’s small, narrow design made us both nervous to begin with. However, despite its narrow look, it had the best flow-through of all three and we both got the knack after a couple goes. Made from hard plastic, the Shewee is the stiffy of the pack, so it isn’t difficult to pee with unzipped pants and underwear pressing against it. But be aware that the knack with this one is holding it away from your body slightly at the top and it goes horribly wrong if you don’t. You’ll also need to remove it with toilet tissue to catch the drips.
Score: 6/10
£7.70 www.shewee.com 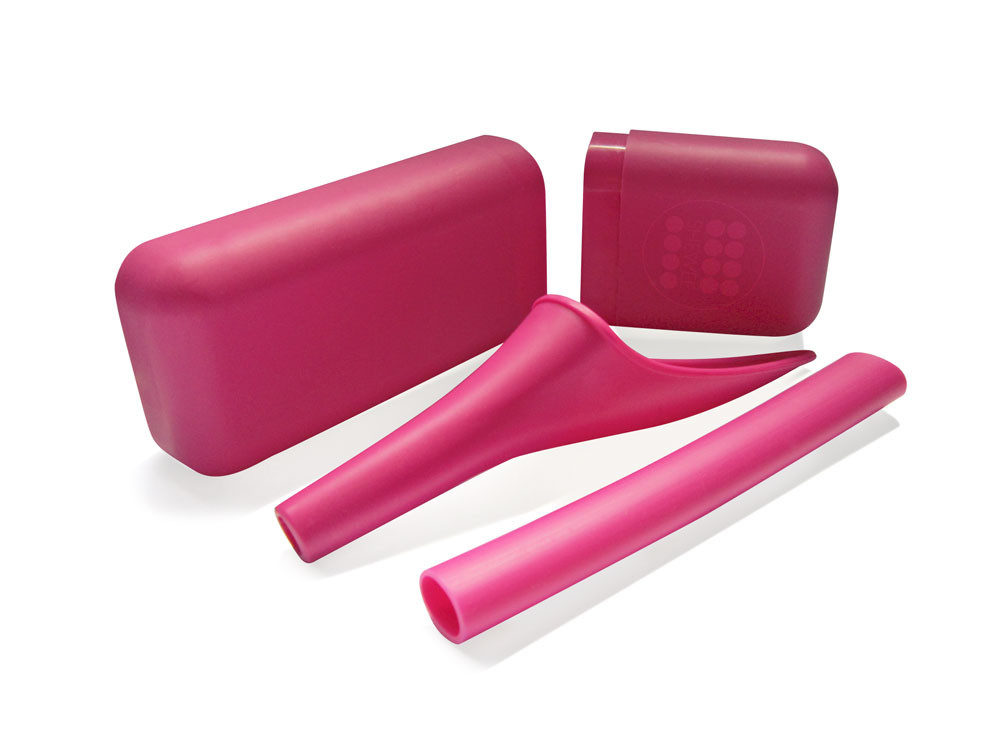 The GoGirl is a bigger unit which raised an eyebrow when it popped out of its packaging and sprung into shape. Made from flexible medical grade silicone this softer FUD boasts the most reuses and (say its designers) a unique non-drip design, which means no wiping. It worked, but it took the most goes to get the all-important not-too-hard not-too-soft seal against the body. We could only get it to work by showing some bottom because it was too floppy to pee with underwear and unzipped pants pressing against it. Despite the large funnel, it had the poorest flow of the three so some control would be required for the larger pees to prevent spillage. In this case durability doesn’t win over usability; it just wasn’t hard enough for us.
Score: 4/10
£9.99, www.go-girl.com (www.go-girl-uk.com for the UK). 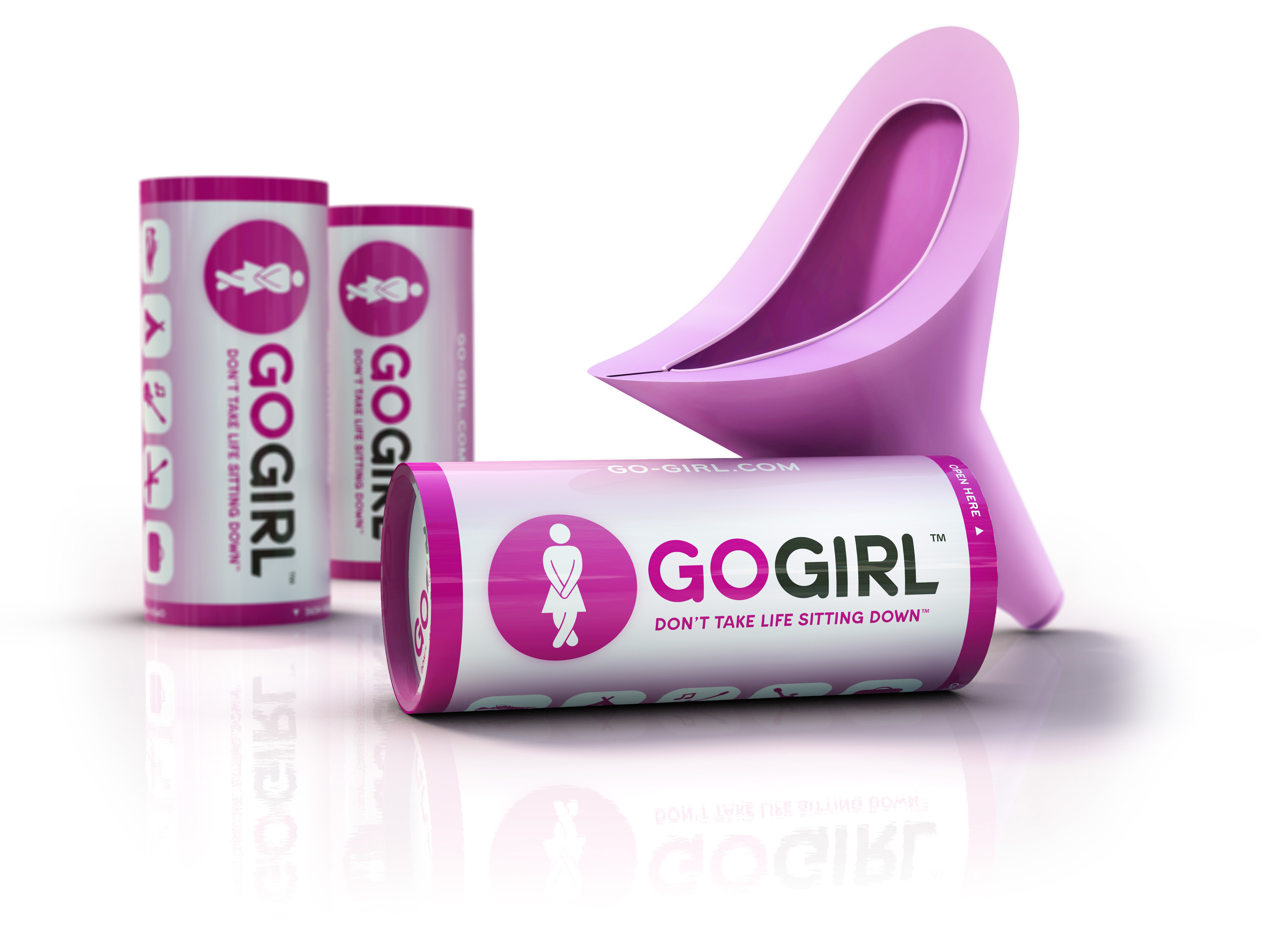 The Whiz freedom is much stiffer than the GoGirl but still a bit flexible which made it easier to get the all-important body seal just right. It worked first time in the shower and first time with pants. Even though the plastic is flexible, it was still firm enough pee with underwear and unzipped pants pressing against it without the seal being breached. The flow didn’t quite match the Shewee, but it still coped with the bigger whizzes. This not-too-hard not-too-soft option just needed a bit of a man shake for drip-free removal and was the clear winner for us.
Score: 9/10
£9.99, www.whizproducts.co.uk 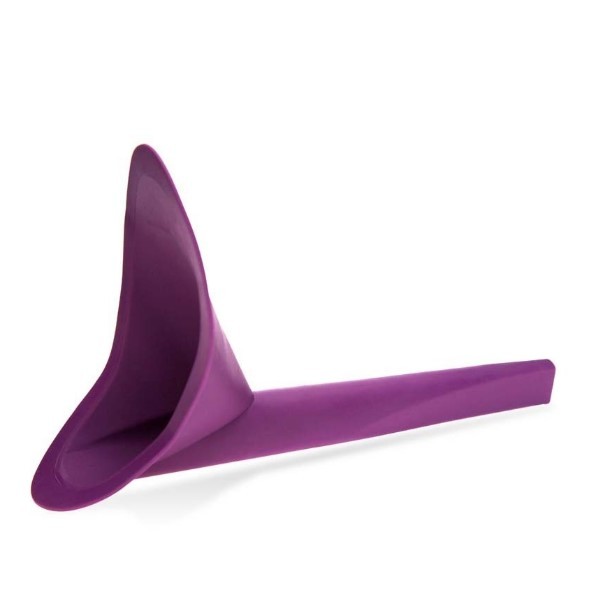