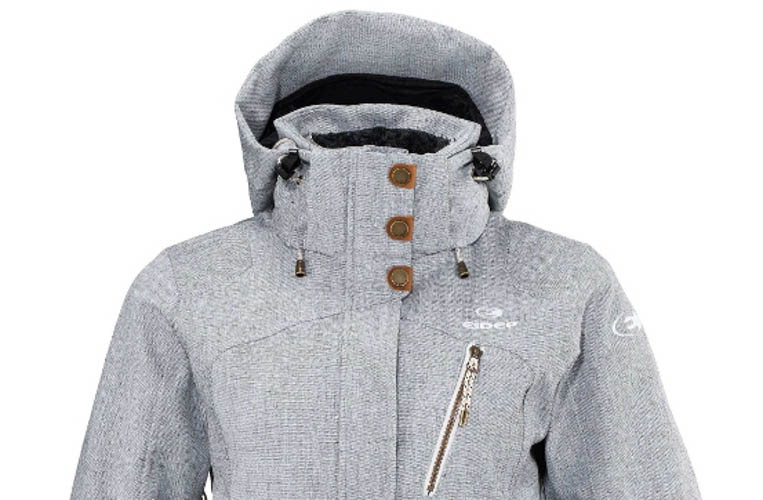 The Eider Red Square Jacket is endlessly stylish and seriously heavyweight. So how does it perform on the slopes? Find out in our full review.

Two things are instantly striking about the Red Square Jacket from Eider – one, its super chic and endlessly trendy looks, and two, its seriously heavy weight. When I first picked it up I thought it must be a man’s product it was so heavy. Once on the jacket doesn’t feel too restrictive though, and its insulation will save you a layer underneath.

French ski brand Eider began life in the French Alps over 50 years ago. The Red Square is part of its new range this season called the Cross Over range, aimed at people who want to wear their ski gear in an urban environment but find that the typical bright colours don’t fit in. I wouldn’t only feel happy wearing the coat around town and to the pub, it’s almost smart enough to wear for business meetings. But that’s enough about the looks – let’s see how good it is on the slopes.

The Red Square Jacket uses Eider’s two-layer Defender fabric, which is waterproof, windproof, stretchy and breathable. For insulation it uses the company’s Thermal Control System, which uses body mapping to work out how much insulation and padding to put on which parts of the body. There’s a down panel on the back, for extra warmth there, and the rest of the jacket uses Eider’s regular synthetic insulation.

The jacket’s hood is removable via heavy-duty poppers and a zip for the days you don’t need it; the remaining fleece-lined collar will still provide lots of warmth at the neck but on me it was very tight. There’s lots of space in the hood, although it won’t comfortable fit over a helmet, and the peak isn’t particularly stiff so it will struggle in strong winds and snow.

Pocket-wise there are seven: two large, fleece-lined handwarmers at the front; an external chest pocket with a water-resistant zip and an internal fleece-lined one, plus the standard lift pass holder under a smart flap on the left wrist. Then there’s an extra small pocket on the back of the jacket – I’m not sure if this is for anything in particular, but it’s skiing – you can never have too many pockets. And finally there’s a discreet mesh pocket on the inside for goggles, with a goggle wipe in it.

Other features include a removable snow skirt with a nonslip band, wrist gaiters to stop the snow from going up your sleeves and mesh-lined zips under the arms for ventilation. The zips all have large, trendy zip pulls to make them easy to use with gloves; the main zip is two-way with a large storm flap in front of it. The jacket can be adjusted at the hem with easy-to-use toggles, and via poppers on the outside, which are useful and add to the looks. On the other hand the sleeves are only adjustable by poppers, which might mean you can’t get them to fit as well as you’d like.

In conclusion, this is a seriously warm, seriously fashionable coat. If you’re the sort of person who’s in the queue for the first lift and like to ski hard in all conditions, this might not be the jacket for you. If you want a jacket that will do the job on the slopes but also looks the part in the bar, and around town at home (and you don’t mind its weight), it’s a cracker. Stylish skiing starts here.

Scruffs Speaker Hoodie review
The ultimate adventure Christmas Gift Guide
5 of the best men's insulated jackets on the market
Type to search or hit ESC to close
We use cookies to ensure that we give you the best experience on our website. If you continue to use this site we will assume that you are happy with it.OkRead more