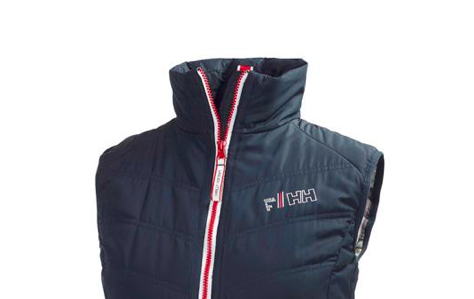 Helly Hansen describes the HP Vest as a ‘summer weight’ jacket that’s great for keeping warm when the sun sets or when the wind gets chilly, so it’s not going to be the warmest as we head into winter. But still, for milder days, or as a mid-layer, it offers extra insulation to the body’s core.

Before we get down to business I’ll have to comment on the looks, as this is easily the most interesting-looking gilet we have on test. It comes in sky blue, navy blue or white, and both the sky blue and the navy (and my test version is navy) have bright red-and-white zips down the front. There’s also a big USA theme, with the words ‘USA 32° North’ sewn into the back and ‘USA’ and some numbers next to the Helly Hansen logo. Inside the lining is plaid, which will look retro and cool to some people and like a tablecloth to others. I’m still unsure, but either way, it’s nice to see a gilet looking a bit different.

The HP Vest is a synthetic jacket using PrimaLoft’s Warmcore – an insulation developed by PrimaLoft in conjunction with Helly Hansen for the brand’s sole use. Warmcore is warm and light, using micro-fibres to trap heat. Synthetic insulation performs better than down in wet conditions, and the gilet is also treated with a Durable Water Repellent to offer extra protection against the rain. 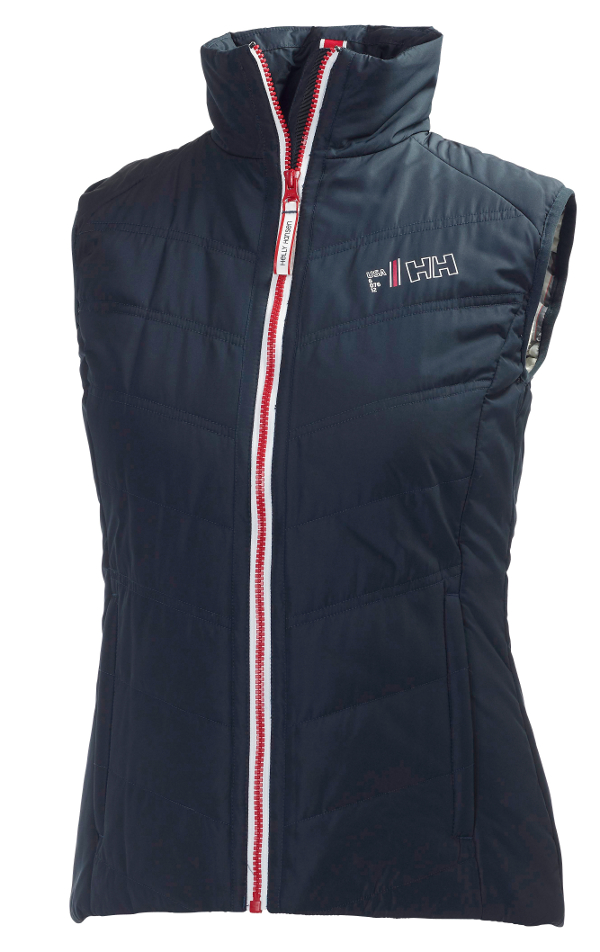 The jacket is fairly fitted and when worn over a baselayer and a fleece felt a little restrictive, especially at the arms. But over just a baselayer it’s fine. The plus side of this is that it’s sleek and it certainly wouldn’t be a problem to wear it under another layer. It’s not the most compressible compared to others on test but it’s still not going to take up too much space, it weighs just 302g in a size M.

The HP Vest has two large handwarmer pockets with red and white tags on the zips to make them easier to use. There’s no extra pocket for valuables though, which for me is always an omission. There’s a high collar for extra warmth at the neck and a chin guard behind the zip to stop it from rubbing there.

The looks will be a huge influence on whether or not this gilet is for you – if you like them, it’s a nice gilet for mild conditions, or a mid-layer for colder ones.