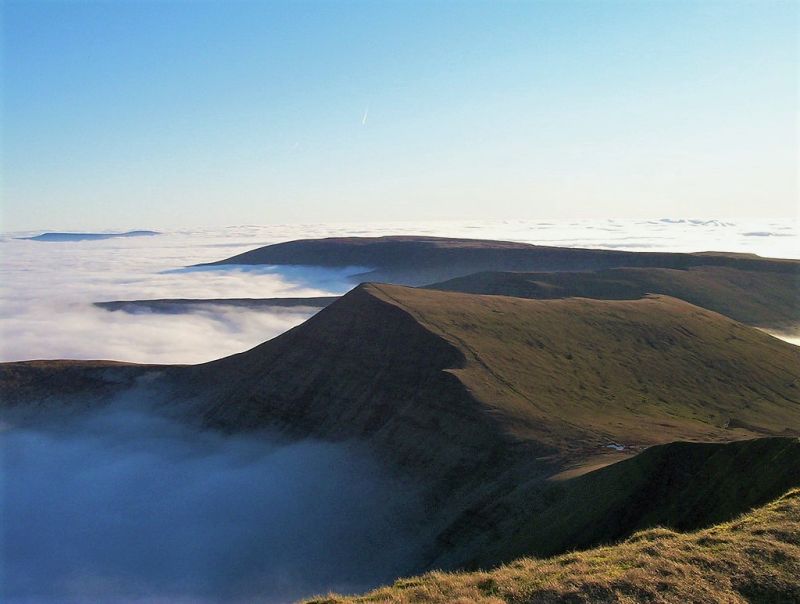 Pen y Fan: Everything you need to know about hiking this popular peak

Deep within the south of Wales lies the sensational Brecon Beacons National Park, which is home to 520-square miles of diverse Welsh landscape and the area’s highest mountain, Pen y Fan.

Offering mountain plateaus of grass and heather, waterfalls and verdant valleys and a green, rural woodland landscape, this is some of the country’s finest scenery. This mountain range lures in thousands of hikers every year to test the daring summits and adventurous treks in hope of achieving the prestigious views of the Brecon Beacons’ highest peaks.

Bang in the heart of this charming national park, and standing proud as the tallest peak, Pen y Fan measures 886m above sea level. This summit, marked by a well-preserved Bronze Age cairn, is the coveted accolade that pulls in hikers eager to test the multiple routes up and around the mountain.

Pen y Fan is a top choice in the Brecon Beacons, and is one of the most popular hikes in Wales alone, but with views of the Bristol Channel, Gower Peninsular and the Cambrian Mountains – who can really argue as to why it shouldn’t be?

As with any exciting mountain, there’s more to it than just the climb. So, here at Wired For Adventure, we have put together the perfect guide for you to master three different routes, whilst knowing every nook and cranny of this desirable peak. After reading this, you’ll want to pack your backpack and set the sat nav to south Wales as Pen y Fan awaits… 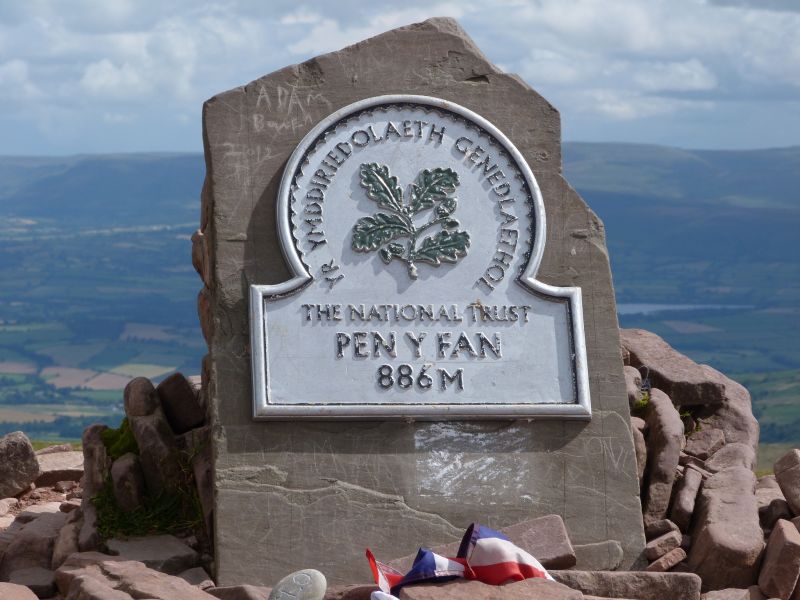 Main track – the walk from the Storey Arms 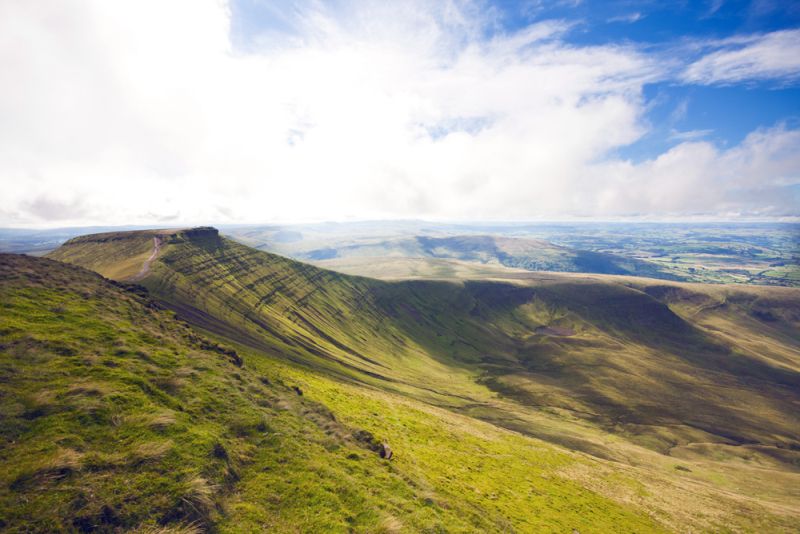 Definitely the most popular route on the mountain, the walk from the Storey Arms is the ideal and easiest option for anyone that just wants to get up and down. The trek involves a long, gradual ascent, and is often known as the motorway route, with thousands piling up to the summit all year round.

Beginning with a slow uphill ascent past the forestry plantation, the winding footpath soon leads you down to the crossing of Blaen Taf Fawr. You can either cross the bridge or opt for an exciting river crossing, aiming for the stepping stones that lead the way.

After your river escapade, it’s slow and steady until you reach the main ridge that leads you along the final 130m up to Pen y Fan’s neighbour, Corn Du. Once you hit the pinnacle of Pen y Fan, on a clear day, you’ll be met with the distant outlines of the Cambrian and Black Mountains, daydreaming away from the summit you’re stood upon.

As they always say, going up is harder than going down, and this route has a very simple, marked descent to take you back to square one on the same path.

Discover more hikes and climbs in the UK with a membership to the Wired For Adventure Digital Library. With over 140 issues worth of UK routes, weekend adventure ideas, and itineraries, it’s the perfect tool to help you plan your get aways. Find out how you can get your membership here. 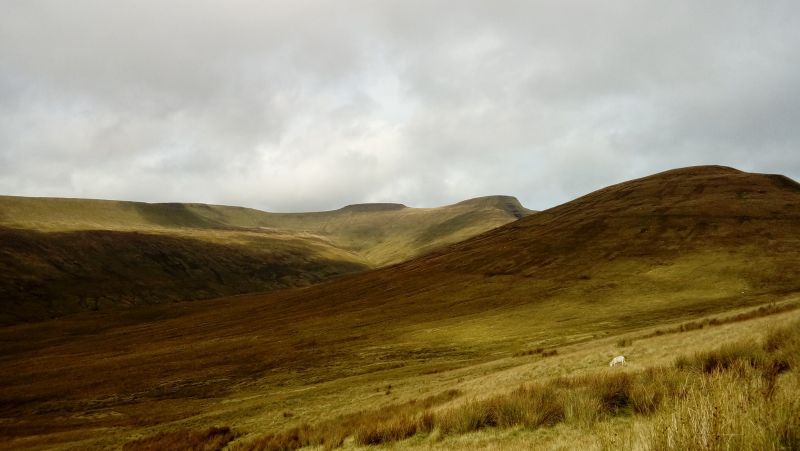 Focusing our attention now towards the south of the mountain, the Brecon Beacons Horseshoe takes on a much more challenging route that also ticks off the four peaks of Corn Du, Pen y Fan, Cribyn and Fan y Big. In fact, we think it might just be the best walking route in the Brecon Beacons.

Looming in the shadows of the mountain you’ll soon stand upon, the Forestry Commission car park near Lower Neuadd Reservoir is a great starting point for this route. With immense views of Pen y Fan, you’ll begin this nine-mile trek passing over the ridge north towards Corn Du, and it’s here that you begin to get a sense of the sheer scale and beauty of the Brecon Beacon’s glacial valleys.

As you continue heading north along the ridge, the three crowns of Corn Du, Pen y Fan and Cribyn all come into view. Along the flat summit of Corn Du, you will drop into the saddle of Pen y Fan, the tallest mountain you will be climbing.

With awe-inspiring views aplenty, to the left is the Cwm Llwch valley, and nestled in the bottom is Llyn Cwm Llwch, the legendary river and beautiful example of the valley’s upland glacial moraine. Standing where the steep glaciated slopes start to fall, there’s a steep descent off the summit which takes you down and up again to the Cribyn cairns, 795m high.

Take the ridge along the back of this mountain and that will head down to the fourth and final summit of Fan y big. From here, you’ll simply need to loop round to the start.

Exhausting, challenging, but rewarding – the perfect concoction for a walk in the hills. 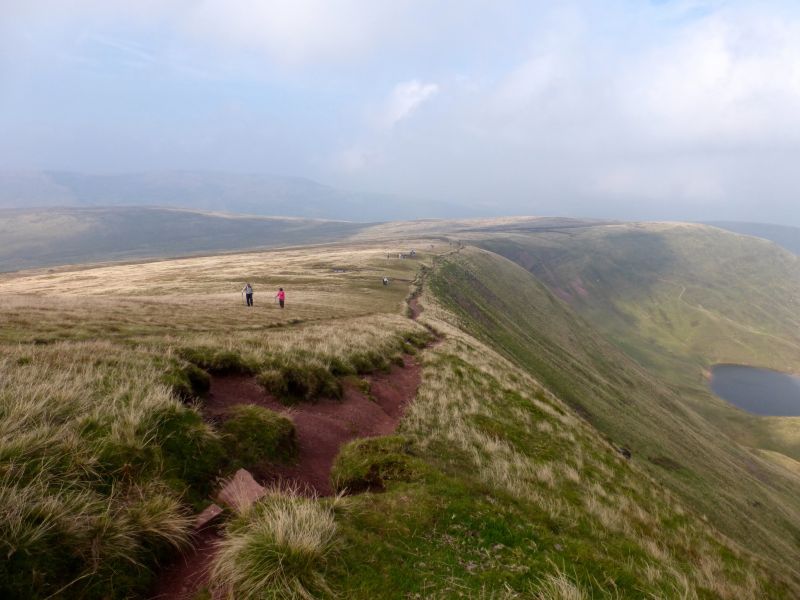 Every mountain has an ‘off the beaten track’ route, and like most others, ascending Pen y Fan from the north side of the mountain is the quietly underrated trek that stuns most of its first-time climbers. In a simple and direct ascent, you’ll immediately head for the ridge of Cefn Cwm Llwch and head all the way up to the summit of Pen y Fan.

As you’re ascending, on your left is the river of Nant Sere and directly across is the peak of Cribyn, the fourth highest in the mountain range. Like other routes too, you get more than you bargained for as you tick off the summit of Corn Du on your horseshoe descent.

This calm and straight forward trek showcases the hearty rural landscape of this stunning country and keeps you away from the crowds in your voyage to the tallest peak in southern Wales.

Where is Pen y Fan? 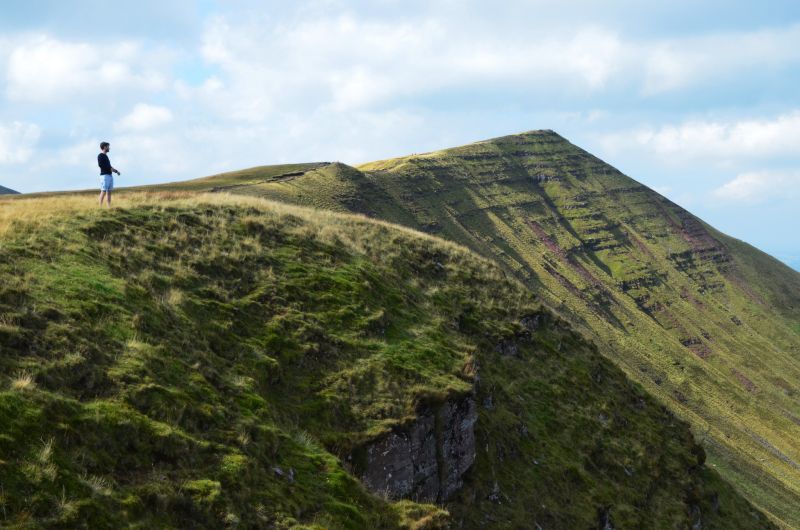 Travelling there is quite simple, with a variety of parking locations available depending on the route you’re daring to take. On the south side of the mountain, the Pen y Fan walk and Pont ar Daf car park are your safest bets, whilst the Cwm Gwdi car park is the hot-spot if you’re tackling it from the north.

For some post or pre-mountain rest, the closest town to Pen y Fan is Brecon, a small market town with a population of just under 10,000. Head there for a beer or hearty pub grub to fill your belly, concluding your day in the hills the right way.

There’s also the picturesque riverside village of Talybont-on-Usk to the east of the mountain which makes for a perfect base in the hiking area. The Usk Inn is a great place to hit the hay, or if you’d rather turn the weekend into a camping adventure, then Talybont Farm is the ideal place to pitch.

How high is Pen y Fan? 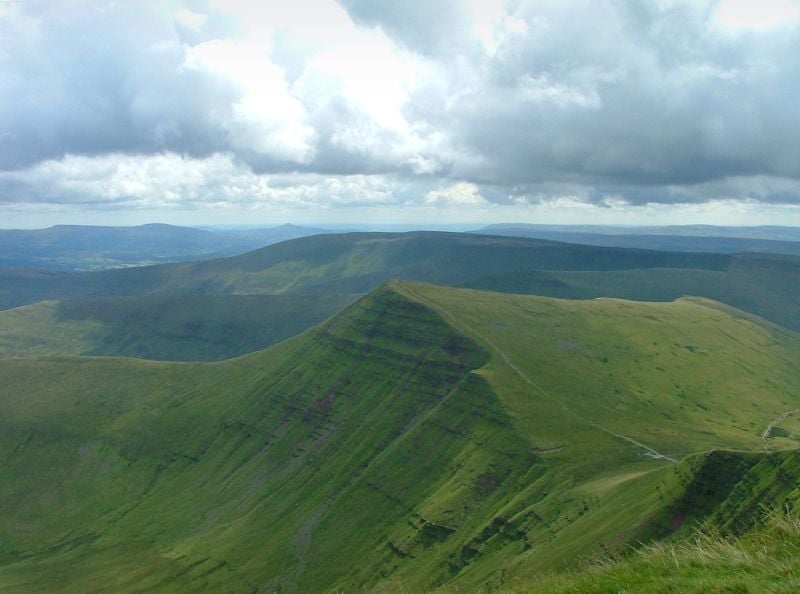 The height of Pen y Fan may not rival the tallest UK summits, but you can’t take anything away from its dramatic views. Standing at 886m above sea level with a topographic prominence of 672m, Pen y Fan boasts the tallest peak in the Brecon Beacons, tipping its neighbouring mountains to this impressive landmark. It stands opposite Cribyn (795m) and is next to Corn Du (873m). Tackle all three in one for an impressive walk. 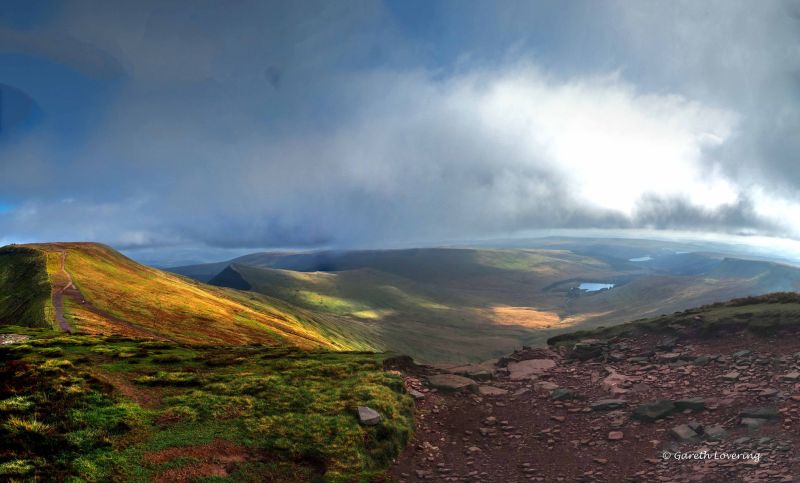 There’s never a mountain without a tale, and for Pen y Fan, there’s a handful of interesting facts that might be of interest to you before you set out on your adventure.

First of all, we’ll start with the basics and where the name Pen y Fan comes from. As you can probably tell, the name is Welsh, and when translated into English, it decodes into “the mountain’s peak” – a more than fitting name for this summit.

Together with Corn Du, the mountain’s secondary summit, Pen y Fan was previously named Cadair Arthur – meaning ‘King Arthur’s Chair’. There are no stories linking King Arthur directly to the mountain, however, legend has it, Arthur once helped the people of Brecon who were being terrorised by a pack of pesky wild boars. Once he killed the pack leader, the body rolled down into a river, which today is known as Afon Twrch, or as we know it, ‘river of the boar’.

Despite being an accessible peak for hikers of any level, it is considered to be one of the most dangerous mountains in Wales due to the changeable weather conditions that come with it. Something to watch out for, but not one to put you off.

Each year, more than 120,000 people attempt to climb Pen y Fan, which has often seen the main track brandished with the nickname ‘the motorway’. However, if you’re not one for crowds, then fear no more, as there are plenty of routes to take you to the summit of this Welsh peak that do not reside on the touristy track.

Discover more hikes and climbs in the UK with a membership to the Wired For Adventure Digital Library. With over 140 issues worth of UK routes, weekend adventure ideas, and itineraries, it’s the perfect tool to help you plan your getaways. Find out how you can get your membership here.

Why you need to give wild camping a go this year
9 of the best Peak District walks
The world's best alternative hikes
Type to search or hit ESC to close
We use cookies to ensure that we give you the best experience on our website. If you continue to use this site we will assume that you are happy with it.OkRead more