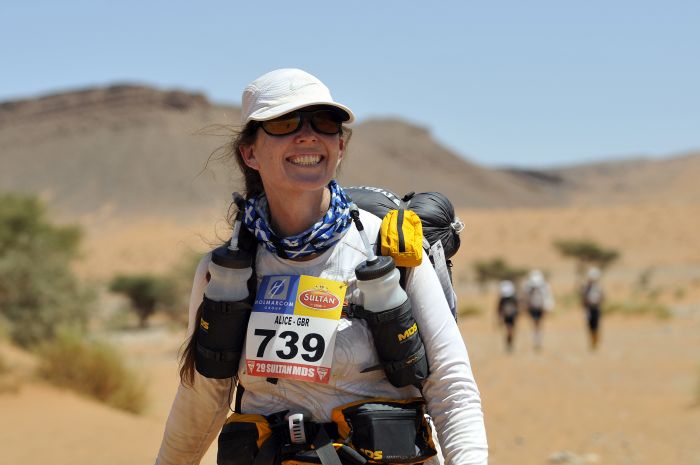 Morocco-based adventurer Alice Morrison has had her fair share of epic trips having ran the infamous Marathon des Sables, cycled from Cairo to Cape Town in the Tour d’Afrique and completed the first ever journey from the Atlas Mountains to the Atlantic Coast.

Here she gives us a glimpse into those incredible journeys, reveals what it’s like to live in a country with so many unique opportunities for adventure and recounts the dramatic moment when she was almost trampled to death by an elephant.

Adventure Travel: What drew you to Morocco in the first place?

Alice Morrison: Well, I was running the Marathon des Sables that year and I decided that to give myself the best chance I would get to know the country and I would do some heat running and some sand running. I mean, I had been to Morocco before and I absolutely love it. I speak Arabic and French so it seemed like a natural place to go to pursue adventuring.

AT: What keeps you there?

AM: Morocco is like an adventurer’s playground. You have got the desert, the mountains, beautiful cities, the ocean, all within easy reach. I did a world first in Morocco last year, there’s still uncharted places to go. If you like biking, hiking, swimming, running, trekking, then it’s the place to go.

And there’s a huge amount of local activity. You know, there’s runs every weekend, there’s all sorts of competitions and contests and things to do. So really it’s that, it’s an adventurer’s playground, that’s why I love it.

AT: How would you say that you’ve been received by the community?

AM: I am treated like a princess in Morocco. It’s the most, kind of, life-enhancing place I’ve ever lived. The minute you greet someone, you’re welcomed to the country, you have great discussions about everything from world politics to what’s happening with the weather to what’s happening next door. The people are unbelievably friendly and welcoming.

When I did this Atlas to Atlantic trek last year, mostly we stayed with families in villages and we would turn up in a village at, sometimes, 11 o’clock at night having walked for 18 hours and someone would immediately come and take us in. They would cook us food and welcome us. They boiled water for us to wash our feet in. It’s incredibly humbling.

AT: What sort of terrain and challenges did you face on the Atlas to Atlantic hike?

AM: Well the excitement of it was that it was a world first. No one had done it before, so we were ground-breaking. One of the challenges was finding the route, especially when you get to areas where it’s not mapped. 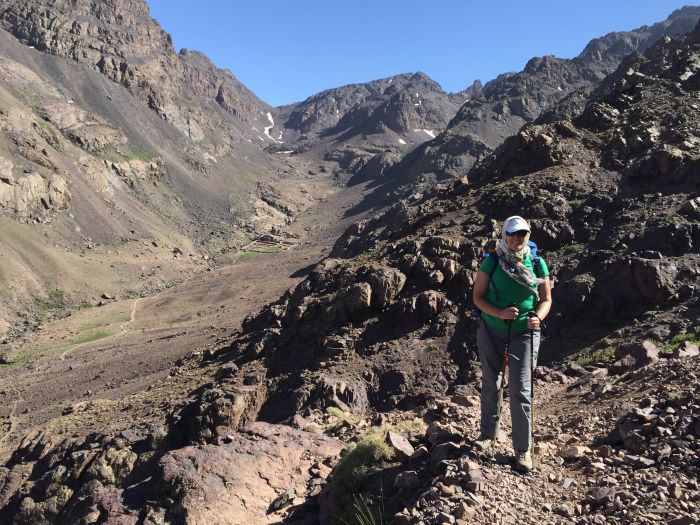 The other challenge really was that we walked in a straight line across the Atlas Mountains so we were either going up or down. For example, on the actual Atlas part, you’re at altitude, it’s very steep, it’s very, very rocky and slippery… So just the crucifying nature of either going straight up or straight down and having to keep your footing.

AT: What would you say were the highlights of the trip?

AM: The highlights were absolutely the hospitality of the people. Being alone – well, there was two of us, me and Rachid Ait Elmahjoub – being together in nature, all day, every day, often sleeping outside, seeing the wildlife. We saw tortoises, chameleons… you have time when you’re walking to see the tiny things. 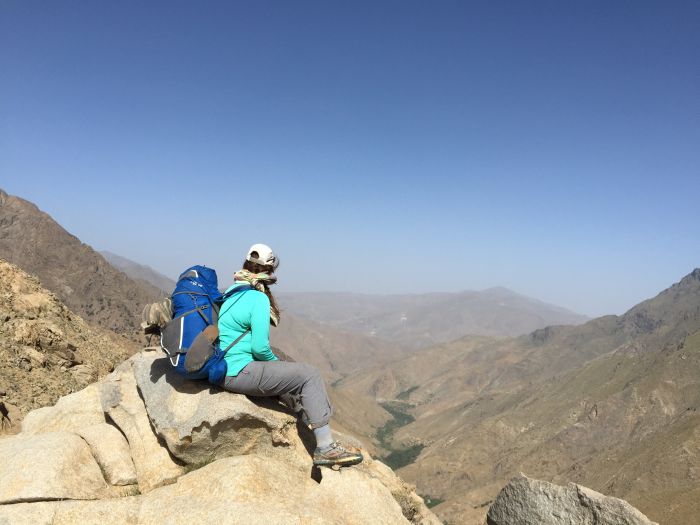 That sort of thing you can’t put a price on it. You know, sitting and eating your lunch while there are butterflies and dragonflies circling around you as you look out at these magnificent peaks.

And then one of the highlights was definitely doing a first, planning to do it, getting sponsored to do it and then actually achieving it. It’s a once in a lifetime experience.

AT: How tough was the Marathon des Sables compared to the other adventures you’ve been on?

AM: Well the Marathon des Sables is called the toughest footrace on Earth because six marathons over six days across the desert, it’s extremely tough, it really is.

The heat is an enormous factor and the terrain is difficult. You were running on sand dunes, you were running up sand dunes. The thing that I found really coruscating was the heat on the dried lake bed, because they’re almost white, so they reflect the heat and that’s always there in the middle of the day. I could just feel the heat, not only beating down on my head but beating up on my legs and behind my knees, so I was in a heat sandwich. It reached 50 degrees, which is extremely hot.

I think the biggest single factor in the Marathon des Sables in terms of difficulty is most people get terrible blisters, and I got terrible blisters… And when your feet are very, very painful and you’ve got to go for a full marathon distance on them, with each footstep you’re putting your whole bodyweight on the painful area. It’s not only a physical challenge, it’s very much a psychological challenge.

But balance against that the extraordinary majesty of the desert. I saw the sunset over the dunes, I walked all through the night under the stars and the moon and then I saw the sunrise as I crossed the finishing line. It’s completely magical.

AT: You also took part in the Tour d’Afrique, a bicycle ride from Cairo to Cape Town. What was that like?

AM: Well, Cairo to Cape Town was my first really big adventure so of course it has got a special place in my heart and I was brought up in Uganda and Ghana in sub-Saharan Africa so visiting, not those exact countries, but those regions was very powerful for me emotionally.

It was four months of riding. Physically it was a long, long endurance haul. People got malaria, people got typhoid, some people got terrible ulcers and abscesses on their groin so they had to stop riding. 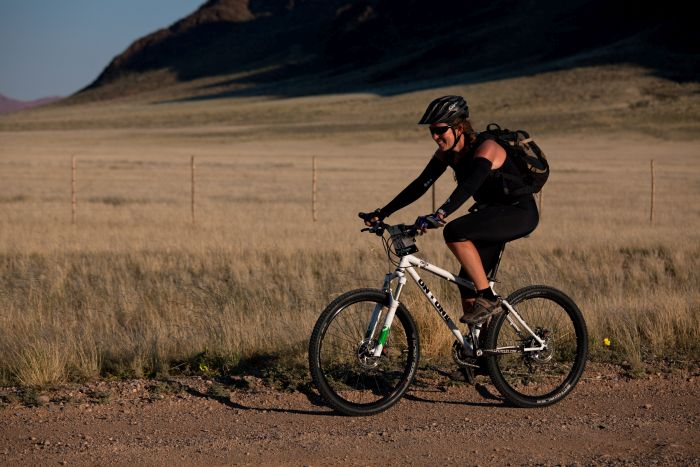 The thing about the Tour d’Afrique was, it was an immense experience because we cycled through 10 countries in Africa, from the top to the bottom. You get to see life again at a micro level, you get to meet people, and often because of the nature of a bike race you’re cycling on your own.

I guess my most terrifying moment was when I got charged by a wild elephant and I just thought I was going to die.

We were about to cross the border from Zambia into Botswana, it was an easy day, so we were cycling along and someone yelled there were elephants ahead in the forest. So I stopped, I thought right, I’ll wait half an hour and let the elephant pass and then I’ll carry on. So I stopped my bike on the side of the road, got my sun tan cream out, and then I heard the trumpet sound and to my left no more than 20m away there was a young bull elephant charging at me with its ears fully out. 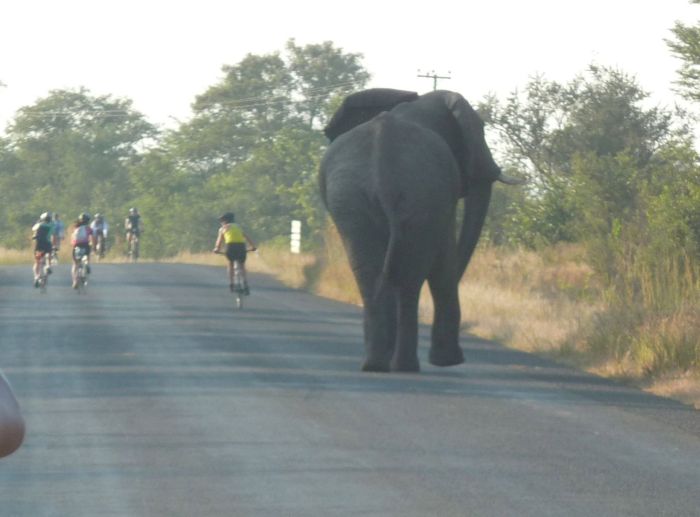 So I just dropped everything, turned my bike and just slammed on the pedals, and going through my head at that moment was, not only could I hear it behind me because it was trumpeting, I could feel the vibrations from its feet too.

I kept cycling and actually the minute I got out of its territory it stopped. So the whole experience probably only lasted, I don’t know, a minute? But it felt about five and a half years and I genuinely thought I was going to die. I was waiting for a foot to crush me. It was a really terrifying experience.

AT: What does Morocco offer adventurous travellers?

AM: It’s just three and a half hours from the UK, on the same time zone, and you can literally go to places where there is nobody and you are completely in the wild.

The nature is absolutely magnificent. You’ve got these incredibly high, snow-capped, wild, tough, difficult mountains inhabited by Berbers and by nomads. You’ve got a huge expanse of desert with dunes, with the blue, blue, blue skies where you have to make sure you have your water in order or else you’re going to be in trouble. 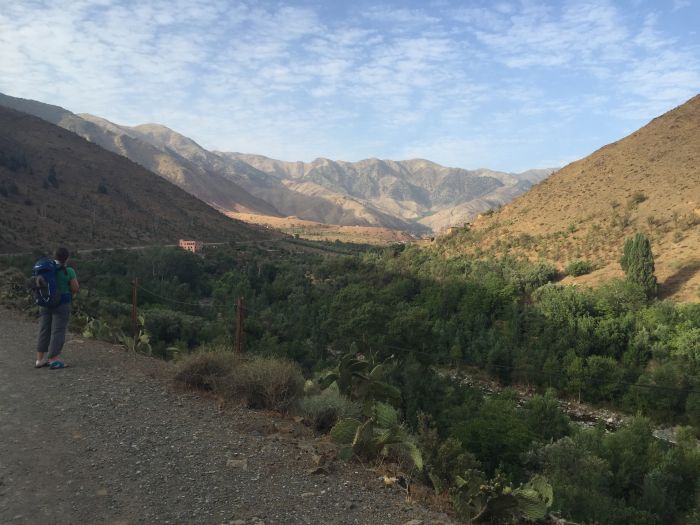 You’ve got the coast where there is fantastic, world class surfing. If you’re an adventurer and you want hiking there are a [variety] of excellent guides and they know their country backwards and just have so much to tell you and show you, and they’re all into it so you can find really good companions.

I think morocco is kind of an untamed wilderness, but it’s very accessible.

AT: Any recommendations for must-do activities?

AM: If you come to Morocco I think you should do the Three Peaks Challenge, which is the three summits over 4000m; Toubkal, Ouanoukrim and Mount M’Goun.

I would, if you can, follow the nomads on their annual migration, when you walk with the herds and the camels as they move to their winter pasture to their summer pasture.

I would also take a desert trek, I would go down into the desert because it’s an extraordinary experience and the dunes are really tough if you want some tough hiking or running.

For more of Alice’s adventures, check out her blog (www.alicemorrison.co.uk/blog), hook up with her on Twitter (@aliceoutthere1) or Instagram (@aliceoutthere1). All photos courtesy of Alice Morrison.