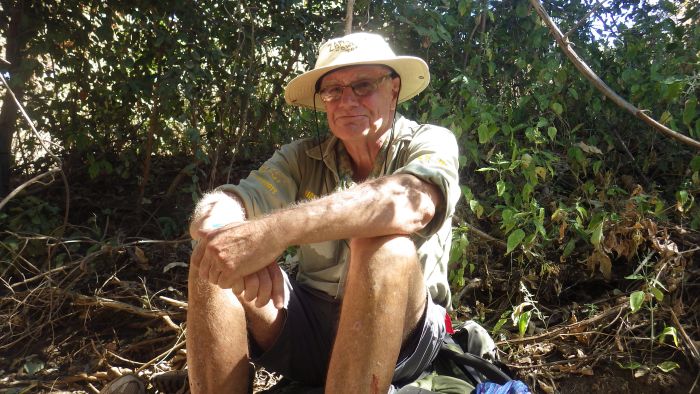 Interview: The 70-year-old man who walked the Zambezi

Former policeman turned author and adventurer David Lemon, set off on a 2,000 mile, 292 day walk along the length of the Zambezi travelling through Zambia, Angola and Mozambique. Adventure Travel met up with Lemon, 70, to him to hear all about is epic journey…

Adventure Travel: What made you want to walk the length of a huge African river?

David Lemon: Every few years I try to do something stupid, and with three score years and 10 approaching I thought, ‘I need to do something big.’ A guy called Ed Stafford had just walked the Amazon, which made me wonder if anyone had ever walked the Zambezi, a river that I’ve spent a lot of my life around. I got hold of the Royal Geographical Society and they said they had no record of anybody having done it. So I said, “OK, I’m going to walk the Zambezi.”

AT: Do you have a history of adventure?

DL: I used to be a policeman in Rhodesia, now Zimbabwe, and when I left I was bored. I wrote a book on being a policeman during Zimbabwe’s civil war, and it didn’t do very well. I had an open dinghy and I decided to row it from one end of Lake Kariba on the Zambezi to the other (about 140 miles) and back again. I wrote a book on that and it sold like wildfire. So I thought, ‘this is quite easy, I just need to do silly things that no-one else wants to do.’ I’ve cycled from Nairobi to Cape Town, kayaked a number of rivers and walked the circumference of Lake Kariba. 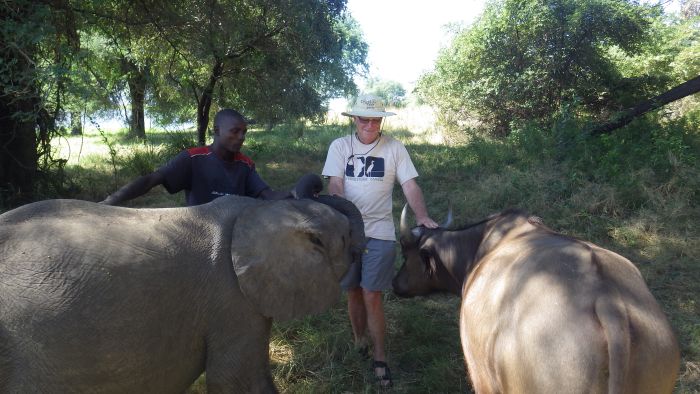 AT: Was this your biggest expedition so far?

DL: Yes probably, because it was the longest. I did it in two stretches, because my body gave up. After 184 days I’d lost over five stone through malnutrition and needed five teeth replacing; I just couldn’t go on. After a year’s break I came back to the place where I’d finished and did the rest. And it was just as bad! Not as far but just as many disasters.

AT: Tell us the route of the river?

DT: The Zambezi starts in northwest Zambia, right in the corner with Angola and the Congo. It goes into Angola, comes round for about 220km (136 miles), and goes back into Zambia, bordering Namibia, Botswana and Zimbabwe. I stuck to the Zambian side. And then it goes into Mozambique.

AT: What sort of terrain was it?

DT: I tried to stick as close to the river as I could. There were usually paths but sometimes I ended up ploughing through the bush. In a place called Mongu I had to take a road because I miscalculated (well, I hadn’t done any research) – I thought that by the end of July the water would have gone from the flood plains, whereas it doesn’t actually go until the end of September. So for 115km (71 miles) I had to take a road and I was bored trekking along the tarmac – it wasn’t my thing. 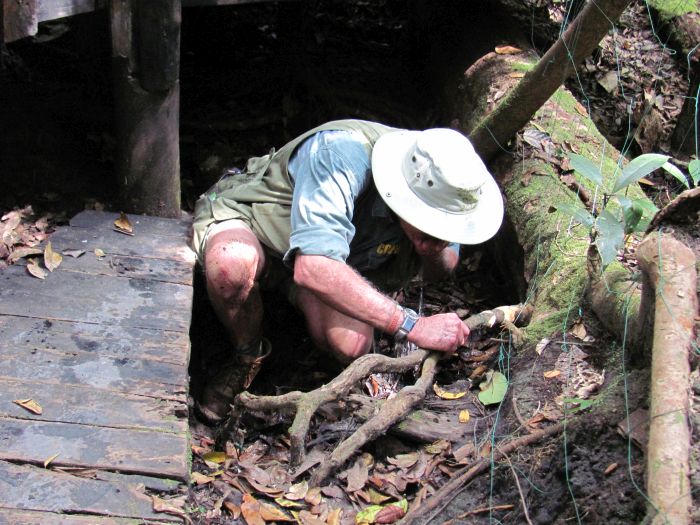 AT: Did you ever think you weren’t going to be able to make it?

DT: Before I went out to Zambia I thought it would be easy. Anybody can walk along a river, can’t they? When I got to the source – a little spring bubbling out of the ground – I’d got over 3,000km (1,864 miles) in front of me, it was thick, thick bush all round and I thought, ‘Oh God, what have I done?’ But by then it was too late.

There were times when I thought, ‘Why? Why am I doing this?’ Like when I’d miscalculated the flood plains and spent three days wading through water, sometimes over my shoulders. And there were leeches. Or the Zambezi delta, which is all swamps. You sink into smelly mud and mosquitoes come out with every step. Or in the gorges below Victoria Falls where, on one day, I walked for just over six hours and, according to my GPS, I’d done less than a kilometre. I was bruised and I thought I was going to die. But you get through.

AT: Which were the toughest bits in terms of terrain?

DT: The plains, the gorges and the swamps. In between it was wonderful.

AT: And how about other difficulties – political unrest, bureaucracy?

DT: No, everyone was wonderful. When I crossed into Mozambique the immigration officers told me I had to go and see the Governor, and I though, ‘Oh God, here we go.’ But when the Governor put his arms round me and gave me a big hug, and I had to pose for photos with the chief of police and the chief of immigration, I realised it was going to be all right. 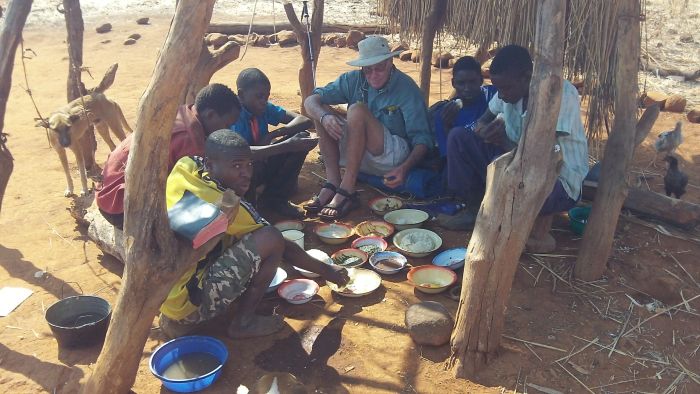 AT: Tell us about some of the highlights?

DT: There’s one thing that will always, always live in my mind. Normally when I arrived at a village the children, who had never seen a white person before, would run away and then come sneaking back. But one time I was walking along a track in Mozambique and there was a little girl in the path, aged three perhaps. I expected her to run screaming, but she watched me coming, and as I got closer, she put her arms up to be picked up. I cried. Then I picked her up and carried her into her village, where everybody burst out laughing. I didn’t even learn her name.

AT:How did people react to you?

DT: They were all so incredibly kind. When they saw this doddery old bloke emerging from the bush they couldn’t do enough. Word went along that I was coming and I would always be brought the best chair to sit on, and something to eat – usually maize meal, the staple diet of Africa, which tastes like wallpaper paste and is very hard to get down. And they were so polite. A lot of them said, “But sir, you’re very old.” And I said, “I know.” And then they said, “Can we carry your pack?” And I said, “Yes please!”

AT:How much planning did you do before you set off?

DT: None. I looked at a map. People told me look at Google Earth but I didn’t want to. I don’t want to know what’s in front of me. Otherwise if there’s a huge hill or something you have to cross, you’ll be thinking about it for days. This way I just get to a hill and it’s there and I have to cross it – that’s no problem. I know it’s not the right way to do it but it’s my way. 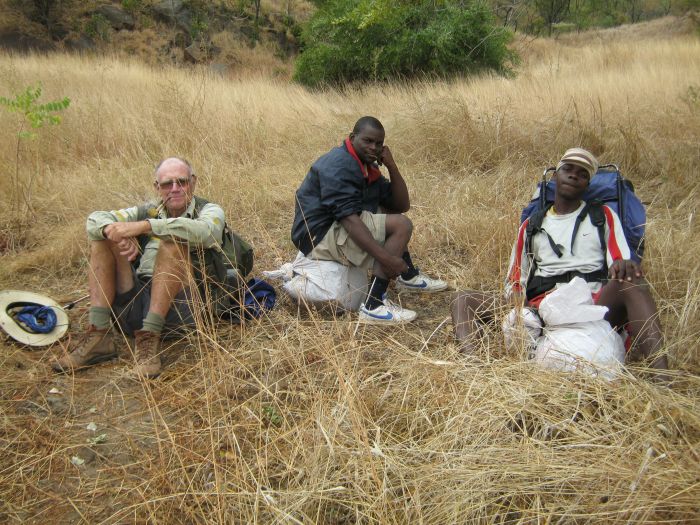 DT: I didn’t take a tent, because I find them very claustrophobic. I have a foam mat that I put on a little plastic sheet, a sheet that’s stitched up one side like a sleeping bag, and a very light blanket. And a mosquito net. I try not to use it but in Mozambique I had to.

Food-wise I had health food that people said would keep me going – basically powder that you mix with water. It’s not nice but it’s easy. And I always take tea, coffee and sweetening tablets, because sugar is too heavy. If I came across a store I’d look at the food and think, ‘I can’t carry it!’ Everything depends on weight. If you can eat it straight away fine, if you want to take it with you, forget it. And I smoke a pipe as I walked along – I lost a lot of pipes.

AT: Did you have porters to help?

DT: I was alone until the last 450km or so, when I had two porters/guides who ended up as my good mates. They were issued to me by a white Zimbabwean called Mawaya, which in the local language means crackpot. I’d walked with Mawaya through a gorge below Victoria Falls called Cabora Basa. He wanted to come with me through this gorge as the last people to use the path were David Livingstone and his party. But after about 2.5 weeks I went down with malaria. I was out to the world.

Mawaya and his friend, a historian on Livingstone’s travels, put me on a makeshift drip and used the satellite phone to arrange to have me flown out to Johannesburg. When I got back three weeks later Mawaya said, “By all means go on, but I’m giving you these two blokes to go with you.” It made life easier. They were also very good at interpreting for me, because nobody speaks English in Mozambique – all Portuguese or the local language.

When we got to the end, a German television crew was there to film me. Walking with a camera lens in my face wasn’t nice. But these young black guys had never seen the sea, and they were so excited – the camera soon went off me! It was fantastic. 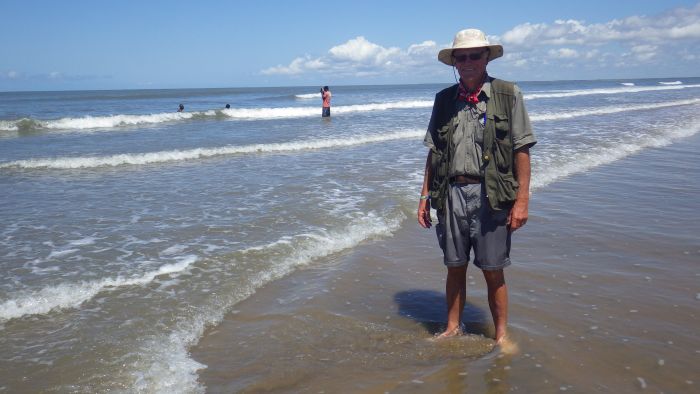 AT: What was one piece of kit you couldn’t have done without?

DT: My boots perhaps. I wear Courteney boots, handmade in Zimbabwe, and they are wonderful. I did have a GPS but I lost it crawling through some scrub in a National Park and I wasn’t going to go back and find it.

AT: What are you planning to do next?