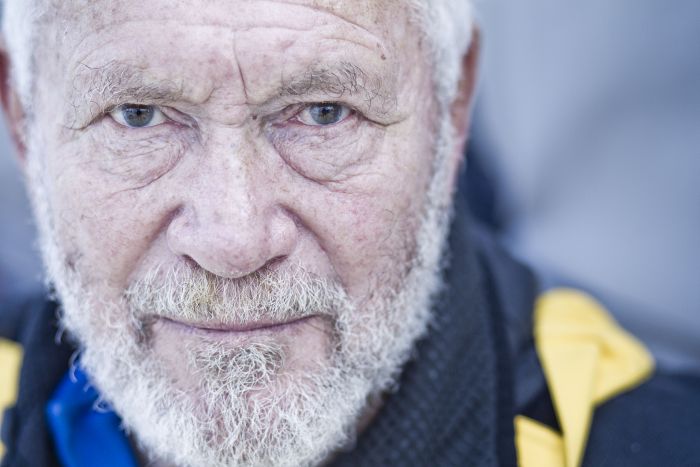 Sir Robin Knox-Johnston became the first person to sail single-handed, non-stop around the world in 1969. Since then he’s sailed round the world three more times, becoming the oldest person to do it solo in 2006 (aged 67). He’s also founder of the Clipper Round the World Yacht Race, which is the world’s longest ocean adventure, uniquely for non-professional sailors. We find out more…

My mother’s side of the family were sailors, but I never met them. I got into sailing when I joined the Merchant Navy. We had to learn to sail lifeboats and I was lucky enough to be on a ship where they took the crew off and manned it with cadets. We had a whaler and two dinghies to play with, and I took to it that way.

I was based out in India at the end of my contract, so I decided to build a yacht and sail home. I sailed back to England via the Cape of Good Hope. When I got back I heard about Chichester going round the world with one stop and thought, ‘that’s one thing left to be done.’

Being alone at sea for long periods of time doesn’t bother me. I’m quite content. I just get on with looking after the boat mostly. I love the sheer joy of the boat going fast, the sparkling sea, the fluffy-white cotton-wool clouds and the trade winds. I could sit there and lap it up for hours.

You learn your weaknesses rather than your strengths on long voyages. You’ve got to push yourself. You know that you can’t leave things; you’re constantly alert to everything about you on the boat. If you don’t do that you’re not successful.

There’s no reason age should be a barrier to adventure. Absolutely not. Physically it’s harder as you get older, but the mental side stays the same. My racing boat is getting a bit heavy for me now. I need something smaller I can sail more effectively, which would be more satisfying because I know I’d be more competitive in it. You just adjust as you go along. 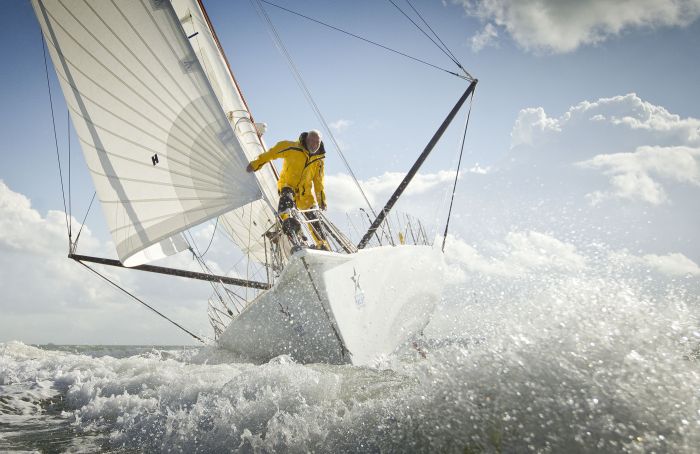 I was climbing an unclimbed peak in Greenland with Chris Bonington – we’d sailed there – when I had the idea of the Clipper Round the World Yacht Race. We were camping on glaciers on the way to this mountain, pulling everything in sledges, and Chris was talking about how much it costs to climb Mount Everest. It sounded a lot of money so I thought, what’s the sailing equivalent? For someone who’s never sailed around the world, who’d love to do it but hasn’t got enough money to buy a boat, or hasn’t got confidence in themselves? I worked out it was about half the cost of climbing Everest, so I put an advert in the paper and got 8,000 answers.

The BBC has this idea that sailing is an elitist sport, but that’s so wrong. The sport crosses all boundaries. If you want a good crew, if you’re racing, you don’t care who Daddy is – you just want a good bloke up there. I was on a racing boat with a brick-layer’s apprentice. He was damn good, and that’s all we were interested in.

Women are equally as good as men, but they do it differently because they’re normally physically not as strong. They think their way round it. If you want a generalisation I would say women are better light weather helmsmen than men, because they focus. Men will start talking about the football results and get distracted. You use the skills of each really. Britain has got some very, very good, probably even a monopoly, of single-handed round the world female sailors. People like Dee Caffari and Ellen MacArthur – these are first-rate sailors and if you’re up against them in a single-handed race you do not underestimate them.

One cure for seasickness is to drink a pint of salt water from the sea. The one thing that’s for sure is that you will bring it up again. But it might just counter the acid in your stomach… or at least that’s a theory, I don’t know if a doctor will agree. I think it’s more likely that people think, ‘my God, I’m going to have to stop being seasick because I don’t want to have to drink another pint of that!’ I’m lucky, I’ve only ever had seasickness once, and that was my first trip to sea.

All eight legs of the Clipper Race are interesting; each one has a different character. The first leg is fascinating because of the Doldrums. The next one’s a bit more straightforward; the one after that is pure Southern Ocean – that’s where you get huge waves. Leg four brings in the Sydney-Hobart Race, which is great fun for the crews. Next it’s Queensland, Da Nang in Vietnam and China – fascinating places to visit. And then you’ve got the really big one, all the way from China across to North America, 5,500 miles in the North Pacific, which is as bad as the Southern Ocean so it’s a toughie. The penultimate leg goes through the Panama Canal – a fantastic experience.

Watching people who haven’t sailed before develop into really good, safe sailors probably gives more satisfaction than anything I can think of.