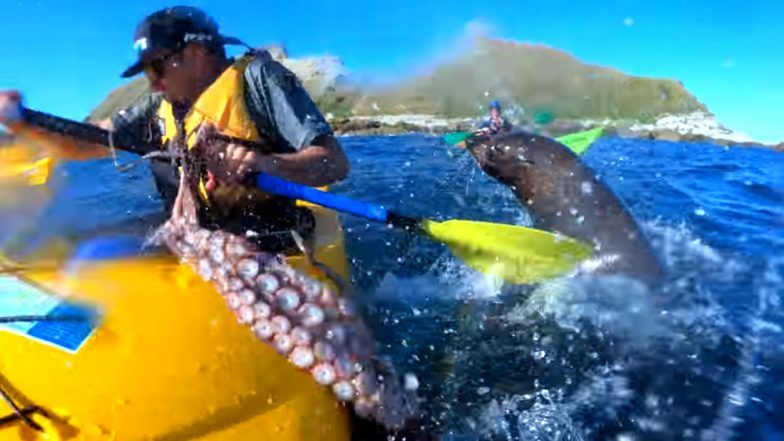 An incredible and hilarious video has surfaced on Instagram this week that shows the unbelievable moment a seal slaps a kayaker in the face with a huge octopus.

Kyle Mulinder was minding his own business, kayaking with a group of colleagues off the coast of Kaikoura, on New Zealand’s South Island, when out of nowhere the kayaker gets slapped straight across the face by a seal with an octopus, which came flying at a rate of knots out of the water.

The mischievous seal can be seen swimming towards Kyle, before leaping up out of the water and lunging towards the kayak with the octopus in his mouth. The giant octopus hits Kyle square in the face as the seal dives back into the water, and you can see the absolute shock on the kayakers face as he recovers from the sudden blow.

The unbelievable moment was caught on camera by fellow kayaker Taiyo Masuda, who shared the footage on his Instagram account. The group of kayakers are colleagues from GoPro, and were out on the water in order to test the company’s latest devices.

Kyle told Yahoo News: “We were just sitting out in the middle of the ocean and then this huge male seal appeared with an octopus and he was thrashing him about for ages. My face happened to be in the wrong place at the wrong time.”

After the incident, Kyle recalls his surprise: “I was like ‘Mate, what just happened?’ It was weird because it happened so fast, but I could feel all the hard parts of the octopus on my face.”

Sound crazy? Watch the sensational moment for yourself below…

新しい @gopro #Hero7Black で衝撃映像撮れた🤣🤣 4K60fpsの安定化オンで撮ったからここまで驚いて全部撮れてた！こんな楽しいカヤックはじめて！！音声も海とかのガチャガチャ音ないし最高！ @barekiwi getting octopus smashed into his face by a seal⁉️ I’ve never had such an amazing kayak everrrrr!! I am super stoked that the new @goproanz #Hero7Black captured without missing a thing although we shook so much, #hypersmooth the stabilisation managed it so well!! I made a little montage to show how good the audio came out!! No noises super clean!! Thanks to @kaikourakayaks @purenewzealand @kaikouranz @goprojp @howtodadnz @snapair for such an epic trip!! #gopro #ゴープロ #ゴープロのある生活

Best hikes in the world: The Kerry Way
Why Oman should be your next adventure destination
The road to Everest: Climbing Mount Elbrus
Type to search or hit ESC to close