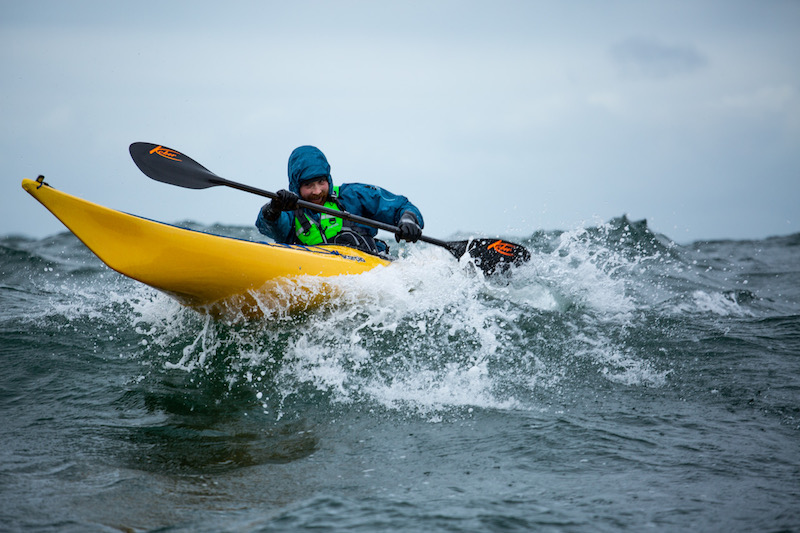 AT’s editor Rob Slade heads to Ireland’s south-west coast for a bit of solitude on a kayaking adventure, but he soon discovers he’s far from alone…

Being only a stone’s throw away and having a reputation for being beautifully quiet, Ireland has been at the top of my list for quite some time. So when the folks at Pyranha Kayaks invited me over to go for a paddle on the south-west coast, I jumped at the chance.

Typically, whenever I’ve gone kayaking, it’s been when the weather is clear and the sun is casting a comforting warmth over the coast, but that changed in Ireland. With a period of rough weather moving through the country, there was no chance of waiting out for calmer conditions. As it turns out, that was no bad thing…

My journey began with a turbulent flight from Birmingham to Shannon Airport and a very bumpy landing, before a couple of hours of driving into County Kerry to the small town of Kenmare. This was to be our base for the couple of days we were spending in Ireland, and I couldn’t help but feel instantly at home. Kenmare is a town of great restaurants, good pubs and beautiful views over the bay. Look to the horizon and you’re likely to see rugged mountains or glistening sunlight bouncing off the sea. When we arrived in town, however, none of this was visible, as it was almost midnight.

As dawn rolled around, so did a period of relatively calm weather. Encouraged, we got an early start, jumped in the vans and headed west along the Ring of Kerry until we reached a sheltered bay near the village of Sneem. The wind was blowing and the swell further out looked foreboding, so we donned our NRS dry suits, unloaded the kayaks and launched onto the water.

It would be fair to say I was the least experienced kayaker in the group by a long way. Everyone else had been kayaking all their lives, with a couple of the guys having paddled for Great Britain in their time, so when I ended up in a Pyranha Fusion Duo kayak with our guide, I was pretty relieved. With awful weather on the horizon, this was no time to be faffing around in a single kayak at the back of the group. Having launched onto the water, I was surprised at just how stable the Fusion Duo felt, and that safe feeling was certainly going to be tested throughout the day. 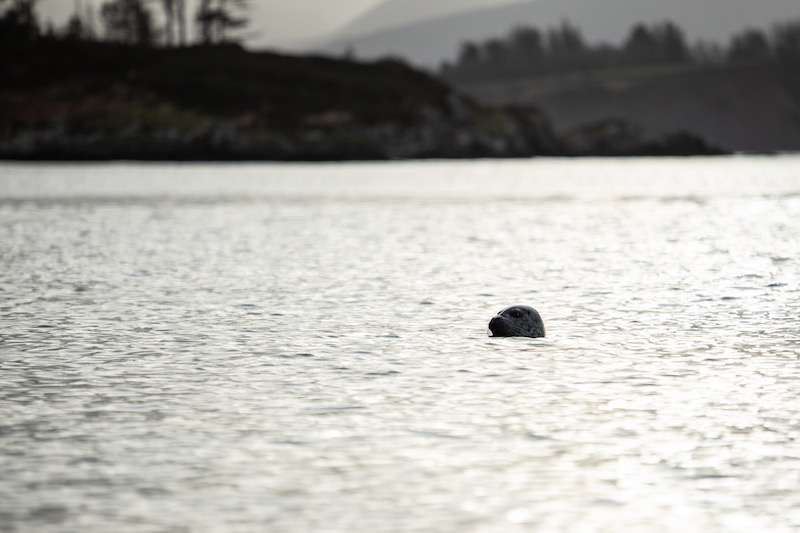 As soon as we were in the water, we were on the move. Colin, our guide from local tour company Emerald Outdoors, had spotted some harbour seals relaxing on some rocks, so we entered into stealth mode and promptly headed for them. Of course, as soon as we were within 50 metres of them, they slipped into the water and disappeared from view. So, we carried on our way.

From the sheltered bay we launched into, we gently paddled down a calm channel of water between two islands. Either side of us, dense woodland jostled for space, forming a natural barrier against anyone hoping to seek shelter on land. Ahead of us lay the Atlantic Ocean, and it looked rough, seriously rough. In contrast to the sheltered water we found ourselves in, the water in the distance was choppy, wind-battered and looked far too gnarly to paddle through. Of course, that’s exactly what we did.

As we paddled closer, the wind became stronger, and I was soon being battered by salty water as the gales picked up. Soon enough, we were out onto the open water, with ocean swells so big they were hiding our fellow paddlers from view entirely. It was wild, but it was so liberating, and I couldn’t believe how well the Fusion Duo kayak was coping. Every peak and trough of the swell was handled with ease, and at no point did I feel like there was any risk of toppling over. 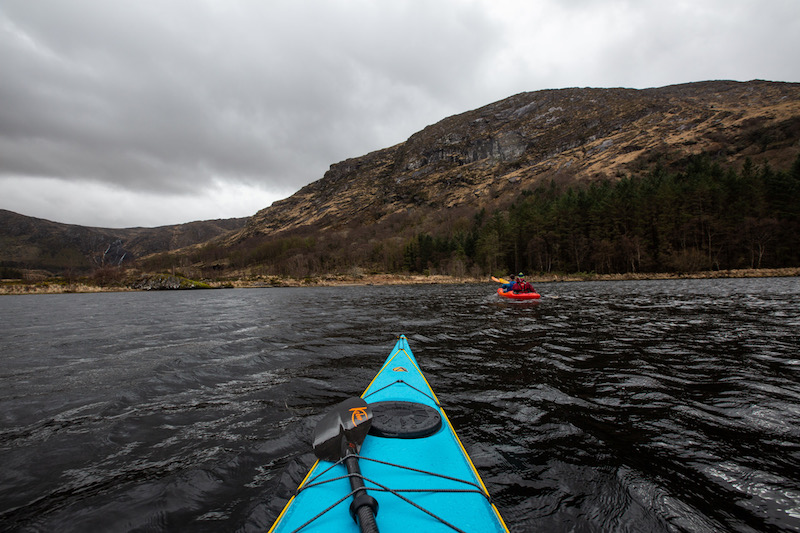 We gradually paddled further out, before curving round to head inland once again into Kenmare Bay. That’s when we had another wildlife encounter, only this time we had longer to appreciate it. Overhead, Colin had spotted not one, but two majestic sea eagles, their huge wingspan and black and white colouring soaring high above us. It was a special moment, not least because these incredible birds are so rare in the area. In fact, Colin believed there was only a handful in the region.

Spurred on by our encounter, we ventured further into the bay, catching a ride on the rolling swell whenever possible. Paddling around small islands and under quaint bridges, we were thrilled to have spotted more harbour seals. This time there were quite a few of them, and we again tried to approach stealthily.

Clearly, we were not going to be a match for these slippery creatures, and they slipped away just as the last ones did. Only, these guys didn’t stray too far away. As we slowly paddled around the small bay, we would regularly see a seal’s head pop out of the water to keep a close eye on us, before disappearing back under the surface. We stuck around for a while enjoying nature’s finery, before slowly dragging ourselves away and heading back to the vans. 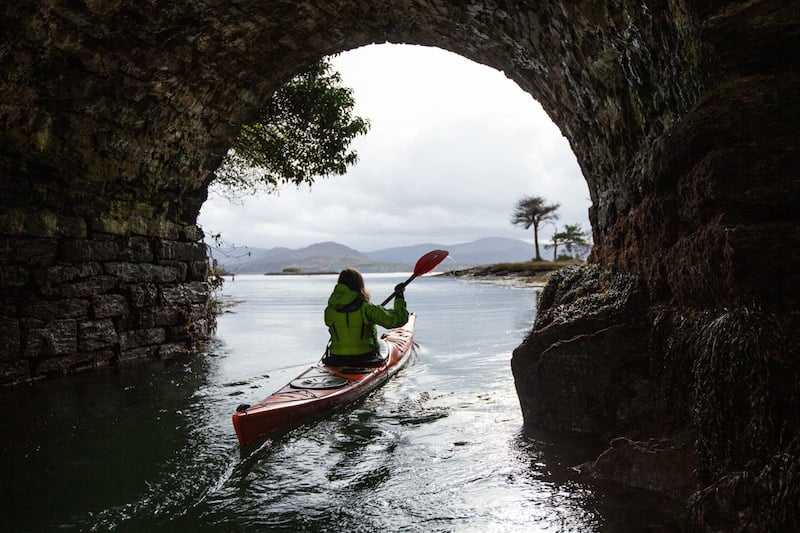 Later that day, we headed into the mountains south of Kenmare and pulled up in Gleninchaquin Park. Here, we unloaded the kayaks and set off onto Lough Inchiquin. Encircled by imposing mountains, the lake promised another couple of hours of solitude, with not another soul in sight. By this point, the wind had started to howl, but it still remained largely dry, so we pressed on. At the head of the lake, a thin torrent of whitewater cascaded down a cliff for some 50 metres, while a vibrant green forest stretched along the southern shore.

It was an incredible way to spend an afternoon, and the area seemed perfect for exploring further. Dozens of trails criss-cross these mountains, but you’ll hardly ever see that many people, so solitude is easy to find. For us, though, the day was coming to an end. The rain had started to fall and the storm that had been forecast was finally settling in, so we packed up the kayaks and headed back to town for some well-earned grub.

The gear we used for kayaking in Ireland 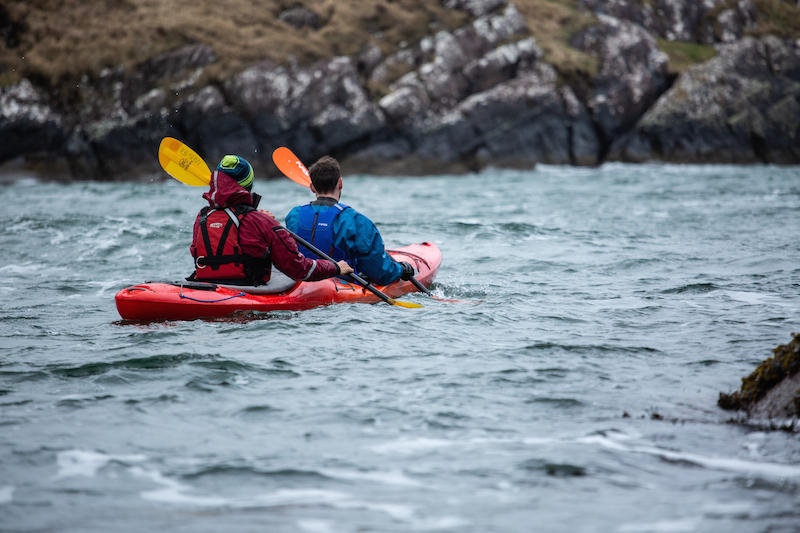 While in Ireland, we were using a Pyranha Fusion Duo kayak, which is well suited to a huge range of environments. Whether you want to enjoy a sea kayaking trip with a friend or take your partner on their first whitewater experience, the Fusion Duo can handle it all. It’s both comfortable and stable, so all you need to do is sit back and enjoy the ride.

Beautiful illustrations depict epic 17,000km cycle from Scotland to Cambodia
UK Adventure: Climbing Ben Lomond and the Cobbler in Scotland
5 incredible activities in Peru beyond the Inca Trail
Type to search or hit ESC to close