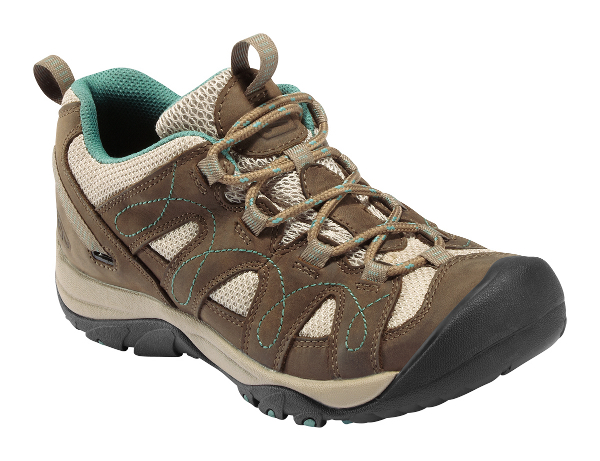 The KEEN Shasta’s grip had probably the most rigorous testing out of all the hiking shoes on test here –trying to push the first visitor to Adventure Travel’s new HQ’s car out of the mud when he followed his sat nav and went down a bridleway. The Shasta didn’t manage to get the car out, but it could have been a bit of an unfair test (we needed a 4×4), although I still would prefer a bit more grip from the shoe’s sole, which is made from KEEN’s own pattern.

The mid-sole too could have more in the way of protection – when walking I can feel almost every stone beneath the front of my foot, which would make longer distances painful – and it’s extremely flexible. That’s a bit of a negative start to what’s a decent enough hiking shoe at the happier end of the price range  though. The Shasta’s a good-looking shoe, and it’s quite light weight at just under 400g for a size 6.5. The shoe we have on test isn’t waterproof, with KEEN claiming it’s suited for adventures in warm, dry climates.

Ever the pessimist, I’d be therefore far more likely to pay an extra tenner and go for the Shasta WP, which is waterproofed with KEEN’s DRY membrane (gosh I hate all these capital letters) and costs £80. But if you’re looking for a shoe for warmer walking as we come into summer, this could be one to look at. Besides being quite light, it also has mesh sections on the upper which would be good for breathability in hot conditions.

I wouldn’t want to wear the Shasta for anything too hardcore as the sole’s very flexible and although there’s good enough extra support on the toe for walking, it’s not sturdy enough to be jammed into a rock when via ferrata-ing or scrambling. But if you’re after a shoe for basic walking as well as one that looks good wearing around town, this isn’t a bad option at a few quid cheaper than most others on test.

Lightweight, but I could have done with more from the midsole.