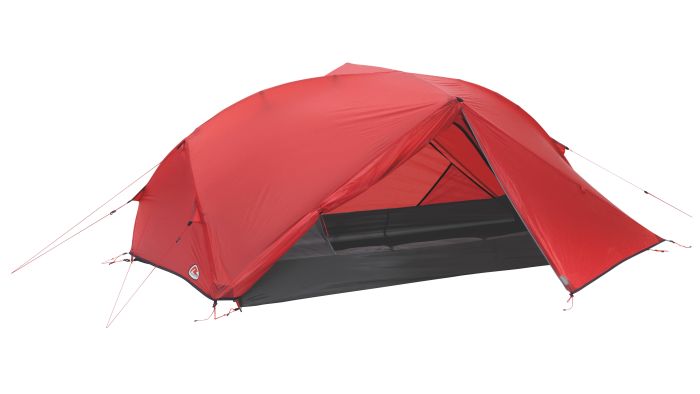 I love Robens tents. After nearly seven years of testing kit for Adventure Travel the excitement of getting my hands on a new one isn’t quite as strong as it was, but I’ve always got a soft spot for the brand.

The Falcon UL is one of the lightest on the market. Robens says it has a maximum weight of 1.09kg, and a pared down weight of 1.02kg – both astonishingly light, making this a great tent to consider if you’re on an expedition where you’re carrying lots of kit (such as long distance walking trails like these), or you want to be fast and light. The flysheet fabric feels incredibly thin – almost crisp-packet-esque – but it has a 3,000m hydrostatic head. The pegs are tiny too, but I would still trust the tent in some pretty bad conditions.

The Falcon UL is fairly simple to pitch: it goes up inner first and is free standing. The only fiddly bit was getting the Velco tabs on the flysheet around the poles, and these occasionally undid themselves, but nothing serious.

As expected from a tent that’s so light, there isn’t much space in the inner – if there’s two of you, you and your hiking buddy are going to get cosy. There’s only one door, at the side, so the person by the wall will have to clamber over the person by the door to go to the loo in the night. But there is enough room for two people to sit up (a little cramped if you’re really tall), which is nice. There are two small pockets in the inner, on the far wall, but they won’t hold much. There aren’t any hooks on the ceiling, but this doesn’t really bother me.

The porch is big enough to hold two rucksacks, and in warm conditions it can be completely rolled back. You don’t really want to be cooking in a tent this size anyway, but the nature of this porch makes it very tricky – you’re best facing the porch away from the wind and having one side of it open.

The inner tent is completely mesh, apart from the bathtub bottom, making it feel nice and airy. The inner door only has a one-way zip which is a shame. There’s one ventilation point on the flysheet, with a stiffened rim.

The Robens Falcon UL tent a quality lightweight tent. It’s expensive, but if your priority is keeping weight down, it’s a goodie.