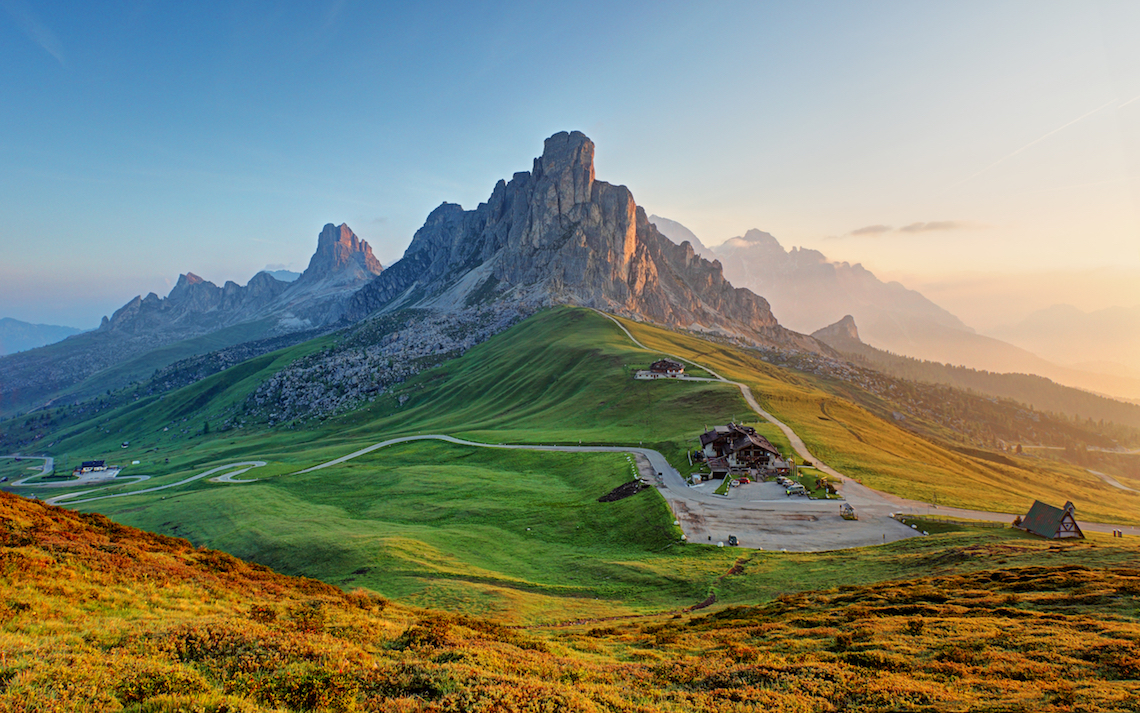 7 unusual adventures to try in the Italian Dolomites

The north-eastern region of Italy has it all: high glaciated peaks, the spectacular Dolomites, and the historically and culturally rich low lands of Venice and Verona. Just passing through the north east isn’t enough. You need to spend a good few days here in the Italian Dolomites exploring the various sights, mountain passes, and incredible opportunities for adventure high up in the Alpine peaks.

Encompassing the regions of Trentino-Alto Adige, Veneto, Friuli-Venezia Giulia, and Emilia-Romagna, north-eastern Italy stretches from the Swiss border in the west to the Slovenian border in the east. To the south, it’s bordered by the famous wine-making region of Tuscany, hugging the coast of the Adriatic Sea as it goes.

To say that the Italian Dolomites contains some of the world’s most dramatic and inspiring mountain scenery in the world is no exaggeration at all; the Dolomites and the surrounding mountain ranges are unparalleled when it comes to scenery so impactful that it just slaps you in the face and demands your attention. The jagged limestone cliff faces are surreal in both scale and setting, and the good news is that the area is fraught with hiking trails, via ferratas, and viewpoints that allow you to immerse yourself in their might.

If you’ve never been to the Italian Dolomites and need a quick fix of what’s on offer, check out the opening scene in the Silvester Stallone film Cliffhanger. The story may be set in the USA’s Rocky Mountains, but when it came to filming, they shot the dramatic rescue scene in the Dolomites near the town of Cortina.

Put simply, if you’re looking for an area of Italy that’ll leave such an impact on you that it’s all you’ll be able to talk about for the rest of the year, the Italian Dolomites is it. We’ve rounded up a selection of our favourite adventurous activities to do here, but this is just the tip of the iceberg. Spend some time seeking out the magnificent via ferratas, the stunning mountain lakes, and the fascinating historical areas, and you’ll not want to leave.

Walk the Road of 52 Tunnels 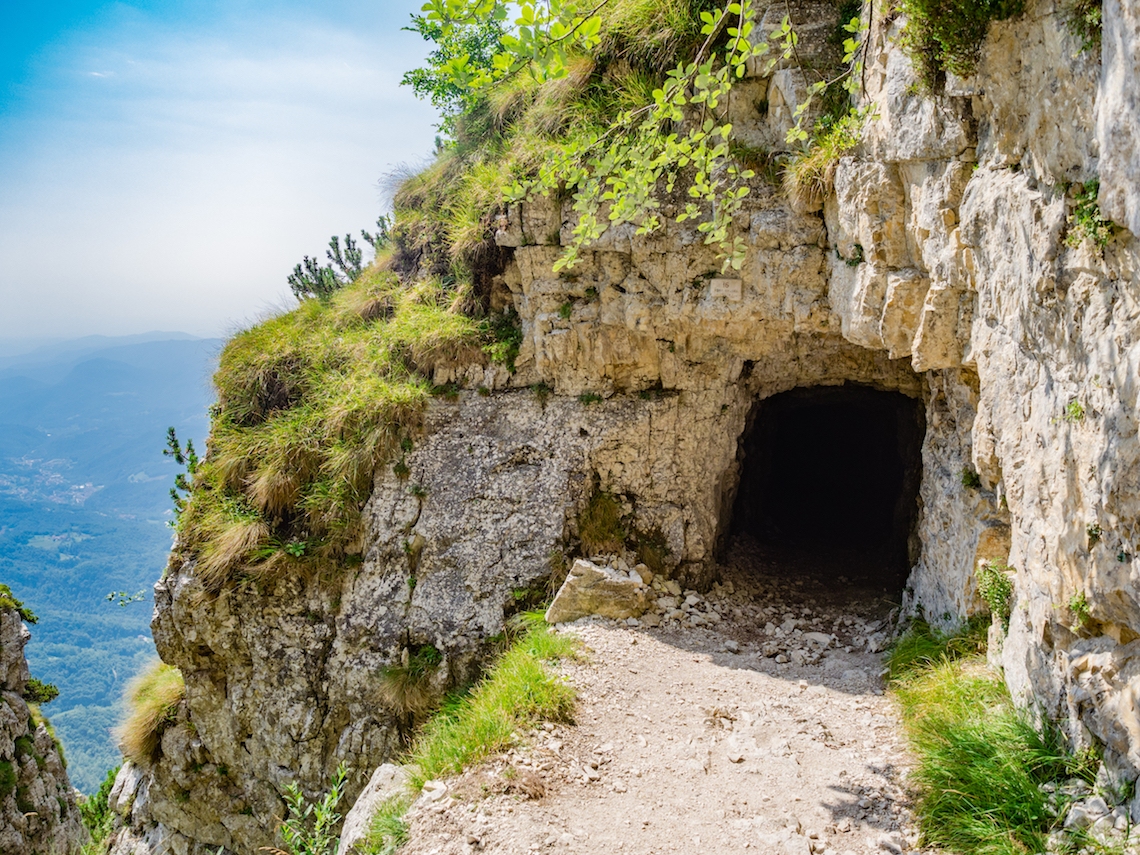 The Road of 52 Tunnels, or the Strada delle 52 Gallerie to give it its proper name, is a remarkable trail that will take you literally through mountains. Originally, the path, which features 52 tunnels of varying lengths, was built to allow Italian troops to resupply when fighting against the Austrian and Hungarian forces in World War One.

The path itself lies between the mountain passes of Porte del Pasubio and Bocchetta Campiglia and follows a route that would shield pack mules from Austro-Hungarian artillery fire. Along the way, you’ll find 52 tunnels which were excavated from the rock, with each tunnel being numbered and named. The most interesting of the tunnels is Tunnel 20, which has been carved out of a rock tower and twists around like a corkscrew to gain height.

Today, the trail provides us with a wonderful way to experience the Pasubio Massif in Veneto, just a few miles east of Lake Garda, crossing mountain sides, passing deep canyons and sheer rock faces. Make sure you bring a headtorch for this one as the tunnels are not lit and can be pitch black! The Road of 52 Tunnels is just four miles long, and you can park at the beginning of the trail to make things easy.

Tackle the Via delle Bocchette via ferrata 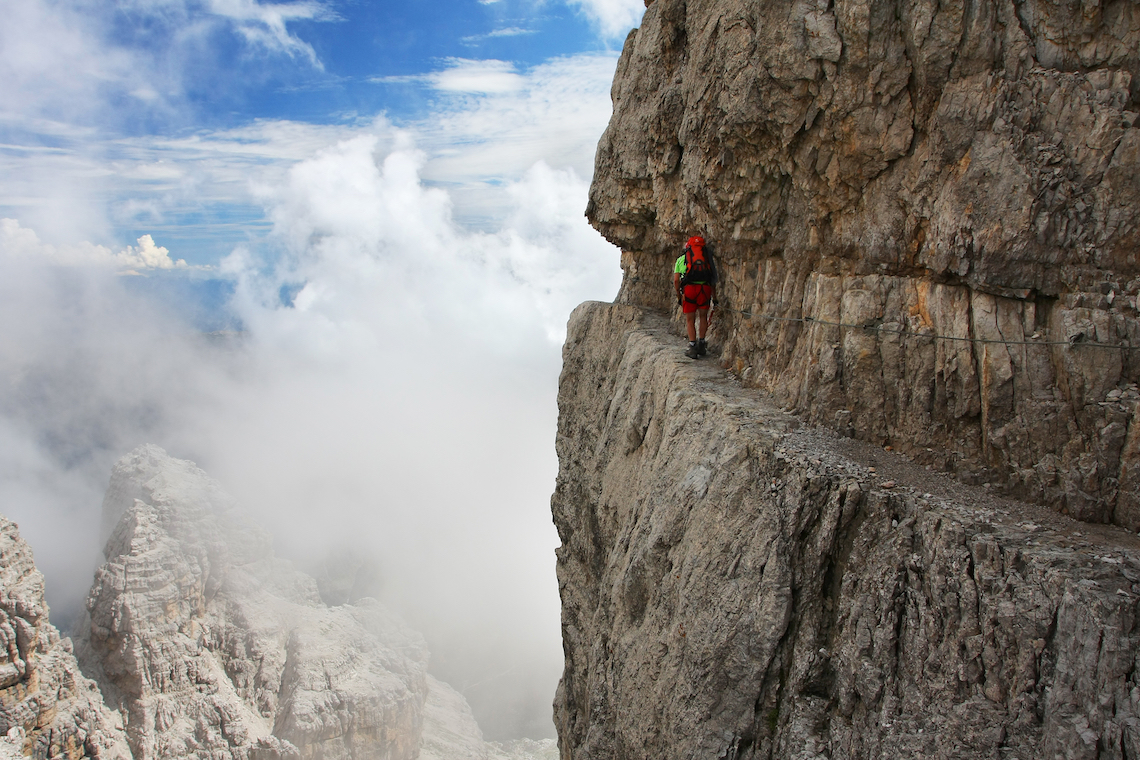 If you’re looking for an epic and accessible mountain adventure in the Italian Dolomites, the Via delle Bocchette (or the Bocchetta Way) is exactly what you want. This multi-day hut-to-hut adventure will take you on a traverse of the Brenta Dolomites along a series of hiking trails and exciting via ferratas. It’s one of the most famous of its kind in Europe, and for good reason.

The trail, which opened in the 1930s, can be broken down into various day hikes, but the real treat is to tackle it in its entirety, which will take roughly six days. Along the way you’ll travel along narrow ledges on extremely exposed terrain, all the while clipped safely onto the metal cables that line the route. The best thing about the Bocchette is that it’s a pretty simple via ferrata from a technical point of view, and the views of the surrounding Brenta Dolomites (including the magnificent rock spire of Campanile Basso) are simply some of the best to be found in Europe. 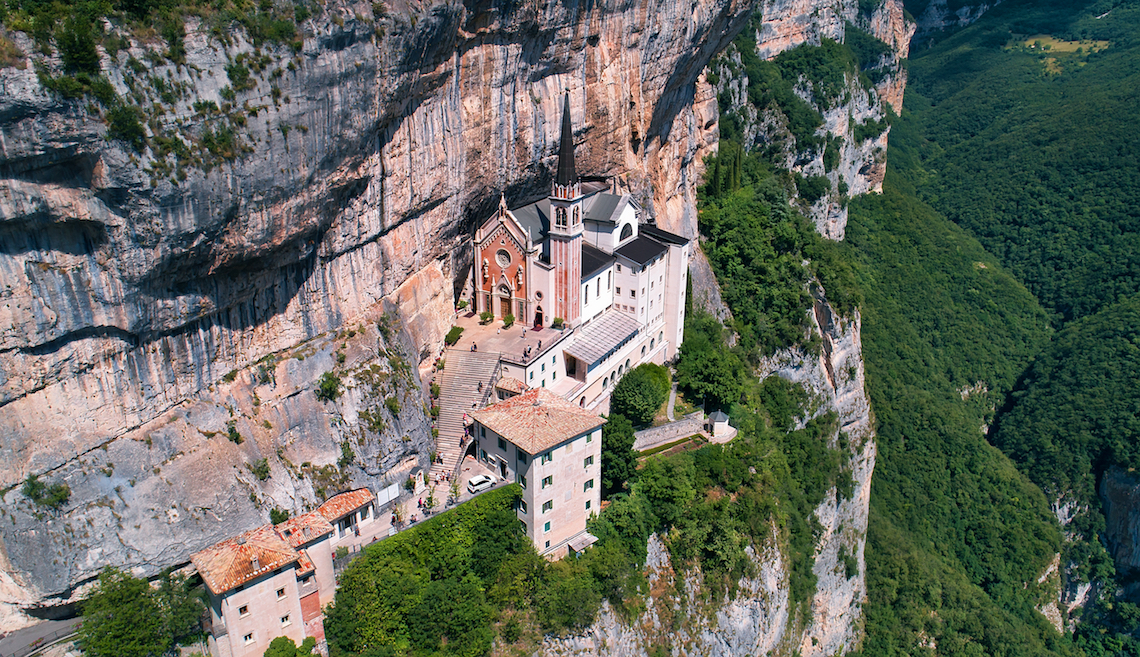 When you travel through Italy, a question that will often pop into your head is ‘who on earth decided to build that there?!’. Whether it’s the towns and villages clinging to the Amalfi coast, or the remarkable roads that twist and turn their way up seemingly vertical rock walls, Italian engineers and architects have an impressive resume. One such place that stands out amongst the most awesome, is the Sanctuary of Madonna della Corona.

Just a few miles from Lake Garda, you’ll discover the remarkable building which has been built onto a thin rock shelf that juts out from a cliff face on the side of Mount Baldo. Originally, holy men would come here to gather for silent contemplation, sitting high above the Valley of the River Adige below. In 1530, construction of the church which sits here today, began, and from there on the sanctuary became a popular pilgrimage site.

But you don’t have to be religious to appreciate the peaceful beauty and awe-inspiring architecture of the place. It gives anyone the opportunity to discover serenity in the Italian mountains, and the hike up there will be more than enough to get your blood pumping. Follow the Pilgrim’s Path (or Hope’s Path as it’s also known), a long pathway of many steps, from the town of Brentino, for the best experience, or take the shuttle bus to the sanctuary if you’re not feeling like a walk. 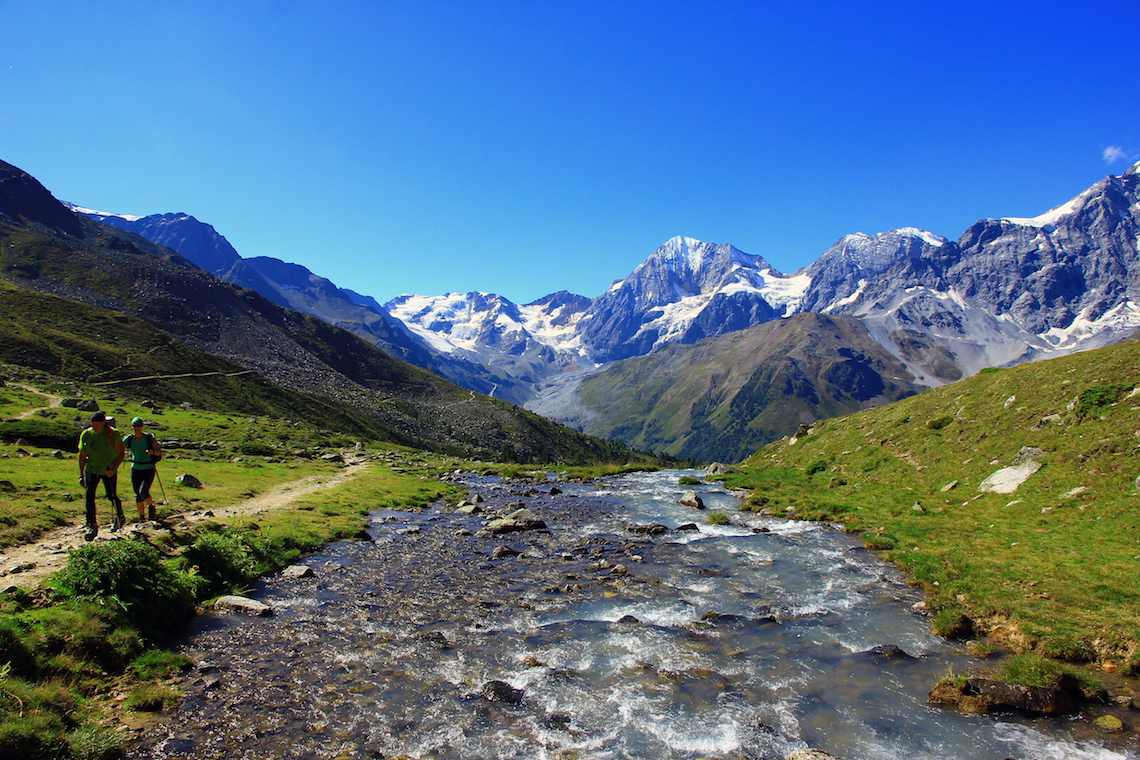 Nestled in the Central Eastern Alps, straddling the border of Italy and Switzerland, you’ll find the mighty Ortler Alps, a range of high and dramatic glacier-covered mountains. At their heart is Ortler, the highest mountain in the group, sitting at a heady 3,905m. Views of the beautiful peak can be obtained easily from one of my favourite roads, the Stelvio Pass, but to get a true sense of the sheer beauty of the place, there’s a seven-day, high-altitude hike that circumnavigates the Ortler Group called the Ortler High Mountain Trail.

This one’s for those who like a challenge though. You’ll need to be confident on your feet, have experience of walking over glaciers, and be sure that you’re fit enough to complete seven to eight hours of hiking a day at high altitudes. In total, the route (which is roughly 75 miles long) will see you gain over 8,000m in height (that’s nearly as high as Mount Everest), while you’ll find yourself plodding along at over 3,000m at parts. The route is split into seven sections, each one well signposted, with designated mountain huts offering food and accommodation placed at the end of each day.

The trail explores the Stelvio National Park, giving you the chance to discover the variety of flora and fauna that call this wonderful corner of Italy home, while providing a stunning backdrop in the form of the Ortler Group. 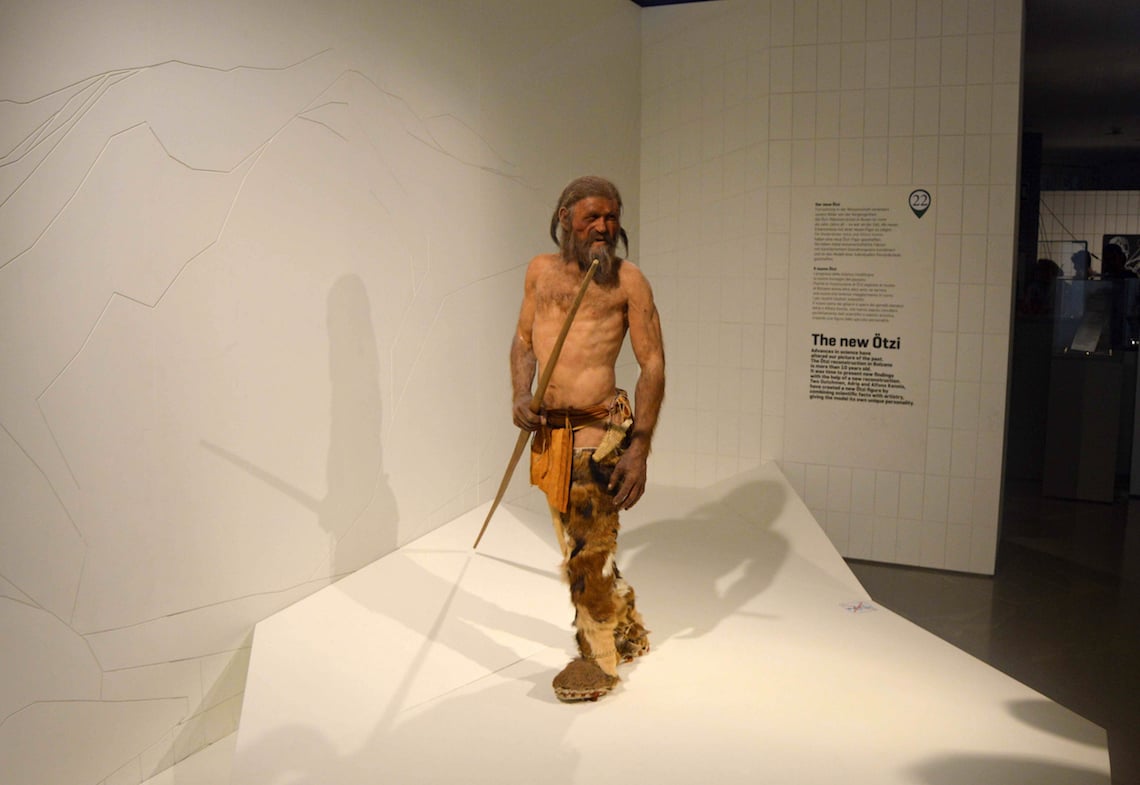 For me, one of the best things about travelling and adventure is discovering the often-fascinating histories of the places I’m visiting. Italy has such a wealth of historical sights and attractions, like the Colosseum in Rome, or the remarkably preserved temple of Concordia in Sicily, but one of the most incredible relics from time gone by is the body Otzi the Iceman.

You may remember the story from 1991, when two German hikers found the unbelievably well-preserved body of a man who lived between 3,345 BCE and 3,300 BCE, on the east ridge of the Fineilspitze. The discovery of the natural mummy was particularly important as it allowed for extensive examinations into the habits and life of Europeans in the Copper Age.

Amazingly, you can head to the South Tyrol Museum of Archaeology in Bolzano, South Tyrol, to see his body and the belongings which were found on him. 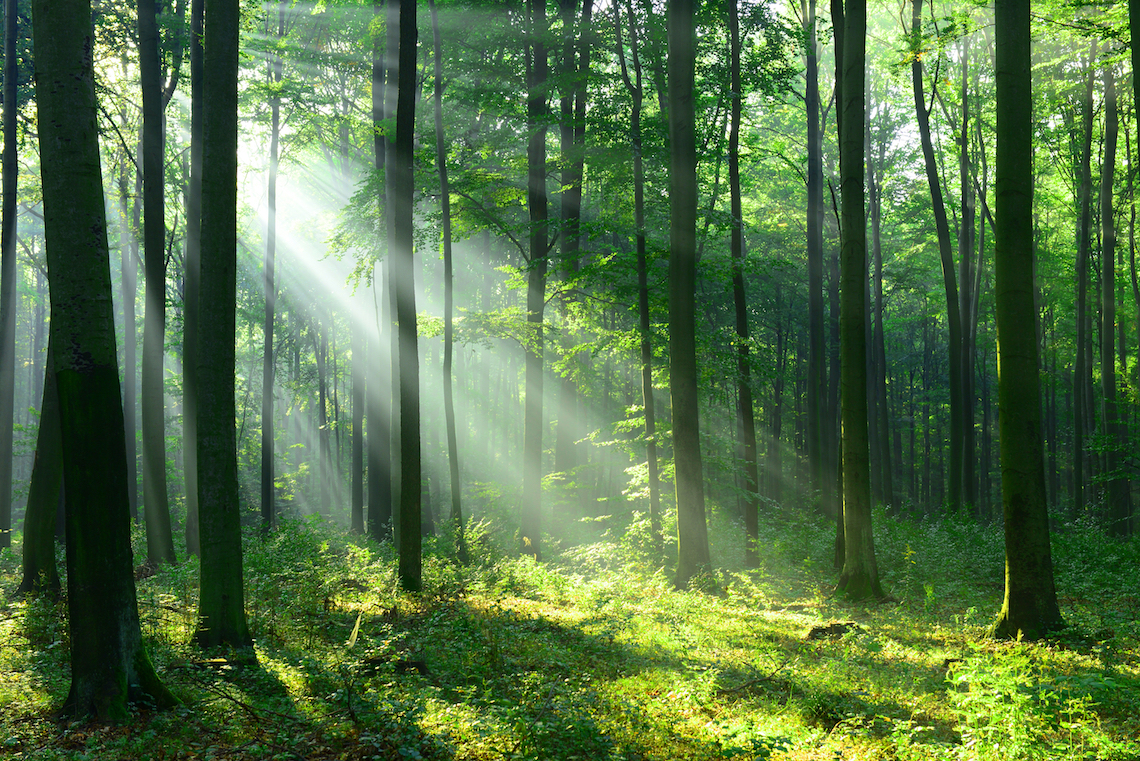 In today’s fast-paced world, life is often overwhelming. Emails always need answering, social media puts a constant demand on your attention, and the news cycle instils anxiety and fears at every opportunity. In South Tyrol, this doesn’t have to be the case. Amongst the snow-capped peaks and the beautiful valleys of South Tyrol, you’ll find a natural remedy for the stresses of modern life: forest bathing.

No, I’m not talking about de-stressing in a bath tub in the great outdoors, I’m talking about a relatively new trend that’s emerged out of Japan. Shinrin Yoku, as it is called over there, was a way to help get people back in touch with nature. It allows you to experience direct contact with nature which is claimed to help reduce stress, promote relaxation, improve sleep quality, inhibit chronic inflammation, brighten the mood, and relieve pain symptoms. By taking your mind and focus away from your thoughts and instead directing them towards nature, the effects are said to be truly beneficial.

VItalpina Hotels of South Tyrol offers guided Forest Bathing sessions as part of the Vitalpina Escapist, where you’ll be taken into the forests surrounding the hotels for 60-90 minute sessions. Vitalpina has a selection of hotels to choose from in the South Tyrol area, so head to www.vitalpina.info to find out more.

Via Ferrata in the Julian Alps 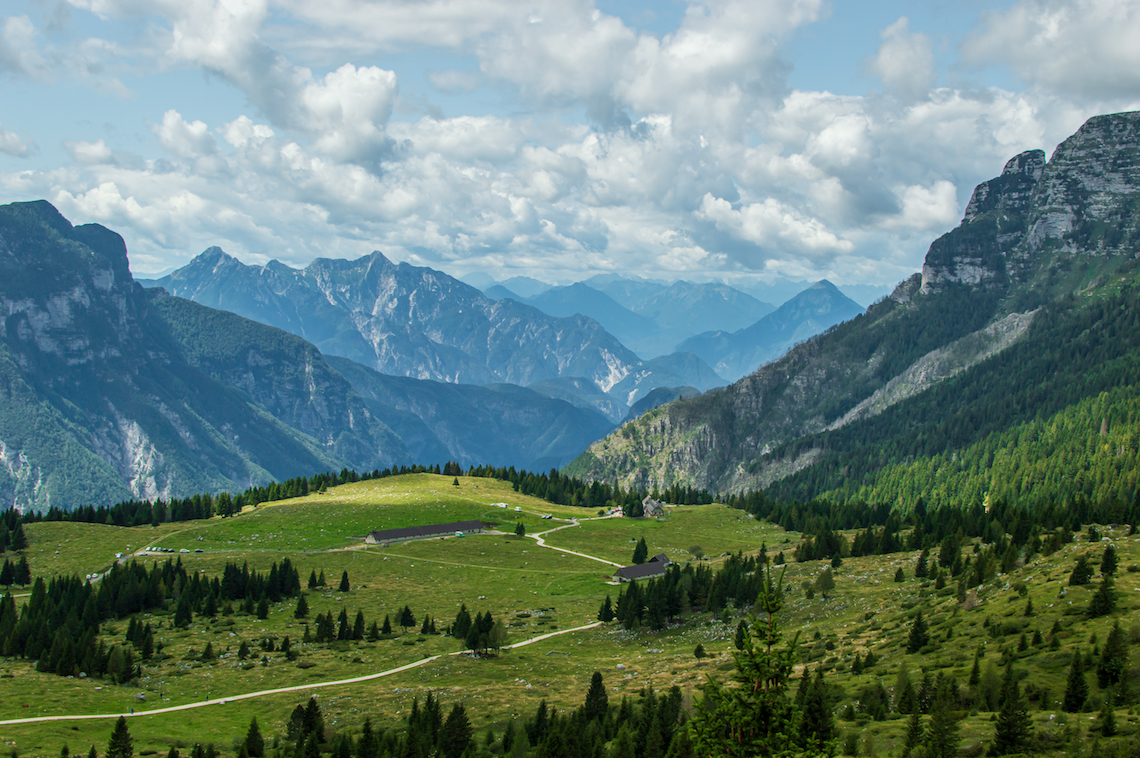 In the north-east corner of Italy, butting up against the Austrian and Slovenian border, rise the Julian Alps. The area is much less popular than the Dolomites, and yet the spiky limestone pinnacles are just as dramatic, spectacular, and vertical as those found further west. The range of outdoor activities and routes on offer, whilst not as extensive, are equally as challenging and in some cases, more so. The impressive five-day Ring of Kugy trail is a classic and demanding ferrata not for the faint hearted or anyone without a head for heights.

Fly in to Trieste and make your way to Tarvisio where you’ll be able to begin the hike up to the Refugio Corsi, an 860m pull above Sella Nevea. The trail to the refuge is easy to follow and takes around two to four hours.

To see more of what’s on offer in the Italian Dolomites, click here to visit the official tourist board website.