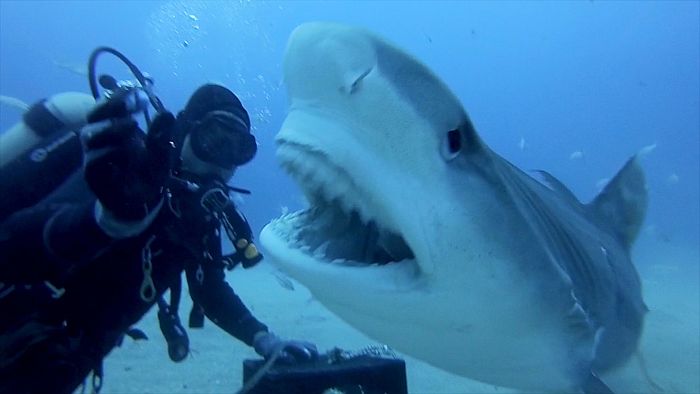 Video of the week: Petting and swimming with sharks

Ever fancied going swimming with sharks? Well normally this tends to be done with a cage in between you and the shark, but these guys showed nerves of steel to ditch the cage and go freestyle.

Our latest video of the week shows Cameron Nimmo and Mickey Smith going diving off the coast of Jupiter, Florida as they meet and interact with tiger sharks. The duo film, pet and feed the sharks in what has to be some of the most spectacular dive footage we have ever seen!

Tiger sharks are considered to be one of the most dangerous shark species to humans and they represent a large percentage of all fatal shark bite incidents. They are one of the largest shark species in the world and have been known to grow anywhere up to five metres in length.

As an apex predator, the tiger shark has a reputation for eating anything but they regularly chow down on fish, sea birds, turtles and other marine animals. Researchers have also discovered evidence of terrestrial animals within tiger sharks such as dogs, cats and horses around the coast of Hawaii.

Knowing this makes it seem even more remarkable that these guys not only swam and petted the tiger sharks, but also fed them. Watch the astounding footage below and let us know what you think!

Watch: Even Alex Honnold falls, sometimes
Watch: Is this the world's most insane rope swing?
Climb the Matterhorn in under 4 minutes
Type to search or hit ESC to close