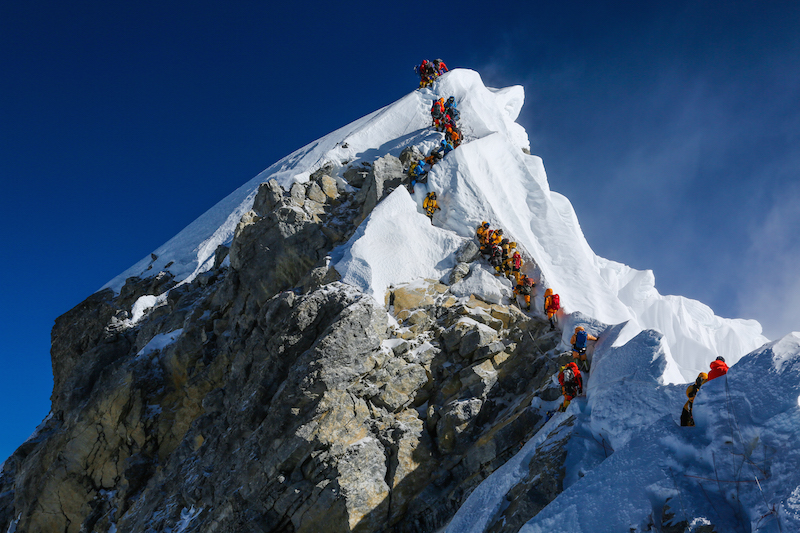 What really happened on Everest this year

Earlier this year Everest was plastered across the media with news of the incredible crowds and congestion high on the mountain. The photos coming off the mountain were sensational, leaving the wider public shocked at what they were seeing. But did they tell the whole picture?

Well, in the latest issue of Adventure Travel magazine, Rob Slade spoke to filmmaker and photographer Elia Saikaly about his experiences on the mountain’s dizzying slopes. Having successfully attempted Everest numerous times and summiting it on three occasions, Elia has a lot of experience on the world’s highest peak.

In the interview, he talks about his failed Everest attempts, breaking his back in a paragliding accident, the tragic avalanches of 2014 and 2015 and the crazy happenings of 2019’s Everest season. Below, you’ll find a snippet of this fascinating interview, while the full article can be read in the latest edition of Adventure Travel magazine.

You’ve been visiting Everest for over a decade now. How has the mountain changed?

The mountain itself pretty much stays the same, you know, there’s a larger human footprint now, with more and more climbers climbing year after year. As far as receding glaciers go, you can definitely see it at base camp, that the pinnacles at the base of Everest are melting. They’re not what they were back in 2005. From that standpoint, things look different.

There have been an increasing number of inexperienced climbers, there have been new companies that have popped up since 2005. The queues really blew my mind this year. During those couple of years off I had seen images online that showed these queues, but I had never experienced them firsthand.

It wasn’t until this year, in particular when I was climbing from camp three to camp four, it was alarming how many people were heading up toward the South Col and toward the summit. That was the biggest change that I saw, in addition to the severe lack of experience, preparation and fitness on the part of some climbers. Not everyone, some.

But yeah, there was an incredible amount of people, and just a few key individuals that just really had no business being up there whatsoever. Prepared climbers, strong climbers, experienced climbers, we have the ability to deal with that, we can simply pass, we can get around them, we have the confidence to unclip from the line, but those that don’t end up in long queues. So that was the biggest change for me.

The other thing that I saw this year, which was incredibly disheartening, was the human waste and the trash up at camp four, and there was less snow this year, so it was more apparent. It was just a complete mess up there, and an avoidable mess. I was with Garrett Madison from Madison Mountaineering this year and we carried all of our human waste out; we organised a bit of a cleanup expedition from camp two and flew out two tonnes of garbage.

It’s not that difficult to ‘carry your shit out’. It really isn’t, it’s just people are lazy and people just don’t care. It’s something that could be avoidable if everybody just did their little part, but people don’t, and I understand the rationale behind that. Most people are just trying to survive; 8,000m is a debilitating environment, you’re slowly dying, but, still, it’s just a little bit of extra effort to carry your waste out. I think if everybody did that there would be a massive change on that mountain.

Do you feel like a lot of people are easily blinded by summit fever?

I think the problem lies in the hands of a few. I think, definitely, we see people going to the summit that have no will whatsoever to turn back who are definitely blinded by summit fever and are pushing themselves well beyond their limits. And that’s when you really get yourself into trouble, when you are not humble enough to listen to what the mountain is saying, to what the body is saying, and are not humble enough to turn around.

On my way to the summit – and again, not everybody, it’s just a handful or two – I saw people that were barely able to put one foot in front of the other and they’re just relentlessly digging as deep as they can, giving it everything that they have, not considering their own safety or the safety of those around them. They’re willing to keep going at all costs. The problem is that once you get up there, you’re only halfway there.

How was the congestion this year?

There were just long queues, there were a lot of people going up the mountain and there were unnecessary deaths that could have been avoided. We managed the queues very well, we spoke about them long in advance. Our team of women were very well prepared and they knew that it would be a no go situation if we got caught in queues and they didn’t have the ability to overtake climbers. So, the question I often ask rhetorically is, if the queues were the main problem, then how come the four women from the three Middle Eastern countries had no issues on summit night? Why were they able to reach the top and get down safely with no issue whatsoever?

I put that down to experience, and yes, there were definitely a lot of people up there, but we overtook 40-50 climbers that night and we were well aware of who was climbing and when they were moving. We actually held back 24 hours and stayed in the death zone on oxygen to allow some of the traffic to make its way up so that it would be safer. It was when we were coming down that I saw a line-up of climbers heading up to the summit around 9am, just below the South Summit, which is a difficult area to overtake.

It’s very narrow coming over the top and then down toward the Hillary Step. There were 100+ people jammed back to back and, at that point, unless you’re willing to completely get off the line, no one is letting you past. People were so tightly crammed in together that you’d have to be a really confident climber and completely get off that line to overtake there. So that was a very difficult spot. I’ve got to say, thank god we had good weather that day.

When you talk about inexperienced people, what did you see?

You can always tell by looking at how a person walks in their crampons, handles a fixed line, uses their ice axe, navigates the terrain… You can tell immediately who has experience and who doesn’t. There are some people who wouldn’t know how to use their ice axe, or carry it, if you handed it to them. There are some people who are just learning to put their crampons on and are very slow in doing so and there are people who are too terrified to clip and unclip from a safety line in order to overtake a climber.

Climbers who don’t have experience of recognising the signs that their body is breaking down, that they’re going too far beyond their limit because they haven’t experienced extreme altitude, and also people who end up paralysed with fear, they don’t know what to do…

My greatest fear is that one day, when we’ve got 100 climbers in a line, if the safety line snaps or bad weather comes in and one of those lines snap, say above the Hilary Step, how are people going to get down? It could be one of the worst disasters we’ve ever seen and it’s very possible.

Did the number of summit days play a part too?

Definitely, that was part of the problem this year. If you compare this year to last year, you had a nine or 10-day weather window in 2018. This year it was much more narrow, so the majority of climbers headed up on 21st, 22nd and 23rd.

To read the full interview and hear more about Elia’s experiences on Everest, get the latest issue here.

Due out in late 2019 and filmed by Elia, The Dream of Everest documents the story of four women from the Middle East as they attempt to climb Mount Everest. Keep an eye on Elia’s website and social media for more updates.