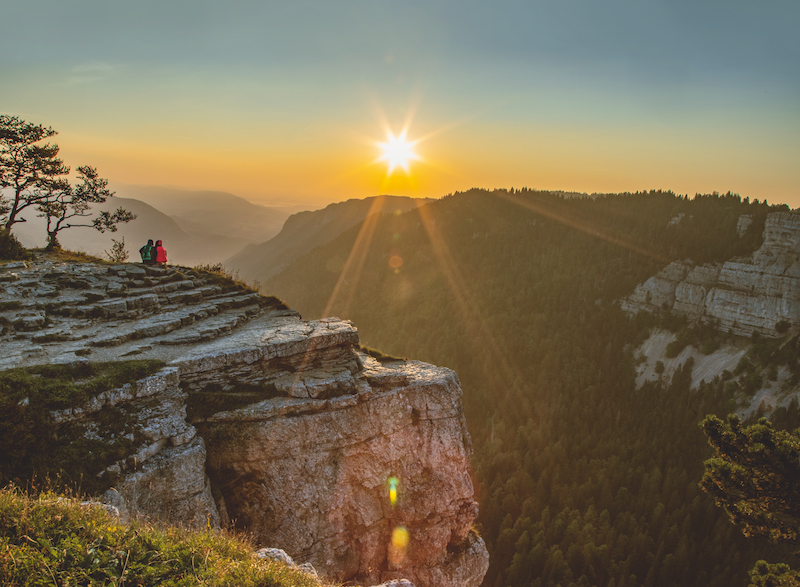 What is the Jura Crest Trail?

The Jura Mountains form a sub-alpine range of ancient folded strata extending from the Rhine Valley in the north-east to the Rhône Valley in the south-west for over 220 miles, along the border between France and Switzerland. The range is a rolling showcase of natural features including deep gorges, mountain streams, glistening lakes (including the highest mountain lake in the Jura), tranquil forests, extensive alpine pastures and craggy, exposed cliffs.

The Swiss love to hike, and as a result have set up a comprehensive and extensive network of trails (over 40,000 miles!) throughout the country. In particular, seven designated national long-distance hiking routes have been established, including the Jura Crest Trail. The trail is regarded as the Swiss classic long-distance path, with many waymarkers plotting the route as early as 1905, making it fairly easy to navigate.

Why should I do it?

The Jura Crest Trail extends for 192 miles of the Jura Mountains, passing through two language regions (German and French), from the small town of Dielsdorf (nine miles from Zurich) to Nyon (16 miles from Geneva), situated on the shores of Lake Geneva.

The day-to-day journey can be a challenge, with up to 20 miles of trails and 1,700m of height gain in one day. With over 13,800m of ascent throughout the 192-mile journey on easy-to-moderate hiking paths, the trail requires a medium level of fitness. When you take in the immense views of the Jura range, the peaks and ridges of the Alps on the horizon, and across the Rhône Valley, the sense of achievement more than compensates for the distance and height gained. Exertion apart, the trail provides an enjoyable and relaxed trek, accessible to most, with many options to descend off the trail to local shops or other amenities.

The main draw of the Jura is its year-round prospects to explore. Snow can fall throughout the winter, as late as April and as early as October, providing opportunities to snowshoe, ski tour or cross country ski. The spring, summer and early autumnal months offer extensive hiking opportunities with marked paths throughout the region.

A great pleasure of the Jura is derived from the many changes in its character as it moves from the north-east to the south-west. Throughout the Jura, nature reserves and protected areas are enforced to ensure wildlife and flowering plants are safeguarded. The Jura is famous for having up to 950 flowering plant species alongside extensive forests due to its limestone base.

Another delicacy of the Jura, which is found extensively throughout delicatessens in the UK, is Vacherin Mont d’Or, a soft cheese that is baked in the oven and served over boiled potatoes. The cheese is encased in locally felled spruce, to give it a very distinctive flavour.

For geology-lovers, wonders are extensive throughout the Jura, with the Creux du Van, Aiguille de Baulmes, Dent de Vaulion and La Dôle being the most iconic. The Creux du Van sits above the town of Noiraigue, a perfect example of Jura limestone with an impressive 160m-high vertical rock wall amphitheatre within a valley half a mile wide. The Jura Crest Trail passes along the top of the natural auditorium, providing extensive views.

The Jura not only offers nature, delicacies and extensive trekking, it is steeped in history too. Due to its close proximity with the border of France, the southern Jura was heavily guarded during WWII, of which many defences can still be seen. From ‘toblerone’ tank traps to bunkers hidden high on vantage points, there is plenty to discover. Allied prisoners of war, Jews and smugglers also made use of hidden routes to cross the Jura Mountains through the Grand Risoux forest, into the safety of Switzerland. Museums are located throughout the Jura, such as the Vacherin Le-Pelerin in Les Charbonnières, which offers very detailed information about the local history.

Transport throughout Switzerland is extremely efficient and reasonably priced. Accessibility is fundamental in providing the day or weekend hiker with ease of travel throughout. There are international airports at either end of the trail and the reliable Swiss railways system (SBB) allows you to travel elsewhere. Geneva Airport can be accessed in less than 20 minutes from the lakeside town of Nyon at the end of Stage 14. Local post-bus routes over mountain passes can be found throughout the 14 stages, enabling ease of travel, shortening the trail and giving more independence to walkers themselves.

Throughout the 14 stages of the Jura Crest Trail, there are many options to choose from, enabling the hiker to select the most appropriate to their needs. With the Jura Crest Trail being fairly close to civilisation, there is always accommodation available either on, or near the trail. Throughout the Jura, Swiss Alpine Club huts are available as cheaper, self-catering options compared to hotels. With a selection of bed and breakfast, camping and hostel accommodation also available, the choice is fairly extensive.