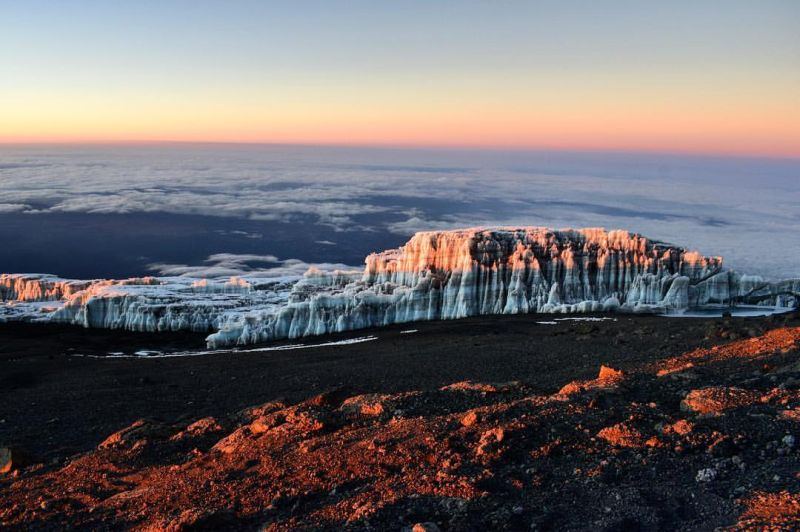 Mount Kilimanjaro: How it really feels to stand on the roof of Africa

We’ve all seen the staggering photos of Mount Kilimanjaro, embossed on the Tanzanian landscape, a glittering beacon of African beauty. I’m sure we’ve all read the articles on how to prepare yourself for the challenge and the trekking guides too – but how does it actually feel? To stand on the roof of Africa.

Having not yet climbed the mountain myself, I spoke to 11 people who have completed this magnificent feat to find out how it really feels to trek to the summit. I was blown away by the responses I received. The inspirational stories, moving memories and mixed emotions were touching.

So, without further ado, here are some of the incredible stories that were shared… 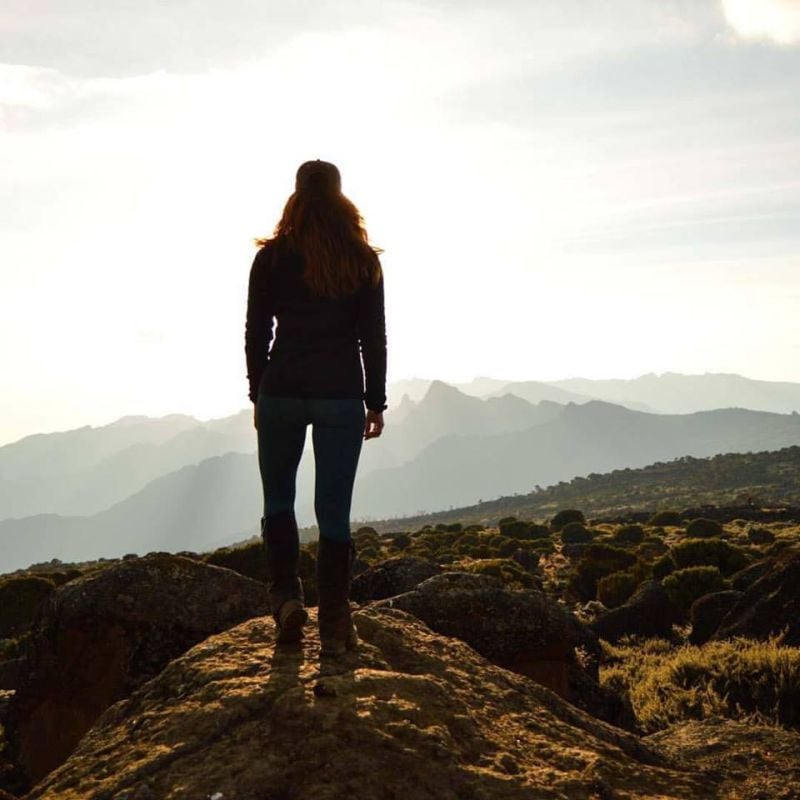 Hayley Adlam: “I cried. I cried so many tears. Happy tears filled with relief, exhaustion and ecstasy. Dawn had started to break and we there watching the sunrise, feeling the cold that had penetrated every ounce of our being, finally being released as the warmth of the sun came over the horizon. It was breathtaking. The glow of the sun across the crater, the sparkle of the sunlight twinkling on the icy glaciers – there are no words to describe the immense beauty that this harsh but phenomenal landscape beholds.” 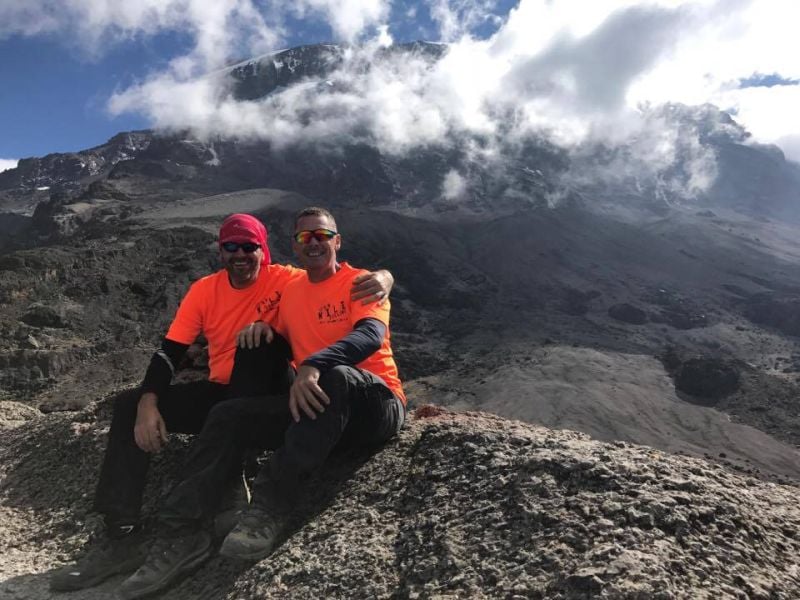 Craig Keeling: “With about 500m to go, I really started to have my doubts if I would make the summit. At sea level that distance would take me a couple of minutes to walk, but it took me nearly an hour! When I finally reached the top, I was completely overwhelmed by it all. I had a photo at the famous sign, then walked off and sobbed my heart out. It was a mish-mash of exhaustion and relief that I had made it.” 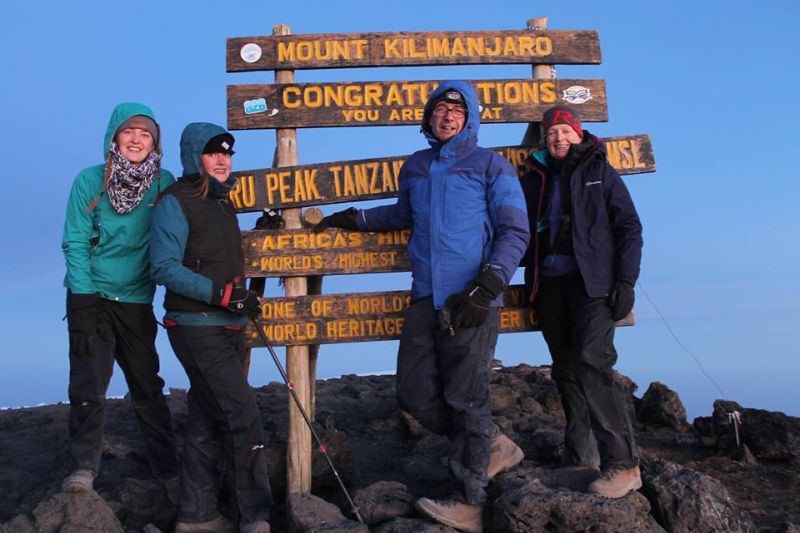 Gemma Hayward: “Those last 30 minutes to the summit felt victorious. I was relieved, exhilarated and pretty emotional! We arrived at the summit at 6:30am, perfect timing for the sunrise. The sun lit up the surrounding glacier and peaks, and the pink sky turned the ground into a glittering carpet of icicles. It was heart-warming.” 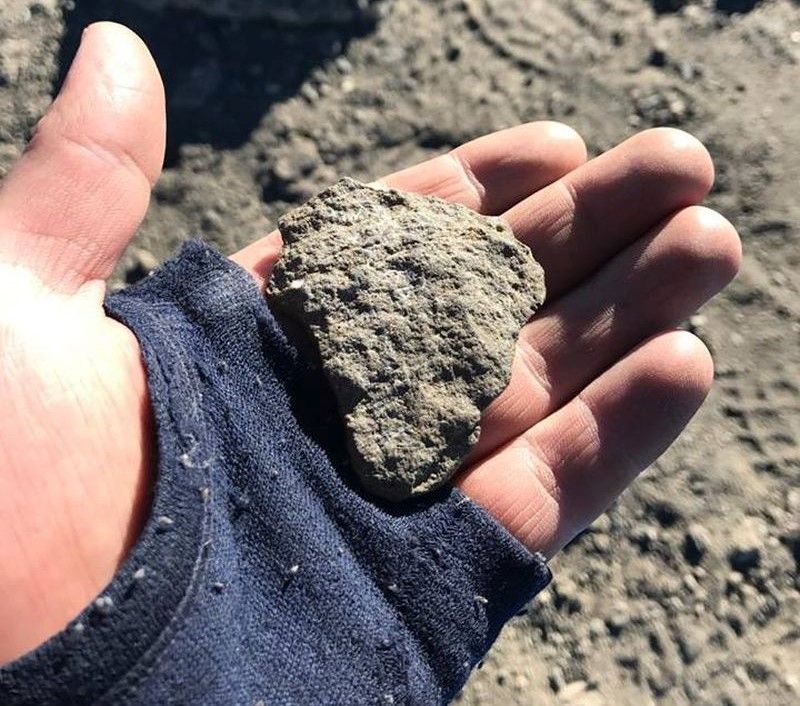 Baldur Finnsson: “A certain rock travelled with me. This rock was incredibly special to me as my little sister had chosen it for me to carry all the way to the top, so that she could be with me through my whole adventure. I simply broke down into tears when I finally took it out of my bag to place on the top of Africa. I remember feeling immensely proud. The summit view was absolutely stunning and I don’t think any words could really give it justice.”

Tris Rowcliffe: “One of the things I remember most about the final summit night was the trail of head torches that could be seen along the route, twisting and turning up the mountain, ahead and behind me through the darkness. I can remember the final 100m to the summit vividly. When I saw the sign for Uhuru Peak, I’m not sure if it was the cold or the altitude but I started to cry. I was overjoyed to have made it there for sunrise. I sat watching the sun rise over Africa absolutely elated with fellow climbers who had made it – a moment that will stay with me forever.” 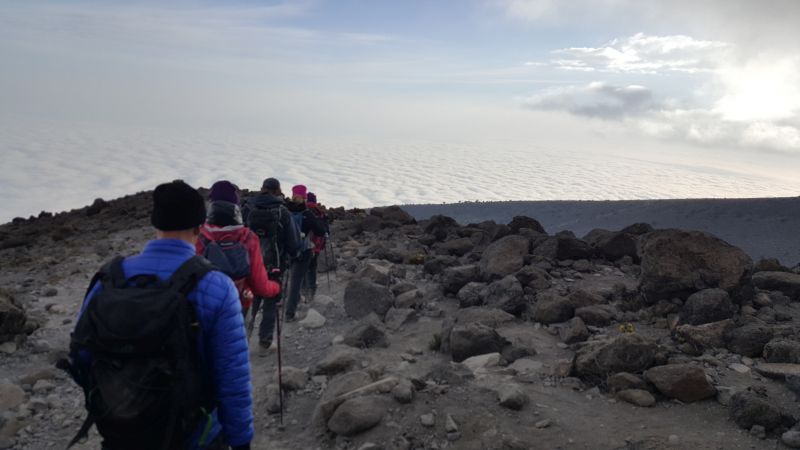 David Berry: “I felt relief as I had struggled about half way up. It was steep, very cold and blowing a hoolie. I supported other members of the group who were really struggling with the final stages toward Stella Point, so I reached the top feeling pretty exhausted. Once I reached the summit I thought about my wife and two boys. It was pretty spectacular. The most impressive part for me was the glacier at the summit and also being way above the clouds. Well worth the efforts for the views.” 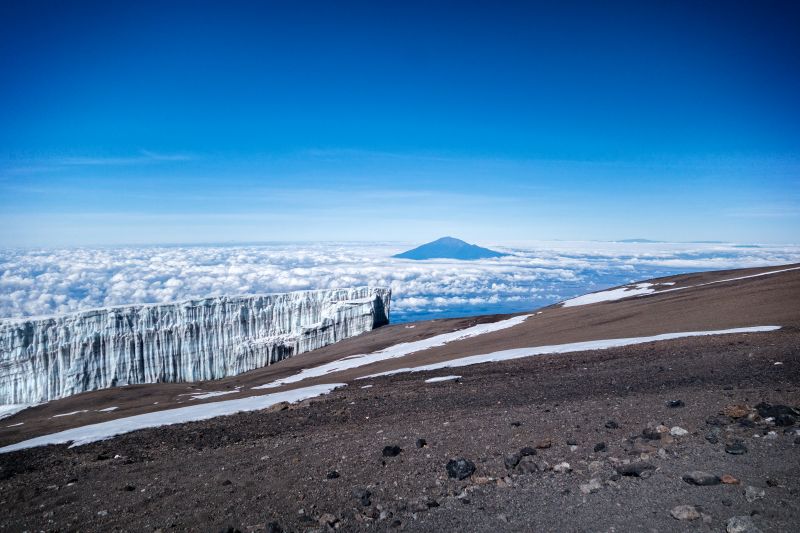 Christine Jackson: “I was very proud of myself and my other half due to us normally being ‘couch potatoes’. I was so happy that we managed to get that far, our achievement was brilliant – not many people can say they did what we did on a Tuesday morning! We had an amazing view to watch the sunrise, it was stunning. To share that with somebody that you love, was phenomenal and it was the best experience of our lives. It has made us closer as a couple.” 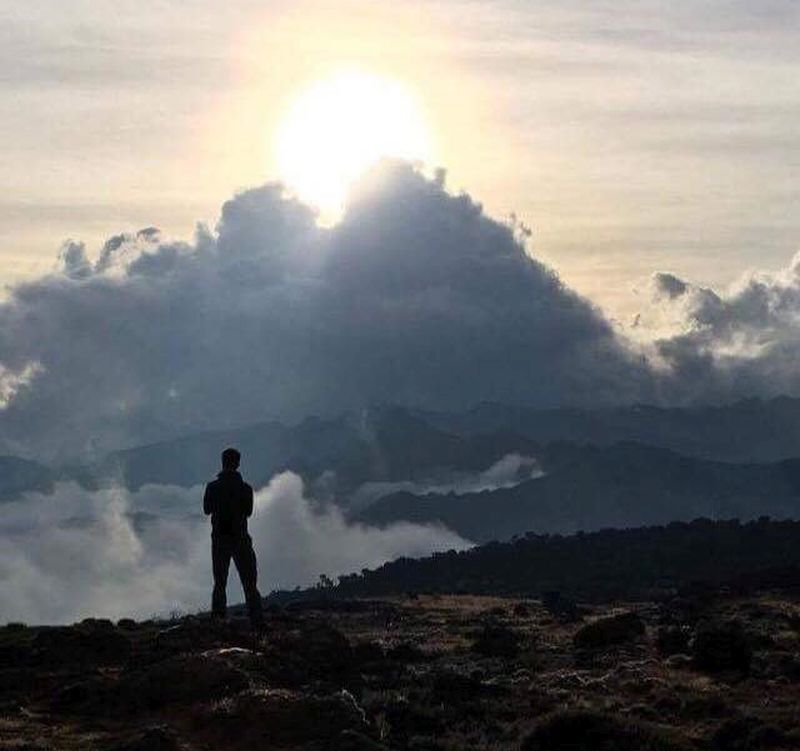 Duncan Mcshea: “It was a mixture of pride, joy, relief and exhaustion! There are few words that describe the views at the summit. You could say something like majestic but it almost doesn’t do it justice. You can see glaciers in their entirety and being above the clouds looks as if it’s an endless ocean!” 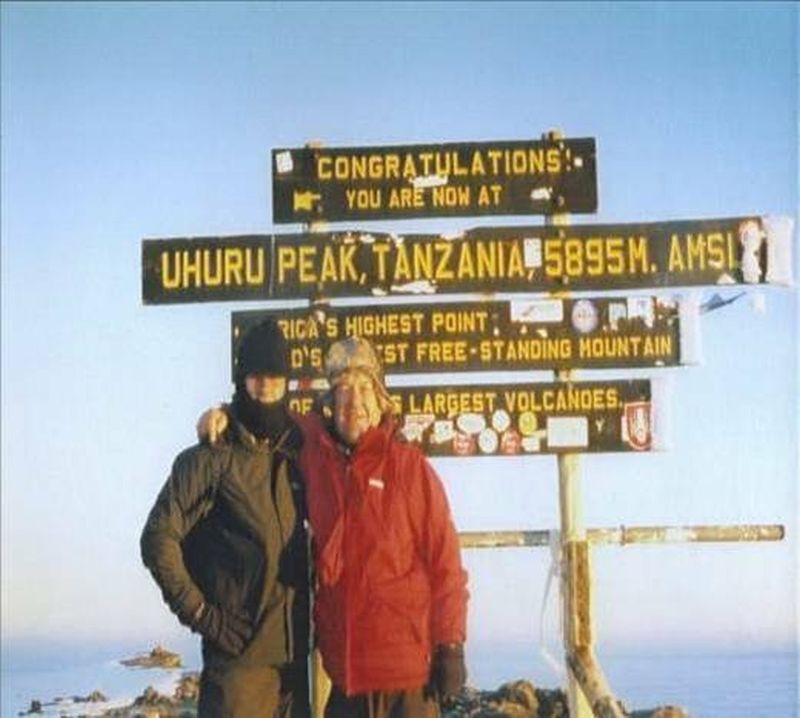 Julian Evans: “It is always a privilege, to make the summit of a mountain, but even more so because I was with my father – it made for a special moment. The view was just stunning. Beautiful sunshine on the ice wall around the crater.” 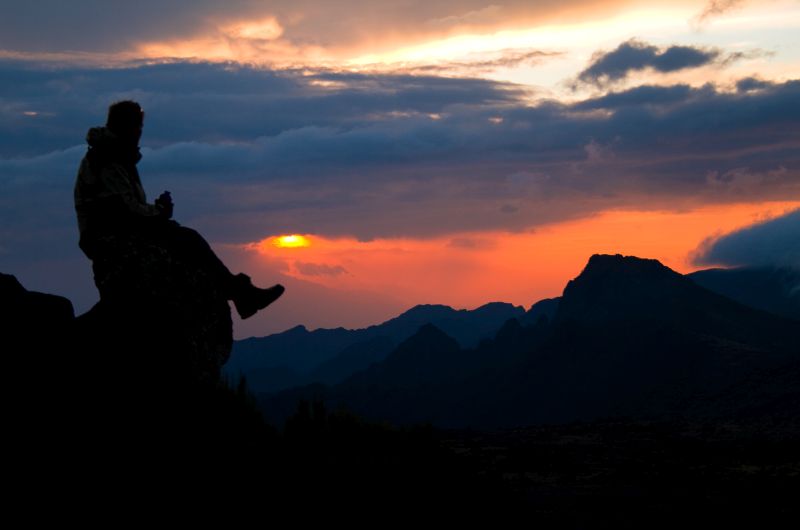 Patrick Kinsella: “Getting to Uhuru Peak made me feel properly euphoric… and a bit sick! It was freezing cold and my water bottle had frozen solid, even though I kept it under my clothes. We reached the roof of Africa just as a new day dawned, with the rising sun setting the epic landscape below us on fire. Ephemeral clouds were flitting across Tanzania on one side, and Kenya on the other. Virtually within spitting distance of the Equator, we were standing by a glacier – it was special.” 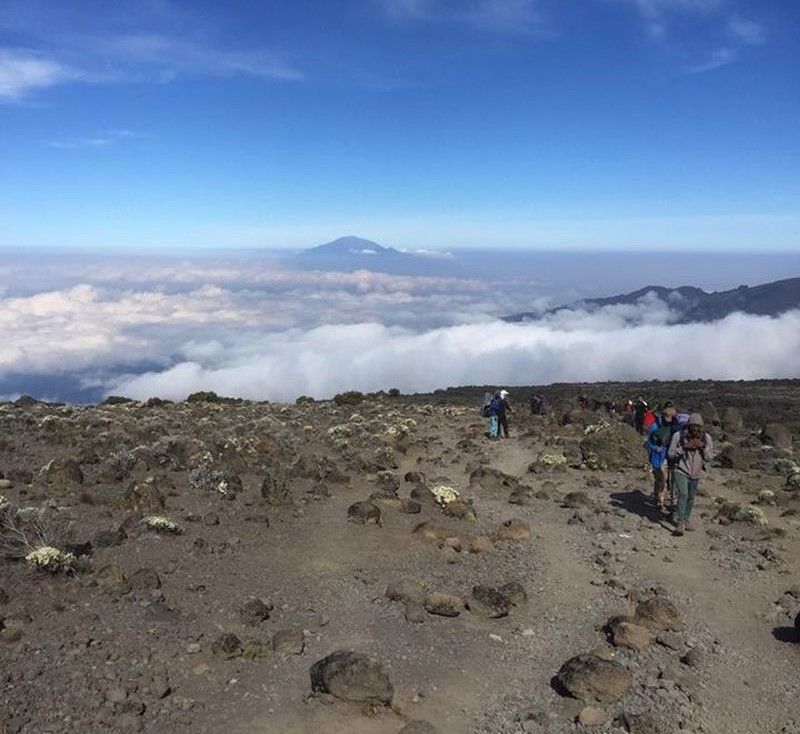 Ben Falconer: “Reaching the summit has been one of the best experiences of my life. All the training and hard work had finally paid off, I felt a sense of achievement as I’d accomplished what I had set out to do – to stand on the roof of Africa. It was really emotional at the top, everyone was ecstatic and exhausted at the same time. One lad threw up at the top so I didn’t manage to get a decent photo! But the view from the summit was pretty crazy and breathtaking.” 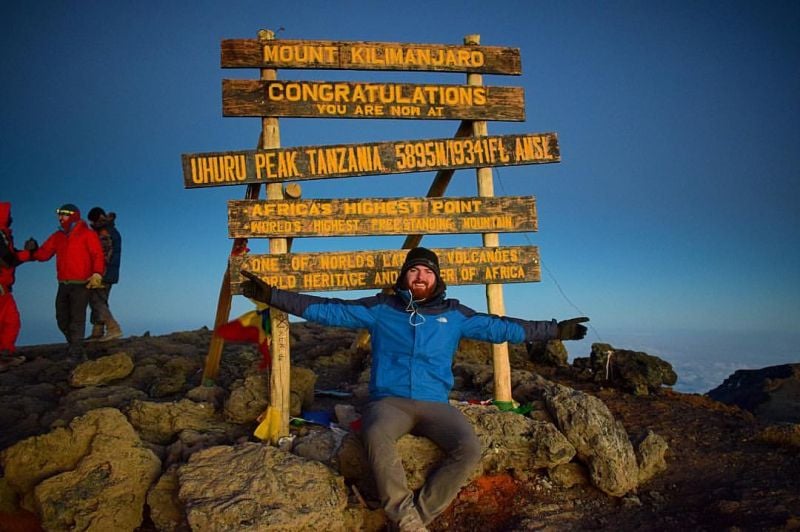 Not only will you trek past open plains and snow-capped peaks on the spectacular Machame route to reach Mount Kilimanjaro’s magnificent 5,895m summit, but you’ll help fund ground-breaking research, advanced equipment and child/family support services. This is a challenge for anyone with adventure in their hearts.

To sign up or to find out more about the Great Ormand Street Hospital Children’s Charity’s Mount Kilimanjaro challenge visit www.gosh.org/kilimanjaro

Discover Austria: The best things to do in Kitzbühel in Tirol
6 awesome places to visit in Ethiopia
The Ultimate Adventure Road Trip Through North Wales and Cumbria
Type to search or hit ESC to close
We use cookies to ensure that we give you the best experience on our website. If you continue to use this site we will assume that you are happy with it.OkRead more