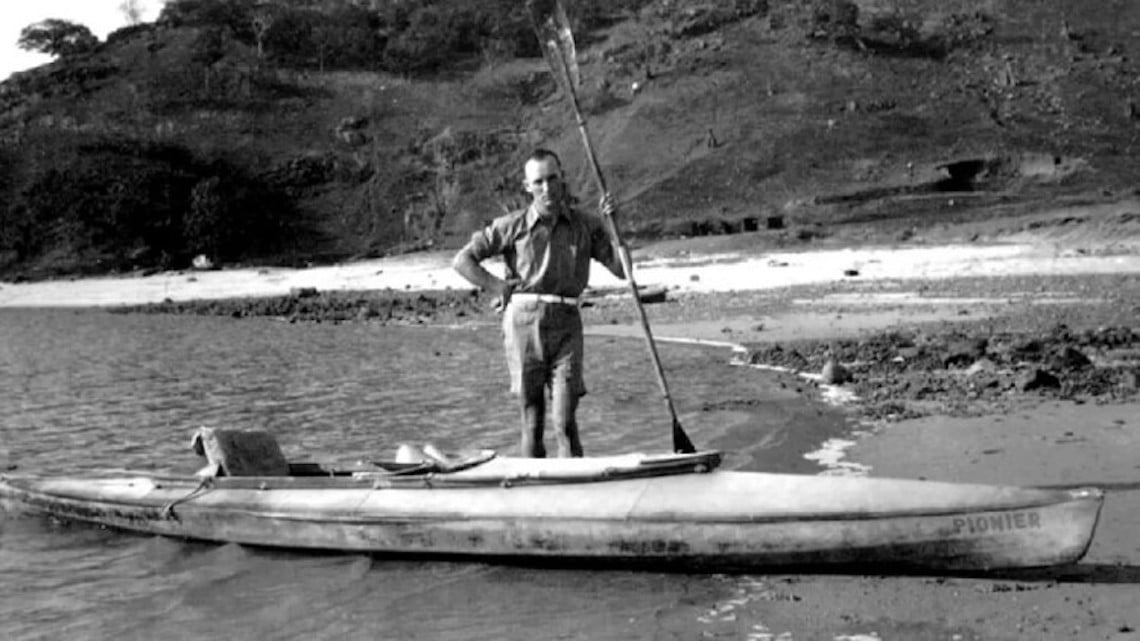 Oskar Speck: Meet the man who kayaked the world in the 1930s

In the 1930s, Oskar Speck embarked on one of the world’s most daring kayaking adventures as he paddled from Germany to Australia. As part of our ongoing History’s Heroes series, Roger Bunyan has his remarkable story…

Who was Oskar Speck?

Oskar Speck travelled by kayak from Germany to Australia during the 1930s and faced many dangerous situations along the way.

Oskar Speck was born in 1907 in the north of Germany. At the age of 14 he left school and started work, but his life changed forever after he began kayaking. During the 1920s the sport was spreading throughout northern Europe, where cheap collapsible kayaks, known as faltboot, were all the rage. They had a rubberised canvas skin stretched over wooden ribs. Unfortunately, after the Great Depression hit Germany, Oskar found himself without a job.

He decided he would kayak to Cyprus, where he had heard miners were required. Oskar disregarded the warnings that there might be a host of risks involved and that he had no money for the journey. He also ignored the fact that he couldn’t swim!

In May 1932, from the German town of Ulm on the River Danube, Oskar began his journey. He followed the river from Germany to Romania, where he decided that the Danube journey was too tranquil. So, on reaching the Vardar River, near the Bulgarian border, he continued down that and out into the Aegean Sea.

He now had to learn how to travel at sea. With high swell and large waves, it wasn’t easy in his collapsible kayak. Having never experienced sea kayaking before, not long after beginning this sea leg, he experienced a near collision with an ocean freighter.

Oskar modified his kayak by adding a small sail for greater speed and added splashguards in an attempt to keep water out. He gradually made his way through the Mediterranean by island hopping along the Greek islands, after which he kept close to the Turkish coast.

On reaching Cyprus, Oskar realised he was enjoying his adventure too much and decided to keep on paddling – all the way to Australia! He headed eastwards to Syria and then made his way to the Euphrates River. Paddling along the Euphrates was challenging because of the intense heat and lack of available food and water. He was also regularly shot at by local inhabitants. Further on, he experienced a ferocious storm, which resulted in his being stranded on a tiny river island for a week in the company of a decaying corpse!

Eventually, Oskar reached the Persian Gulf, where he paddled along the coast as far as Bandar Abbas, Iran. He stayed there for six months waiting for a replacement kayak. Unfortunately, while waiting, he contracted malaria, which continued to plague him for the remainder of his journey. In September 1934 he moved on, eastwards into the Arabian Sea.

Eventually, Oskar arrived on the coast of Balochistan at the far western extent of British India. Travelling along the coast, his fame went before him as he stopped off at various ports. From maharajas to the colonial community, he was regularly taken-in and looked after. In return, Oskar provided them with tales from his journey. His now celebrity status helped provide needed donations of cash for his trip.

With the rise of Nazi Germany, some were suggesting that Oskar was a German spy. There were hints that his vessel could turn itself into a diving machine and could even fly! Therefore, on reaching one port, he was arrested by the authorities until being subsequently released after two days. Oskar finally reached Colombo in Ceylon (Sri Lanka), where he decided to stay for three months while sitting-out the monsoon season.

Continuing, he picked-up another replacement kayak in Madras (Chennai) before travelling along the north-east Indian coast, arriving in Calcutta (Kolkata) in January 1936. By the April of that year he was kayaking along the Burmese coast. Oskar found himself paddling once again in deadly monsoon weather.

He was sometimes driven off course and there were other occasions where he spent 30 or 40 hours paddling non-stop! On leaving Singapore, after replacing his kayak once again, he crossed the equator and headed for Batavia (Jakarta). From here, Oskar continued to paddle in an easterly direction, but his progress was slow. He was often totally exhausted, sunburned, thirsty and unable to find food. On a couple of occasions he had to halt his journey, once due to the return of malaria. 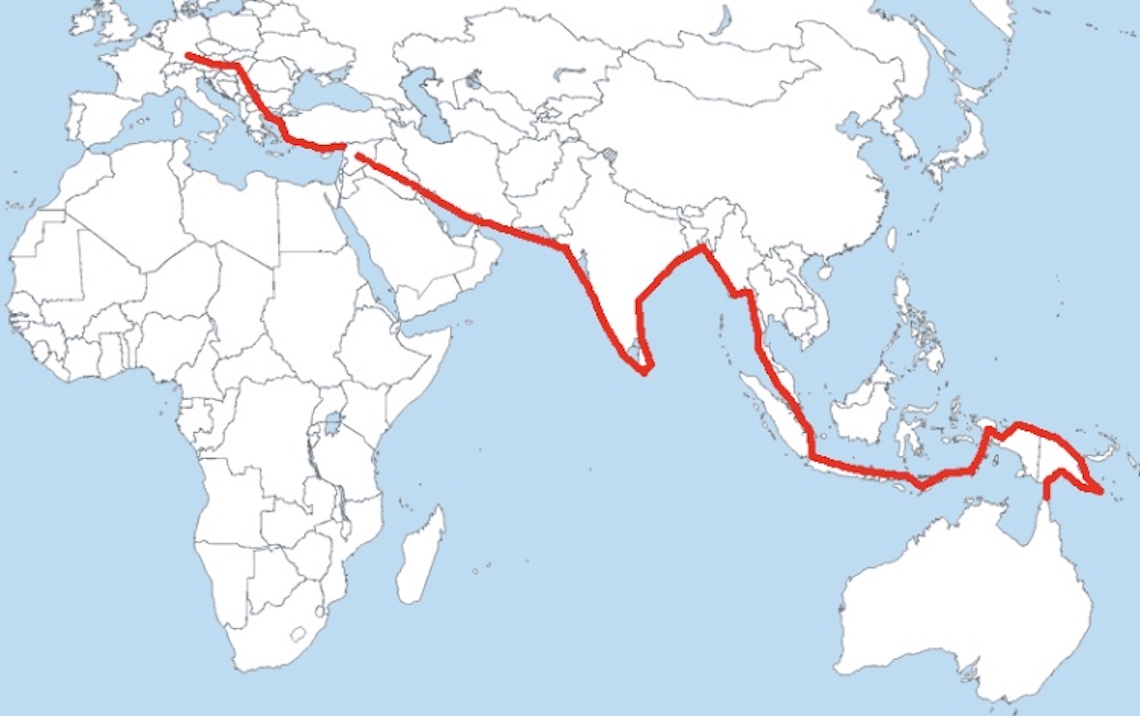 There were other times when the usually welcoming local people became decidedly unfriendly, probably due to an inability to communicate. One night, as he slept on the island of Lakor in the Dutch East Indies (Indonesia), he almost lost his life. Twenty local islanders severely beat him up, leaving him semi conscious and with a punctured eardrum. After being tied up, Oskar managed to chew through his tethers and escaped in his kayak! It took him a whole year to recover from the attack.

Even after such a major setback, this single-minded adventurer was determined to achieve his goal. The Dutch East Indies authorities would only allow him to travel the much longer route around the north of New Guinea. This was a far more testing journey, but he eventually succeeded in reaching Port Moresby by August. It was a tropical environment of torrential daily downpours and crocodile infested mangrove swamps.

Oskar Speck finally reached Saibai Island in the far north of Australia, early in September 1939. After 30,000 miles and seven years and four months, Oskar had finally succeeded in paddling his kayak from Germany to Australia! A small group of locals had gathered to greet him, including three policemen. A report in the Australian Post described the meeting:

“Well done, feller! You’ve made it – Germany to Australia in that (pointing to his kayak). But now we’ve got a piece of bad news for you. You are an enemy alien. We are going to intern you”.

As Germany and Australia had just declared war, the adventurer was imprisoned and spent the following six years in Australian Internment Camps. During that time, Oskar managed to escape once and was constantly in trouble with the prison authorities. Unfortunately, amidst the turmoil of those war years, his remarkable adventure was largely forgotten.

In January 1946 Oskar was released. Within four days of being set free he had arrived at opal mines near Melbourne. After a few years he had become a successful opal dealer and an Australian citizen. He built a home overlooking the coast near Sydney where he lived with his partner, Nancy Steele, for the last thirty years of his life. Oskar Speck passed away in 1995 aged 88.