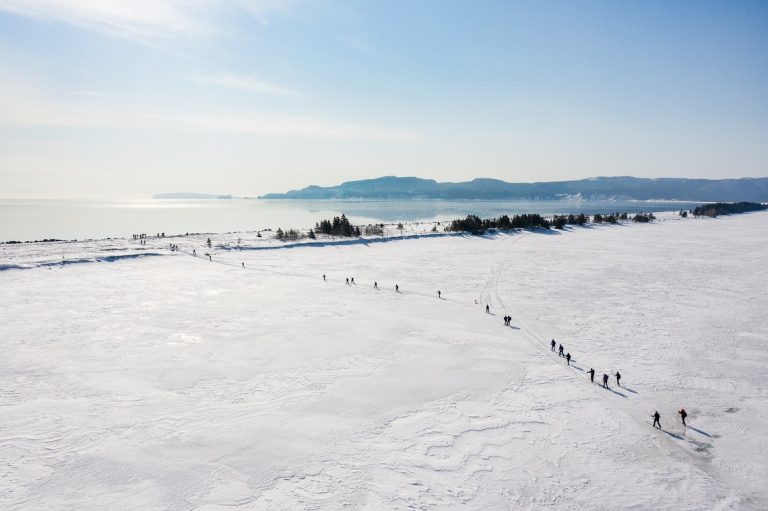 Once a year, avid SNOW TREKKERS from all over the world gather on Quebec’s eastern shores for the famous TRAVERSÉE DE LA GASPÉSIE and the chance to SKI across the sea

In town, the winter festival was in full swing. A throng of schoolchildren gathered around the accordionist and burst into song. It was just the kind of hearty encouragement we needed; after all, 125 of us were about to attempt to ski across the sea.

Every year, for the last week of February, cross-country skiers and some 50 snowshoers come to the small town of Gaspé on the eastern shore of Quebec for the start of the Traversée de la Gaspésie, one of the most joyous ski odysseys I’ve experienced. The event was founded back in 2003 by local entrepreneur Claudine Roy, with the rather ambitious aim to provide an “all-inclusive sporting adventure in the enchanted landscape of Gaspé, to unite men and women of all ages, all professions, and from all over the world,” and 17 years on, that’s exactly what it is. 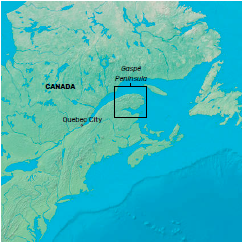 The headline attraction here is the magnificent coastline — a tour of the Gaspé peninsula has been ranked by Lonely Planet as one of the world’s top five coastal journeys. But for Britons, any trip to Quebec is an adventure. Culturally, the Quebecois are very French, with their love of music and a unique camaraderie, so rather than signing up for some hideous test of endurance, I found myself embroiled in a kind of singalong ski trek — and I was totally sold from the start.

While you don’t need to be a good skier to do the Traversée, you do need some experience under your belt, particularly in snowploughing on cross-country skis to get downhill safely, and using your poles as brakes. There’s plenty of opportunity to get in some practice en route before the event, though, because flights arrive into Montreal, Ottawa, or Toronto where there are numerous trails to get you started before flying on to Quebec City.

The piano-playing and dancing had already started at breakfast in a fishermen’s café at l’Anse au Griffon, where event founder, Claudine Roy, set us off along the snow-covered beach.

Soon we were climbing up to magnificent views of white cliff faces jutting into the azure water. It felt a world away from the wide, manicured pistes of the ski resorts. At times, the 4-mile route ahead seemed impassable and we had to take off our skis to walk up the narrow path cut into the cliffs. I’m not opposed to walking, but why plod up a hill only to plod down it again? Especially if you can experience the sublime thrill of gliding down — the perils of the descent matched by the stark menace of the wintry landscape. And on this occasion, our reward was a gentle descent over even terrain to the buses, which were to take us down to the frozen bay of Gaspé.

You’d imagine crossing the sea on skis to be a lot like skating over a snow-covered pond, until you take into account that this pond has waves. Crossing the bay was a surprisingly choppy experience, with the snow undulating over frozen waves created by the wind and snow. I couldn’t glide as serenely as I’d hoped, but the sun shone over the rooftops of Gaspé on the horizon as kite skiers and snowboarders whizzed past.

The name Gaspé means ‘end of the world’ in Micmac, the language of the indigenous Amerindians. While I was conscious that I had just skied off the end of the world from their perspective, from a European perspective, I was arriving at the beginning of the new world. On the outskirts of the town I could see a cross erected in honour of the French explorer Jacques Cartier, marking it as the birthplace of Canada in 1534.

The laws of physics state that 7cm of ice is a safe thickness for skiers and 12cm for the skidoo drivers creating our trails. We were on a sheet closer to 20-38cm in thickness, the safe limit for cars and vans.

Nevertheless, as the temperature crept up to 5C I was glad to arrive at the thin stretch of land that would take us to the other side of the bay. On one side was the icepack, and on the other, steam was coming off the open water. When I stopped to take photos on the beach, everyone who passed me joked: “Dive in, I’ll follow you!” Having worked up a sweat during the crossing, the water did look inviting with its little icebergs floating about like bath toys.

The next section of the Traversée follows an old railway line, which went bankrupt after the Great Recession of 2008-2009. Evidence of its former life can still be seen in the snow-filled station halt that looks forlornly out to sea. Gaspésie, like so much of rural Quebec, is being devastated by depopulation. Tourism provides an essential lifeblood for this region and helps keep its traditions alive.

Hospitality is a big part of the Traversée, as it is throughout Quebec. At an inn beside the halt, we enjoyed the most delicious crêpes in maple syrup I have ever tasted before continuing the climb up the railway line and into the mountains, spurred on by the promise of magnificent views of the rock formations at Percé.

For a short stretch, I shared the track with skidoos — a more popular mode of sightseeing for North Americans. Though they slowed as they passed me, they left behind a smell of petrol as they roared off again, so I was glad when our paths diverged. Part of the essence and appeal of the Traversée is to encourage more socially responsible, eco-friendly tourism in these parts — give me skis over a skidoo any day!

As I climbed higher, soon the wisps of cloud turned to mist, and the mist to fog, until I could only see a metre or so around me. Blindly trying to follow the tracks in the snow, I sang our anthem to keep my spirits up, knowing that almost everyone else was either ahead of me or had boarded the bus. I was therefore very relived to catch sight of a familiar purple jacket, and gladly snowploughed down behind Naomi all the way to Percé.

The next morning we watched the sunrise over the frozen sea and bade farewell to the coast, loading our bags onto the buses that would take us inland to the Chic Choc Mountains, the snowiest part of Quebec. Besides having heaps of the white stuff, these mountains also have an abundance of wildlife, which is even more prevalent during the late September version of the Traversée, when more animals can be seen among the autumn colours, and whales are off the coastline.

So far it had been an easy ride in bright sunshine, once again following the two tramlines in the snow, but after stopping for refreshments, the route took a turn up a narrow path, which made it hard to Herringbone*, so hard in fact that the man in front of me resorted to climbing some sections on all fours. Anyone who thinks cross-country skiing lacks the adrenaline rush of downhill skiing has clearly never navigated the kinds of chicanes we encountered on our way into Murdochville.

Icy streams lined our path and the threat of careering into one if we weren’t fast enough on our turns made for some exhilarating downhill runs.

I was relieved when the final stretch of the day was a nice wide piste.

Until 2000, Murdochville was the site of what was once one of the biggest copper mines in the world. Now, what remains of those heady days is a ski resort only open at weekends, and the town looked sorry to see us go as we boarded the buses to head further west.

We skiers had only socialised with the 50 or so snowshoers on the Traversée in the evenings, but the next day was the last with guaranteed sunshine, so all but a handful of us donned snowshoes (the preferred mode of transport as used by the Amerindians before Europeans brought skis over from the Nordic countries) to join their climb of the Monts Vallières de Saint Réal. We trekked up through the forest until we saw it — a spectacular white ridge that rises out of the thick trees like the body of a giant animal half hidden in the foliage, its spine connecting the peaks of its shoulders and flanks. With steep drops either side, the path is too narrow to ski — though I felt a pang of envy when I saw three ski tourers swish down the bowl.

The next day, the promised blizzard was coming in fast. In the wooded trails around the lodge, we were protected, but after an exposed section over a low bridge, I was glad to make it to the tiny Pergélisol refuge 5 miles from the gîte, while everyone huddled around a guitarist clutching hot drinks and watched the thick flakes fall.

When we woke, the roads were blanketed in deep snow. Our goal was to reach the base of Mont Albert itself, but the avalanche risk meant our snowmobiles couldn’t prepare a track all the way. This was fine going up, but snowploughing down in deep powder was near impossible.

At times, I simply had to point my skis straight down the slope, feeling like Eddie the Eagle balancing with my arms each time I bounced off bumps in the snow.

At other times I felt like the original Nordic skiers, clutching my poles together and digging the tips into the snow to slow me down.

As the whole caravan packed up, I hitched a lift back to Gaspé. There, looking across the sea, I vowed to come back and do the Traversée next year. Of course, the world has changed since then. There’s no saying whether I’ll be able to make the next event or if it will even take place, but it has opened my eyes in another sense. Until now, I’ve seen travel as my own slightly hedonistic pleasure, but I’ve rarely thought about the benefits that tourism brings to areas like Quebec.

Today, 55 percent of the world’s population lives in urban areas, according to the UN, and this is set to rise to 68 percent by 2050. If rural locations like the beautiful wild landscapes of Quebec are to remain sustainable, they need visitors like me and you. Tourism may be a luxury for some, but for so many other people, it’s an absolute necessity.

The next Traversée de la Gaspésie is currently due to take place from 20-27 February 2021.

For more on travelling in Quebec see www.quebecoriginal.com and for more on visiting Canada see www.explore-canada.co.uk 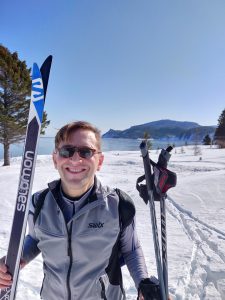 Colin Nicholson started skiing at the tender age of two in Moscow’s Lenin Hills at the height of the Cold War and hasn’t stopped since. His love of languages and different cultures has led him to love the warmth of the incredibly diverse communities that live in the coldest of climates, from forgotten villages on snowy plains to popular resorts in the Alps. Today, exactly half a century after he started skiing, he acts as a ski correspondent for ski magazines and national newspapers, and vows to keep on covering all aspects of the weird and wonderful life of the mountains for another half-century.