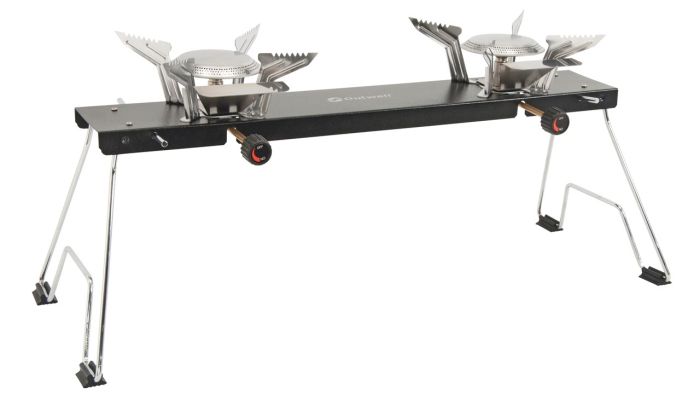 We tried out the Outwell Appetizer Cooker 2 Burner Folding Stove, to check the boil time, temperature control and weight of this new bit of kit…

In complete contrast to Alpkit’s Kraku, here we have Outwell’s Appetizer Cooker 2 –Burner Folding Stove. Whereas you could stuff the Kraku in your pocket, you’d only pack the Appetizer if you were using your car as a base as, while it folds down, it’s probably a bit too big and heavy to carry on your back for a whole day.

The Appetizer features two burners that run off independent gas canisters (so you’ll need to buy two if you want to take full advantage of it). If you’re after a luxury camping experience where there are minimal concerns about knocking a pot of boiling water off a stove, and you’d like to cook your meat at the same time as your pasta, then this is the one for you.

The stove stands on two stable legs and the pot supports resemble the sort that you’d find on home cookers. This leads to incredibly easy and hassle free cooking, and the two temperature knobs offer a great deal of heat control, from a gentle simmer to a full-on boil. In terms of boiling times though, the Appetizer was a bit slow, taking just under six minutes to bring half a litre of water to the boil. While this may be slightly longer than the backpacking stoves in this test it’s a nice reminder of the intended use of the Appetizer. It’s a family camping product and you’re not necessarily going to be in a rush to get your water boiled and your food cooked so that you can hunker down in the tent and get some rest for an intense hike in the morning. No, this is for fair weather campers who are looking to spend the evening relaxing in a camping chair with a beer in hand while swapping stories with mates. And with this in mind the Appetizer is a great stove, and I’ll be packing it next time I’m camping from my car.

Too big for backpacking but perfect for car camping.