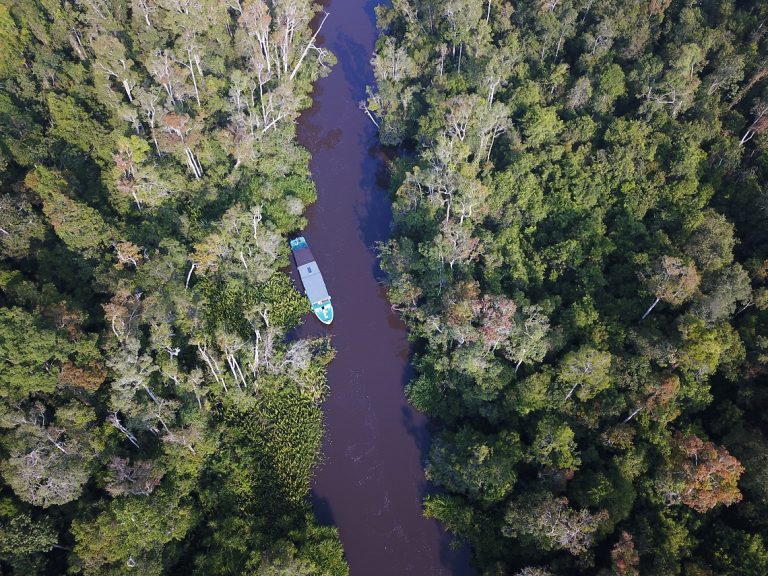 The klotok hammered away as it lumbered upriver towards Camp Leakey, sounding as though it might give up at any minute. Proboscis monkeys darted along the dense treeline, howling in protest at our intrusion. Like Charles Marlow, I have always been fascinated by the blank spaces on maps, and at that moment I felt as though we were travelling farther from the known world than I had ever been. 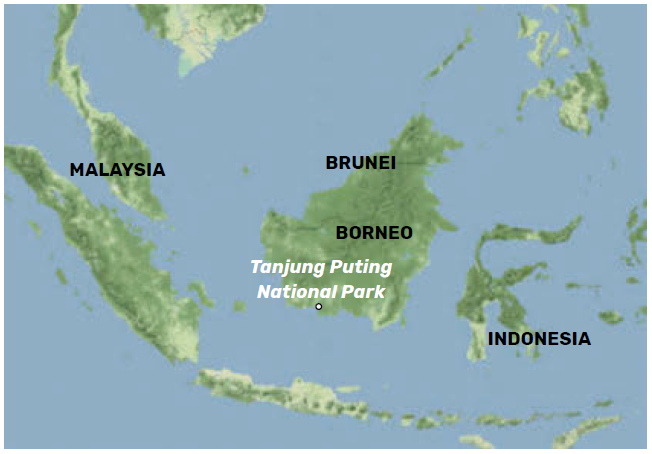 My earliest childhood memories are filled with daydreams of far-off and remote locales. One island has held particular sway over my imagination long into adulthood. Located in Southeast Asia’s Java Sea, Borneo is home to one of our planet’s oldest and most biodiverse rainforests.

After years of dreaming, the opportunity finally presented itself to spend a few days exploring Tanjung Puting National Park. Located in the island’s southern jungles, the area is accessible only by small boats (klotoks), so-called because of the clunking sound they make. This remote spot on the Sekonyer River is home to the orangutan research station at Camp Leakey founded by Dr. Bituté Galdikas in 1971.

Dr. Galdikas is one of three researchers who launched field studies into the great apes, coordinated by the renowned paleoanthropologist Louis Leakey. The other two studies were conducted in Africa by Jane Goodall and Diane Fossey. While the African contingent studied chimpanzees and gorillas respectively, Dr. Galdikas’ focus was on orangutans. She established Camp Leakey as a research base for her fieldwork, as well as a rehabilitation and conservation centre for orphaned and injured orangutans.

The views of the deep blue Java Sea were stunning from above, but as the plane cleared the coastline, the jungle below was shrouded in thick smoke that hung motionless obscuring our views of what lay below. The plane cut its way through the dense brown haze on the approach before making a jarring landing at the small postage-stamp-sized airport in Pangkalan Bun. We were greeted by the expedition’s nature expert, Herman, who would also be acting as our translator and guide.

He explained the details of the trip on the short drive to the docks in the neighbouring port town of Ku-mai, where our klotok and crew waited for departure. Our journey began in earnest at the intersection of jungle and industry, where large container ships were docked alongside shanty towns and small traditional Indonesian fishing boats. We crossed a major shipping lane in order to enter the mouth of the river marking the national park entrance, dodging Chinese freighter ships heading out to sea in the process.

Our first day on the river was spent nature watching from the top deck and trekking onshore to explore the jungle’s dense interior. Herman led the way, deftly wielding his machete through the thick vegetation.

We crept under the jungle’s triple canopy as he pointed out exotic flora and fauna indigenous to the island. Borneo boasts 24 species of venomous snake, including the infamous king cobra, so we were ever vigilant to trek with care. At the same time, though, the beauty and complexity of the ecosystem around us had us spellbound in the grips of its wonder.

As the sun slowly made its way below the western horizon, we retired onboard the klotok under the cover of a mosquito net canopy. With the stars came every manner of flying insect and mammal, attracted to our boat for an easy meal, and we were thankful for the thin barrier of protection from the outside world. Sleep took hold quickly as exhaustion from a day of travel and jungle adventures set in.

SMOKE ON THE WATER

The following morning, we woke to the distinct smell of smouldering. Our first thought was that the boat had caught fire, but the heavy smoke hung all around, hemmed in over the river by the dense jungle lining its banks. Unsure of the situation, we asked Herman for a status report.

He explained that the smoke was due to the systematic clear-cutting of the jungle. Increased worldwide demand for palm oil has led to vast amounts of jungle being consumed by fire and replaced by Chinese palm oil plantations. Palm oil is used in everything from cosmetics to biodiesel, to the foods we eat. The situation has become so grave in Borneo, he explained, that most mornings the air is saturated by smoke. The smoke eventually lifted, as did the anchor, and the klotok continued her upriver leg of the journey.

En route to our destination, we passed a small village that went almost unnoticed save for a dilapidated dock. Located just outside the border of the National Park, Sungai Sekonyer is tucked away in the canopy, and the villagers there thrive on what the jungle and river provide.

Herman took us into the village and introduced us to several locals whose warm smiles welcomed us. He led the way to a small open-air school in the village centre, where a class was in session. The students looked at my large frame and bald head and instantly swarmed me, shouting “Vin Diesel!” All the while flashing their teeth in unbridled joy. I have to be honest I was a little disappointed, as I’ve always seen myself as more of a Dwayne – ‘The Rock’ – Johnson type.

After leaving the village, we made our final push towards the camp. Along the way, Herman pointed out areas adjacent to the National Park that would eventually be burned and replaced with palm oil trees. His hope was to someday purchase a parcel of the land, along with a group of like-minded colleagues, and set it aside as a nature reserve. Unfortunately, they are unable to compete with the palm oil industry’s deep pockets. It seems that man’s incursion on this wilderness knew no bounds.

Arriving at Camp Leakey later that morning, our captain, Akeem, docked the klotok alongside several others like it causing a small traffic jam. Once ashore, we were greeted at the camp’s entrance by a volunteer staff member, who gave us a tour of the facility and explained their mission and conservation efforts.

He shared much of the day-to-day operations, as well as the goals of the research and conservation wings of the field station, as we trekked to a feeding area. Camp Leakey has been an active field station for 50 years, supporting international research into primates such as orangutans and gibbons. Throughout its extensive history, it has welcomed researchers and students in an effort to advance scientific knowledge about the behaviour and ecology of these indigenous primates. The conservation efforts the facility conducts were born out of necessity.

The field station is home to numerous orangutans in various stages of rehabilitation. Increased agricultural activity in the area all too often results in injured adults or orphaned young due to violent human interactions. The staff and volunteers at the camp care for the injured and help to raise the orphans in hopes of eventually releasing them back into the wild.

We watched as several orangutans and a gibbon emerged from the jungle to feed at a station along the camp’s perimeter. As part of the rewilding strategy, they are phased back slowly, the feeding stations are a late phase before being relocated and released. With the steady loss of habitat, the volunteers are to the point of being overwhelmed with the influx of orangutans in need of care.

Unfortunately, some orangutans are never able to fully make the transition back into the wild. One such orangutan was Mario, who came to our klotok outside Camp Leaky, begging for food. He, like many others, has become accustomed to human contact and will remain forever dependent. With the destruction of this crucial habitat, countless other animals are also at risk. The Bornean pygmy elephant, endemic to Borneo as the name implies, is also at risk of extinction. Both orangutans and pygmy elephants are listed as endangered on the International Union for Conservation of Nature’s Red List.

Our time at Camp Leakey eventually came to an end, and we found ourselves moving back down river to whence we came. That night after supper, Herman invited us out for a night trek into the jungle. He explained that the jungle transforms itself in the darkness, and the wilderness comes to life as the nocturnal inhabitants emerge from their daytime dens. We accepted his invitation with trepidation, for fear of what may lurk in the dark. With headlamps cutting through the pitch-black night, and Akeem and Herman both cutting through the foliage, we made our way into Borneo’s heart of darkness one last time. 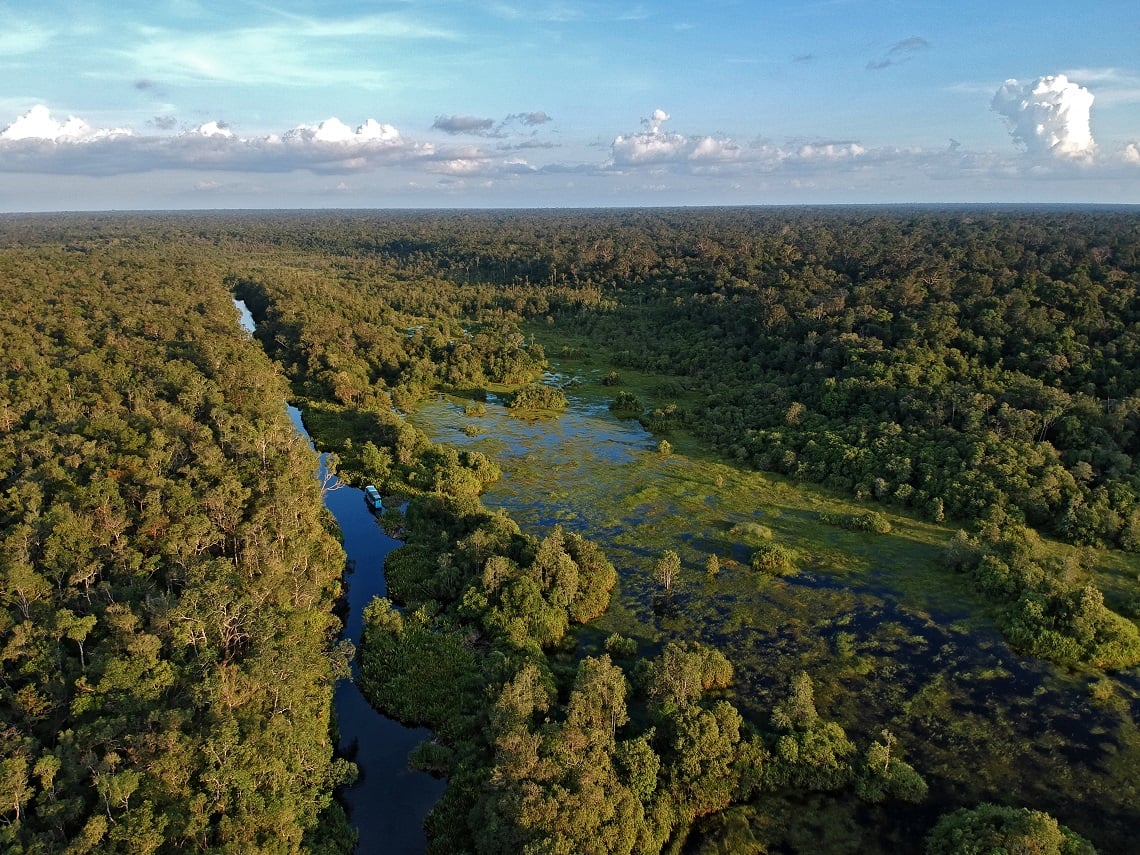 Our hosts led the way to a small clearing in the thicket and instructed us to turn off our lights and stand very still. At that moment, the stars lit the sky and revealed themselves in all their magical splendour. Another world was open to us under the canopy of stars with no protection from creatures of the night. We watched in awe, unperturbed by insect or animal, a world away from the comforts of western civilization.

Our time in Borneo left an indelible mark. It was as though we had been living half-asleep until being immersed in this so-called savage environment. Our bodies and minds ached for more. The insidious spell that had been cast on that river found purchase under that star-filled sky. In the immortal words of Joseph Conrad, “going up that river was like travelling back to the earliest beginnings of the world, when vegetation rioted on the earth and the big trees were kings.” We had come seeking adventure and found a land in desperate need of saving. 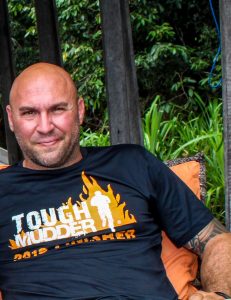 Michael was raised in Arizona, where he grew up exploring the Southwestern United States, Mexico, and Central America with his family. These experiences infused in him a passion for travel and adventure that’s endured throughout his life. He and his wife, Lyndsay, both enjoy travelling and exploring other cultures and customs. With a new addition to their family, they look forward to instilling in him their love of adventure.