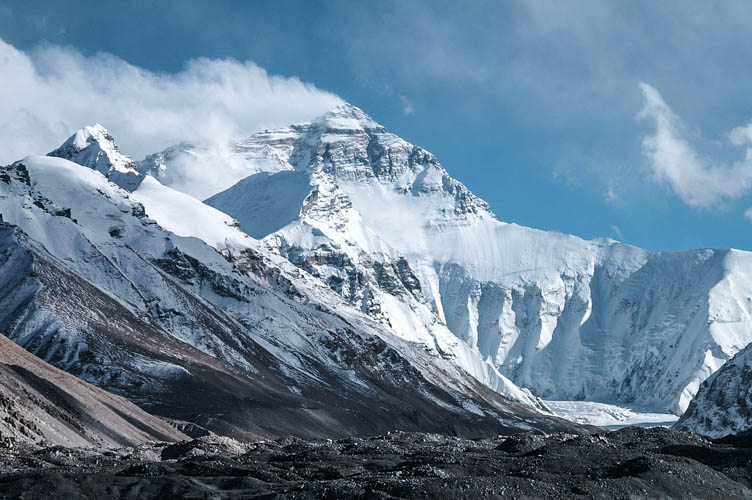 On the morning of 22 May 2003, Darren Swift received a radio call that would change his life forever… He was situated at an altitude of 7,800m on the North Ridge of Mount Everest when he learned of two injured climbers who were in need of help. Along with several team mates, Darren set out on a rescue mission to bring those two climbers down from Everest. This is his story.

At 8,848m above sea level, Mount Everest is the highest mountain in the world and it is always necessary for teams to take time to acclimatize to the altitude. This can take a few weeks, and once acclimatized, it becomes clear which climbers will be able to proceed to summit. I was part of the Royal Navy Royal Marine expedition to climb the North Ridge of Everest in 2003.

I was part of the second summit team, with Royal Marines Bill Bilingsley and Frankie Frances. We left from Camp Three ‒ Advanced Base Camp (ABC) ‒ to move to Camp Four on 20 May. ABC is at 6,300m on the East Rongbuk Glacier and Camp Four is at 7,000m. The move took us between four and five hours, over the glacier and up the North Col, over steep snow and ice, crossing crevices and under seracs.

Camp Four (7,000m) is found between the North ridge of Everest and Changtse (North Peak) and boasts fantastic views to the North Face of Everest. It can be a very hostile place to camp with big drops down both sides of the col and it can be very windy, with winds in excess of 100mph which can and sometimes do destroy tents. 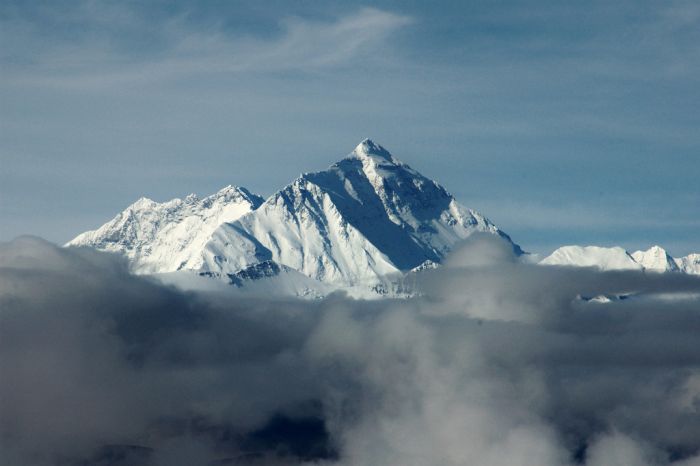 On 21 May we started the long climb up the North Ridge to Camp Five which is traditionally situated at 7,600m. Our climb coincided with the 50th anniversary of the first successful ascent to the summit and Everest was a very busy place, so we had to push up the mountain a little longer, to 7,800m.

Here we camped in little two man tents, precariously perched on the narrow North Ridge of Everest, Frankie and I in one and Bill and Narwang (our Sherpa) in the other. Out of the front of our tent, we had beautiful view across the North Face and 2,000m down onto the Rongbuk Glacier. The view from the rear of the tent was back down the East Rongbuk Glacier, where the tents of ABC looked very small. Even the tents back at Camp Five were looking tiny.

We chose to sleep at this altitude, using oxygen to give us the best chance of a good night’s sleep (everything up there was a challenge – eating, making drinks and even breathing).  In the morning, we were looking forward to the day’s climb to Camp Six, the location that you prepare for summit day! You don’t really sleep at Camp Six, you just rest, drinking and eating as much as you can in preparation, but at this altitude you often don’t feel like doing anything.

Then, on the morning of 22 May I received a radio call that would change my life forever. Frankie and I had just finished breakfast and were struggling to drink enough fluids when the radio crackled into life.

Nick: “Hello Camp Five this is Camp Four, over.”
Darren: “Hello Nick [Col Nick Arding, Expedition Leader], how are you?”
N: “I’m great, how are you guys?”
D: “We’re great Nick, we’ve had a great night’s sleep and we’re feeling strong and raring to go!”
N: “Great news guys because I need to ask you something.”
D: “What’s that Nick?”
N: “There are two climbers from another team who are injured and stranded just above your camp… Do you think you guys could find them and see if we can be of assistance? I know it’s your summit bid, so I can understand if you say no!”

Frankie, Bill and I quickly decided we needed to help out. 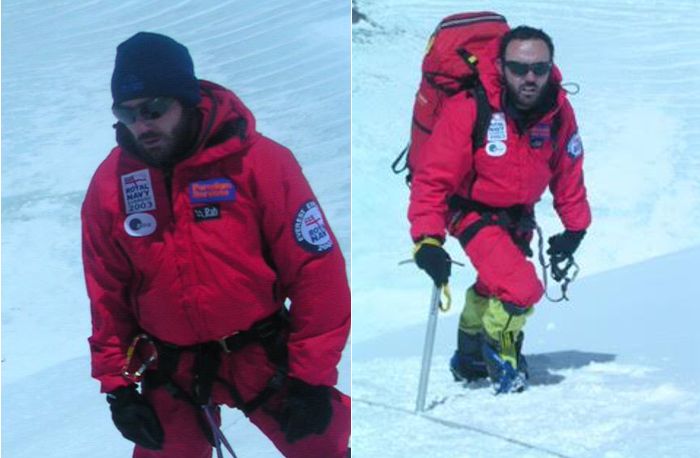 We poked our heads out of the tent to have a ‘face to face’ chat with Bill. It was during this chat that we came up with a plan. Bill suggested it wouldn’t require the full team to find the injured climber, so he would go and Frankie quickly volunteered to join him. I said that I would get busy melting snow for drinks and food, as they would need those as soon as they arrived. Not long after they left our tents the radio sounded

Moments later Bill arrived with the injured climber and he was in a bit of a state. We sat him down and Bill said that he had to go back, as the second climber they had found had a broken leg. I told Bill that I would look after the first climber, leaving them free to look after the second. I got straight on the radio to let Nick know the plan.

D: “Hello Nick, this is Swifty, over.”
N: “Hi Swifty, this is Nick – what’s going on?”
D: “Nick we have one who is snow blind, frost-bitten and fatigued and we have one with a broken leg!”
N: “OK I will send guys up to help.”
D: “OK Nick, I’m going to come down with the first guy and the others can help Bill and Frankie out!”

Once I was ready to go and the first climber had taken meds for his snow blindness and some pain killers to relieve the pain of his frost bite, we left Camp Five for Camp Four. As we started out we had to cross some difficult terrain where I had to steady him by placing his hands on my shoulders, as his frost bite meant he suffered with limited mobility. I also had to place his feet on the foot holds, as he couldn’t see where to place them due to his snow blindness. 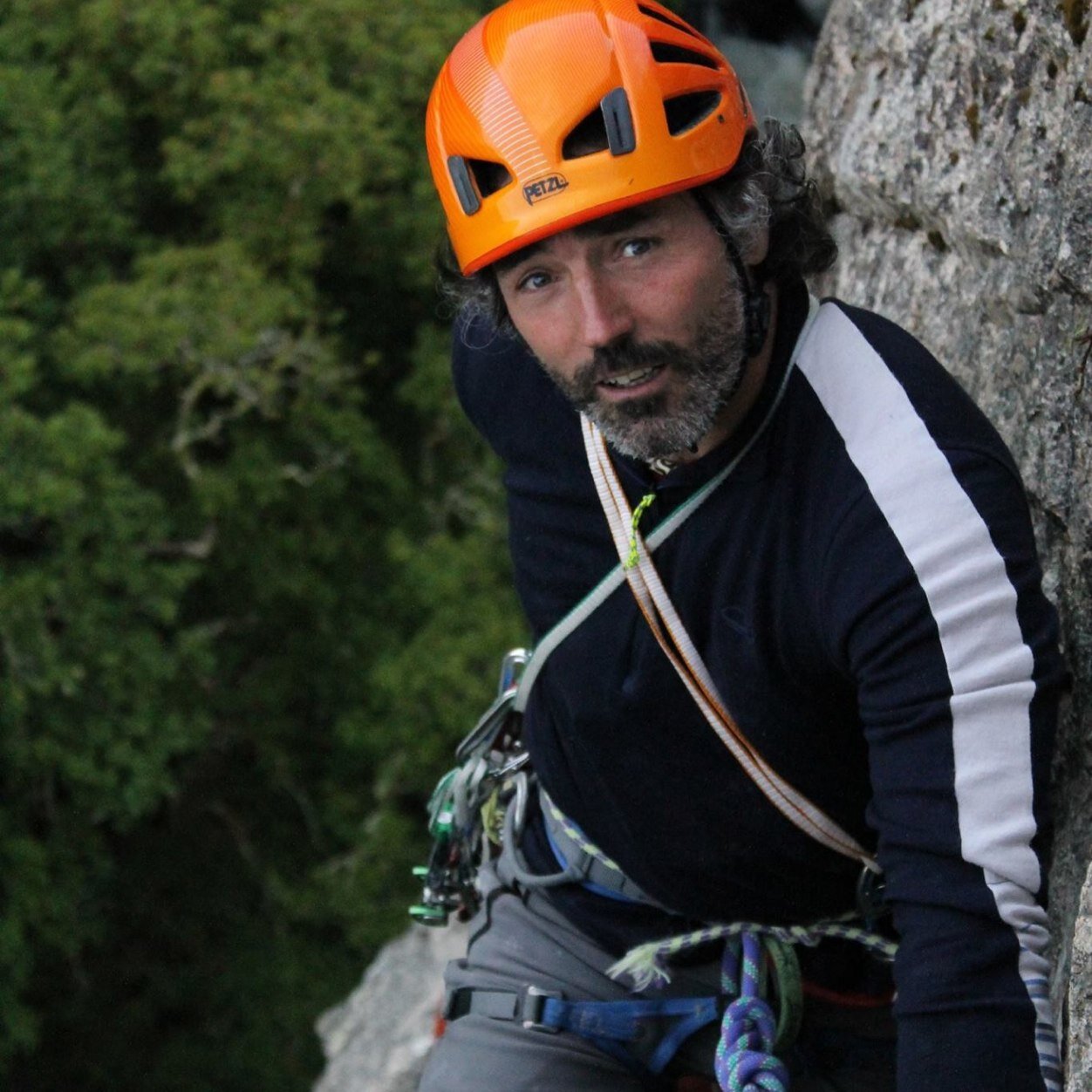 Darren (the author) out climbing

After passing over the rocky steps, we were again on the snowy ridge, where we stopped for a hot drink from my flask and a bite to eat. I had to help him hold his cup and open his Snickers bar due to the frost bite. Two American climbers passed us, asking us what had happened.

I explained that he was an injured climber and that I was taking him down. They said that they were planning to be the first American father and son team to summit and I wished them well ‒ they smiled and left. At this altitude, it’s hard enough to look after yourself, let alone someone else.

Once on our feet again, we slowly walked down the North Ridge. I clipped myself to the fixed lines and the injured climber was clipped directly to me via two short leashes, so that I could control his rate of descent and steer him in the right direction. The weather started to deteriorate, the mist came in and the temperature dropped to around -35 degrees.

After a few hours, we came to the start of the North Col where it narrows due to a cornice (a wind-blown wave of snow). The wind blew the fixed line over the edge of the cornice so I instructed the injured climber to hold me as I guided him around the danger to the safety of Camp Four.

As we were walking over the sharp edge, he grabbed me tightly and we stumbled, staring down a 2,000m drop, directly to the glacier below the North Face. I quickly fell to my knees and drove my ice axe into the snow, to stop us falling down to the glacier below. Taking a second to catch our breath, relieved that we weren’t falling, we got up and walked into Camp Four, which received us with a warm welcome.

At Camp Four, Nick, Pat and a few other team members gave us food and cups of tea. Nick said that he had grabbed a couple of guys from the team who would help me the rest of the way to ABC where Andy (the doctor) was waiting. I said that I would carry on by myself, as everybody would be needed to help Bill and Frankie with the second climber, who had a broken leg. After a short stay at Camp Four, we departed for ABC. 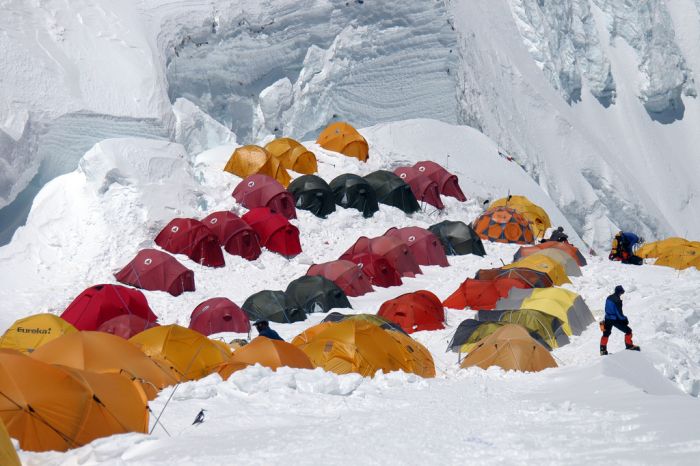 Heading to ABC required a descent of the North Col where we would have to cross crevasses, climb under seracs and abseil down some steep ground. I had to stop to plan how I would do this, as it was much steeper than the North Ridge with some seriously difficult ground. I thought the easiest method would be to abseil most of it, so I clipped the injured climber to myself and abseiled most of the steep ground. The abseiling was hard work, trying to keep up both on the line of descent I wanted, rather than the fall line which sometimes wanted to take us down into crevasses. I had to put his arms over my shoulders to keep us on the correct line.

On the descent, we came across a vertical wall of ice which hadn’t caused much of a problem on the way up, but on inspection of the fixed lines I decided to lower him down the line and I abseiled down separately. Once down off the North Col, we walked down across the glacier to ABC where we were greeted by Rich (the Base Camp manager). We said our goodbyes and I went to our cook tent for some tea. The injured climber hugged me with the promise of a beer one day before being taken to the medical team. After a great night’s sleep, I was woken by Rich, “Swifty, are you awake?” “Yes mate, why, what’s up?” “There’s a radio call for you!”

N: “Hello Swifty, this is Nick, over.”
D: “Hello Nick, how’s it going up there?”
N: “We’ve all been working through the night to get the guy with the broken leg down, we met Frankie and Bill and relieved them of the casualty and they went back up to Camp Five.”
D: “Sounds like an epic?”
N: “Yes we’ve only had a couple of hours sleep!”
D: “Can I help Nick?”
N: “Yes, if you could pop back up to give us a hand that would be fabulous!”
D: “OK Nick, I’m on my way.”

After a few cups of tea and bowls of porridge I was off, back up the North Col. I met Nick, Pat and the team starting to descend. They had the casualty in a lightweight stretcher and were dragging him over the snow. When I met them, they all looked shattered and I didn’t look much better. We dragged the casualty as much as we could and had to carry him for a large part of it. 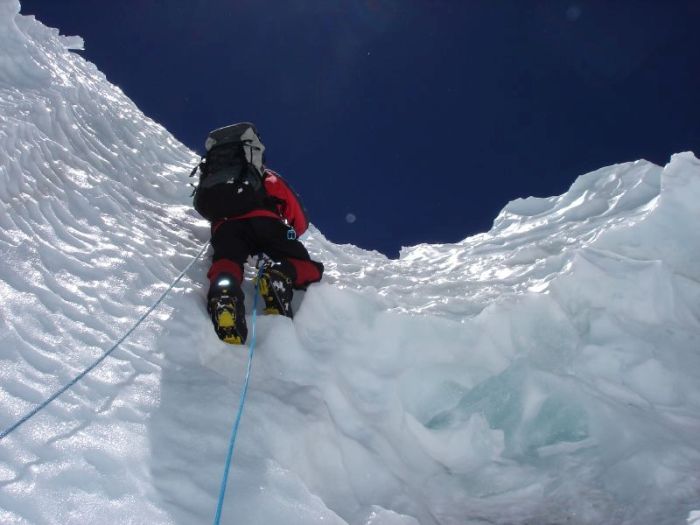 When it came to the steeper sections where I had abseiled just the day before, we had to lower him and have people positioned to stop him falling into any crevasses and to drag him back on to the track which seemed to take forever.

Upon reaching the glacier below, we all knew it was nearly over. A few climbers who had heard about what was going on came out with tea and biscuits and offered help. “A bit bloody late”, I muttered under my breath. We finally got him to our tent at ABC where Andy had a look at his leg and coordinated with Rich for some porters to carry him the last few miles to Base Camp.

Once everyone was back and safe at base camp, we made the journey back to Nepal and Kathmandu and onto home. Even though my boyhood dream of summiting Everest was still a dream, the value of those guys lives was worth more than the summit.

The road to Everest: The introduction
The Armchair Adventure Festival brings travel to your living room
Leo Houlding summits the world's most remote mountain
Type to search or hit ESC to close