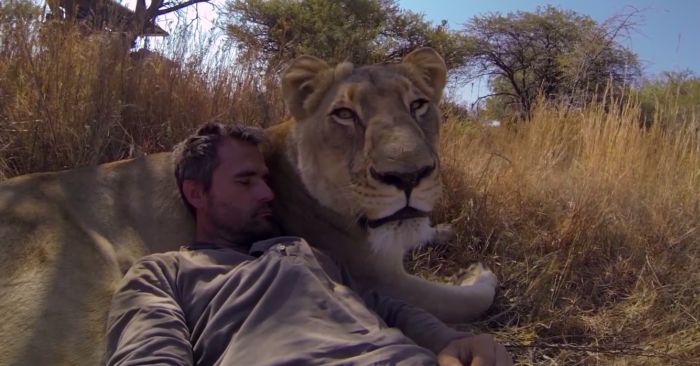 Watch: Video shows the incredible relationship between man and lion

I’m not entirely sure what I make of this video. On the one hand it’s an incredible, well shot film with a message that hits home, but on the other hand, it’s a guy hugging lions in the wild and everything I’ve been told about lions makes me think that this can only end badly.

If we forget, for a moment, the fact that what Kevin Richardson (the guy in the film) is going is completely against everything we’ve been told, then Go Pro: Lions – The New Endagered Species? is brilliant, compelling and gripping footage of a unique relationship between a man and a pride of lions and a clan of Hyenas, and it’s incredible to watch.

As the title of the film suggests, it’s filmed entirely with GoPro cameras, which are capable of producing some really quality images, and the positioning of these allow us to watch Kevin’s interactions with the lions in a first person view. We see him playfully wrestling with them, lounging around with them and even tickling them.

While the film amazes us by showing Kevin’s relationships with the animals it also sends home a pretty strong message towards the end: lions are becoming endangered and, if his predictions are correct, then there may not be any more lions on the plains of Africa in 20 years time.

As I eluded to at the start of this piece, what Richard does seems incredibly dangerous considering all we know, or at least think we know, about lions. However, given the fact that Richard has been working with these lions for 13 years I think it’s safe to say that he knows what they’re capable of and what risk he’s putting himself at.

Indeed one of the scenes in the film shows one of the male lions jumping at the support Jeep and ripping the wing mirror off with an effortless tug. The crew get spooked and speed off leaving Richard outside with the lions. As they take off in pursuit of the run away car, Richard stands there casually, looking so natural in his environment that you just get the feeling that he’s so at ease with these lions, and they’re so at ease with him, that they wouldn’t ever attack him, even when they’re chasing a car full of humans.

It all sounds a bit familiar though. It was 11 years ago that we learned of the death of Timothy Treadwell, the American man who spent 13 summers living with grizzly bears in Alaska. Ultimately, despite Timmy’s love for them, him and his girlfriend were mauled to death by a bear doing what bears do. Will Richard’s story end the same way? Who knows. I really hope it doesn’t and I really hope that he can keep on raising awareness of the decreasing number of lions in the wild.

Anyway, I’ve blabbed on for a long while now, here’s the video, take a look and let us know what you think in the comment section below!