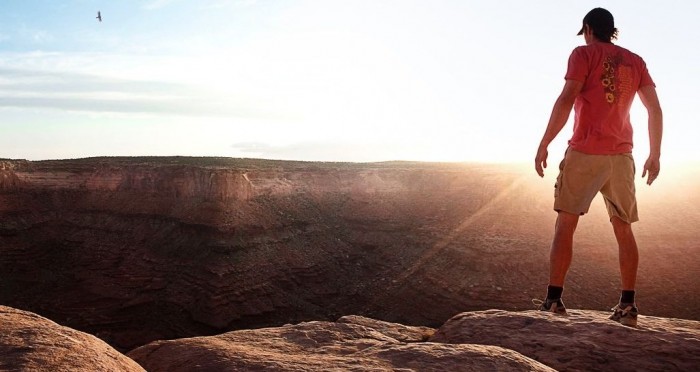 10 films that will inspire your next adventure

For many of us, scaling the world’s toughest mountains or giving up our job for a crazy adventure is just a dream that constantly sits at the back of our mind. But here at Adventure Travel we want to see those dreams start coming true, so we’ve compiled a list of 10 films that will inspire you to your next adventure.

With some of the best landscape cinematography you will ever see, Into The Wild tells the (true) story of Christopher McCandless, an exemplary university graduate who donates his entire savings account to charity before hitting the road in search of real living. Over the course of the film, he hitchhikes across America meeting a variety of people who have a profound effect on his life. Christopher’s aim? To reach and live in the wilds of Alaska.

In a line: An extremely evocative film with truly stunning cinematography and an outstanding soundtrack.

Set in the Peruvian Andes in 1985, Touching the Void is based on the book of the same name and tells the story of Joe Simpson and Simon Yates’ ill-fated attempt to climb Siula Grande (6,344m). After reaching the previously unclimbed west face, Joe brakes his leg and the duo are left with the challenging task of getting off the mountain alive while a severe storm is raging. The story has many dramatic twists and turns and shows just how fierce mountains can be.

In a line: A tale of extraordinary survival with unending drama in spectacular, but inhospitable mountains.

The Motorcycle Diaries is the dramatization of Ernesto ‘Che’ Guevaro’s life-changing motorcycle trip across South America. The journey sees Che and his friend, Alberto Granado, travel from Brazil to Peru on motorbike learning of the great injustices of Latin American life along the way. The film depicts the profound impact on Che, who later became internationally known as the iconic Marxist guerrilla commander and revolutionary. Alongside all of that, the film reveals the beauty of South America and the joys of travel in one of its purest forms.

In a line: Worth a watch for the visuals alone, The Motorcycle Diaries is both interesting and inspiring and gives a fascinating insight to the foundations of Che Guevaro.

Starring Reece Witherspoon, Wild tells the tale of one woman’s 1,100-mile solo hike along the Pacific Crest Trail (one of America’s longest and toughest) after the loss of her mother and the breakdown of her marriage. Full of emotion and vast open scenery, Wild is one of those films that you will struggle to take your eyes off for fear of missing the next amazing shot.

In a line: A great performance and some breath-taking scenery make this a must.

Directed by Danny Boyle and starring James Franco, 127 Hours is not for the faint hearted. It depicts the story of Aron Ralston, a mountaineer and adventurer who gets trapped in a remote canyon in Utah after a boulder falls on his arm. In the days that follow Aron contemplates life and the options open to him before deciding to amputate his arm in an effort to escape certain death.

In a line: Expertly directed, beautifully filmed and a great soundtrack.

Visually, Life of Pi is one of the most stunning films to hit screens in recent years. It tells the story of a young man who survives a shipwreck at sea and finds himself in an epic fight for survival. While on this journey of adventure and discovery, he is forced to forge a relationship with one of the other survivors of the accident, a Bengal tiger.

In a line: Simple in its plot, Life of Pi should be watched solely for the vast and exotic scenery that it filmed in.

The Secret Life of Walter Mitty

Ben Stiller stars as Walter Mitty, an employee of Life magazine in this who spends his days developing photos for the publication. In contrast to his life of monotony, Walter escapes in a world of daydreams where he is the hero in exciting scenarios. Eventually he actually gets a chance to have a real adventure when the magazine’s owners send him on a quest to get the perfect images for the final print issue.

In a line: It’s funny, visits extreme and beautiful locations and ultimately forces us to ask the important questions about life.

It may seem strange to feature an animation in this list, but Up really does make you want to go exploring. The film tells the story of 78-year-old Carl Fredricksen who decides to travel to Paradise Falls after his wife passes away. The twist however, is that he will be travelling in his home equipped with helium balloons and unbeknown to him, a young boy scout has snuck into his house. The film then follows the pair’s adventures in the exotic landscape of South America.

In a line: It’s emotional, it’s funny, but most importantly it provokes a feeling of adventure and exploration.

Emotional and inspiring at the same time, The Way tells the tale of a father who heads overseas to retrieve the body of his son who died while taking on the Camino de Santiago, a Catholic pilgrimage route to the Cathedral of Santiago de Compostela in Galicia, Spain. The father, played by Martin Sheen, then decides to walk the trail himself in homage to his son while spreading the ashes along the way. His journey leads him through stunning scenery while encountering a range of characters along the way.

In a line: Heart-warming, funny and set among some of Europe’s finest scenery.

I know, I know, this one’s a bit predictable, but it would be criminal if we didn’t include this one on the list. The Beach is one of the classics and it follows a guy named Richard (a young Leonardo DiCaprio) as he follows a strange map that is said to lead to a secret beach paradise. Upon finding it, Richard discovers a hedonistic community of backpackers and joins them in their ways. Not all goes to plan though…

In a line: Set among the idyllic Thai islands, The Beach offers drama and stunning scenery in equal measure.

Interview: Alastair Humphreys reveals his best and most gruelling microadventures to date
The best Instagram feed for travel inspiration this week
These 10 photos will make you want visit the Bolivian salt flats
Type to search or hit ESC to close