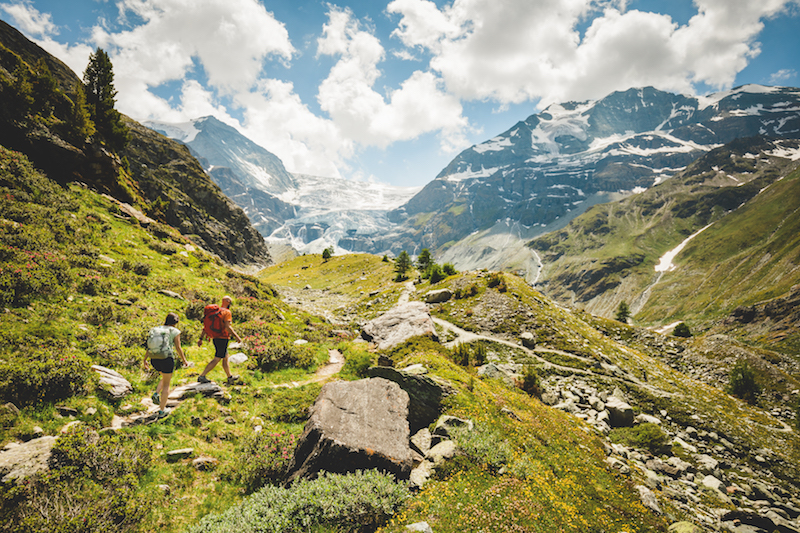 The Alpine Passes Trail is a wild, challenging and beautiful long distance hike through Switzerland. Kev Reynolds has the details…

What is the Alpine Passes Trail?

The Alpine Passes Trail (APT) is an epic multi-day trek that explores some of Switzerland’s most famous mountain districts. While Via Alpina 1 makes an east to west traverse along the northern edge of the Swiss Alps, the Alpine Passes Trail tackles their south side. Established in 2008, it sets out from Chur in the canton of Graubünden, edges the Lepontine Alps of Ticino, then cuts right across the breathtaking Pennine Alps of Valais, before skirting the big block of the Dents du Midi and ending at St Gingolph on Lake Geneva.

What a trek this is! The statistics are as impressive as the scenery, with no less than 34 day-stages needed to cross 32 passes, many of which provide stunning views of the greatest collection of 4,000m summits in Western Europe.

Why should I do it?

Well, there has to be a good reason to justify devoting more than a month to one long walk, but in the case of the APT there’s a multitude of reasons. For a start, there’s the sheer variety of landscape, language, culture and architectural styles revealed on the hike, let alone the almost daily thrill of mounting a pass (be it a grassy saddle or a narrow cleft in a rocky ridge) to discover a whole new world unravelling before you. There are remote grasslands and high plateaux speckled with lakes, valleys lush with flowers and loud with the cry of marmots. There are stony deserts, wild and haunting when the mist comes down; there are lung-bursting paths that appear to aim for the sky, and some of the world’s most exciting belvedere trails that teeter above deep-cut valleys. Yet no mountaineering skills are called for, just a good head for heights, bags of energy, and time.

What about these mountains, then? Well, for the first 10 or 11 days, most of the country is little-known to walkers from outside Switzerland. Full of surprises, the peaks are of comparatively modest height and largely devoid of glaciers, yet passing out of the charming Binntal, the first 4,000m summits make themselves known with the distant Lagginhorn and Weissmies that wall the wonderful Saas Valley. Before reaching these, however, you wander below handsome Monte Leone and cross the Simplon to reach the scattered hamlet of Gspon at the mouth of the Saastal.

From Gspon the APT takes a high-level path to Saas Grund, then it’s up to Saas Fee beneath the soaring Mischabel peaks to tackle the Balfrin panorama trail leading to Grächen in the Mattertal – two days of walking you’ll never forget! Next comes an easy descent to St Niklaus, followed by a long uphill slog through the delightful alp of Jungen, then up and up, and up some more to cross the lofty Augstbordpass, with a swift descent to Gruben in the Turtmanntal. This seemingly forgotten valley is headed by the Weisshorn, but when you’ve crossed the next pass on the itinerary, you join another of those balcony trails of such beauty that it’ll haunt your dreams for years. Almost every step of the way to Zinal gives a view of the Matterhorn, Obergabelhorn and Dent Blanche, the line of big peaks expanding as you draw near.

The two-day hike from Zinal to Arolla provides beautiful close-up views of more big peaks, and when crossing either Col de Riedmatten or Pas de Chèvres to the next valley, it’s Pigne d’Arolla and Mont Blanc de Cheilon that dominate. After a night spent in a barren mountain basin, the APT tackles its highest pass, the 2,965m Col de Prafleuri, which is one of the most challenging stages – a two-pass day leading to Mauvoisin in the deep Val de Bagnes below the Combin Massif.

For six days the APT reversed the classic Chamonix to Zermatt Walker’s Haute Route all the way from St Niklaus in the Mattertal, but now it takes a different course over the grassy Col de Mille and historic Grand St Bernard Pass, before dropping into the Val Ferret with its alpine meadows and unspoilt villages. At La Fouly it joins the Tour du Mont Blanc to Champex and Trient, then breaks away to skirt the Dents du Midi on the final leg to the border town of St Gingolph on the shores of Lake Geneva.

This is Switzerland, right? If it’s impossible to devote 34 days (and more) to such a long walk, there are lots of opportunities to divide the APT into suitable chunks with natural cut-off points served by public transport. Few long treks are as adaptable as this.

Where to stay? For much of the way the route travels from hut to hut, but where no mountain huts exist, a stage will end in a village, a romantic old inn, or a historic hospice. Should you wish to backpack, camping is also possible. Depending on conditions, the APT will normally be open for business from late-June until late September. So go for it!

For more information on the Alpine Passes Trail, click here.

Ash Dykes reveals all about his solo walk across Mongolia
Best hikes in the world: The Pennine Way
Everything you need to know about trekking in Nepal
Type to search or hit ESC to close