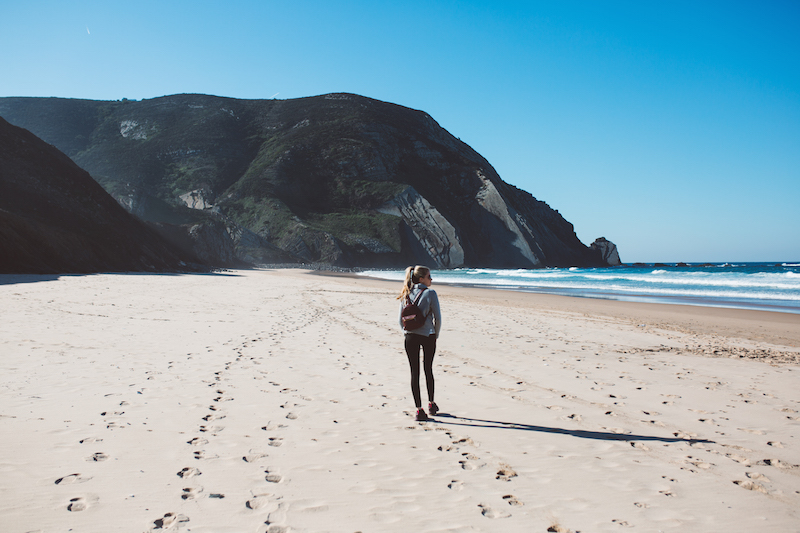 Portugal: These hidden adventures in the Algarve make the perfect winter escape

The Algarve probably isn’t the first place that springs to mind when you think of adventure. For me, it’s synonymous with golf, British tourism and retirement.

While that might seem to make it an odd place to go in search of adventure, the Algarve also brings cheap flights, accommodation and infrastructure. When this is combined with warm 20C-plus temperatures, it makes it a perfect adventurous winter break for those who can’t make it to the Southern Hemisphere.

The Algarve doesn’t hold any official long distance hiking trails, so doesn’t rank high on many walkers ‘must-do’ places in Europe, but it does have mile after mile of beautiful coastal footpaths and small, intimate villages nestled in the mountains. There is also a Cicerone guide available for hiking in the Algarve, the hallmark of any destination worthy of a visit. From the rocky bays of Lagos, to the gentle rolling cliffs of the Vicentine Coast, to the 902m peak of Mount Fóia, the Algarve has something to offer for anyone wanting to get out and explore. 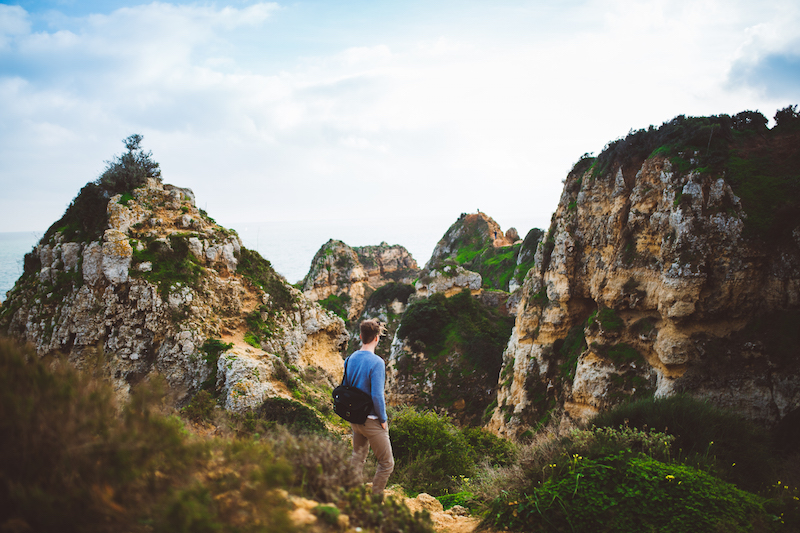 Cheap flights necessitate unsociable hours, meaning our first experience of Alvor was one of complete darkness. In the morning we awoke to see a long, smooth beach punctuated with dappled rocks scattered in the distance. After walking through the small fishing harbour with packs of dogs roaming freely, we strolled down a long boardwalk in the morning sun.

By the time we reached the rocky outcrop, the tide was on its way out, allowing us to venture deeper along the coast as more of the beach became exposed. We hopped over ledges and jumped down holes moving along the beach, only pausing to allow the tide out some more where we hit an impassable cliff.

Every corner contained a new cave or passage. When walking through these caves, holes periodically appeared in the roofs, cascading strong beams of light into them. The sharp light gave the grandeur of a dark cathedral; a damp cold atmosphere in total contrast to the pleasantly warm sun outside. 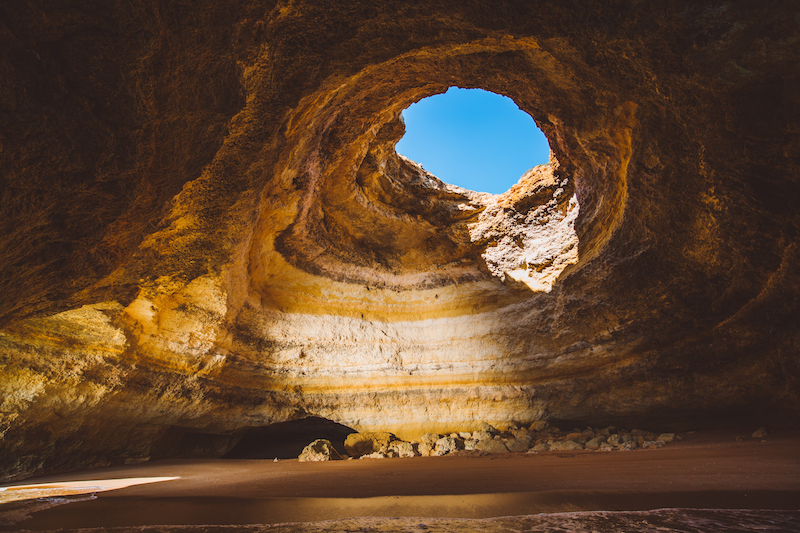 The biggest and most famous of these caves is 25 miles to the east of Alvor at Benagil. The Benagil Cave is only accessible by water; either a 140m swim from Benagil beach or a relatively inexpensive boat ride. As the waves crash against the beach inside the cave, it echoes around the huge cavern. With no other noise around, the repetitive splashing adds an odd tranquillity to the place. If you happen to be here on a winter escape you’re likely to be blessed with solitude, making this Algarve icon well worth a visit.

A boat tour will also show you the surrounding coast. While Benagil is the landmark of the area, other inaccessible private beaches are littered along this part of the coast. Secret tunnels and caves are carved into the coastline where smugglers used to receive contraband away from the prying eyes of the nearby lighthouses and ports.

Much of the rest of Portugal’s southern Algarve coast from the Ponta de Lagos to Luz is very much the same, offering a unique set of caves formed from similar rock, all equally as grand. By heading west to the village of Sagres you leave the familiar rocky coast and enter the Parque Natural do Sudoeste Alentejano e Costa, home to the Vicentine Coast. 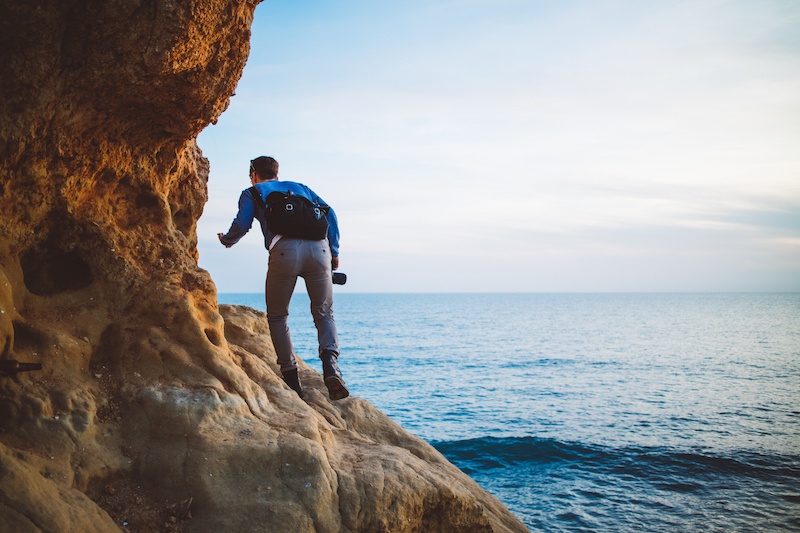 Here, the landscape is completely different with long, flat beaches and high, smooth black hills standing hundreds of feet above the coast. The hills range from sheer-faced cliffs to navigable steep banks covered in landslips from the unstable ground. For those that like a well waymarked trail, this is certainly not the place for you. To even try and follow in our footsteps would be a task in itself. Our strategy for the entire trip was composed of little more than parking up somewhere, pointing at the biggest hill and walking up it.

Perhaps we missed the ‘must-see’ parts of the Algarve, but the lack of research and spontaneity ended up rewarding us with some incredible views and most importantly, a sense that we were exploring. By going in January we were almost on our own for the entire time, only interrupted by the occasional dog walker on the beach or local in the towns. However, I imagine most of this solitude is lost during the summer months.

The Algarve might be most easily identified by its distinctive coastline, but 20 miles inland lays the mountain village of Monchique. The village was originally known for its wool and linen production, but today offers a place for tourists and holidaymakers to wander through its quiet, narrow, whitewashed streets on the side of Mount Fóia. 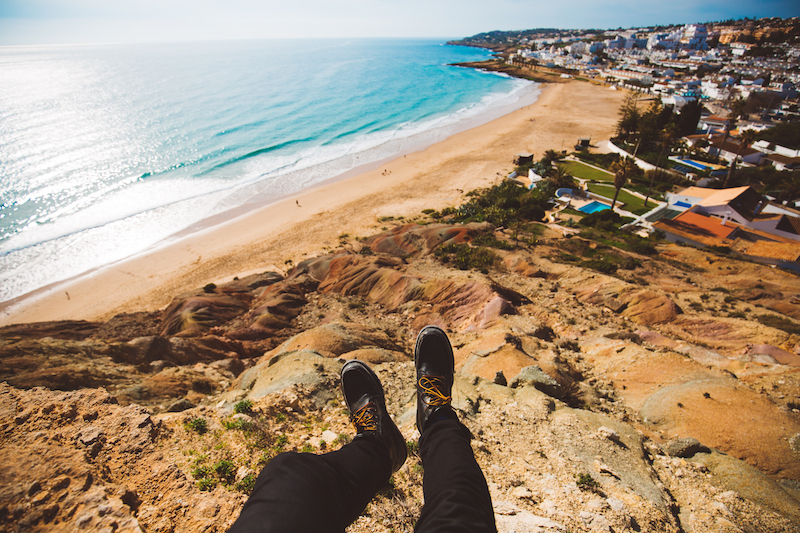 There is a narrow twisty road that extends all the way up to the peak of Fóia. The Algarve isn’t a mountainous region, which gives Fóia a large prominence over the surrounding area. The entirety of the coast can be seen to the south, with mile upon mile of rolling foothills to the north.

We initially headed to the Algarve after seeing the cheap flights and a warm weather forecast with no idea what we’d find. Despite its reputation for soulless British tourism, the Algarve is a long way from its Spanish cousin Benidorm.

If you’re looking for a cheap way to explore somewhere new after months of dark, depressing winter weather, the Algarve should be high on your list.

How to get to the Algarve

Flights to Faro start at £15 from UK airports. Car hire in Portugal is cheap and bus services are perfectly adequate with regular journeys. Though, if you head out in off-season, buses are more infrequent so it’s well worth checking timetables.

Where to stay in the Algarve

Accommodation is cheap and readily available outside of peak season, with advance booking often not necessary.

When to go to the Algarve

The area stays relatively mild year-round, but you’ll probably want to avoid November through to February to avoid the wettest months. Go in the shoulder seasons and you’ll dodge the crowds and still be blessed with decent weather.

What to do in the Algarve

Many tourist attractions and tours won’t be running over the winter, but with hundreds of miles of coastline and free entry into the national parks we found ourselves spoilt for choice of things to do.