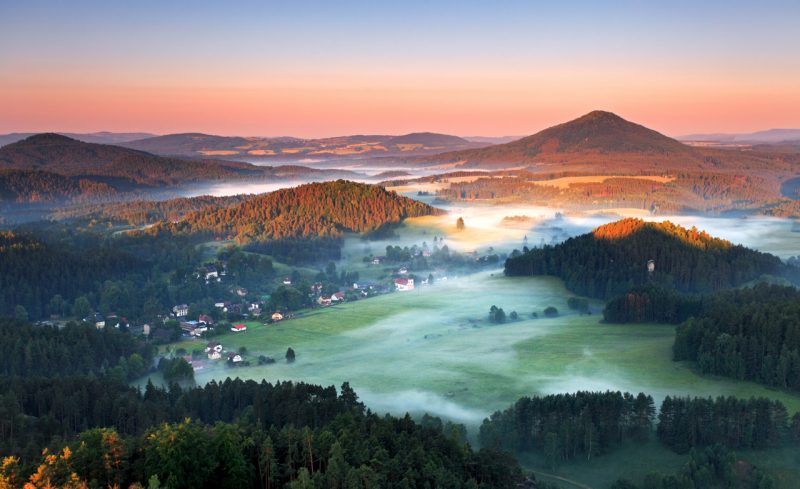 When you think of hiking in Europe, your mind often wanders to that of the snow-kissed peaks of the Italian Dolomites, the sparkling waters of the Norwegian fjords, and the lusciously green hills of Switzerland. However, if you turn your attention to the the Czech Republic, you’ll be blown away by the staggering natural beauty that this central European gem has to offer.

So, to prove that the country should be on your adventure travel radar, we’ve teamed up with The Natural Adventure Company that offer spectacular self guided walking holidays in the country, to take a look at five stunning hiking destinations in the Czech Republic. 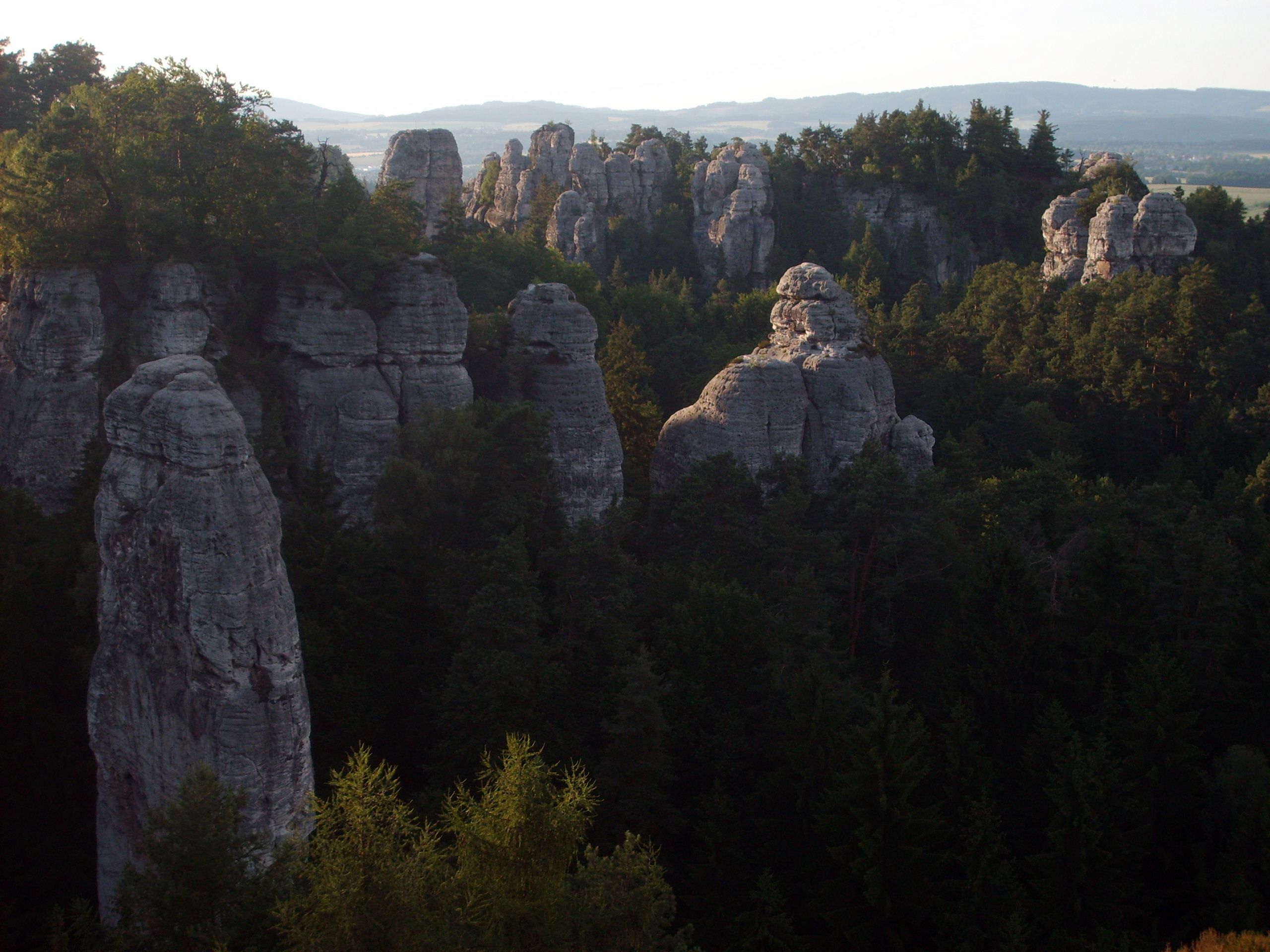 Situated just over 50 miles from the capital city of Prague, Bohemian Paradise is well, exactly what its name suggests – a paradise! Just walking through its narrow rock corridors, formed by great natural sandstone phenomena, feels like you’re wandering through the lands of a distant world. Not only this, but the national park is just brimming with other stunning sights such as castles, ancient ruins and waterfalls.

The park has many hidden caves waiting to be discovered at ground level, but when you climb above the tree-tops to one of the park’s spectacular view points, via one of the many carved staircases, is where this park really comes alive. The view is even better if you catch it at sunrise or sunset.

The Jizera Mountains, otherwise known as the Izera Mountains, is the northern most range of the Czech Republic and is situated on the border of Poland. There are many hiking trails throughout the area, and in summer, hikers can enjoy access to an extensive network of trails, all offering stunning greenery and views, fast flowing rivers, and sparkling reservoirs. In the winter, the area transforms to that of a glittering white paradise, and although some of the trails are inaccessible, hikers can still enjoy a vast range of them during this season.

The Jizera Mountains are also a fantastic place to go skiing in the winter, with slopes covering all grades of difficulty, from easier, family friendly options to thrilling cross-country. For those who love mountainous hiking, the highest peak in the range is Wysoka Kopa, which measures a mighty 1,127m. Other peaks in the range include Smrk (1,124m), Jizera (1,122m), Stóg Izerski (1,107m), and Smědavská Hora (1,084m). 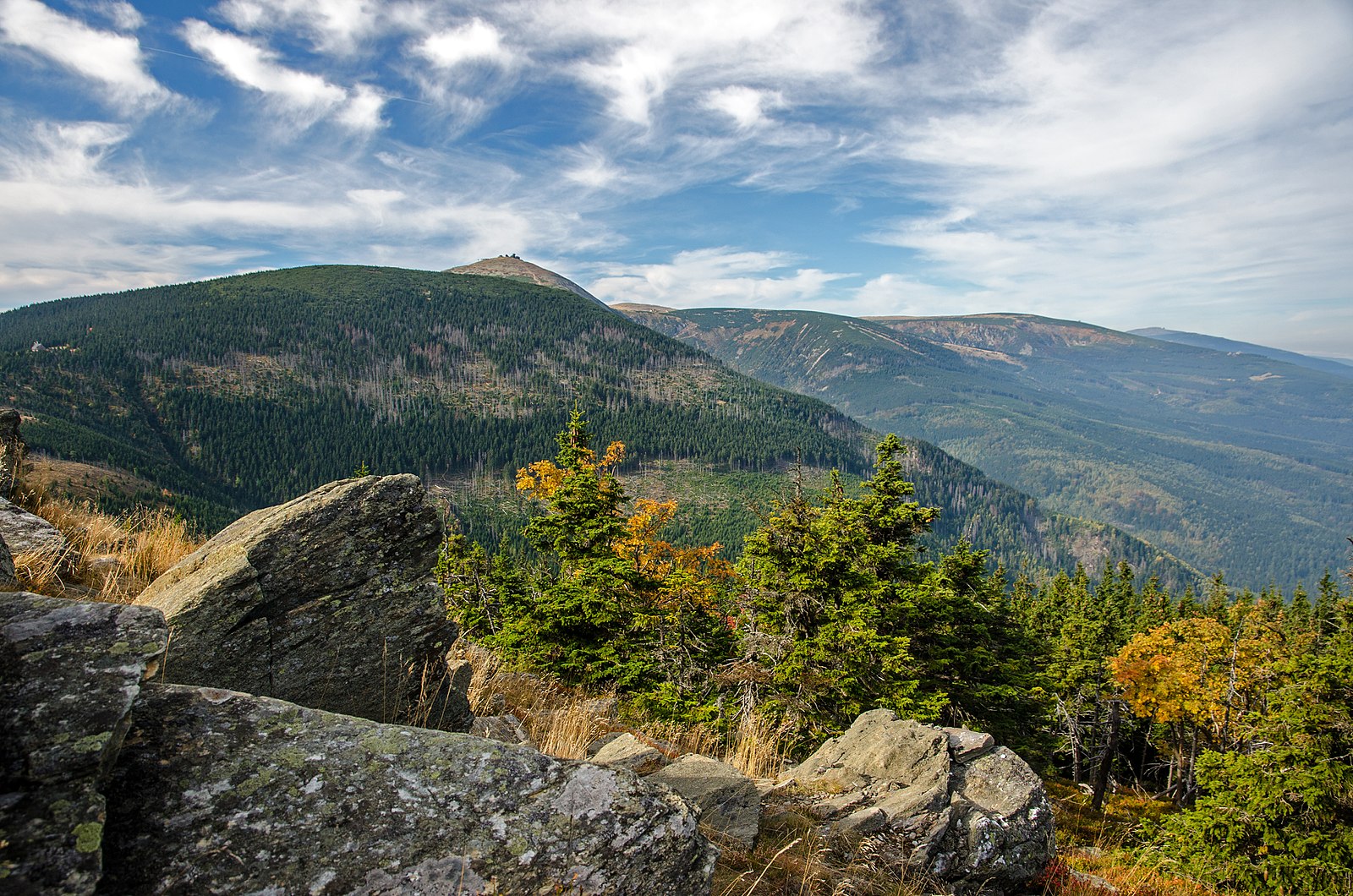 Not only is Krkonoše National Park one of the most beautiful areas in the Czech Repbulic, but it’s also home to the country’s highest mountain range, the Krkonoše Mountains, and is listed as a UNESCO Biosphere Reserve site. The national park is a glamorous display of rolling hills, vibrant forests, deep valleys, and cascading waterfalls, such as the Pančava waterfall that spills and tumbles elegantly from a magnificent rock formation of giant, square-shaped boulders.

The hiking trails here are idyllic in summer and weave you in and out of fresh smelling meadows and fragrant forests which are brimming with colourful plant life. Some of the trails will see you climbing up to view points that will simply take your breath away. The diversity of animal life in the park is also fascinating, so keep your eyes peeled for bright butterflies and dragonflies, woodpeckers, storks and owls.

Jetřichovice is a village in the Děčín District of the Czech Republic. The village itself is quaint, with only around 403 inhabitants, but the picturesque landscape in which it calls home is simply out of this world. Great hills emboss the land and rise above the vibrant green fields and meadows. Vast pine forests sweep across the landscape, filled with many interested plants, flowers and fungi, along with an array of buzzing woodland creatures.

The area is just begging to be discovered, and is a delight to explore across the year. In winter, the fields are crisp with frost that glitters in the sunlight; in spring, a carpet of mist drapes itself over the landscape creating an enchanting scene. In summer, its blessed with luscious greenery and bright blue skies; and in autumn, the landscape is set on fire with an array of golden yellows, burnt oranges and deep reds as the forests turn and the leaves slowly descend to their sleep. 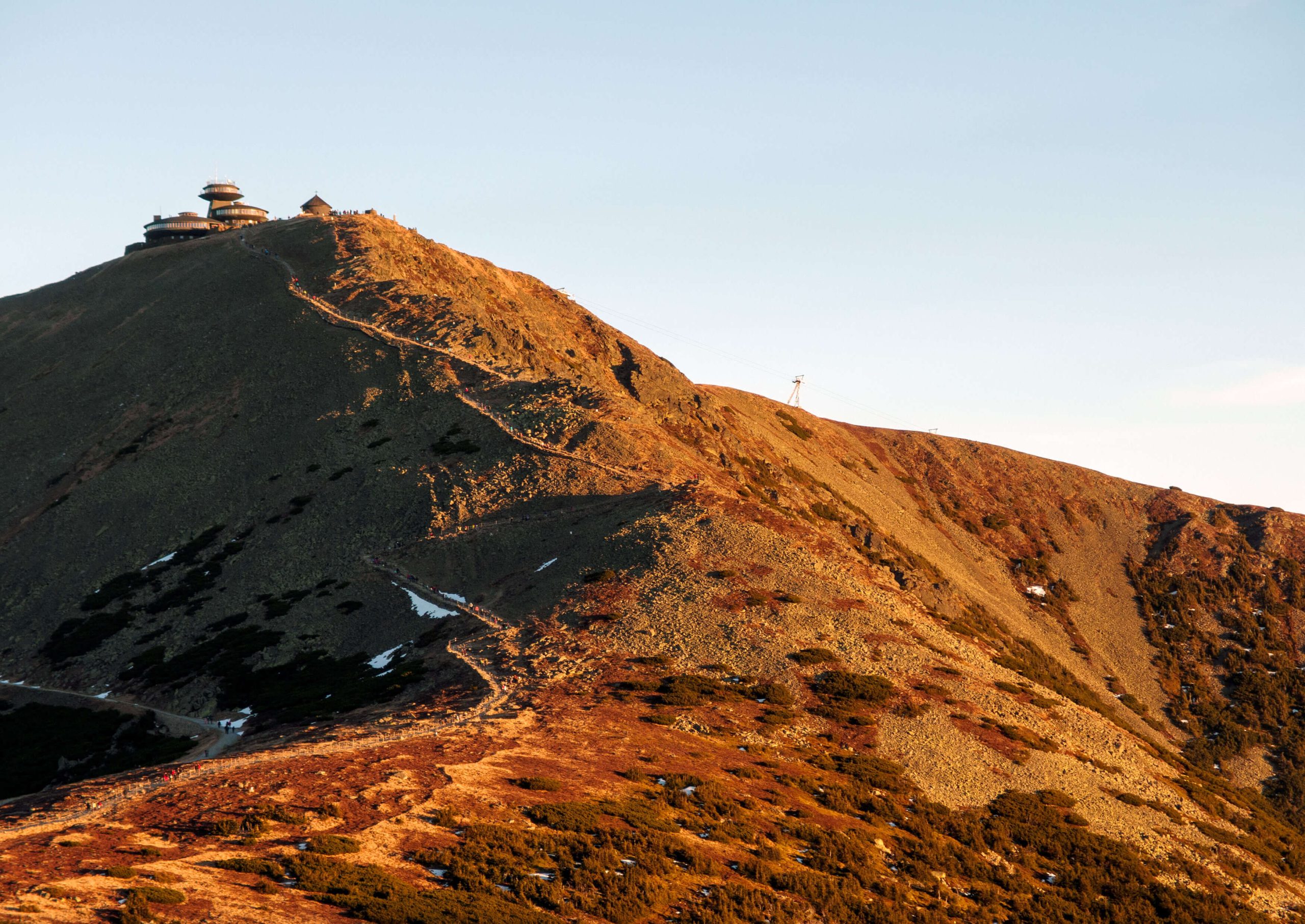 Taking a closer look the Krkonoše Mountains, soaring 1,603m above sea level, Mount Sněžka is not only the highest peak in the range, but the highest in the Czech Republic. Hikers who wish to summit Sněžka have the option to start the trail from the foot of the mountains or to ride a cable car to around 1,200m and hike from there.

There are strict regulations about keeping to the path at all times on this mountain, so it’s very much advised not to go wandering off the beaten track. The trail takes you through beautiful forests as you make your way higher up the mountain, and the final half mile is a series of over 300 granite steps which lead you to the summit. The view from the top is quite spectacular and is the perfect place to stop for lunch while you take in the 360-degree views.

Undoubtedly one of the most, if not, the most picturesque regions in the Czech Republic is Bohemian Switzerland National Park, otherwise known as Czech Switzerland. What makes this national park so beautiful is its rich, dense forests, unique geological rock formations, and dramatic gorges. Catching the views here within golden hour (the hour after sunrise or before sunset) transforms this national park into hazy wonderland of the up most staggering beauty.

Hiking in this magnificent area is nothing but a pleasure, with so much to see you could quite possibly spend an unlimited amount of time there and never tire of the sublime scenery. There have been staircases installed into many of the rock formations in the park, to allow hikers to climb to the top and experience the awe-inspiring panoramic views.

If you’d love to explore the vast beauty of the Czech Republic, then a self guided walking holiday with The Natural Adventure Company is a great way to make sure you don’t miss any of the best sights on your walking holiday. The company’s Czech Republic holidays include some of the most beautiful regions that the country has to offer, such as Bohemian Switzerland and Krkonoše National Park.

All of the company’s Czech Republic walking holiday itineraries finish in the spectacular city of Prague, so you’ll also have a day or so to soak in the wondrous architecture, history and culture of this magnificent city before you head home. Head over to The Natural Adventure Company‘s website to see their Czech Republic itineraries or to browse their full range of walking holiday destinations. 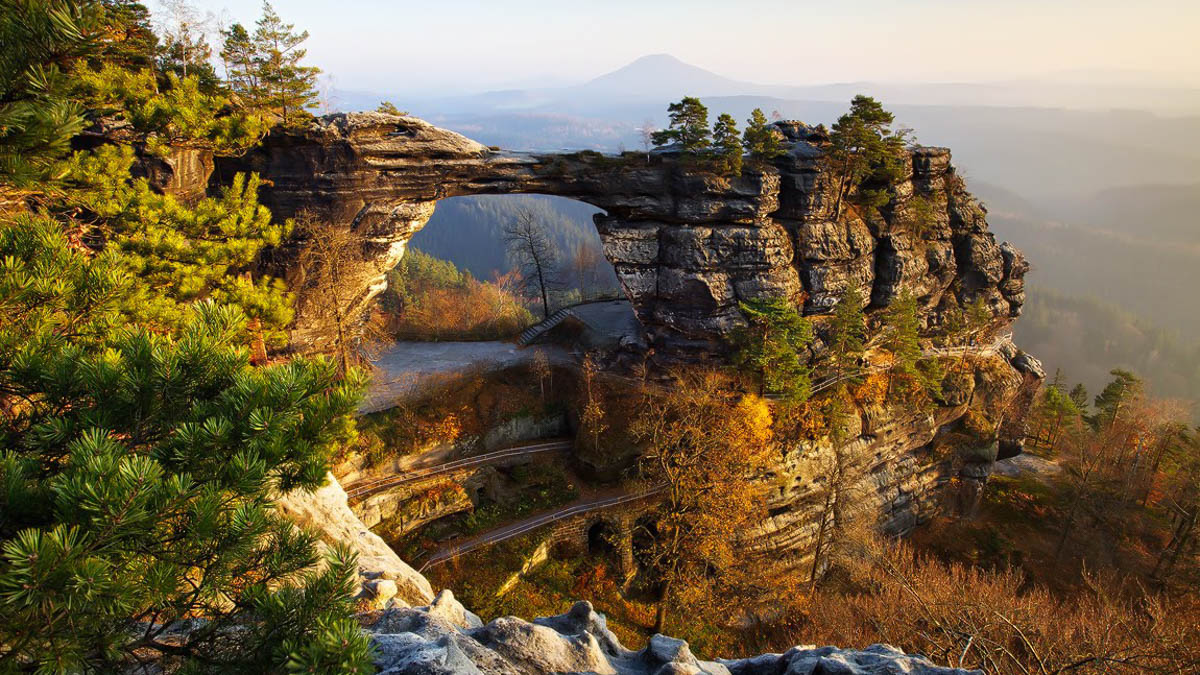 Information about travelling to the Czech Republic

How to get to the Czech Republic

The are around 91 airports in the Czech Republic, but the following cities have the biggest international airports; Prague, Brno, Ostrava, Karlovy Vary, and Pardubice.

The currency of the Czech Republic is the Czech crown koruna, which is often abbreviated as Kč, with the international abbreviation of CZK. Coins start from 1Kč and notes start from 100Kč.

What to eat in the Czech Republic

Guláš is a very popular stew usually made from beef, pork or game, and is cooked with onions and spices, and served with bread. Dumplings are a very popular, traditional side dish, and can be either wheat or potato based. Vepřo knedlo zelo is quite possibly the most traditional dish, which is roasted pork served with dumplings and pickled cabbage.

What to drink in the Czech Republic

Modern beer was invented in the Czech Republic, and it is said that they are the number one beer drinkers in the world! So, it would be rude not to try one of their beers in a local pub while you stay, and many say you need to try a Pilsner Urquell. 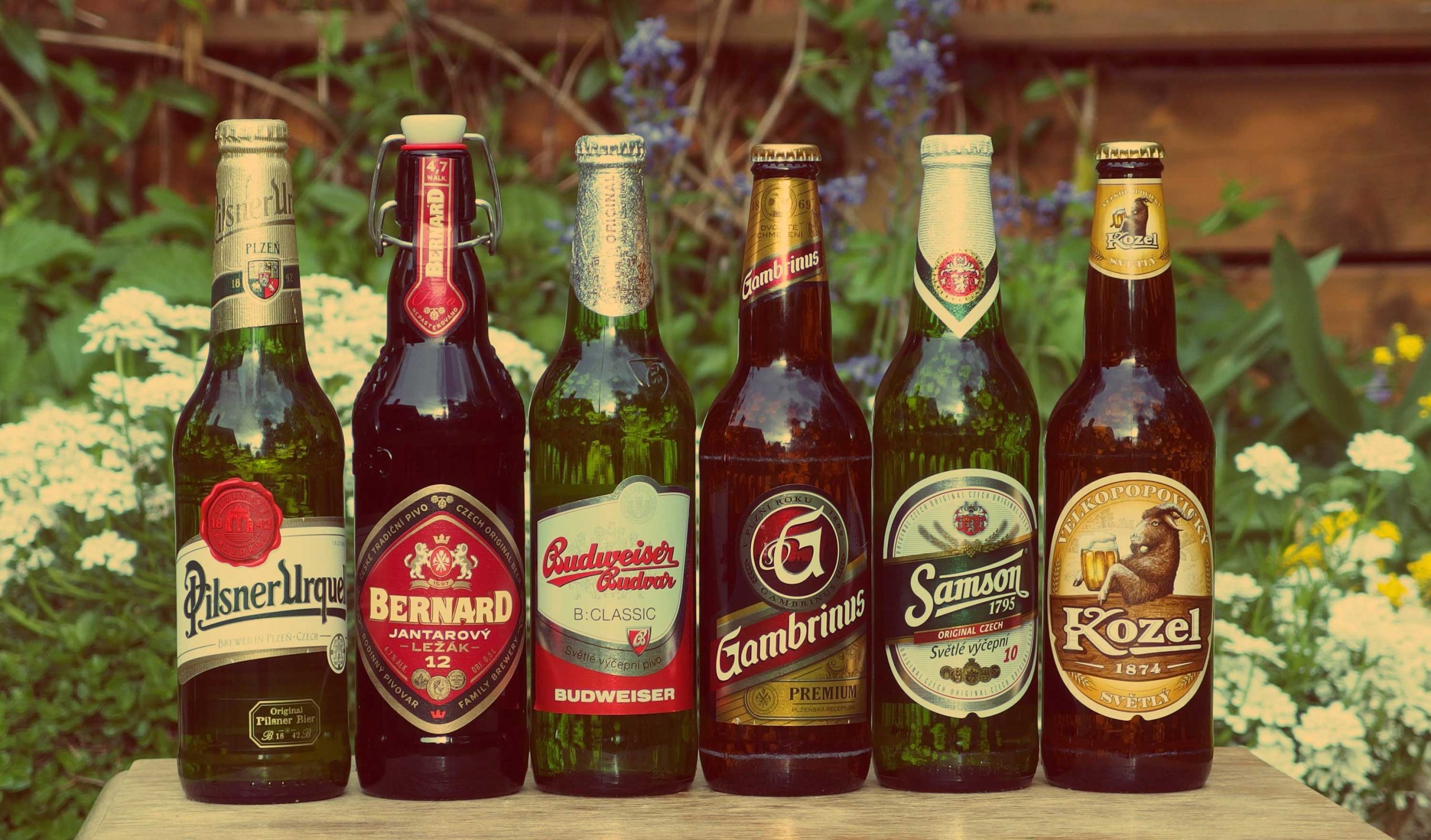 There are many animals that you can expect to find in the Czech Republic including red deer, wild boar, brown hare, fox, roe deer, and white stork.

There are over 20 different species of willow tree in the Czech forests, and sometimes they can reach heights of over 25 metres high. Pine is the most common natural flora in the country.

Volume 10 of Wired For Adventure is out now. Inside, you’ll meet superstar climber Adam Ondra, learn about a man who walked nearly 8,000 miles backwards, and explore one of the world’s remotest islands. Order your copy here and get FREE UK delivery. 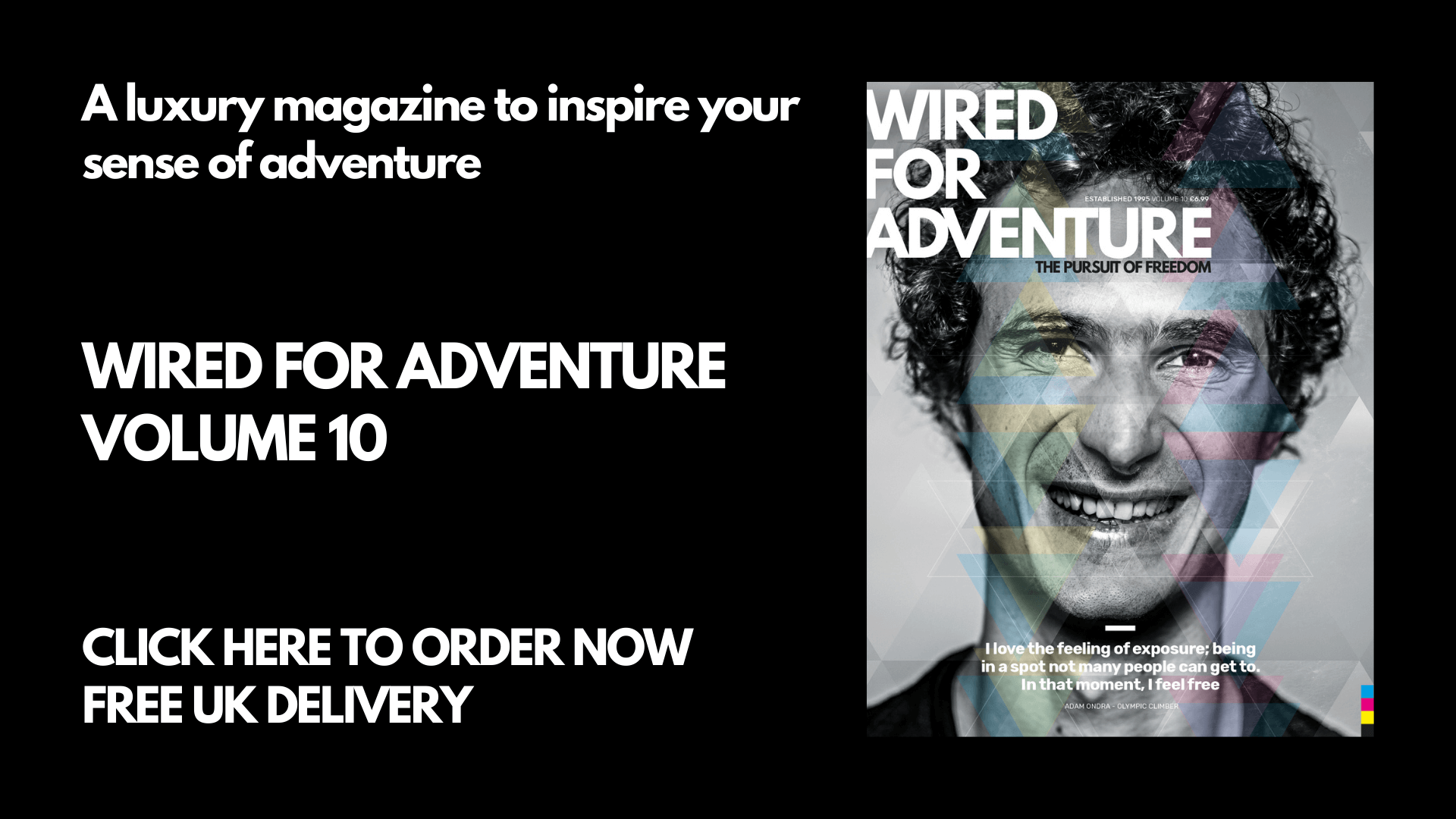 Mount Elbrus: How to climb the highest peak in Europe
Best hikes in the world: Mount Cameroon
The road to Everest: Preparation takes shape in Scotland
Type to search or hit ESC to close