Dominica: The adventure capital of the Caribbean

With sprawling rainforest, colourful reefs and thundering waterfalls, the island of Dominica (also known as ‘The Nature Island’) is the true adventure capital of the Caribbean. Bryn Davies explores the best it has to offer…

If I were to ever find myself washed up on an island, I would be praying to God that it was Dominica. Located between Guadeloupe and Martinique in the eastern Caribbean, it’s an adventure traveller’s paradise. While the island may be small in area, being 29 miles long and 16 miles wide, it’s packed to the brim with remarkable and fantastic outdoor adventure opportunities. Rugged coastlines and sparkling blue waters are complemented by spectacular and jagged mountain peaks on the interior and a verdant rainforest canopy covers much of the island. Dotted around, you’ll find a number of settlements, including the island’s capital, Roseau, in the south, and Portsmouth in the north.

First inhabited by Arawaks, then the Caribs, the island was originally named Wai’tu Kubuli – meaning ‘tall is her body’. It wasn’t until 1493, during the Age of Discovery, when Christopher Columbus came sailing by, that it began to be known as Dominica.

Dominica is the most mountainous landscape in the region, with a dense cluster of nine volcanoes dominating the island, each covered with rainforest that conceals more than 350 rivers and waterfalls. To get an idea of what the place looks like, imagine Jurassic Park, only without the dinosaurs! In fact, to give you an idea of just how mountainous and remarkable the island nation is, when asked by Queen Isabella about Dominica, Christopher Columbus crumpled up a piece of paper, placed it on the table and said, “that is Dominica”.

Visiting Dominica makes you feel alive. You can embark on a full day trek through dense rainforest (including the first long distance hiking trail in the Caribbean, the 115-mile long Waitukubuli National Trail), swim through gorges to hidden waterfalls, scuba dive colourful reefs, and rappel down cliffs on a thrilling canyoning trip.

If you’re looking for an adventurous destination for 2020 that’s out of the well-trodden tourist firing line, you’ll want to make sure you check out Dominica. To get you on your way, I’ve rounded up six adventurous activities in Dominica that should make it to your bucket list.

Due to the island’s topography, Dominica has a rich and vast network of walking tracks of varying difficulties and lengths. From river hikes ending at spectacular hidden waterfalls, to mountain trails up the island’s highest peak, Morne Diablotins (which, at 1,447m high, is also the second highest in the Lesser Antilles), you’ll find a trek to quench your thirst for adventure.

Dominica’s signature hike is the Boiling Lake Trail, a day hike through the active volcano caldera of the wonderfully named Valley of Desolation. The route ends at the Boiling Lake itself, a bubbling greyish-blue water often enveloped in a cloud of vapour – it’s the second largest of its kind in the world. For a real challenge, and to get to experience the joys of the island from top to bottom, there’s the Waitukubuli National Trail, which runs the length of the entire island and is the longest hiking trail in the Caribbean.

Spend a week on the island of Dominica and you’ll be able to dip in and out of various trails, sampling those that take a few hours to hike, to longer treks that offer a true sense of adventure and some of the most remarkable views of dramatic mountain scenery with the lush backdrop of the Caribbean Sea. 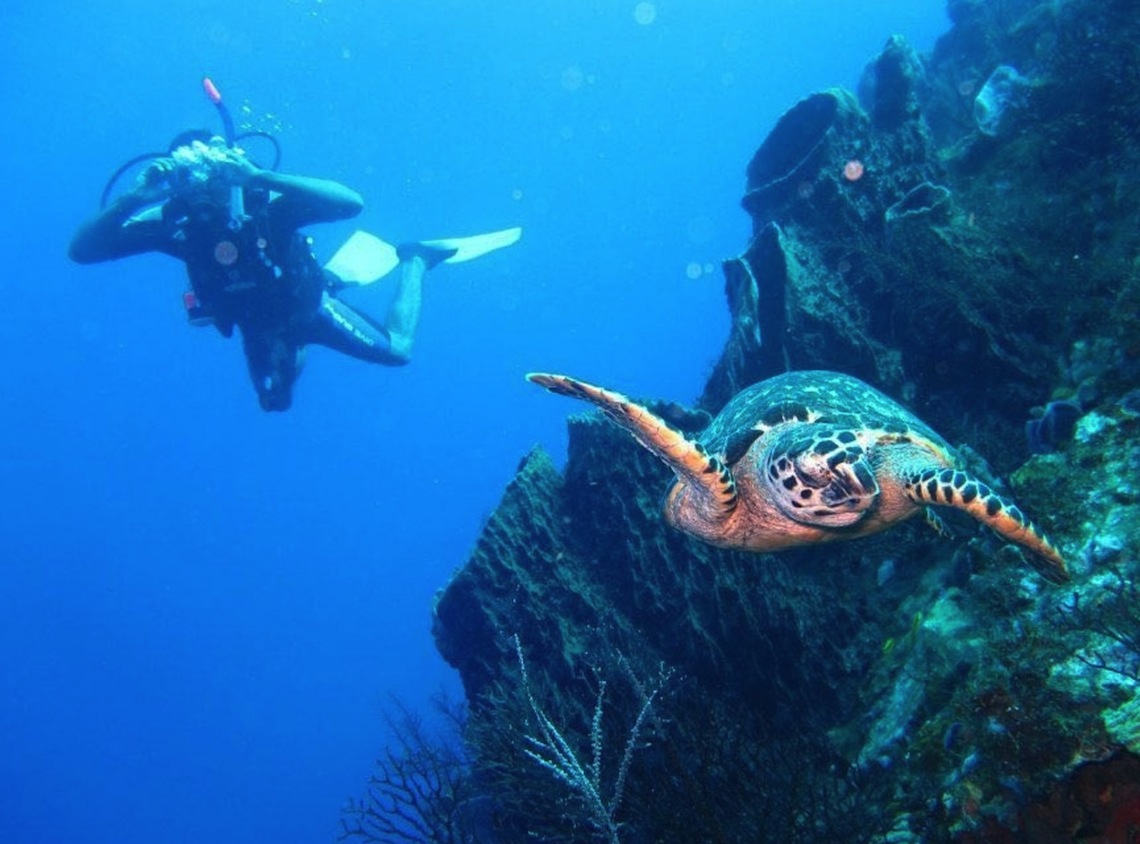 While the hiking on Dominica is spectacular, the island’s crown jewels lie under the sea. The water is clear, the marine life varied, and the weather warm enough to spend an entire day exploring the ocean. Dominica’s west coast is abundant with dive sites, many of which reflect the dramatic topography of the mainland, with steep drop-offs, dramatic walls and volcanic pinnacles.

Colourful and healthy coral reefs teem with marine life of all kinds, including seahorses, hawksbill turtles and eagle rays. There’s also the magnificent and volcanically active Champagne Reef, which is as decadent as it sounds, with bubbles rising from the ocean floor.

Dominica is teeming with wildlife and heading into the rainforest or onto the water is the best way to experience it. As the island’s inshore waters are so deep, they’re the perfect habitat for pelagic sealife. Sperm whales visit the waters around the island year-round and, if you’re lucky you can even spot them from the shore.

Dedicated whale-watching trips on the other hand offer the chance to see these majestic creatures up close, along with dolphin pods, and humpback and killer whales. What an amazing experience it would be to head offshore and be amongst these giants of the sea.

On land, the wildlife is just as amazing, with animals thriving in the dense rainforest that covers the island’s interior. Dominica is particularly good for birdwatching and it’s home to two endemic Amazonian parrots, which you’ll only be able to see here – the Sisserou and Jaco parrots. You’ll also find over 150 other colourful species roaming through and flying over the land.

Life with the locals 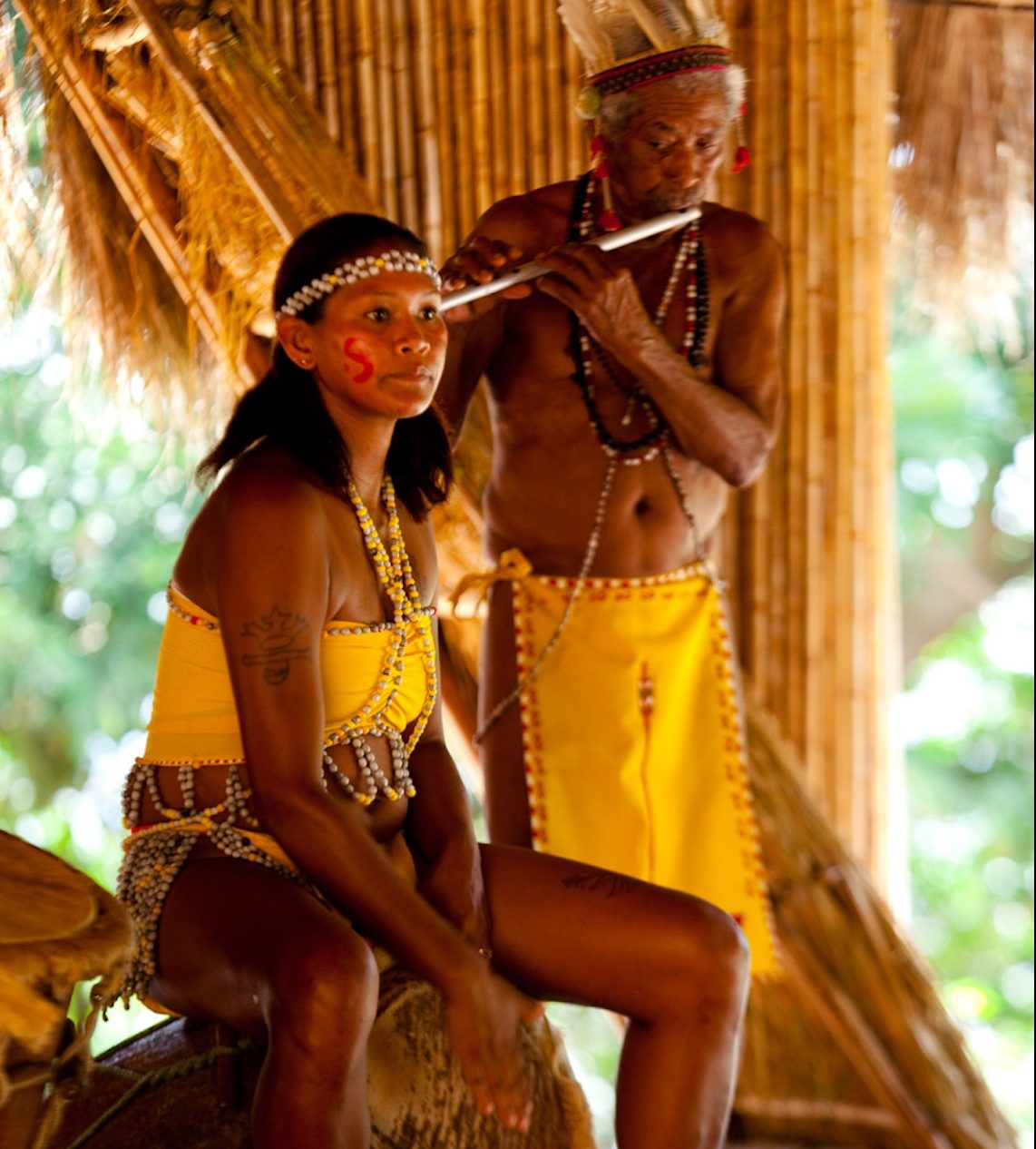 It’s said that Dominica is the Caribbean as it used to be. You won’t find sprawling resorts overspilling with tourists here. Instead, you’ll discover simple, traditional Caribbean communities where you can buy freshly caught fish from the bay side or slip into the village rum shop for a drink or two with the locals.

The island’s capital, Roseau, has a population of roughly 16,500, but beyond there, most places are coastal or rural farming communities. On the rugged east coast, you’ll be able to explore the Kalinago Territory, which is home to descendants of Dominica’s first inhabitants, who travelled along the island chain from South America in dug-out canoes. Here, you can experience their culture first-hand, through storytelling, crafts, and delicious traditional cuisine.

Wellness in the wild 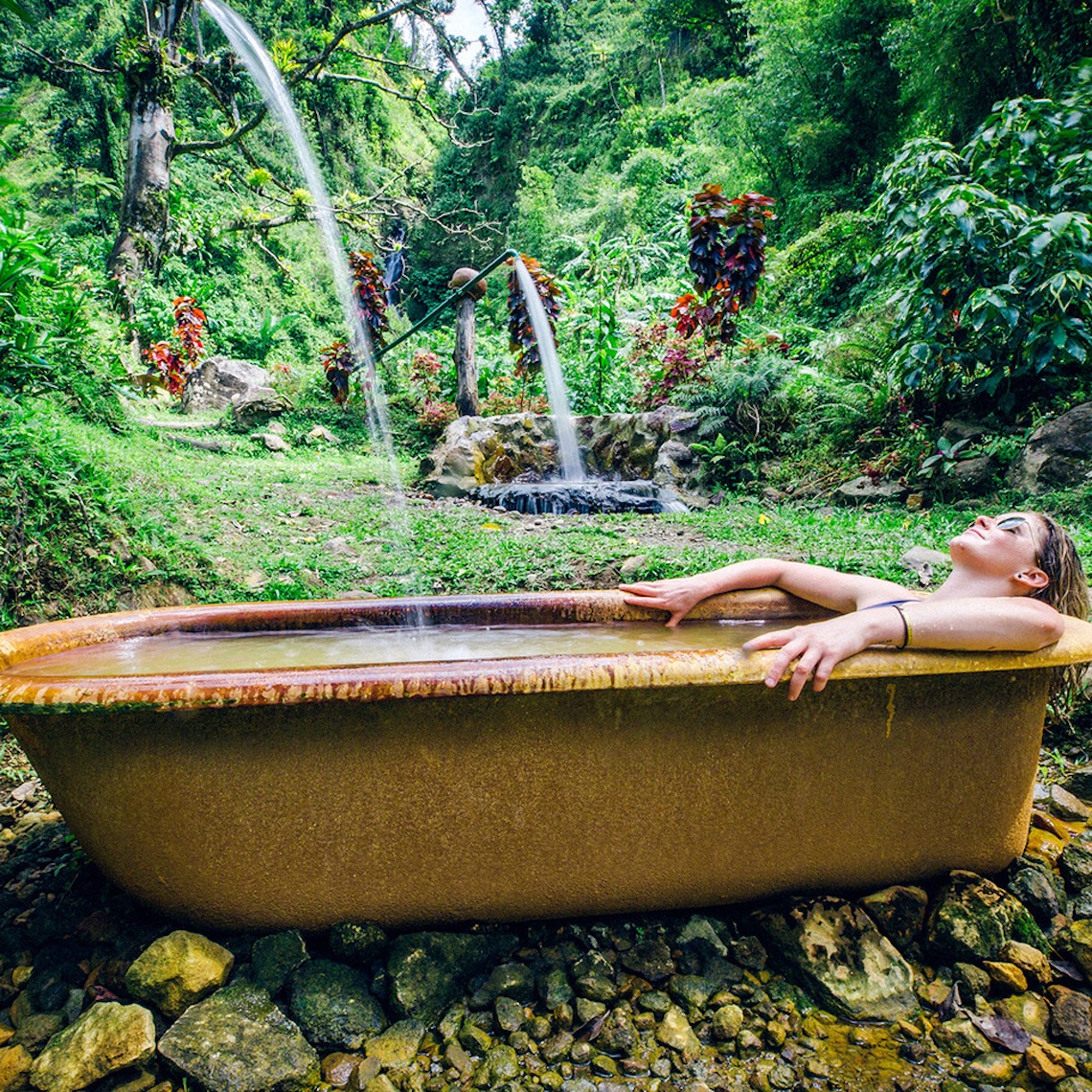 Along with being the ‘Nature Island’, Dominica is also known as the eastern Caribbean’s health and wellness capital. The roads on the island mainly hug the coastline, leaving the interior mostly unspoilt with raw nature, clean air, and water so pure that you can drink straight from the mountain rivers.

The island is also dotted with hot, mineral-rich springs and pools, where you can soak and relax in the open-air warm water. Add to this the wholesome food from Dominica’s traditional farming and fishing, some invigorating exercise and a heapful of adventure, and you can’t help but feel great on Dominica. 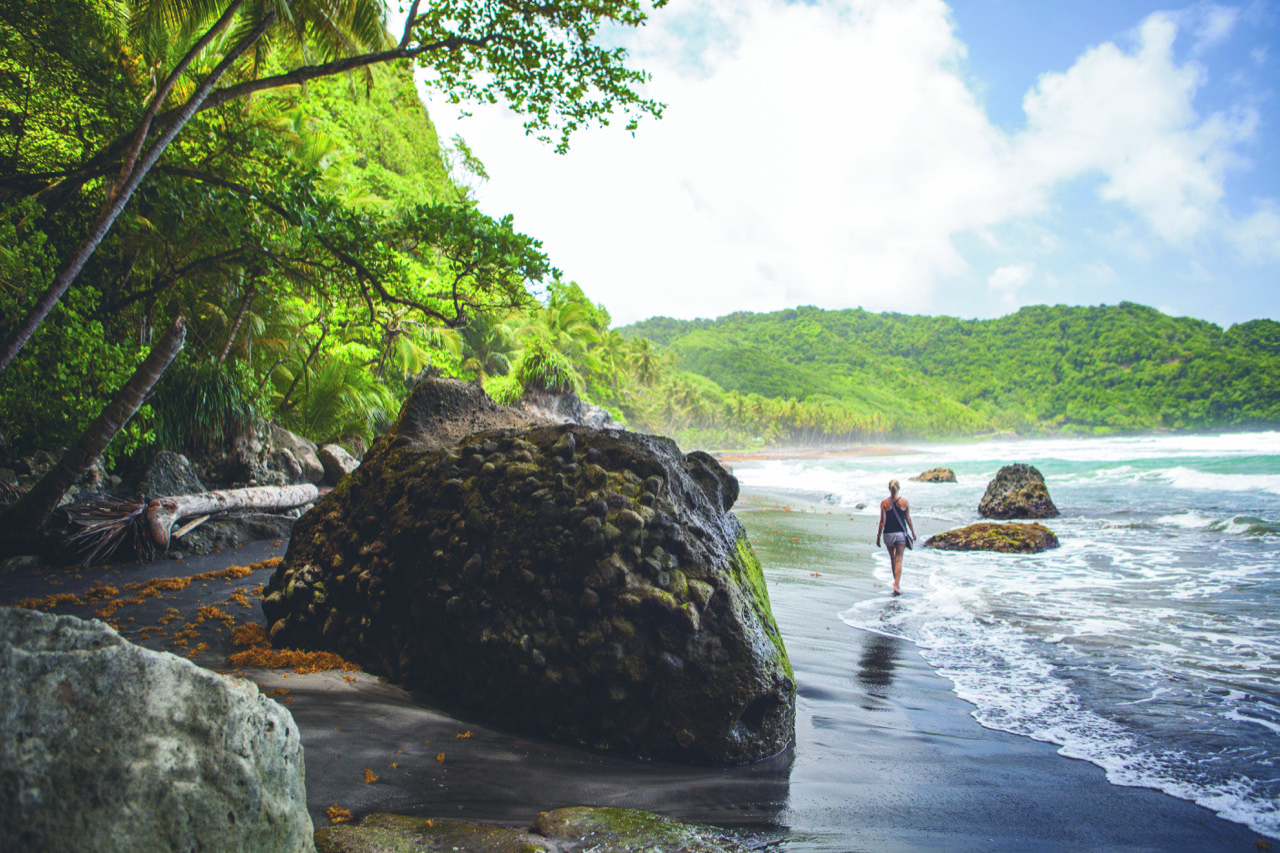 In 2017, Hurricane Maria devastated the island of Dominica, heavily damaging the island, its infrastructure, and many of the buildings on the island. Today, there is a remarkable comeback taking place. Many of the previously affected properties have reopened, while there’s a large amount of new developments and resorts planning to launch throughout 2020.

The Cabrits Resort and Spa Kempinski has recently opened its doors on the island, providing a top-class, quality experience to travellers. The 151-room resort, which offers a breath-taking panoramic view of the Caribbean Sea, gives you the opportunity to indulge in luxury after a hard day on the trails, with amenities like a full-service spa, international cuisine, and a state-of-the-art fitness facility.

A second hotel, The Anichi Resort and Spa, will start welcoming guests in 2020, offering 128 rooms. It’s billed to be an environmentally sensitive, eco-chic haven that’s located on 12 acres of prime property at the wonderful Picard Beach, Portsmouth. Safe to say, if you like to explore in the day and relax in style in the evening, Dominica has you covered.

How to get to Dominica 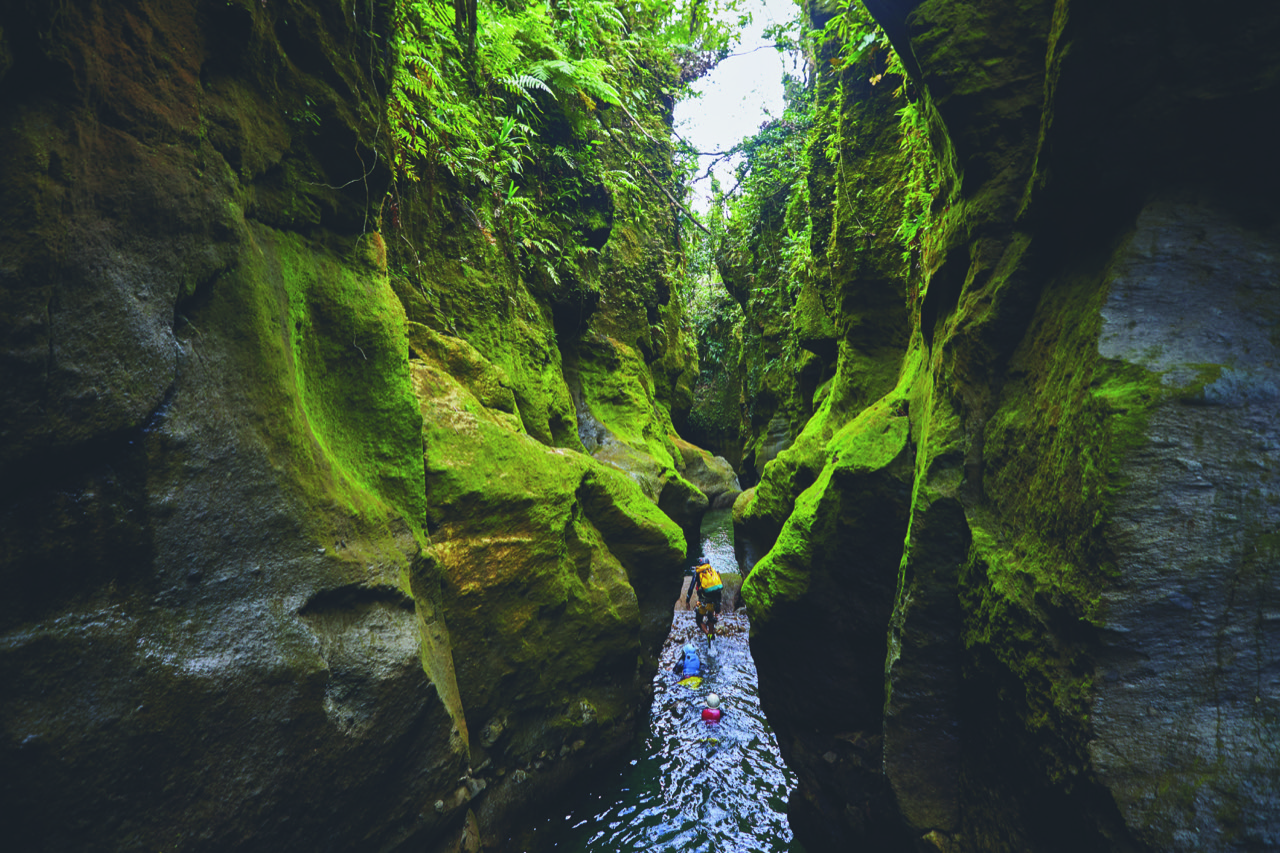 There are two airports in Dominica: Douglas-Charles (DOM) and Canefield (DCF). Most people visiting the island will arrive through Douglas-Charles, which is the larger of the two airports. That being said, both are only regional airports, so you won’t be able to fly direct from the UK – instead your best bet is to get a flight to Antigua, Barbados, Martinique, St. Maarten, Puerto Rico, Guadeloupe, or St. Lucia where you’ll be able to get a connecting flight to Dominica.

Once on the island, taxis are easily available all over, there’s a reliable public transport system of private minibus operators, and there are a number of car rental agencies offering vehicles for rent. If you are looking to hit the road, you’ll need to get yourself a driver’s licence, which will cost $30 (approximately £8.60).