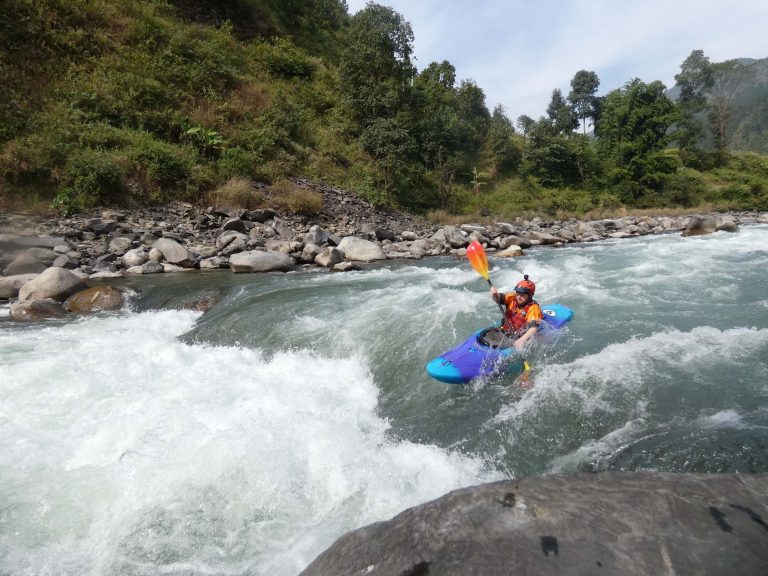 Join Mathew Wilkinson from Pyranha Kayaks as he takes on eight of Nepal’s fastest-flowing rivers.

A group of friends and I had been talking about taking on Nepal’s fastest-flowing rivers as early as 2011. But it wasn’t until 2019, when one of us bit the bullet, booked the trip, and sent the rest of the group details, that we all realised it was now or never.

With the looming feeling that this might be THE chance, it was hard to say no. And soon, we found ourselves at Manchester airport with bags packed.

My ‘bag’ was a kayak: a Pyranha 9R II Large, to be precise. Knowing it was definitely over the maximum length, and thanks to all the kit I’d packed inside it, almost certainly over the weight limit too, I was crossing everything in the hopes it would be allowed through baggage. 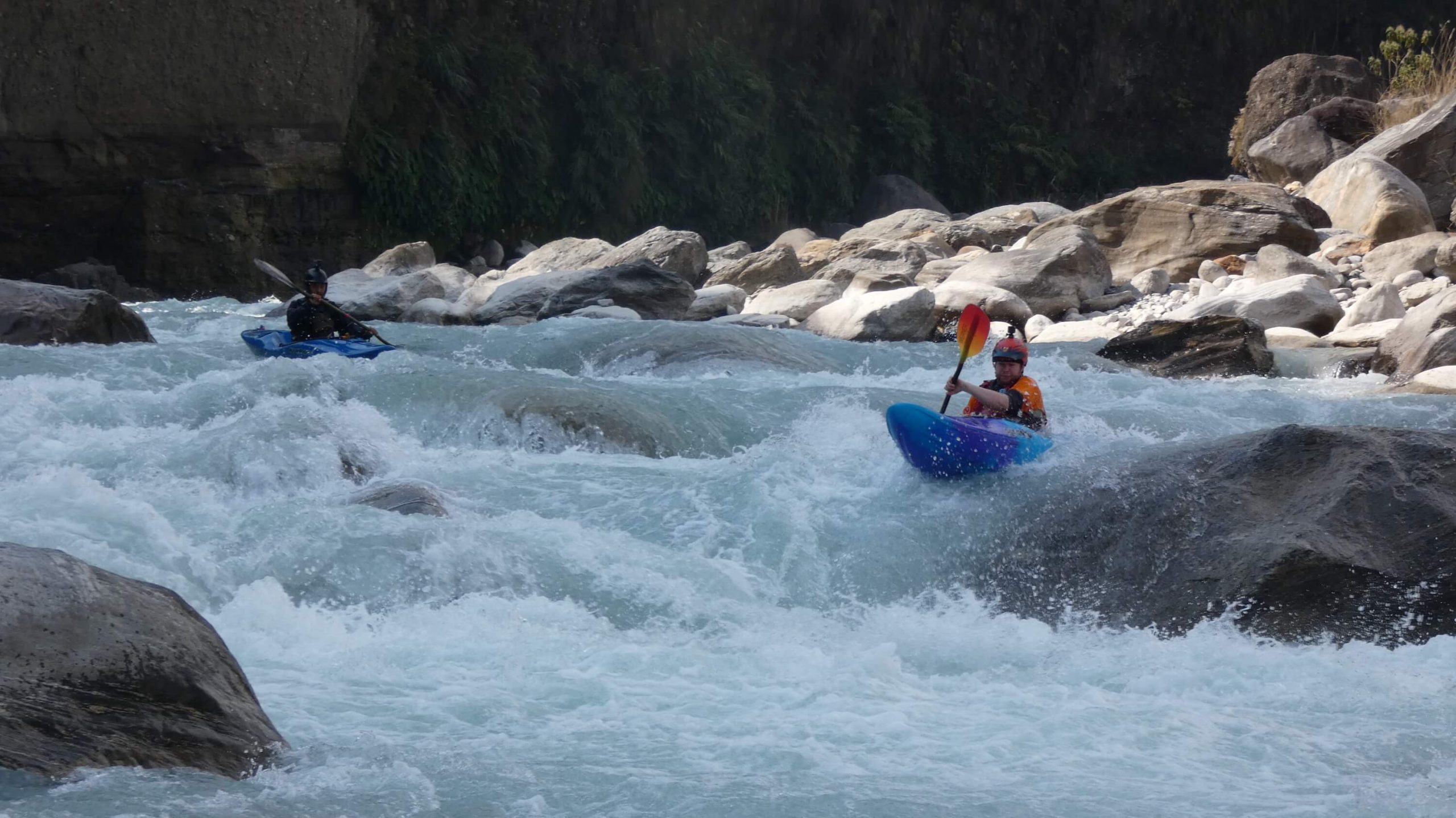 Thankfully, my luck held and I waved goodbye to my kayak as it disappeared into the mysteries of the world behind the rubber curtain. Is this the same world as behind the pins at a bowling alley? We’ll never know.

The trip began in earnest when we met up with the guides and the rest of the group in Kathmandu. Piling boats and bodies onto a coach, we headed for the first river of the trip – the Trishuli – with the guides stood on the coach roof to lift the power lines over the kayaks. I don’t know what these guys are paid, but it isn’t enough…

A few hours later, we reached the banks of the Trishuli: the first of Nepal’s fastest-flowing rivers. After unloading a mess of kayaks and people from the coach, we began the process of getting into our kit and onto the river. This should have been a straightforward operation, but these things always seem to take longer when there are more kayakers involved.

The Trishuli is a big-volume river. With its large horizon lines, more and more of the river reveals itself as you approach the place where water meets sky. Armed only with a brief description shouted over the roar of the water before each rapid, there was often very little time to catch a glimpse of a clear path through the chaotic waves. It was a case of believing in your own judgement and learning from the mistakes of those in front of you.

A long, uncomfortable coach ride after a day of kayaking meant we were all looking forward to going to bed when we reached the hotel in Pokhara. 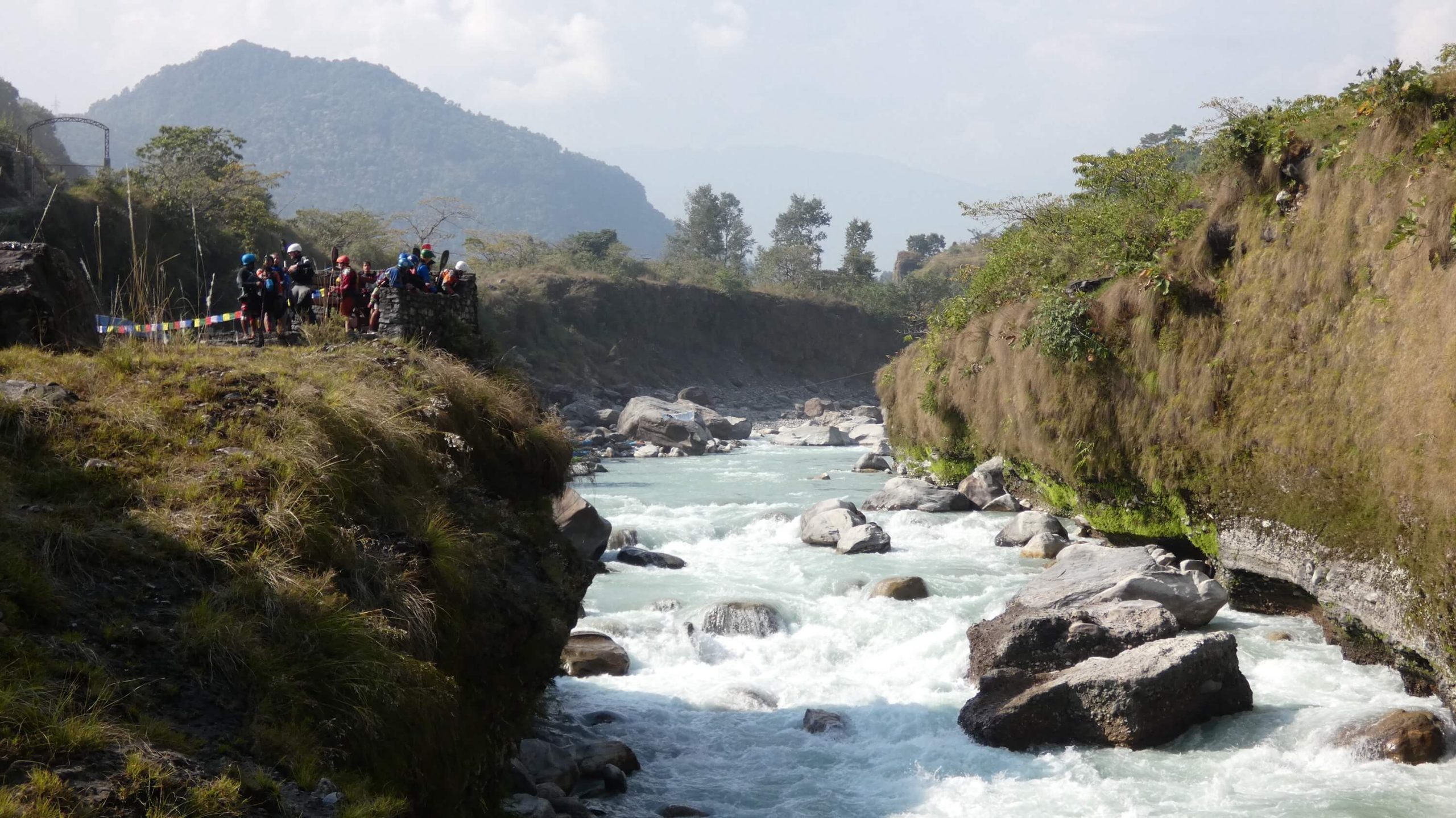 The Upper Seti is more technical than the Trishuli. There was even occasion to get out of the kayak, climb up to a clifftop ruin, and scout a steeper rapid leading into a gorge. I was relatively pleased with my line, right up to the point I mounted a rock at full speed, did a 180, and had to finish backwards…

Like the Upper Seti, the Modi is a boulder-garden style river with a select few lines winding through the boulders. The sustained, mega-train approach to guiding did not pair well with this style of river. We were all trying to stay close enough to the person in front to see the line they were taking, but not so close as to lose any space to pick up speed and clear a feature if we needed to.

In a boat as fast as the 9R II, playing such a close-quarters game of follow-the-leader was not an option. I found myself forced into an alternative line on more than one occasion, even having to boof (jump) over the person in front after they’d got stuck in a hole. This made me frustrated, as this rarely meant I was able to run the rapids with any style. I was just rolling the dice and taking what I was given. 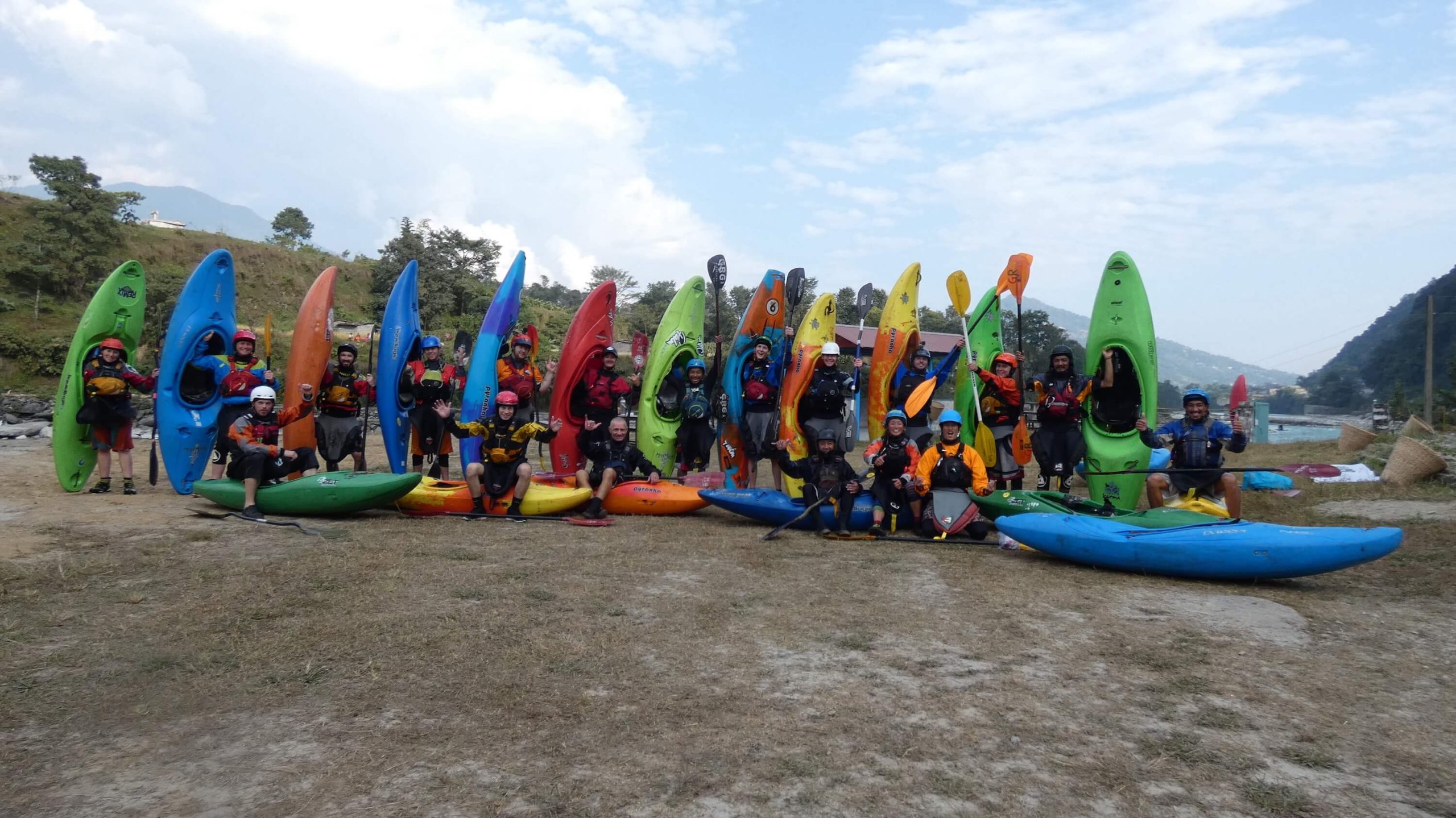 Singing loudly to rock music is generally how I vent any frustrations. Thankfully, Nepal has a strong rock scene. That evening we headed out to some of the clubs in Pokhara and jumped around and screamed along to the music into the early hours.

Looking back now, it feels strange to have had a rest day after just three days of kayaking. But when I remember how much of a feat of endurance the coach rides either side of the kayaking were, I realise why it was necessary.

We used our rest day wisely by doing the most relaxing thing imaginable. We took to the hectic, potholed roads of Nepal on mopeds, before heading off-road up a mountain track. I truly don’t know how, but we all returned safely and got our full deposits back.

The Upper Marsyangdi featured a chunky, S-bend rapid avoiding a large hole and an even larger boulder. I managed to stick the first move. But on the second bend, I went right through the guts of a ‘pit’ of water which threw me and my 9R II over backwards and left me rolling in the turbulent water afterwards. 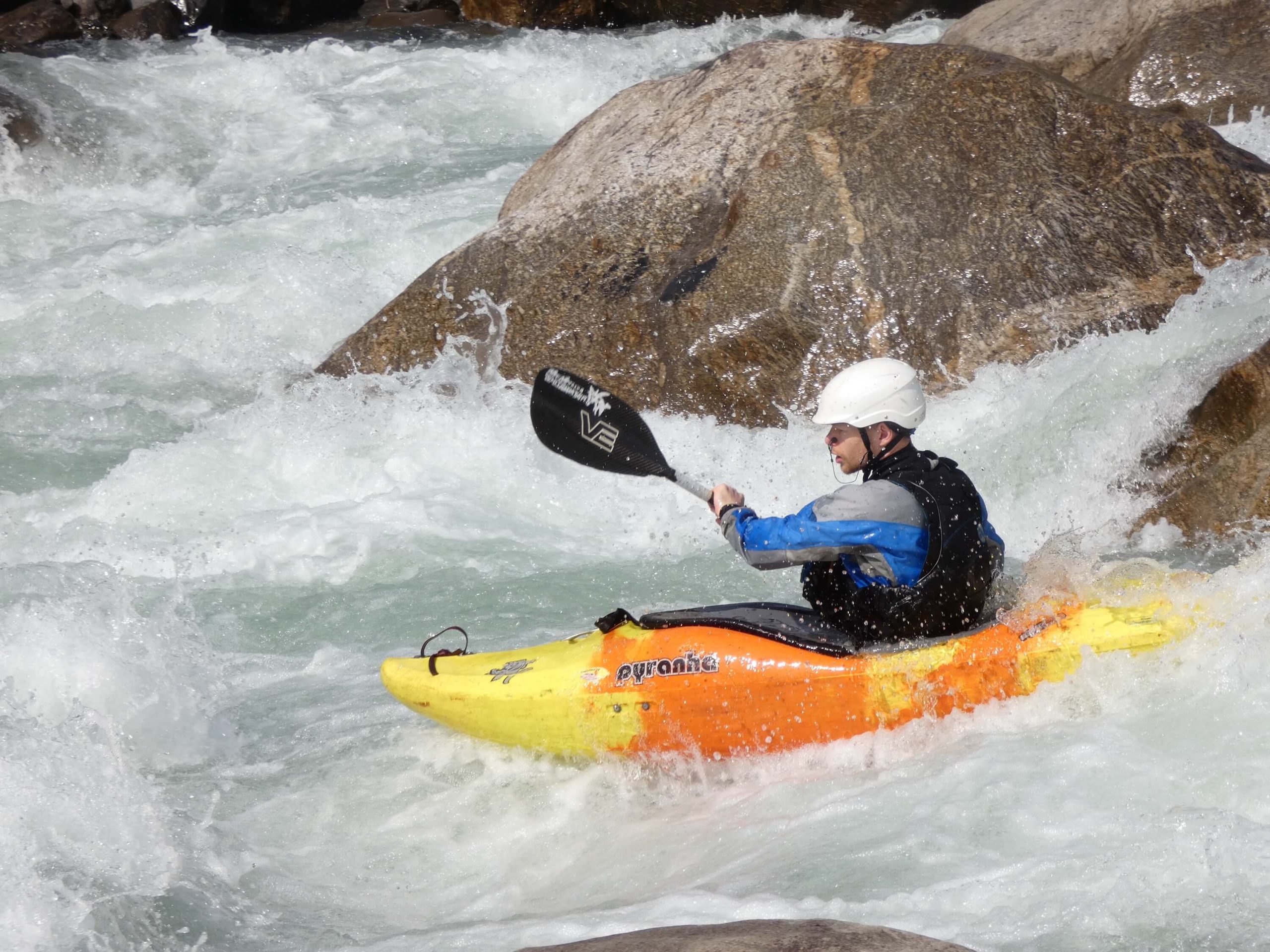 The Lower Marsyangdi offered no warm-up time at all, and it was straight into the meat of the rapids. Overall, it felt quite similar to the Upper – just a little more continuous and slightly fewer boulders.

Although it was right next to a road with trucks thundering past in the middle of the night and occasionally sounding their horns, I think the next accommodation we graced was my favourite. It consisted of metal framed, canvas tents with proper beds built into them. Next to a beautiful pool and a covered dining area where we were served dal bhat – spiced, stewed lentils for absolutely every meal.

The Lower Bhote Kosi was a step down in intensity and a chance to unwind a little. So naturally, it’s where I had my first out-of-boat experience of the trip.

The get-on for the Balephi was right in the centre of a small town. A few of the locals, curious about what we were up to, came over as we were kitting up. It was nice to see so many smiling faces interested in what we were doing. But it did make it tricky to find a secluded spot for a toilet break after the long coach ride in.

The river itself may have been my favourite though, with plenty of flares off smooth boulders up for grabs. 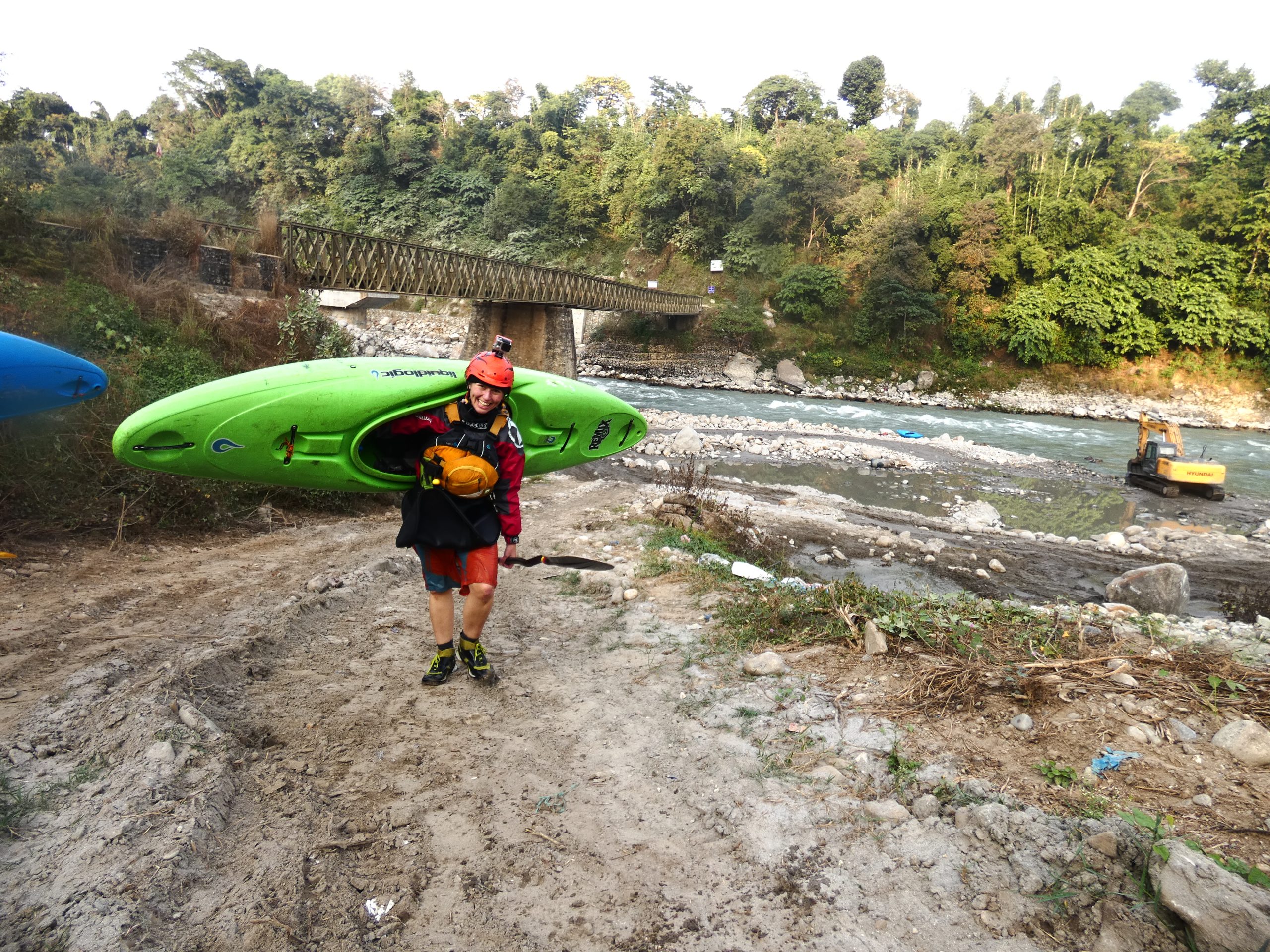 On the coach ride to the final river, I felt the absence of Ben and Sam. Both undeniably better boaters than me, who’d elected to go for the easier river on offer that day.

Being the last group to depart the eddy and having our guide swim twice and then decide to give up and get off in the first 500m wasn’t the most comforting start, either.

We merged into two groups, and although the rest of the river was pushy, it was enjoyable. A great end to a long-anticipated trip that was definitely well worth the wait.

Get out on the water today

To find out more about the kayaks Mathew took on Nepal’s fastest-flowing rivers, visit pyranha.com.