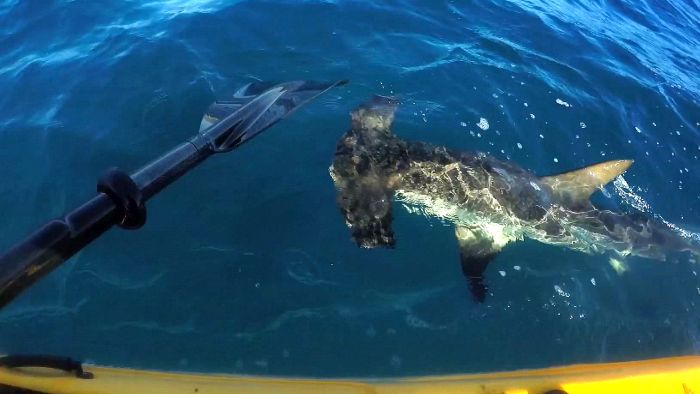 Video of the week: Kayaker fights off angry hammerhead shark

Now we love to hit the water for a decent kayaking session, and we like to encourage you to do the same too. But this crazy video of a kayaker being attacked by an angry hammerhead shark may make us think twice before getting back out on the water!

The video was shot by Mark McCracken off the coast of Santa Barbara as he was fishing from his kayak. After feeling a few bumps in his kayak, he notices a hammerhead shark circling and makes the decision to defend himself.

“I knew that the only way I was gonna be in real danger was if I was in the water. And I also knew as long as the shark didn’t hit my kayak anymore, there’s no way I would be in the water. So I chose to use my paddle to keep him away from my kayak,” he said in the video description.

After admirably defending himself, McCracken then sets off for shore and is stalked by the shark right up to the beach. The action kicks off just after the minute mark and is well worth a watch, even if it does put you off the sea for a while…

Sharks aren’t all bad though! Check out this video of a couple of divers swimming with tiger sharks.