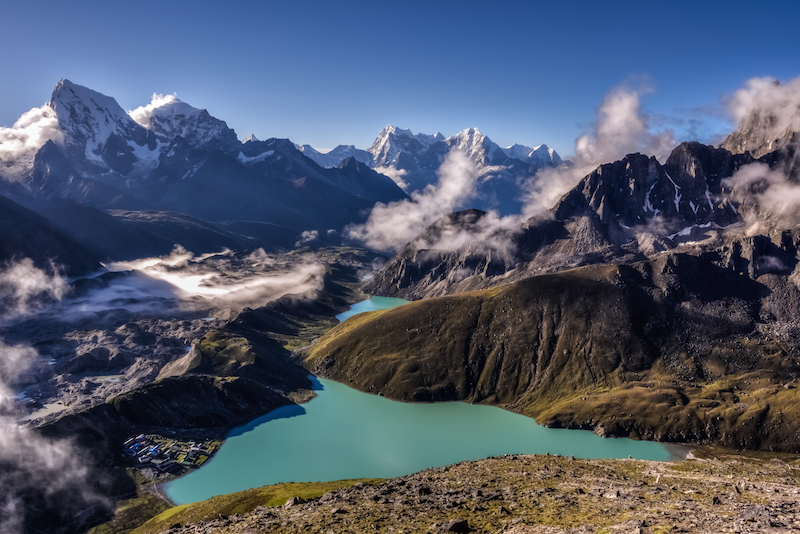 Gokyo Ri: The perfect alternative to the Everest Base Camp trek?

While most people tackle the popular Everest Base Camp trek to catch a glimpse of the world’s highest mountain, there may well be a better alternative. Claudio Sieber takes on the Gokyo Ri Trek…

As I waited in the cafeteria for my plane to depart, the monkey next to me threw down the garbage bin to check for something edible, but no one cared. It seemed to be a normal day at Kathmandu’s domestic airport. Surprisingly, I shared the ride to the small aircraft with the pilot himself. “Your private plane,” he said, flashing a smile. Except for him, the flight attendant, myself and some cargo, the plane wasn’t too busy. 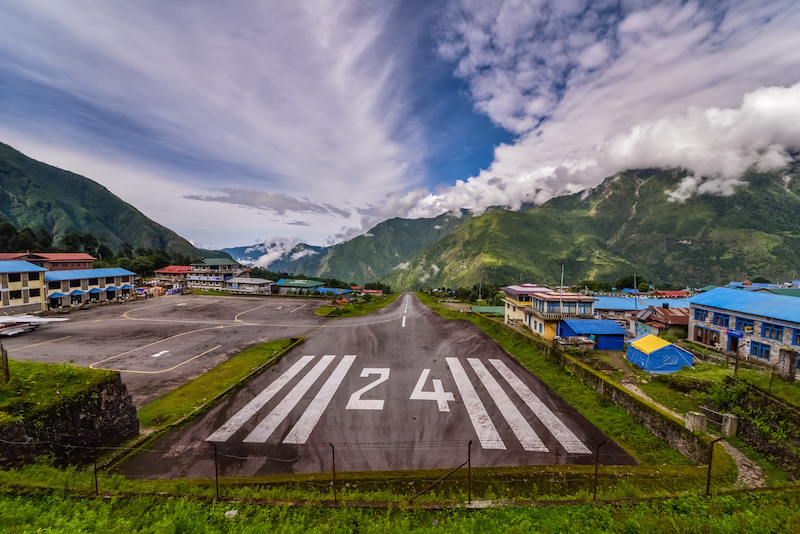 While I stared out of the plane window in the hope that I might be able to make out the snow-capped peak of Everest, the stewardess moved her folded hands to her forehead and then to her heart. Here I was on a flight to infamous Lukla while the stewardess made casual Buddhist prayers. The rapidly changing weather situation in the region glorifies the small airport as one of the most dangerous spots in the world for landing or take-offs. Sir Edmund Hillary once had it built for his Mount Everest expedition. Ever since, eight aircrafts have not reached their destination in one piece. Hillary philosophically quoted after he and his partner, Tenzing Norgay Sherpa, succeeded in climbing Mount Everest: “It’s not the mountain we conquer, but ourselves”.

Since 1953, the sherpas have been considered as inexhaustible carriers, concentrated manpower with lungs made of steel and valves. One of them is Kami Sherpa, whom I followed to his village after landing. As we walked, I tried to help him carry the little things that could not be optimally stacked on the 80kg cement bag on his back. Put me in that position and I would cry like a little girl. He was fine, he mentioned parenthetically. Others would march for six hours with 150kg of material on their back. 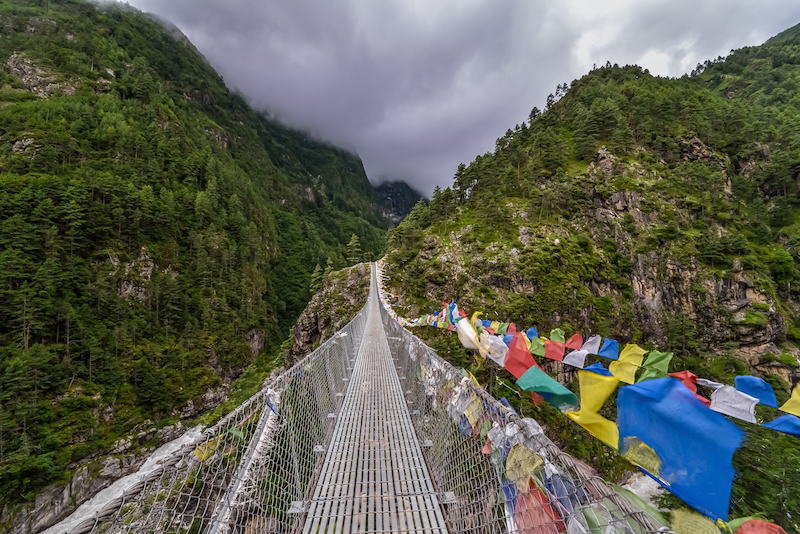 It has been roughly 500 years since the Tibetan minority decided to settle in Nepal’s mountain area. For many, everything has changed since then. Some own hotels, study in Europe or play baseball in the American MLB. For about a tenth of the caste, however, the daily struggle remains. Several times I crossed paths with teenagers bent over at 90-degree angles under heavy loads. They carried beds (including mattresses), corrugated galvanized iron, pillars, dozens of beer crates, and building goods. The caste of the Sherpa obviously takes the renovation for their cracked houses into their own hands.

“Our government has neither delivered money nor support!” Barhat Sherpa hissed from the other end of the table where I rested after some hours hiking. His house has some cracks, but they’d have to organise the cement themselves from Kathmandu, he explained. Barhat and the other residents of Machherma are among the Priority B people – those who have not been harmed by the effects of the quake but own a cracked house. Many of them depend on tourism and tourists who do not come anymore. Too many images of collapsed houses and catastrophic situations on television has made sure of that in recent times.

Many forget that Nepal is quite a big piece of country. Immediately after the earthquake, Indian Mi17 helicopters rushed to the flattened villages. They even flew more often than Nepalese choppers. Their maximum load weight was 13 tonnes, but the average freight? Media guy, cameraman and pilot. And top of the agenda? Broadcasting pictures and videos of villagers who bleed as much as possible. 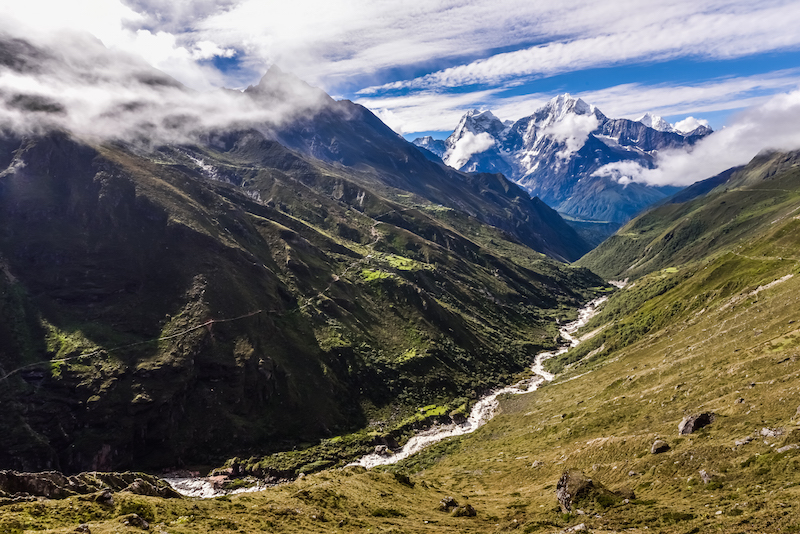 I also remembered the words of Julien, a helicopter pilot from France, whom I recently met in Kathmandu. He still flies missions to this day. His organisation would deliver rice, medicine, and supplies to the destroyed villages (Priority A people), but 15,000 tonnes are still waiting to be moved. On the way back to the capital the helicopters usually fly empty. Injured people stay where they are, or they walk five to 10 days to the nearest street, to eventually hitch a ride to a hospital. The United Nations and Nepal’s government do not allow passenger transport on those missions because of liability reasons.

After an evening of rest and conversation, I was ready to get started. The Gokyo Ri Trek is of moderate length and difficulty and the highest altitude on the trail is around 5,400m. The summit of Gokyo Ri is almost at the same altitude as Everest Base Camp, and so altitude sickness can very easily ruin your trek. Having said that, on the Gokyo Ri Trek, there are fewer nights to spend above 4,000m than on the Everest Base Camp trek, making it less problematic in terms of potential altitude-related problems.

The first part of the trek follows the same route at the Everest Base Camp trek. From Lukla, the trail snuggles up to the Dudh Koshi River and crosses over suspension bridges whenever the path becomes too difficult. After some hours of hiking the small settlement of Phakding came into view. I decided to hike further along the rhododendron flowers and blue pine forest as I still felt energetic enough to reach the prosperous Sherpa settlement known widely as the Namche Bazaar (3,440m). The village is the main trading hub of the Khumbu region, where native traders and yak caravans of Tibetan merchants rub shoulders. Even though Namche Bazaar isn’t much of a picturesque highland village, it’s well worth a stay for altitude acclimatisation. The town has a number of comfy lodgings and internet cafés catering to all the needs of a fairly exhausted hiker. 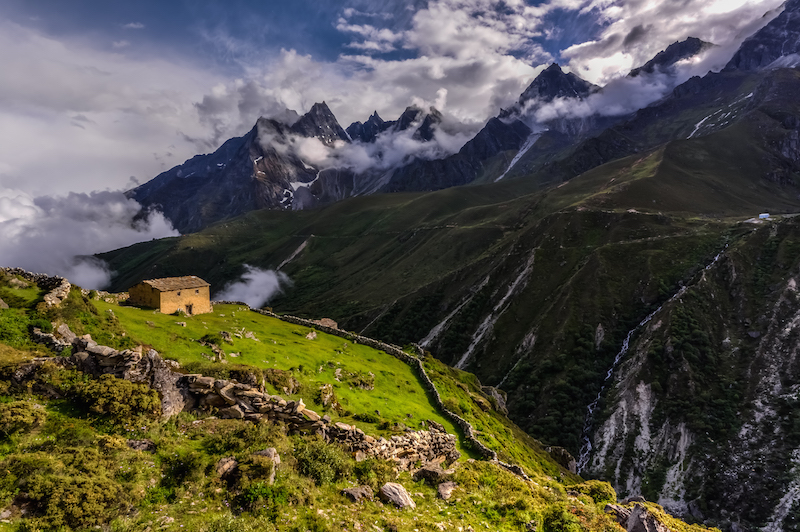 Several ways lead up to the lovely village of Khumjung, which is accompanied by breathtaking views of Mount Thamserku, Ama Dablam, and a peak called Kantega (also known as The Snow Saddle). After passing the little village, the trail descends through Kayangjuma to Sanasa, and then ascends up to Mong La Pass. After around seven hiking hours, I finally reached the village of Dole, where I rested for the night.

The following day, I started ascending through lovely villages and a rough landscape towards the small hamlet of Machhermo, where the legendary Yeti was supposedly first sighted in 1974. On excellent paths, I reached Gokyo after three days of rapid hiking. Captivated I just sat for hours to watch the mystical clouds on their way up to the turquoise-blue Dudh Pokhari Lake, where the Yaks fed on purple and yellow flowers, the winter food for these majestic animals. 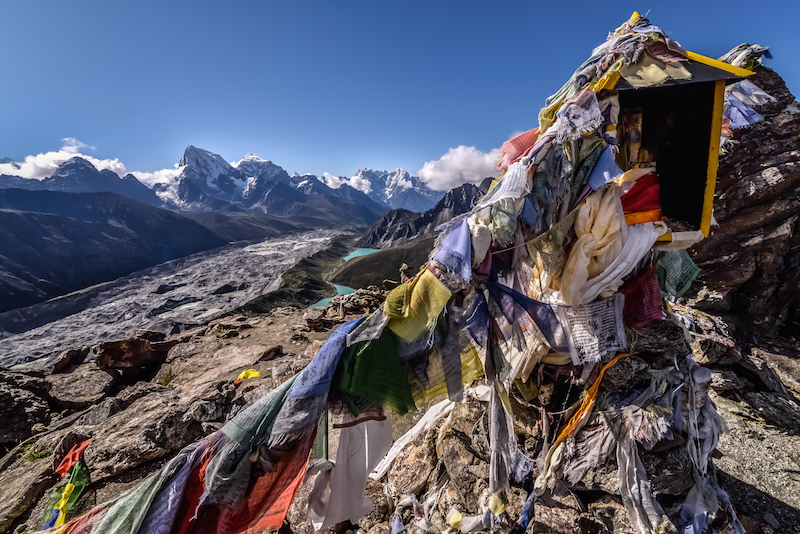 Early in the morning, I tortured myself for three hours as I hiked up to the nearest hill, the so-called Gokyo Ri, to catch a 360-degree view of Gokyo and Cho Oyu with its glacier tongue. Being Swiss, it’s hard to impress me with mountains, but comparing the Alps with Nepal’s summits, we basically just have hills at home. Take Cho Oyu, which rises up to 8,201m (that’s like stacking the Matterhorn on top of another Matterhorn). Gokyo Ri, which is at the same altitude as Everest Base Camp, marks the end of the popular Gokyo trekking route and offers the most exquisite panoramic views, including five 8,000m peaks: Mount Everest, Lhotse, Makalu, Kangchenjunga, and Cho Oyu.

The next day I felt ready, and Mount Everest was just around the corner. My idea was to cross over to base camp by taking the rear entrance. I had been told that I’d probably meet Sherpa communities after successfully crossing the glacier tongue of Cho Oyu. Before setting off, my host in Gokyo gesticulated stones falling on my head, which I considered a bad sign for my upcoming quest.

After seven hours of constantly losing myself on the unmarked trail, hiking uphill over 1,000m of altitude, and observing the monsoon clouds rising once again, I faced a difficult decision. Option 1: To climb down again on the unstable rocks (bigger than my own size), which had recently been covered by snow and hail. Or option 2: To try to cross a glacier where there was no route (except for the note I’ve found on a random map which says “icy crossing”), during the monsoon season no less.

For a while, I was borderline with my decision, and then I reminded myself of the American who recently disappeared up here… At the time of writing, he has been missing for two months. He too was travelling without a guide and everyone (including the checkpoints) let him pass without any concerns. He too was convinced of himself. Angry about myself, about the weather, almost about everything, I climbed and occasionally slid downhill. Everest had to wait. 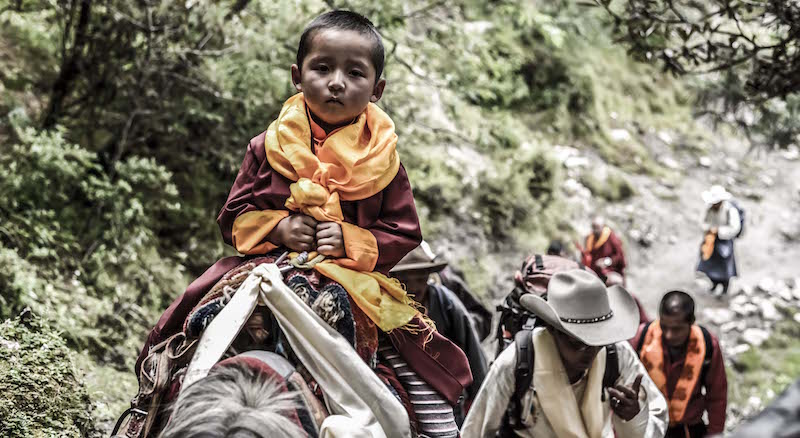 Thanks to my decision, I soon found myself in a touching situation. As I made my way down, a four-year-old monk was riding his horse up to Thame escorted by a group of Sherpas in traditional clothing. I was formally introduced to the new Lama of the Thame Monastery. For several years, the monkhood was scouting for the reincarnation of the deceased lama, and here he was, riding past me. The little boy had the same visions like his precursor and he had always been craving a visit to the region of Thame (which he had never seen before).

When to hike the Gokyo Ri Trek

One of the best times to trek in the Everest region is between February and May, with clear, bright days and warmer conditions. As it is just after winter, there can be occasional showers but most days tend to be stable and dry. September to October is another popular period, as there is clear and consistent weather giving you the chance to enjoy spectacular views.

How to do the Gokyo Ri Trek

While Claudio undertook this hike independently, unless you are very experienced in hiking in Nepal and navigating, we’d recommend using a guide or tour provider. The Walking and Climbing Company, KE Adventure Travel and, last but not least, Himalayan Wonders all offer trips similar to the one you have read about here. They vary in length, route and price, so have a look to see which best suits your wants and needs.

At the very least, you’ll want to plan eight days for this trek from the start to the finish, though most people spend around 10-14 days on the trail including acclimatisation days. It’s important to remember bad weather frequently closes Lukla airport, so it’s clever to allow some extra time in case of delays if flying to Lukla.

What to take for the Gokyo Ri Trek