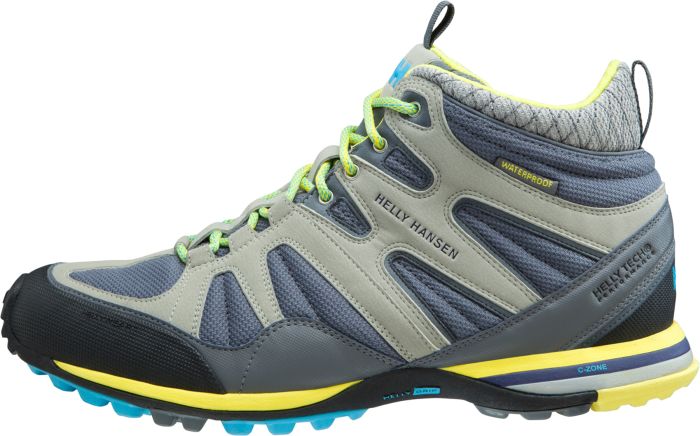 I’ve always liked Helly Hansen kit. I’ve been using it since I was a young lad and from memory I’ve never had any problems with it. It has always been a pleasure to wear, particularly the company’s Lifa base layers which have been my go-to thermals for a while now.

It was with these fond memories of the brand that I slipped my feet into the Razora Mid boots and in the hundred or so miles I covered in them I was both impressed and disappointed. It was a weird mix of emotions.

As far as three-season boots go, the Helly Hansen Razora Mids are going to best suit you if you’re hiking predominantly in summer. They’re very light, have a minimalistic feel to them and they almost have the look of an approach shoe, the difference being that the cuff extends up to the ankle to offer an element of support. Waterproofing is provided by a HellyTech membrane (which does its job of keeping the water out) and grip is provided by a HellyGrip sole, Helly Hansen’s own design.

Despite a lack of padding and cushioning on the inside, the Razora Mid is incredibly comfortable to wear, even over long periods of time, to the point where I was choosing to put them on instead of my casual trainers. The foot flex is spot on and there’s an area of cushioning on the sole which Helly Hansen has called the ‘C-Zone’. This provides a nice amount of shock absorption when you’re walking.

A protective rand and a toe bumper will provide an element of protection from bumps and scrapes on rocky surfaces but there’s little lateral support provided by the shoe, so you won’t feel so stable on difficult, uneven terrain.

In the first paragraph of this review I mentioned that I was impressed and disappointed, the boots impressed me in the fact that they’re so light, comfortable and airy on hot days and the sole grips well on most surfaces (there were a few slips on wet, muddy trails). But I was upset (perhaps a strong word) by the fact that after a few weeks of use there were clear signs of wear and tear.

Particularly on the heel end of the C-Zone cushioning where the material had ripped on both boots and the sole had started to come away from the shoe. I know they’re not the most expensive boots in the world and at £109 they’re good value for money, but I find it hard to forgive the lack of quality at the heel end.