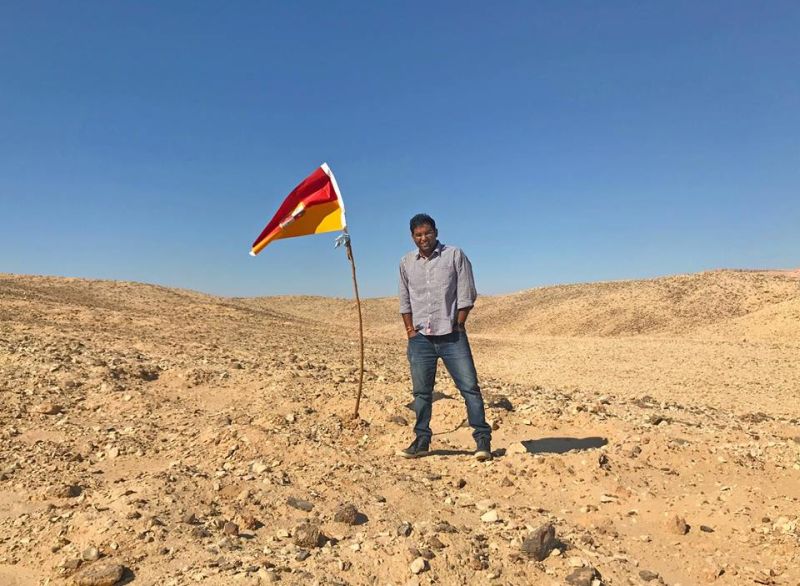 Syash Dixit, a man from India has found an unclaimed strip of no-mans land in North Africa (named Bir Tawil) and has declared himself ‘king’, renaming it the ‘Kingdom of Dixit’ – he is now looking for citizens to join him in creating an eco state.

The land is an 800-square mile, uninhabited strip of desert, situated between Sudan and Egypt and is one of the few remaining pieces of land in the world not to be claimed by a recognised state. It is believed that the land became free of control from either country when the official border was drawn up in the 19th century by British colonial leaders.

Mr Dixit travelled to the area to plant a flag while visiting Egypt during a trip through the country. He also planted some seeds in the ground after reading it is necessary to grow crops in a territory before you can claim it as your own.

In a Facebook post announcing his new rulership he said: “I, Suyash Dixit, first of my name and the protector of the realm, declare myself as the king of “Kingdom of Dixit”. I call myself, King Suyash First from today. I declare this unclaimed land of Bir Tawil as my country from now to the eternity of time. I pledge to continue to work for the prosperity of my people of the country and this motherland,”

“Following the early civilisation ethics and rule, if you want to claim a land then you need to grow crops on it. I have added a seed and poured some water on it today. It is mine,” he continues.

“Just to tell how dangerous this plan was, the route that I took is under Egyptian military (it is an international border) and is an area of terrorists so military have a “shoot at sight” orders. But, if your bucket list ideas are not scary enough then they are not worth trying!” He explains.

Here’s some vital stats about the ‘Kingdom of Dixit’:

Name: Kingdom of Dixit (KoD)
Flag: (you can see this in the featured image of this article)
Current population: One
Capital city: Suyashpur
Ruler: King Suyash I
Date of establishment: 5 November 2017
National animal: Lizard (he didn’t see any other animals there)

Mr Dixit said: “Life is either an incredible adventure or it is nothing at all. If you are not doing something epic, you’re gonna end up in a yet another grave.” We have to agree with him there!

Unfortunately, despite Mr Dixit’s efforts, it is unlikely his new rulership will be recognised under international law and experts say that only recognised states may assert sovereignty over any territory. In 2014, a man named Jeremiah Heaton from Virginia, tried to claim the no-mans land for himself after promising his 7-year-old-daughter that he would make her a real life princess.

We wish King Suyash I (Mr Dixit) all the best in his conquest!