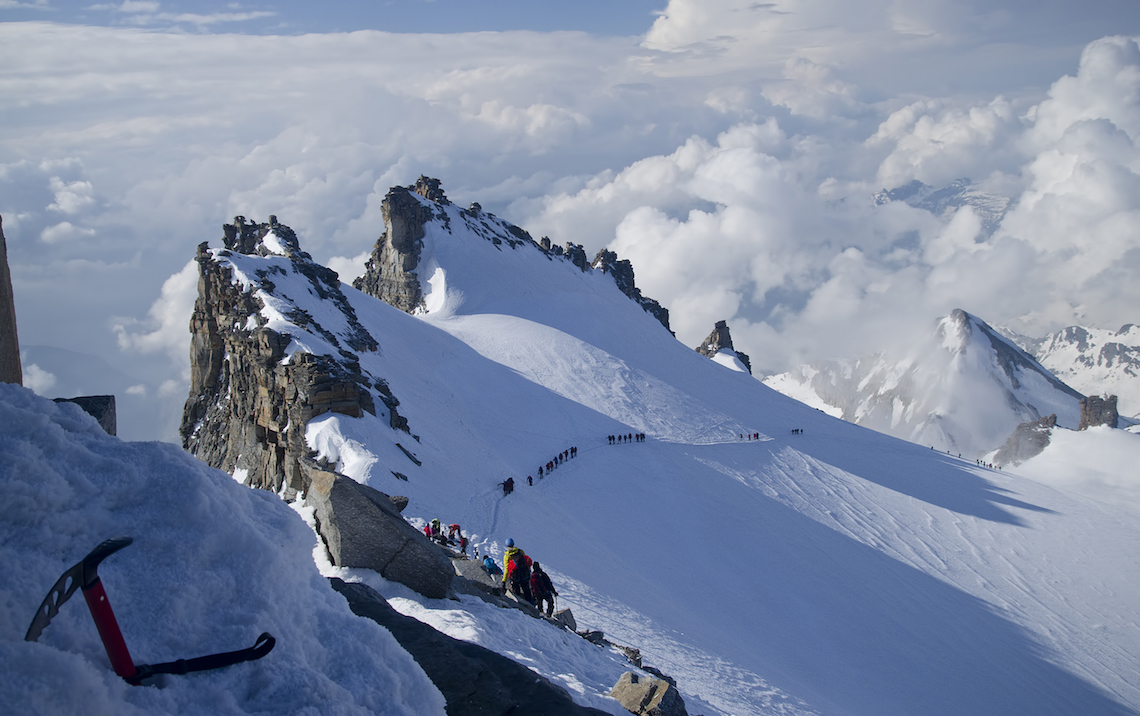 7 of the most epic adventures in northern Italy

From the picture-perfect coastline of the Ligurian Sea to the high-altitude peaks of the Aosta Valley, there are adventures in northern Italy for everyone. Sharing borders with Switzerland and France, the area comprises of four regions; Piedmont, Liguria, Lombardy, and the Aosta Valley. Within these regions, you’ll find towering peaks (including Mont Blanc, or Monte Bianco as it’s known in Italy), stunning lakes, vast plains, vibrant cities, and the romantic coastal towns and villages of the Italian Riviera.

The Aosta Valley of northern Italy offers outstanding natural beauty and fantastic Alpine scenery (including the southern side of the Matterhorn), but it’s also a region packed full of interesting and historic architecture, such as Savoia Castle, Fenis Castle, and more than a handful of Roman monuments and museums.

Plus, you’ll get the opportunity to experience the colourful festivals and carnivals that take place in northern Italy throughout the year. If you’re lucky enough to be visiting when the Pont Saint-Martin Carnival is taking place, you’ll be able to check out the chariot races. 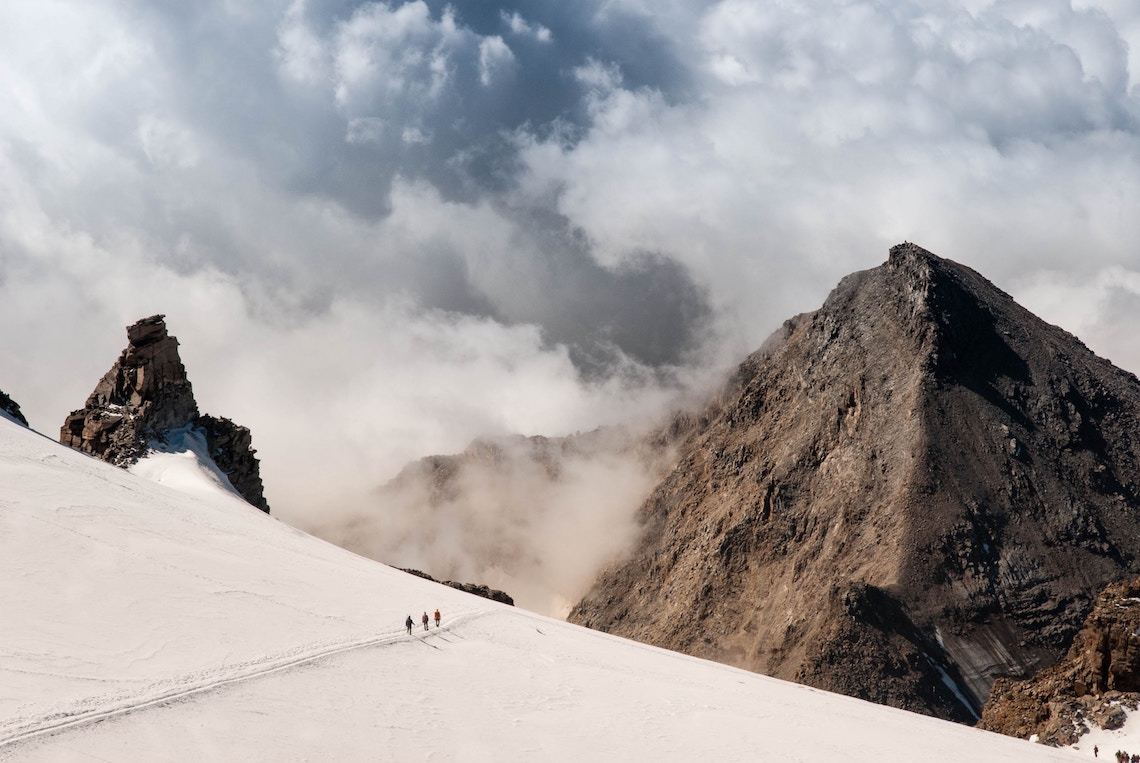 At 4,061m high, Gran Paradiso is the only 4,000m peak that’s wholly in Italy (Mont Blanc and the Matterhorn share borders with France and Switzerland respectively). Technically-speaking, the ascent is relatively straightforward, with there being only a short scrambling section on both of the two routes to the summit, but as there are no lifts that will take you part the way up, you’re in for a slog.

Don’t let that deter you though, as if you put in the effort you’ll be rewarded with commanding views of the rest of northern Italy and the Italian Alps as they spread out around you, and the snow-covered rocky ridge to the summit provides some photo-worthy backdrops. Located in the Graian Alps between the Aosta Valley and Piedmont regions of Italy, the routes up Gran Paradiso start in Alpe-Pravieux which is just a two-hour drive from Turin Airport, which is easily reachable from the UK. 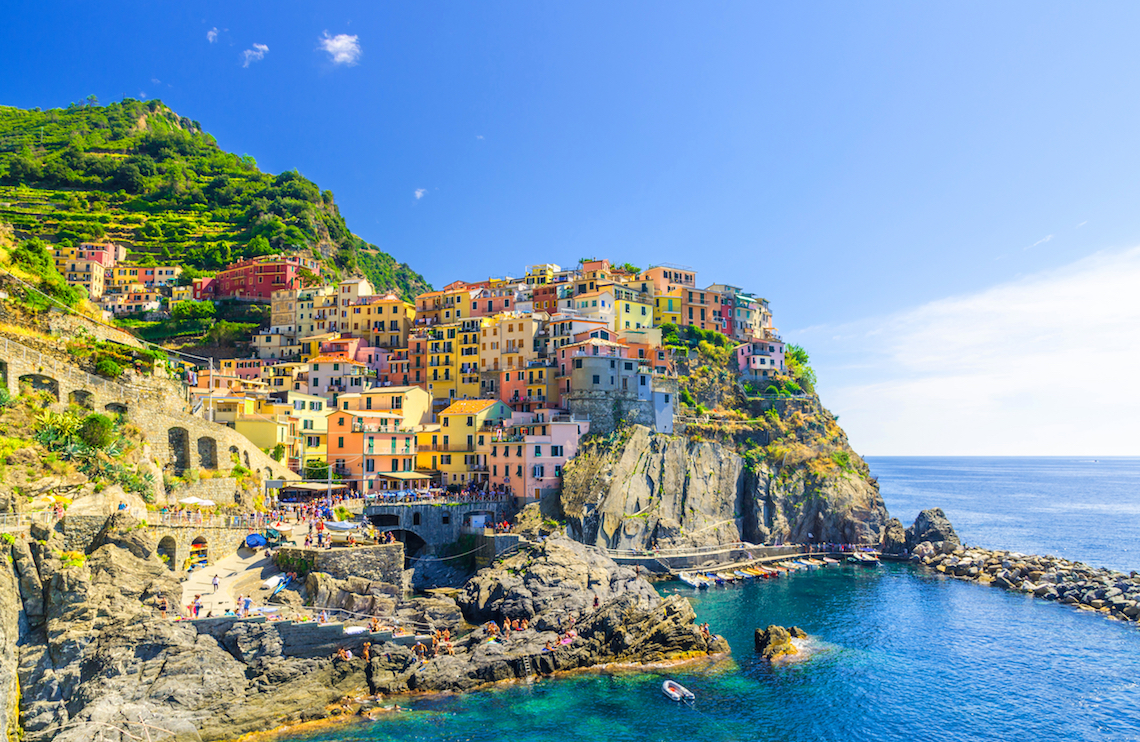 Comprising of five villages (Riomaggiore, Manarola, Corniglia, Vernazza, and Monterosso al Mare), Cinque Terre is perhaps one of the most well-known stretches of coast line in northern Italy. Away from the dramatic peaks of the Alps (which sit a few hundred miles away to the north), you’ll find beautiful, rugged coastal cliffs that rise high out of the Ligurian Sea and, nestled into their rocky forms, some of the most visually impressive and romantic villages you could hope to lay your eyes on. Connecting the five villages, you’ll find a seven mile hiking trail, the Blue Trail, otherwise known by its less alluring name, Trail #2.

Walkable all year round (though sections are regularly closed due to landslides, so check before you go), the Blue Trail will allow you to experience the best views and most charming culture of Cinque Terre, allowing you to dip in and out of the famous cliff-side villages. The route starts in Riomaggiore, the most southerly of the five villages, and heads north, finishing in Monterosso al Mare. To hike the trail in its entirety will take you around five hours, but take your time to explore each special place and you’ll easily have two days of adventure. 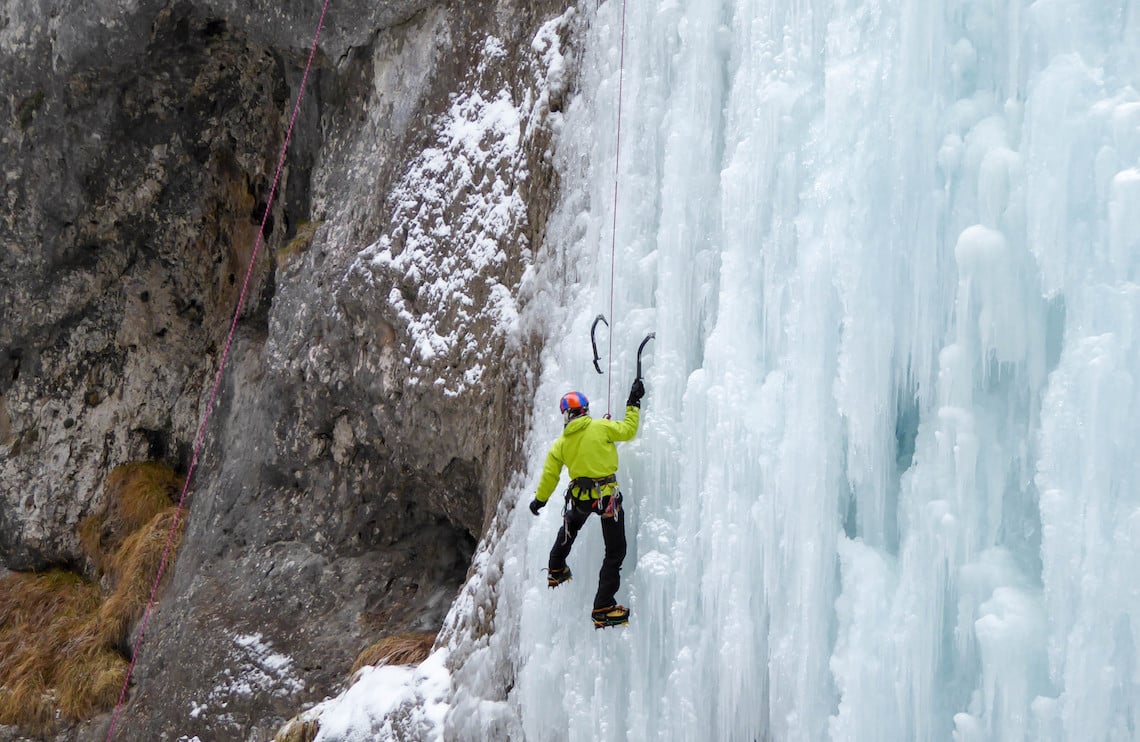 With over 35 ice falls of varying technical difficulties, Livigno, the ski resort tucked away in the northern Italy, is the perfect location in which to get your ice climbing fix. The steep-sided limestone walls, coupled with cold, Alpine temperatures (often the coldest in the region) make the perfect conditions for magnificent ice falls to form, some of them even stand away from the walls, forming incredible free-standing formations.

Whether you go it alone or hook up with one of the many local guides, ice climbing is a sport that everyone should try at least once in their lives, and Livigno is a great place to start. Better still, this place is a world-class ski resort, so combine a day of ice climbing with a week on the slopes, and you’ve got the ingredients for an epic winter adventure in the Alps. 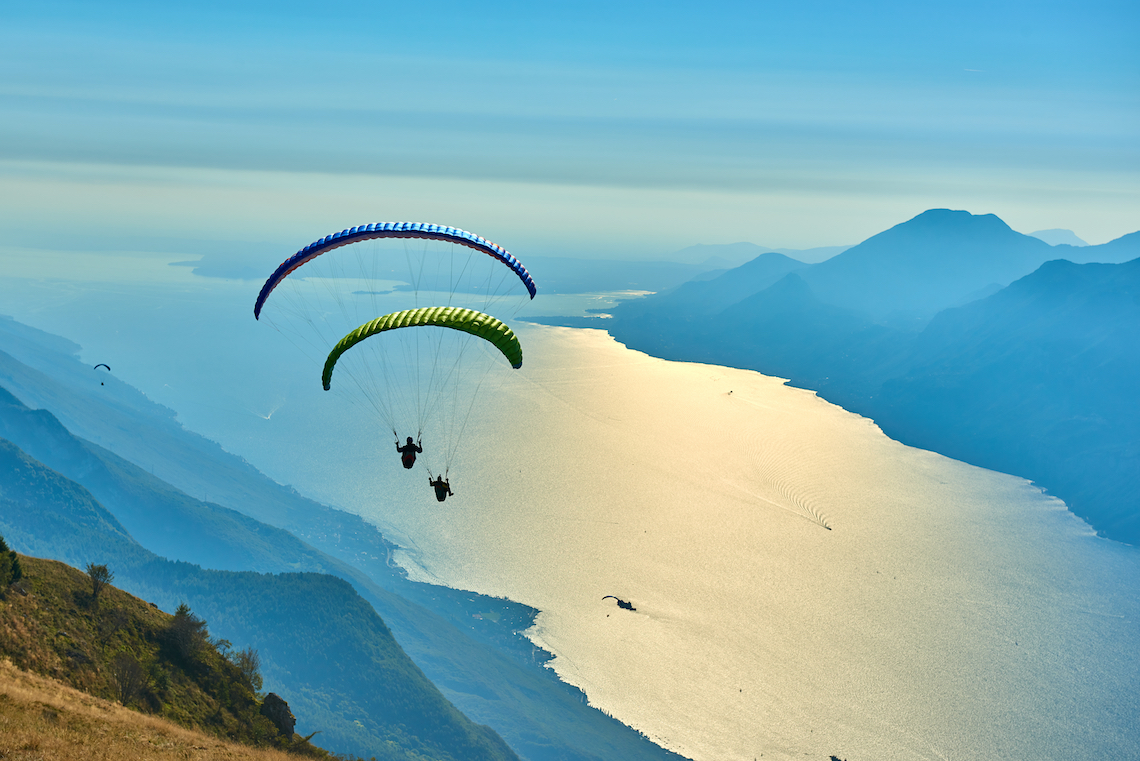 It’s easy to look at paragliding and imagine an adrenaline-filled activity that’ll get the heart racing and the sweat pouring. The reality is that paragliding is one of the most peaceful experiences I’ve ever had. Soaring high above the ground, there are no distractions, just peaceful quiet and views from a vantage point that only birds get to see.

A top paragliding location needs a few things; high mountains from which to take off, gentle wind conditions, and suitable landing locations on a flat area. In northern Italy in the region of Lombardy you get all of these and the chance to see some of Italy’s most majestic areas from the sky, like Lake Garda.

Admire one of the most beautiful Alpine lakes 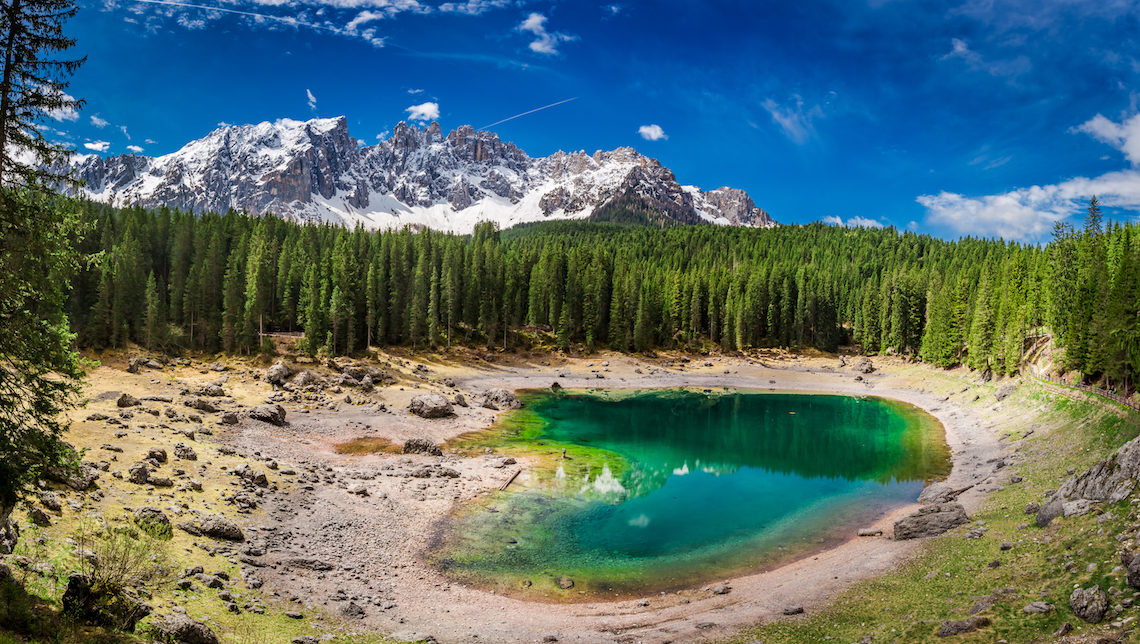 I love a local legend and Lake Carezza, also known as the Rainbow Lake, has a great one behind it. If the stories are to be believed, a sorcerer was once walking near Lake Carezza and heard the alluring sounds of a nymph who lived in the lake. He fell in love there and then, but knew that if he approached, the nymph would run at the sight of him.

He sought the advice of a local witch who told him that if he could create a rainbow that stretched from the jagged peaks of Latemar (a beautiful mountain which can been seen from the lake’s shores) to Carezza, the nymph would become curious and want to know what was going on. The witch instructed the sorcerer to disguise himself as an old merchant and innocently tell the nymph what the rainbow was made out of and how she too could make jewels in the air. While she was distracted, he could snatch.

The sorcerer did as the witch said, though he forgot one key part – he forgot to dress as the old merchant. As the nymph made her way out of the lake to admire the rainbow, she recognised the sorcerer and quickly disappeared into the lake, never to be seen again. The sorcerer, furious with how his dating life was going, grabbed the rainbow and hurled it into the lake, where it dissolved and spread out onto the water’s surface.

Were it not for that unfortunate sorcerer, you wouldn’t be able to find what is surely one of the most beautiful lakes of northern Italy just off the side of the SS241, about half hour from Bolzano. Here, Lake Carezza sits peacefully, its multi-coloured waters reflecting the needle-like peaks of Latemar, the westernmost mountain in the Dolomites, in a picture-perfect setting. A short path circles the lake, making this an ideal place to stop off if you’re travelling through the Dolomites during an Italian adventure. 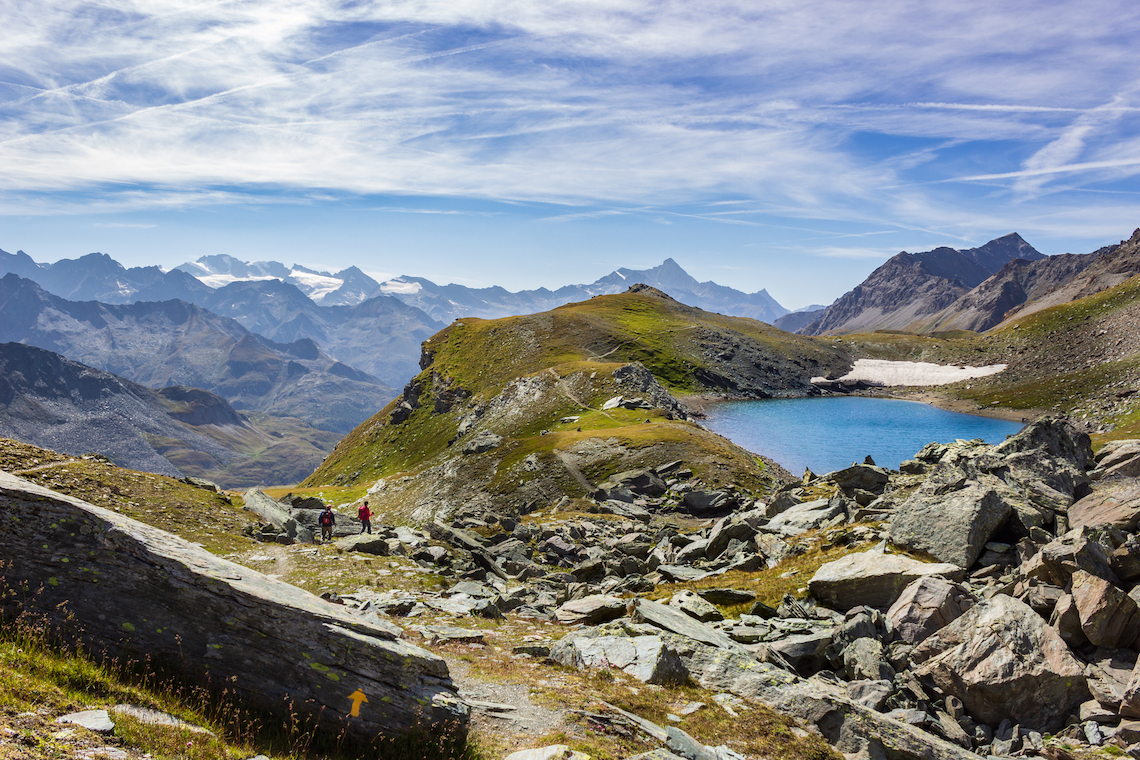 Head to the Aosta Valley in northern Italy and you’ll be spoilt for choice when it comes to adventurous activities. Whether it’s climbing Gran Paradiso, the only 4,000m mountain wholly in Italy, trekking along the ancient mule tracks that link various Roman and medieval relics, or skiing in one of the many top-class ski resorts, you’re bound to be accommodated here.

If you’ve only got a day to spare, then perhaps the best way to spend it is by tackling the Borelli Bivouac Trail, a one-day hike that will take you through one of the most beautiful and impressive landscapes in the Alps. Starting in Purtud in Val Veny, a valley on the south east of the Mont Blanc massif, close to the ski resort of Courmayeur, the trail will take you to the wonderfully located Borelli Hut, which sits at 2,325m at the base of the Aiguille Noire de Peuterey. This isn’t just a straightforward walk, though. The trail mixes hiking with via ferrata in a route that’s exposed and exciting, though technically easy.You can walk the trail by yourself if you’re experienced at via ferratas on exposed mountainsides, or there are numerous company’s whose guides will take you on the journey for around €200. 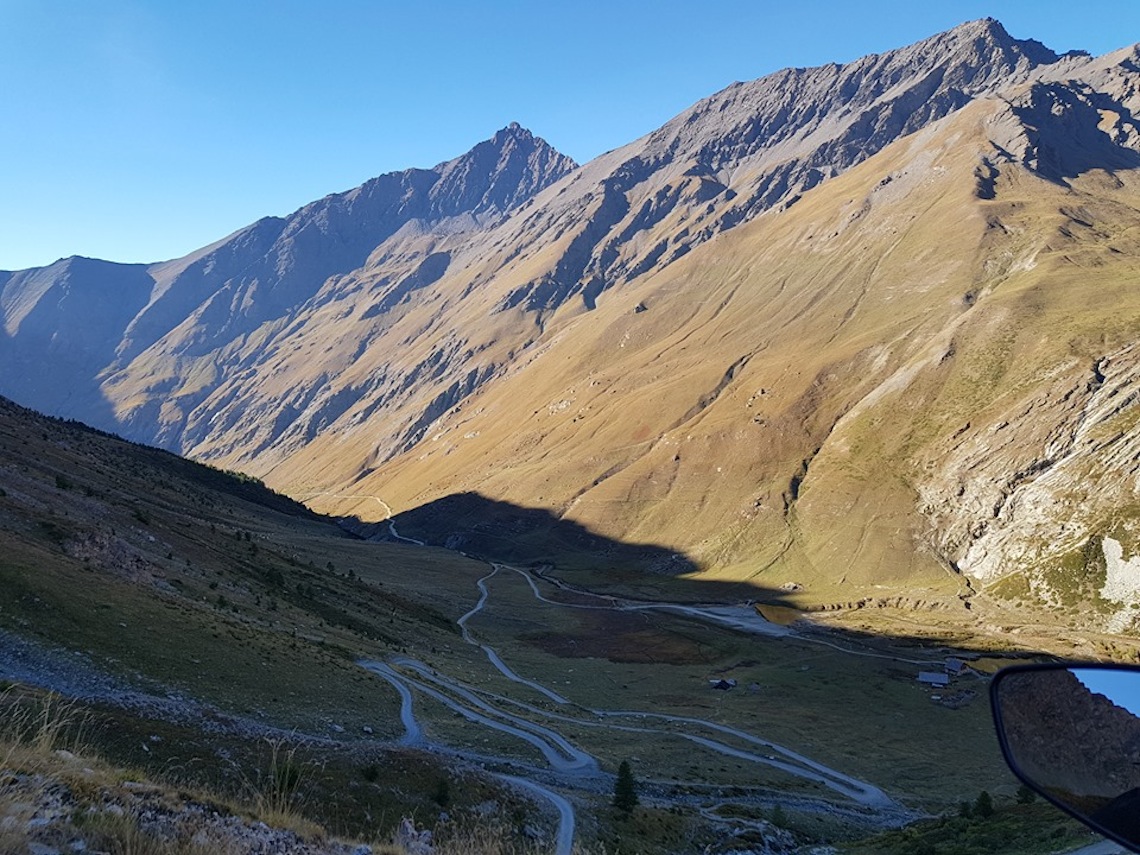 While the mountains of northern Italy provide the perfect setting for hikers, climbers, mountaineers, and skiers, they are also the playground of many a motor enthusiast. Sometimes, ditching the walking boots in favour of four or two wheels is the perfect way to spend a day in the Alps as they offer thrilling roads, with each hairpin bend revealing a view that will bowl you over.

If I had to pick one road in northern Italy that epitomises adventure travel though, it would be the Colle del Sommeiller. This gravel mountain pass tops out at 2,993m above sea level, and it’s all drivable if you’re on a motorcycle or vehicle with a decent amount of ground clearance. In fact, the last time I was up the top of the pass (October 2018), there was a guy and his dog chilling out under the awning of his Volkswagen T5 camper… That’s the life alright.

Starting in the Alpine town of Bardonecchia, this 17-mile long route follows a narrow, twisty tarmac road to the small village of Rochemolles. From there, the tarmac ends and the gravel trail begins with a series of zig zags before levelling out alongside Lago di Rochemolles lake and dam. The trail carries on, taking you between imposing mountains, until you reach Rifugio Scarfiotti, which is open during the summer months and offers good food and welcome refreshments. You can park up here and enjoy a few trails into the mountains, though this is where the fun begins, with a series of seriously steep and tight hairpin bends which lead to a high plateau.

Once up there, it’s like you’re in another world, and you’re rewarded with spectacular views and jaw dropping mountainscapes. The top of the road is up another set of zig zags, these with larger, looser rocks under tyre. Due to the high altitude, it’s not uncommon for the road to be inaccessible past here, but wherever you make it to on the Colle del Sommeiller, the journey is one you won’t forget.

And for more inspiration and ideas, get yourself the latest volume of Wired for Adventure – available here.