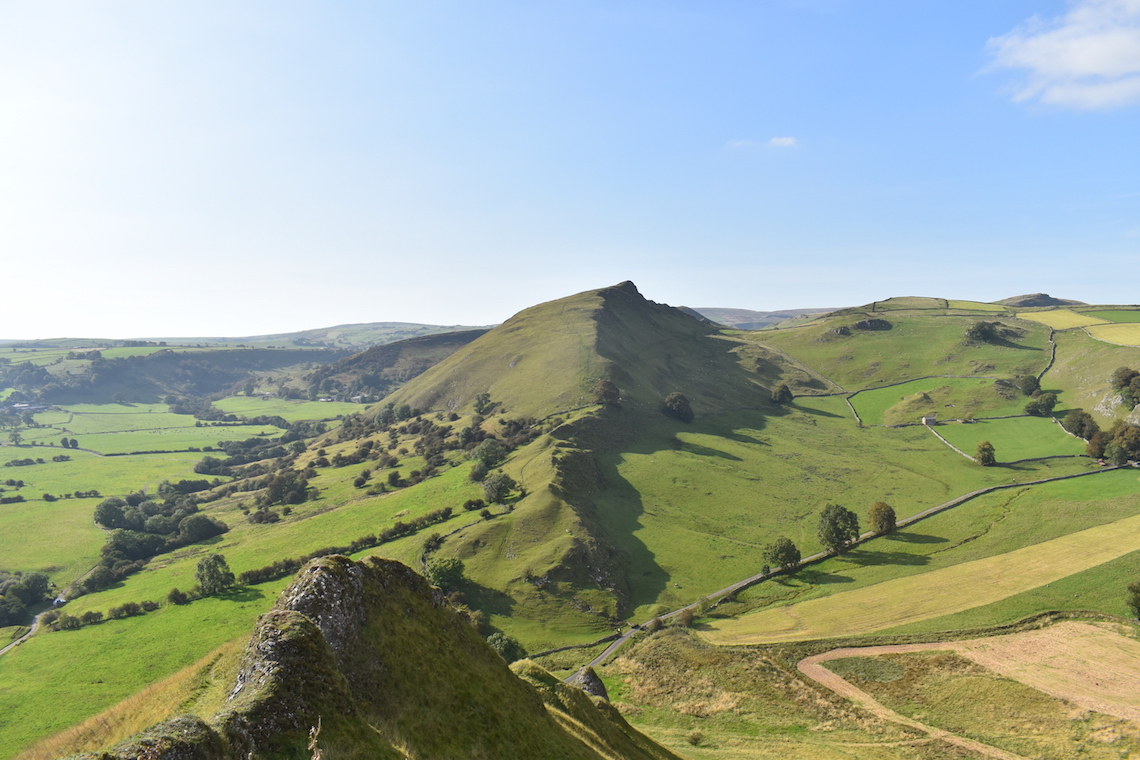 UK Adventure: Scrambling onto the Dragon’s Back

As we swung around the hairpin bend, the Dragon’s Back came abruptly into view. Chrome and Parkhouse Hill rose jaggedly from the surrounding countryside like the serrated spine of the Loch Ness monster rises from her inky depths. The two protruding pinnacles of rock are distinguishable for miles around. Seeing them for the first time brought on a shiver of anticipation, despite the unseasonably sunny skies of a late September day.

We parked up in the strange little hamlet of Earl Sterndale – it’s one of those peculiar villages that seems completely deserted, in a post-apocalyptic sort of way. Sheep looked on balefully as we picked up the footpath behind the aptly named Quiet Woman pub and traversed the farmer’s fields.

Soon enough, the dragon’s back loomed into view. As tempting as it was to set straight about climbing Parkhouse Hill, we resisted, and instead crossed the main road, ducking behind a farm to pick up the footpath that cuts through the valley. No need to wake our Nessie just yet.

A gradual climb through the valley saw us stripping off layers as the sun climbed just as gradually above us. Inch by inch, step by step. Anyone would have thought it was a balmy midsummer’s day as opposed to the onset of autumn. The unusually warm weather brought with it an off-kilter sense of excitement – like the odd feeling you get when you wake up all prepared to head to the office, only to realise it’s actually Saturday.

At a junction of paths, we turned westward, crossing a moor with the dragon’s back dozing to the left. Now it began to make sense. To climb this beast, it seemed we must approach from behind and clamber on at the tip of the tail.

We ducked down onto a minor road to hide from view and followed it up through Dowel Dale, a steep, yet short ascent that soon levelled out. Following it round, the countryside opened up like a storybook, with dales and dragons popping up on the horizon as if by magic.

A left at Stoop Farm, followed by another left up a concessionary path brought us directly behind Chrome Hill and Tor Rock, which forms the lower part of the dragon’s back. We took a moment to slug some water and assess the best course of action. She looked all the more threatening up close, and it became clear that a steep and rocky scramble was certainly on the cards. 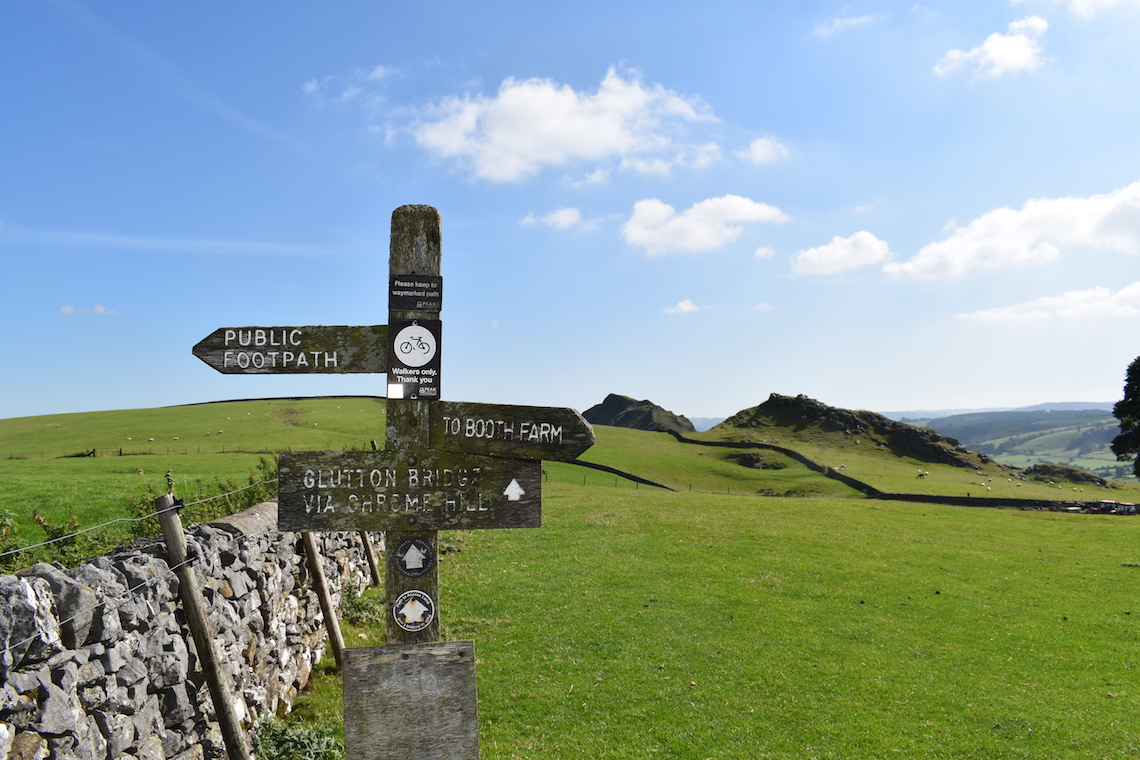 There was only one thing left for it. Dropping down quickly behind Tor Rock, a path skirted around the edge of the field, and it was time to begin the climb onto our Dragon’s Back. It’s not too tricky at first, though you’ll find yourself using your hands more often than not. You’ll look up, thinking the summit is in sight, before realising it’s simply another of the dragon’s saw-edged spines.

Towards the top, the ground begins to level out along the ridge, leaving you free to concentrate more on the surrounding splendid views. Right at the top, you’ll stumble upon the hidden little archway where we took shelter from the now sweltering sunshine and snapped some pictures.

Despite stunning views to all points of the compass, we didn’t linger long at the top of Chrome Hill. It seemed our dragon had a slight flying ant infestation, making it prudent to head a little further along the ridge to find a spot to eat our sandwiches. Sure enough, there was a lovely grassy area just below the summit, where a light breeze danced through the air. Magic.

From here, we could see almost the entirety of Parkhouse Hill, our next challenge which from our elevated position seemed but a minor blip along our route to the finish line.

Following the delightfully steady descent along the ridge, we noticed that the only way to get to Parkhouse Hill was to drop down all the way back to road level, meaning it was not perhaps the simple task it had first appeared.

Upon reaching the minor road which cuts between the two stegosaurus-style spines of the dragon’s back, a light debate broke out about the best route up to the top. There wasn’t any particularly obvious path, although off to the right I could see a very narrow gully which had been worn into the near vertical rocks.

With now-tired legs, we began our final scramble up onto the dragon’s head. The late afternoon sun bore heavily down as we scrambled through the dry dust, forever looking for the next outcrop of rock to grab a hold of. Chrome Hill now seemed but a stroll in the park in comparison. Perhaps if the ground had seen some rain it would have been easier to get traction, but our boots slipped and slid on the dusty soil as though it were sand.  As we grappled tufts of earth and tree roots to hoist ourselves upwards, thistles and sharp rocks pricked our hands for the trouble.

Luckily, the ascent was as short as it was steep, and we found ourselves over the worst of it before too long. Taking a breather on a narrow ledge, we spotted two classic cars driving down on the road we’d crossed, now far below. They tootled along just like toys, and the whole scene was reminiscent of an aerial shot from a period drama, without a telegraph pole or high-rise in sight to spoil the illusion.

Legs burning, we followed the tiny rocky path all the way up to the summit, more sure-footed now but still using our hands to keep steady as the exposure opened up towards the top.

As we stood atop the dragon’s head, sweaty and filthy from the climb, we took in the view of her ragged spine stretched out behind us. Bathed in a golden glow from the late afternoon sun, she had never looked more surreal. We almost expected the ground to shift beneath our feet as she finally began to stir. While the climb up Parkhouse Hill was certainly taxing, and not for the faint-hearted, the view from the top was undoubtedly the best of the whole day. 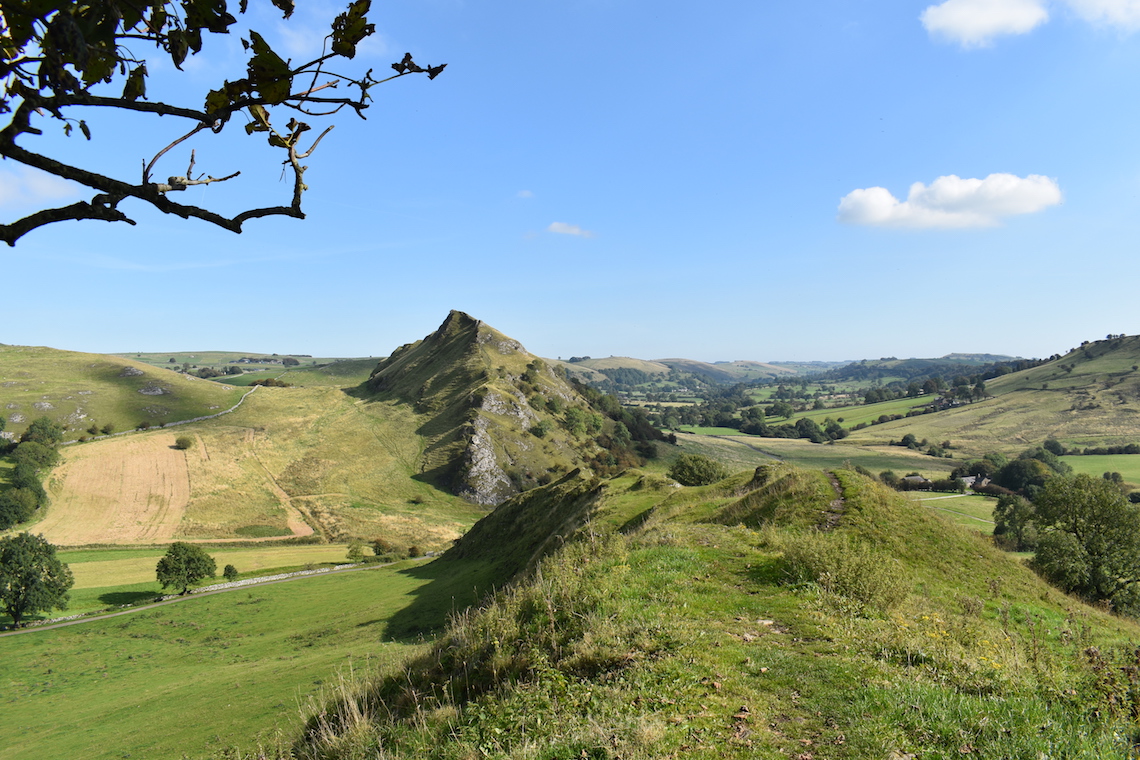 From this stunning vantage point, you can also see the town of Earl Sterndale and your finish point, nestled among the countryside within spitting distance.

Weary legs zig zagged us down the hill and across the farmer’s fields from whence we came. The prospect of a drink in a lively pub did not seem promising by the look of the Quiet Woman (not to mention we were covered from head to foot in dust), so we decided to head back to our beautiful yurt at Knotlow Farm Campsite and get our hot tub fired up instead.

You don’t know true bliss until you’ve sat in a wood-fired hot tub with an ice-cold glass of sauvignon blanc, watching the sun disappear over the peaks and set the sky alight. A hot air balloon even drifted into land in the field next door to complete the fairy tale scene.

For dinner, we rambled down the Limestone Way to the Bull’s Head in Monyash for a hearty meal and a few drinks with the locals. It’s safe to say we got completely thrashed in the pub quiz, but had a lot of fun, nonetheless. Walking back to the campsite with the night sky twinkling above was a perfect end to a truly mystical day.

Scrambling onto the Dragon’s Back: Our Route

Hoping to conquer the Dragon’s Back? Here’s a map of the route we took so that you can follow it for yourself. 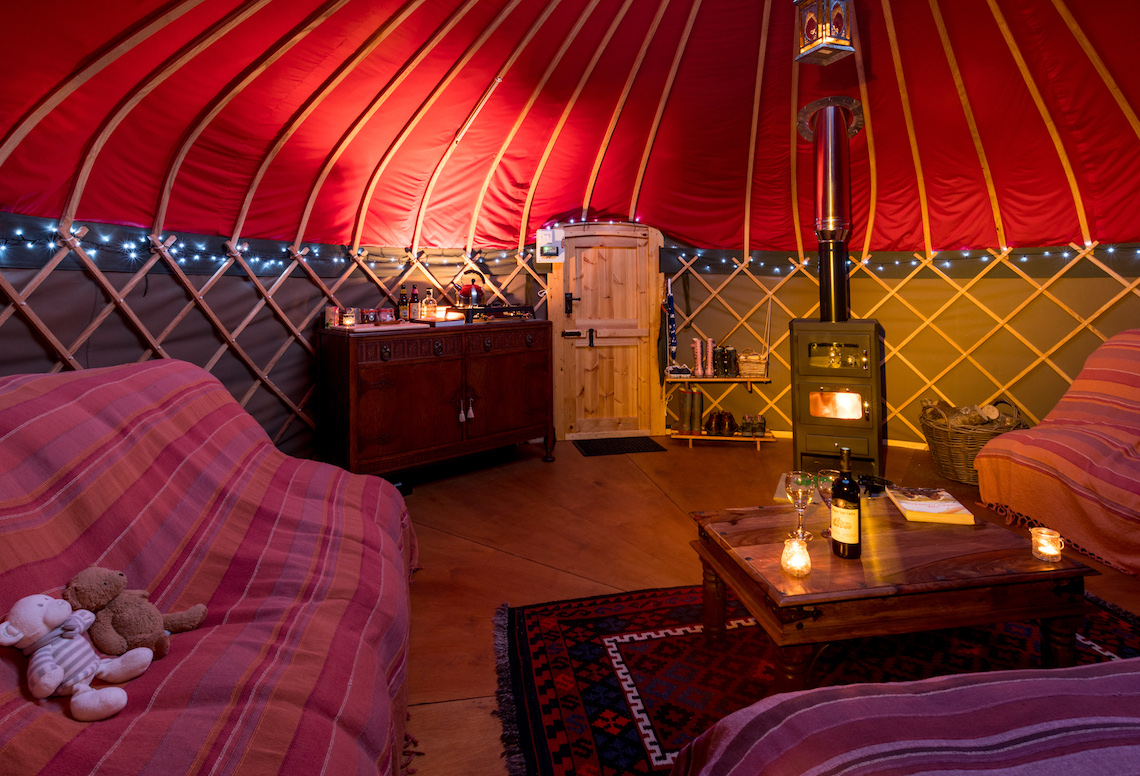 We stayed with Long Valley Yurts at Knotlow Farm Campsite and I cannot recommend the accommodation highly enough. The yurts themselves are just beautiful and incredibly spacious, with more than enough room for several people.

Fully kitted out with a small kitchenette, a wood-burning stove and solar-panelled fairy lights, plus handy extras such as outdoor seating and even a chest full of board games, the yurts have everything you need for a lavishly comfortable stay, while still offering the right-next-door-to-nature feeling we all crave in a weekend adventure.

We woke up to light streaming in through the skylight and birds cheerily chirping, which was just ideal. You can also book yurts that come with a wood-fired hot tub alongside, like we did. While these do take a while to get heated up, they’re just heavenly when you do, and there’s something so satisfying about stocking the stove with logs and gently stirring the water until it’s all steamy and inviting. The campsite is a great base for a weekend in the White Peak (and less than ten minutes’ drive from Earl Sterndale and the Dragon’s Back) and also offers thoughtful touches such as breakfast butties and pizzas cooked on site, plus nice hot showers and clean facilities.

Long Valley Yurts also has offerings throughout Cumbria, alongside the four yurts at Knotlow Farm Campsite, so don’t forget to check the website if you’re looking for a glamping break in the Lake District too. Click here to see the range of yurts and book.

What to do on Sunday 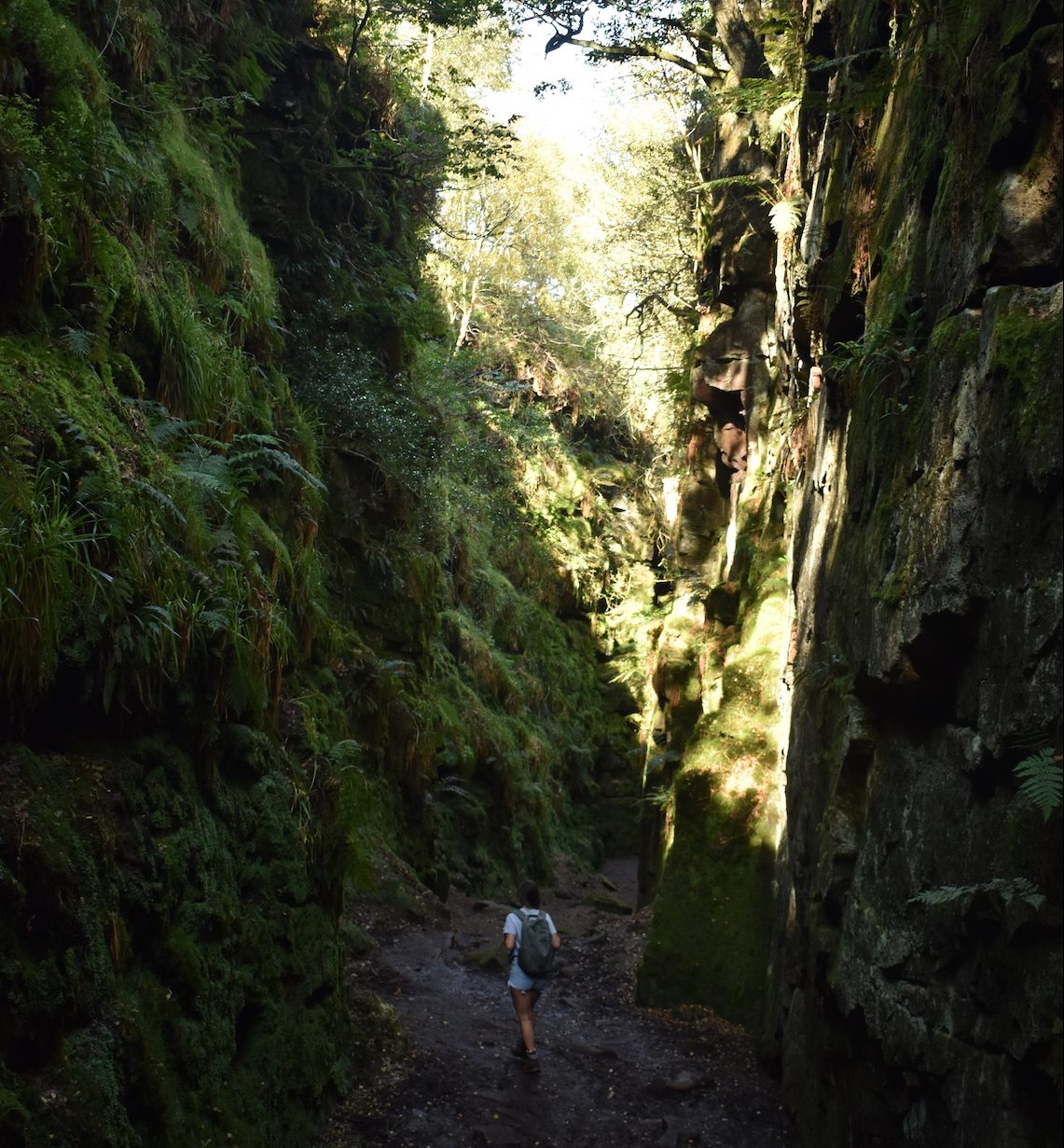 Depending on how far you have to travel the next day, it’s likely you’ll have a little time to kill the following morning. Being a national park, there are hundreds of activities to choose from just around the corner from the Dragon’s Back, from alpaca walking to go-karting.

We fancied another little stroll, but something a little different, so hopped in the car and drove over to Lud’s Church, which is actually not a church at all but a dramatic limestone gorge. You can hardly notice the scale of it until you meet someone coming the other way, looking strangely miniature against the vast cavernous walls. Legend has it that persecuted Christians went here to worship away from prying eyes, hence the name.

You also might recognize it from the BBC series Merlin. We found it was simply a delightful walk through the woods, no more than a mile or so to reach the chasm from Gradbach Scout Camp. Be warned that the path is quite muddy, so might not be the best option for wet weather, but in the dappled sunshine we experienced, it was simply glorious. Even the drive over there was a stunning one, so we knew we were in for a treat.

You can also extend the walk to incorporate the nearby Roaches, which are a series of gritstone cliffs popular with climbers. There are great views and interesting rock formations to be found here so well worth incorporating if you have the time.

6 of the most sacred mountains on Earth
Alta Via 1 and 2, the Dolomites: Best hikes in the world
The best gifts for hikers in 2023
Type to search or hit ESC to close