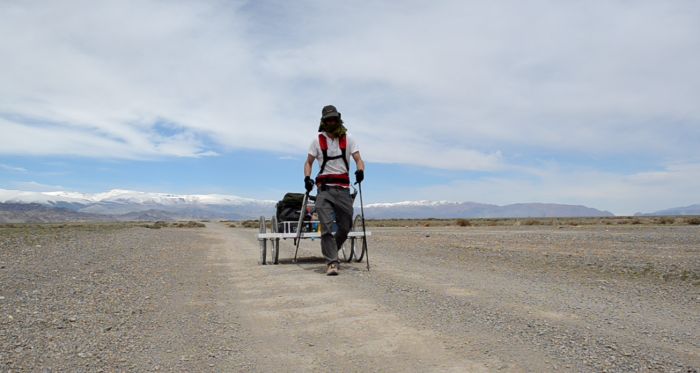 Ash Dykes reveals all about his solo walk across Mongolia

In August 2014, former scuba diving instructor and UK Adventurer of the Year Ash Dykes became the first person to walk solo and unsupported across Mongolia – a 1,500-mile expedition that took 78 days. We find out more… 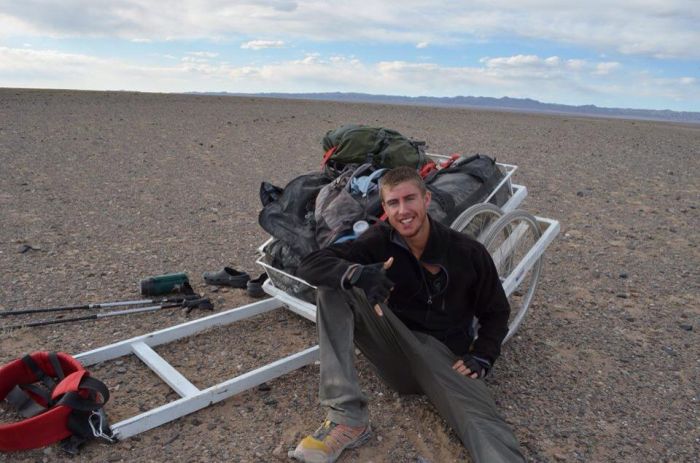 Adventure Travel: What made you decide to walk across Mongolia?

Ash Dykes: I was looking for an expedition bigger than anything I’ve done before. I knew that Mongolia is one of the most sparsely populated countries in the world, that it offers a variety of extreme weather and terrain, and that there is the threat of wolves, snakes and semi-wild dogs – all of this was attractive. I’ve done lots of cycling so I wanted it to be a walk, relying solely on myself and the provisions I carried with me. I didn’t realise I’d be doing a world first (the furthest anyone had walked solo and unsupported across the country before me was a soldier who had to be evacuated by helicopter after 1,012 miles); I was just in it for the challenge.

AT: How did you prepare for the expedition?

AD: There was a crazy amount to organise. All my previous adventures have been a last-minute ‘get the cheapest bikes and provisions we can find and leave,’ but this one needed careful planning – my life depended on it in a way. I moved back to the UK from Thailand, where I’d been working for two years as a scuba diving instructor. I was introduced to a guy called Rob Mills, who’d lived in Mongolia for five years on and off – he became my expedition manager and helped with permits, the route, water points and a back-up evacuation plan. A family friend built me a trailer to pull all my provisions in. Food was important, as was building up interest in the expedition and making sure all my followers were kept updated, and getting used to the camera gear so I could bring back footage. The list could go on forever! 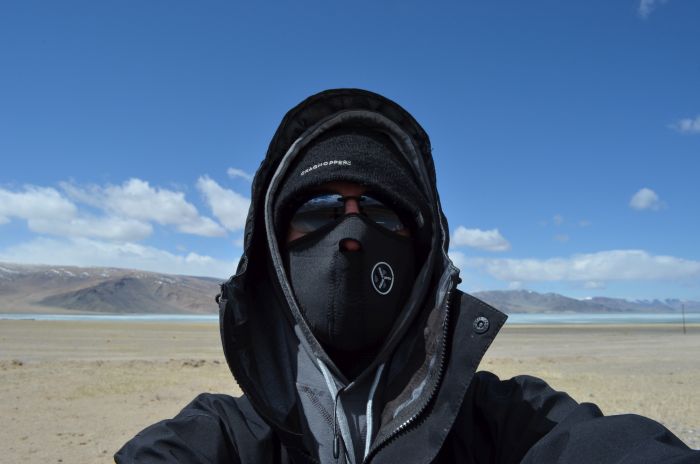 AT: Did you train?

AD: I trained a lot – three hours a day, no matter what the weather was doing, and a lot of it was in my back garden here in Wales. In Thailand I practised [combat sport] Muay Thai and I continued this on an outdoor bag. I had a big tractor tyre that I would flip and beat with a sledgehammer to build up my inner core, and I did lots of body weight exercises, like push ups and sits up. Plus jogging and cycling with a weighted rucksack.

AT: How could you afford to do the trip?

AD: I needed funding as I wasn’t earning much as a scuba diving instructor. Thankfully a production company offered me the money I needed to do the expedition in return for the footage to make a documentary of the trip, which was fantastic.

AT: Tell us about the landscape and the terrain?

AD: The landscape was incredible. Truly stunning yet harsh at the same time. I crossed the Altai Mountains, the Gobi Desert and the Mongolian Steppe. They were all very different and had their separate challenges. I could sometimes see something so far in the distance that it would take a couple of days of walking to reach it.

AT: And the weather conditions?

AD: The Altai Mountains were cold, high, snow-capped rocky peaks. The Gobi was extremely hot, flat and had everything from sand storms to hail storms. The Steppe was the most lush, with many snakes around, and sometimes the biggest storms of all, with lightning striking not too far away from me.

AT: Tell us about the people?

AD: The people I met were so hospitable throughout the journey. They were welcoming, they truly made me feel at home and they loved to help out in any way possible. A few times, when they saw me in the distance, they would ride over on horses to give me some Tsai (tea), which was much appreciated. Sometimes I was invited into their gers (felt tents) to stay and eat with them, which was an incredible experience, although on one awkward occasion I was offered a Nomad’s wife! I politely declined and made a swift exit. I did have my solar panel stolen, but that’s the only one negative out of a million positives. 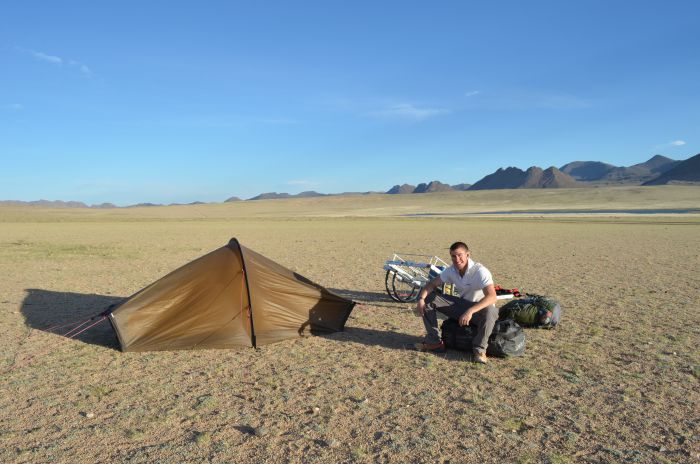 AT: What did they make of you?

AD: I had a piece of paper with information about who I was and what I was attempting written in Mongolian, so they could work out what I was doing. The men would always tense their biceps and suggest that I was very strong, whereas the women saw me as kind of crazy. I was also told twice by locals that there were wolves ahead of me and I’d be eaten alive…

AT: How many miles did you walk a day?

AD: I averaged 25 miles a day, although this depended massively on the weather and the terrain.

It was my best friend, but my worst enemy as well. It sometimes felt like pulling a huge concrete block through hell! The Altai Mountains were difficult, but I was a lot bigger and stronger at the beginning, and at least there I was occasionally rewarded with a downhill. The Gobi Desert was extremely tough – at times it felt like I was doing a one-legged squat with 120kg on each leg over and over again. There was no momentum, so whether it was flat, up or downhill, it felt like I was constantly climbing. But Elder the Incredible (the name I gave the trailer) was also my life capsule. As much of pain as she sometimes was, I needed her to stay alive.

AT: Where did you sleep?

AD: In my tent throughout the expedition. 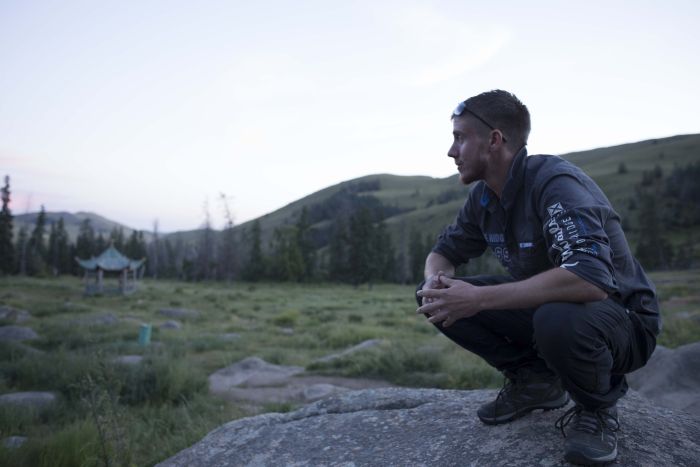 AT: How did you navigate?

AD: I used a compass and map the most. The GPS I took failed me big time so I stopped using it. I got lost a few times though. Tracks would split off in every direction, and although they seemed to be heading the right way, they would then bend back in the opposite direction on most occasions. It was extremely important to stay on paths, as they lead me to the next water source – losing them was dangerous at times.

AT: Where did you get food and water?

I carried my own meals but topped up on snacks at any city or settlement I came across. I collected water from streams, rivers and lakes, and all settlements had wells nearby.

AT: How did you find being alone for so long?

AD: It was OK. I just felt so determined to succeed that I didn’t let it get in the way. My longest period without seeing anyone else was eight days. Generally no matter how deep into the wild I was, there were always locals about, even if it was just being able to see their gers in the distance.

AT: Was there any point when you thought you weren’t going to be able to complete the expedition?

AD: once I’d started. Before I got out there I was scared as I’d built it up so much yet had never tested myself to that extent before. Once I was out there I realised I wouldn’t let anything stop me, although it was easier said than done. Like the time I suffered so badly from heat exhaustion that I think I would have died if I hadn’t made it to the next settlement. It took me seven days to recover.

AT: Was that the hardest bit?

AD: Yes, the hardest days were in the Gobi, suffering from heat exhaustion and dehydrated beyond belief. I spent four days with minimal water (which was hot) and that’s it. My body was failing on me. Another difficult time was the day I beat the previous world record. I was on a sandy path that drained me completely. I was stopping every 10 minutes with the sun beating down on me, feeling like I wasn’t moving anywhere. 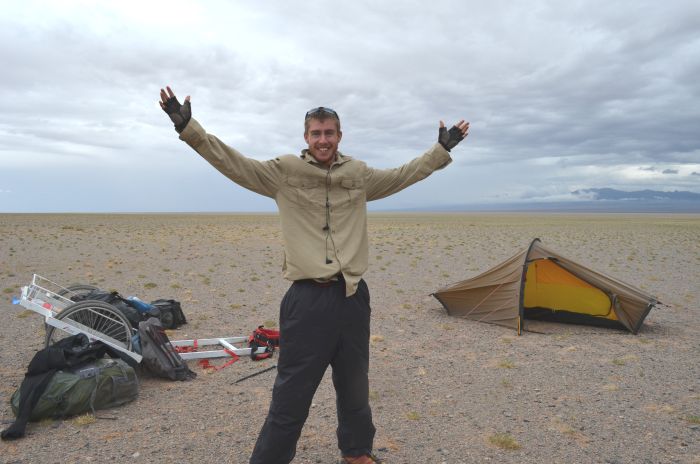 AT: And what were there highlights?

AD: There were so many. Being offered in to stay inside gers, beating the previous world record, funny moments, fighting through difficult challenges to rest up later that day with a full stomach and a beautiful sunset.

AT: How has the expedition changed you?

AD: When I was 19 I left home to travel, explore and take on challenges, and they all moulded me for this ultimate challenge. Before I went to Mongolia I was unsure of how I would react to being alone, to the threat of wolves, to stand storms, and blizzards and dehydration. Now I’ve completed it it’s made me hungry for bigger expeditions, to challenge myself even more – I have a few huge ones in mind!

AT: Do you recommend Mongolia as a country to visit?

AD: Absolutely. It’s an incredible place that’s far off the tourist track. That was one of the reason I chose the place – I was sick of the tourist route, I had the same stories as everyone else. Mongolia will provide you with your own unique experience and story.

AT: What advice have you got for AT readers planning a big trip?

AD: A lot of people told me it couldn’t be done, pointing out the dangers and negative things that could happen. Listen to them, take it in, but don’t let it stop you. It’s only you that needs to find out the real answer and the only way to do that is to try! Also don’t stress yourself out about it. All my previous adventures were a last-minute decision and they were some of the best. Don’t plan too much – it’s an adventure, things will change, so expect it and adapt – it will make for an incredible experience.

Ash is currently working away at his latest challenge, traversing the length of Madagascar. This 1,800-mile journey has never been completed before and it will take him through dense jungle, across vast deserts and to various mountain summits. To follow his journey head to www.ashdykes.com.