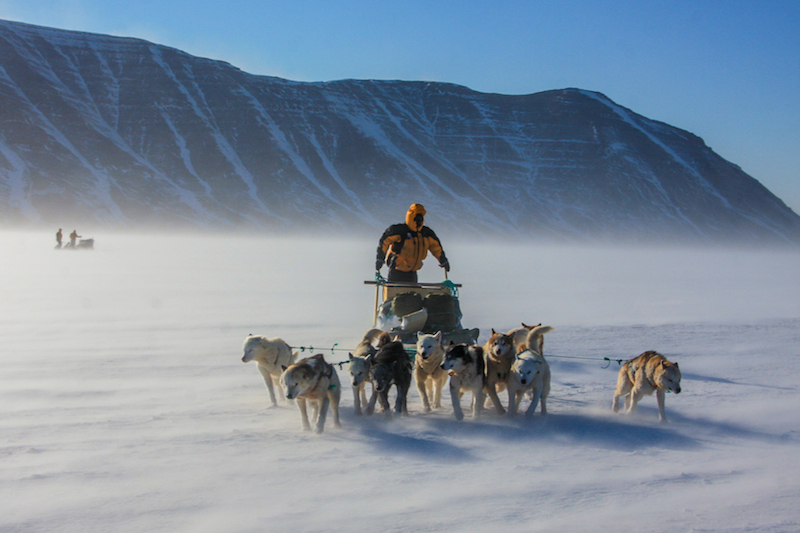 In his latest book, Polar Eskimo, record breaking Arctic traveller Alex Hibbert paraphrases 20th century writers Andre Malraux and Conrad Kilian: “Risk alone does not qualify something as an adventure. Now, tell me what have you got to report to us? What purpose? What value?”.

In this modern era of adventure travel there is an endless queue of individuals taking on convoluted challenges and journeys on all four corners of the globe. As a result, book stores are awash with tired stories that spin worn-out narratives of suffering, personal accomplishment and embellishment of difficulty. Memoirs, historical re-hashes and overhyped expedition reports are often the order of the day.

However, pleasingly, Polar Eskimo is a little different. Hibbert, who is by all accounts enthralled by the magic of cold and harsh places, tells a thoroughly enjoyable tale of five months spent living and working among the Polar Eskimos of remote northwest Greenland.

What had originally started out as an ambitious plan to lead a team of four on a world-first expedition to the North Pole in winter, ultimately transformed into a journey of personal and cultural discovery in a meeting of two very different worlds – western adventurers and indigenous Inughuit (also known in the very north of Greenland as the Polar Eskimos).

Writing in a direct and passionate style, and with obvious knowledge and insight, Hibbert knits together his team’s experiences with a formidable precis on the origins of the Polar Eskimos, the changing context of their lives after first ‘contact’ with outsiders, and the difficult political future facing this sparsely populated Arctic nation.

That said, it’s not all serious fare; there are comical exchanges arising from language difficulties and haggling over goods and services, plus touching moments between the locals and Hibbert’s team, who by the end of their time in Greenland had developed a mutually respectful relationship with the locals. And of course there are are forays onto the Greenlandic ice, surrounding coastal territory and seldom-travelled glaciers, as Hibbert and co. purchase working dogs, learn how to build their own sleds and drive dog teams without guidance.

This book will challenge your thinking on the fiercely independent and remarkable people of the Far North and may leave you with a new-found respect for their way of life. Hibbert summarises the Polar Eskimos quite aptly in the opening pages saying they are “an unlikely band of hardy and ingenious human beings. Their story is one of survival and persistence that can barely be equalled, even amongst pages of fiction”.

The story of the Polar Eskimo, blended with the lived experiences of this ambitious group of western adventurers, is one of value and purpose, and Hibbert has much more to share with us than simply toil, personal accomplishment and naval-gazing.

A must read for the Christmas break!

Polar Eskimo can be ordered online from Amazon or Waterstones.