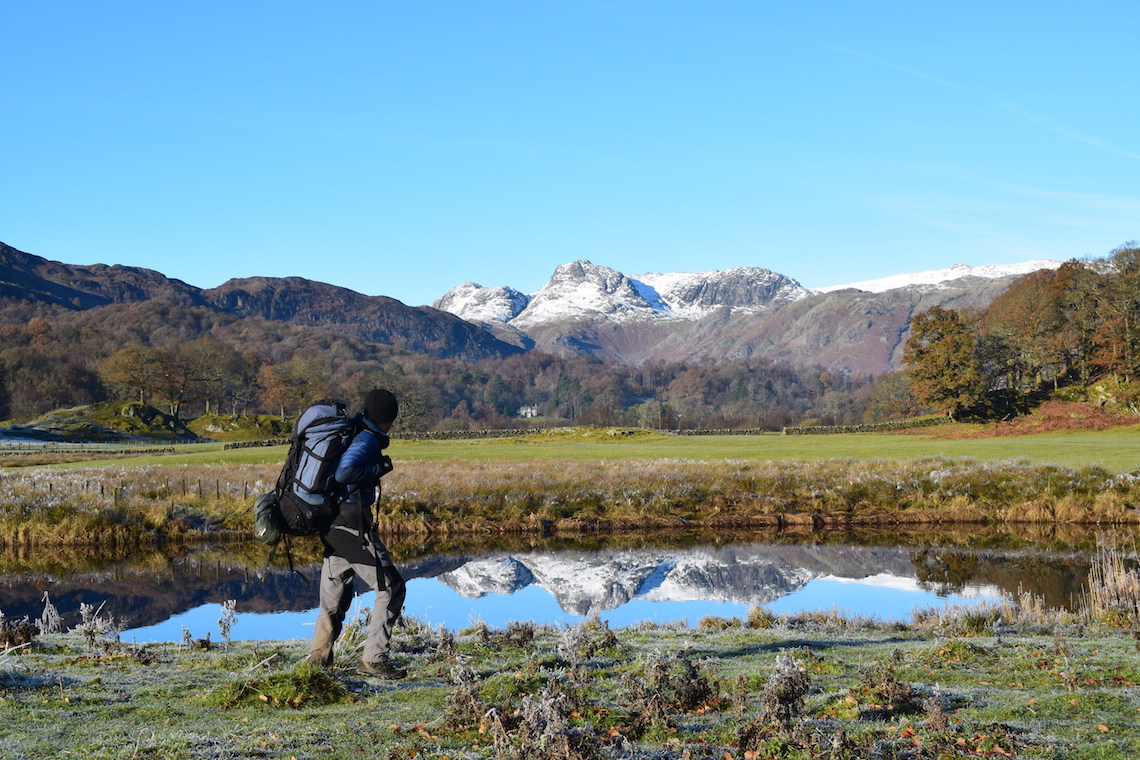 I glanced up at a skyline of enticing, snow-capped peaks and wondered whether I’d miss being on the summits during the weekend. I was in my beloved Lake District on Friday evening, but – in a change from the norm – I wouldn’t be climbing any mountains on this little adventure. Instead, my plan was to walk through the heart of Lakeland on a section of the Cumbria Way, a low-level, 73-mile trail across the county of Cumbria from Ulverston to Carlisle. Most walkers take five or more days to hike the whole trail. But, with time of the essence, I’d sample just the middle, and hopefully best, section: a 26-mile linear from Coniston to Keswick via Great Langdale which is perfect for a weekend away.

After a wild camp on the shores of Coniston Water, I emerged from my tent into a wintry utopia that was simultaneously eerie and enchanting. The brooding silhouette of the surrounding fells was lined with a blue hue and backed by a thousand beaming stars. Herdwick eyes glowed a demonic green in the glare of my head-torch and a thick frost had enveloped everything, coating the world with its icy crystals and transforming the landscape into a magical, sparkling white overnight.

I hiked in the dark up to a frozen Tarn Hows. I could almost sense the icy, Narnia-like landscape slowly coming to life as the morning light arrived and the night-time grip of winter loosened. By midday, I reached River Brathay, a beauty spot with arresting views across reed beds to the lumpy, craggy tops of the Langdale Pikes. The river was like a mirror; crisp, clear and perfectly still, creating a flawless reflection of the snowy peaks – the beauty of Lakeland in all its glory.

I spent the afternoon plodding to Old Dungeon Ghyll, slipping and sliding on the icy path over Stake Pass, a lung-busting 500m climb, and finally wild camping in the remote Langstrath Valley. The following morning, I hiked past the hamlets of Stonethwaite and Rosthwaite, before picking up the path along the western shores of Derwentwater towards Keswick, my goal.

Across the blue water, Skiddaw rose majestically above the town, forming a classic, symmetrical mountain scene with its outliers. But I didn’t care that I wasn’t up high in the summits. Despite being low-level, the Cumbria Way had still given me the fix of Lake District beauty and adventure I craved.

About The Cumbria Way

The Cumbria Way is a 76-mile-long route that will take you through the heart of the Lake District, keeping mainly to the low-level paths and tracks. Linking the Cumbrian towns of Ulverston in the south and Carlisle in the north, to walk it in its entirety would take you around five-six days, but if you’ve only got a weekend at your disposal there’s one section that should be attempted above the others; Coniston to Keswick.

This 26-mile section of the Cumbria Way will give you a delightful taste of the best that the Lake District has to offer, including wonderful views of the imposing peaks of the Old Man of Coniston, the Langdale Pikes, and Skiddaw.

Travel to Coniston on a Friday after work and get yourself booked into a hotel or campsite in the local area before you begin your trek on Saturday morning to Tarn Hows. Overnight parking is available at Coniston Sports and Social Centre. Following in James’s footsteps, you’ll pass River Brathay and cross Stake Pass before you can spend a night in the perfectly remote Langstrath Valley (make sure you’ve got your tent!).

Day two will see you skirting the western shores of Derwent Water before reaching the market town of Keswick, where you’ll be able to get a bus back to Coniston and your car, satisfied that you’ve walked one of the best sections of the Cumbria Way.

Accommodation: B&Bs, hotels, hostels and campsites are available at various locations throughout the walk, especially in tourist hotspots such as Keswick. Alternatively you could follow in James’s footsteps and wild camp along the route.

Refreshments: Opportunities to buy supplies and meals are plentiful along the walk

James Forrest is the author of Mountain Man: 446 Mountains. Six Months. One record-breaking adventure, published by Bloomsbury, which is out now.

Incredible India: Hiking in the beautiful Western Ghats
Pen y Fan: Everything you need to know about hiking this popular peak
Best hikes in the world: The Laugavegurinn Trail, Iceland
Type to search or hit ESC to close