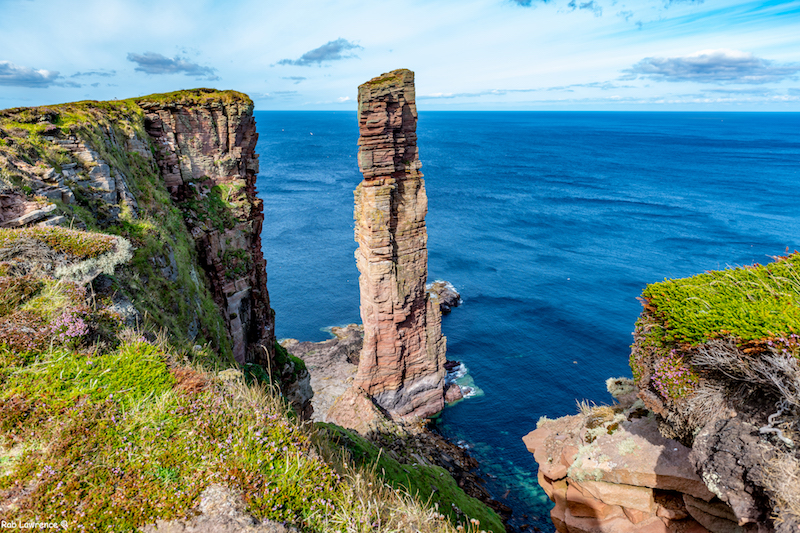 UK Adventure: Hiking on the island of Hoy, Orkney

George Turner heads to the Orkney islands to explore the wild, rugged and untamed island of Hoy…

The adventure capital of Orkney, the small island of Hoy, is almost like the Isle of Skye… only shrunken down. Boasting Orkney’s biggest hills, wildest beaches, biggest surf and indeed, the UK’s tallest cliffs, this is the ultimate weekender.

Our trip to Hoy was primarily for one reason: the famous village of Rackwick and its nearby natural wonders, including the Old Man of Hoy sea stack and St John’s Head, some of the UK’s most epic cliffs.

After arriving at the small ferry port, it soon became apparent that Hoy would become a firm favourite; big hills dominated the landscape, with farms dwarfed by their size. Although the highest is only around 400m, the elevation – due to the fact that Hoy is a small island – is nearly always around the total height.

The small village of Rackwick must surely boast one of the UK’s most stunning locations. Pinned in from all sides by massive cliffs, it nestles around an immaculate beach with inviting water. If you’re a cold water surfer, go there. Now. The waves were around 15ft and ‘clean’. 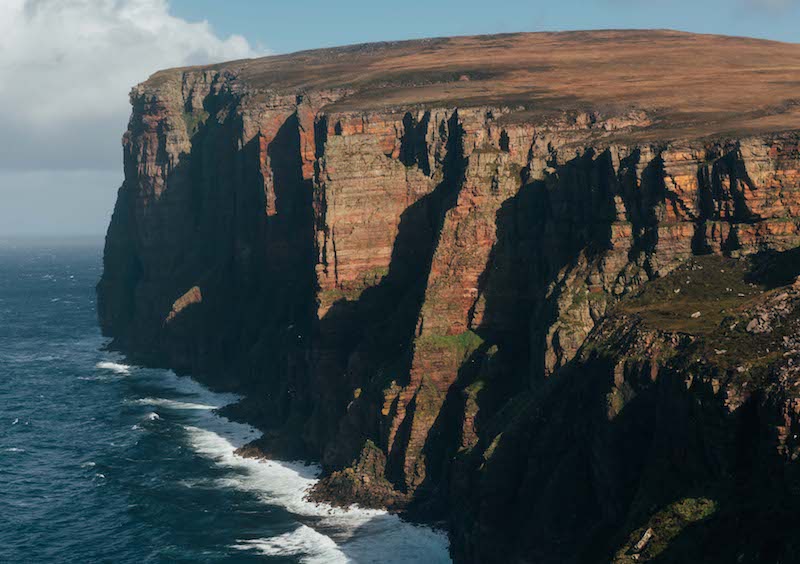 Hiking to the Old Man of Hoy affords some stunning views over Rackwick, as its first section climbs steeply onto the cliffs. The trail then winds up, down, left, and is decent under foot. Be warned though, around 50% of the hike is on the plateau, which is extremely exposed. We battled with 80mph gusts which turned rucksacks into sails — don’t be tempted to go near the edge!

As you approach, the Old Man of Hoy comes into view bit by bit. The 137m sea stack is an impressive sight to behold and, if you’re a climber, a temptation. First climbed in 1966, the Old Man is rated as an E1 (extremely severe) and is a challenge for even the toughest out there.

Then, probably my favourite part: the huge cliffs of St John’s Head. On a blue sky day, these look more Hawaii than Orkney. At 335m, these are the highest vertical sea cliffs in the UK, with an array of amazing bird life commanding the strength of the wind to their advantage, swirling around in this Jurassic-like landscape. It was difficult to comprehend the grandeur of the moment.

After returning to Rackwick, we explored the famous ‘bothy by the beach’. Unfortunately, we couldn’t stay, but with its cosy stone walls and wood burner, we’ll be returning.

Getting to Orkney may sound like a bit of a faff, but it’s really rather simple. North Link Ferries offer sailings from Aberdeen and Scrabster to orkney several times a week throughout the year. Click here to visit the website.

Old Man of Hoy: The route

If you’re heading to Hoy yourself and need to follow a route, here’s a great 10-mile circuit which can be completed in a day and gets you to both the Old Man of Hoy and St John’s Head, beginning and ending in the village of Rackwick.