Take a trip on the waters of Scotland’s Loch Goil 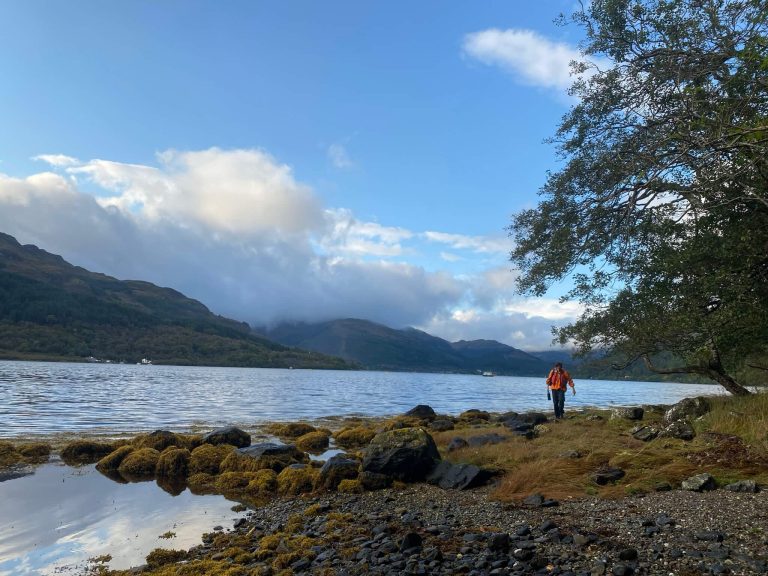 I’d taken Thursday afternoon off to pack. But when I got home, I became absorbed in other things – so instead, packing began on a frantic Friday morning. It was midday by the time the car was loaded and I’d picked up Simon. All hope of arriving at Lochgoilhead during daylight was lost.

We drove along the west coast of Loch Goil and arrived at Carrick Castle around 7pm. Under the cover of darkness, we carried our Olive Green Ranger 162 Canoe down onto the beach. Carrick Castle loomed over us. An almost imperceptible rectangular mass in the darkness. It was just a little ominous.

Glow with the flow

Loch Goil runs south to north in a near-straight line. It opens on to Loch Long at its southern end, which in turn leads to the open sea. We didn’t want to cross the loch in the dark, and the southern third of the loch’s western shore was the only reasonable place to set up camp. So, we chose to paddle into the southerly wind. 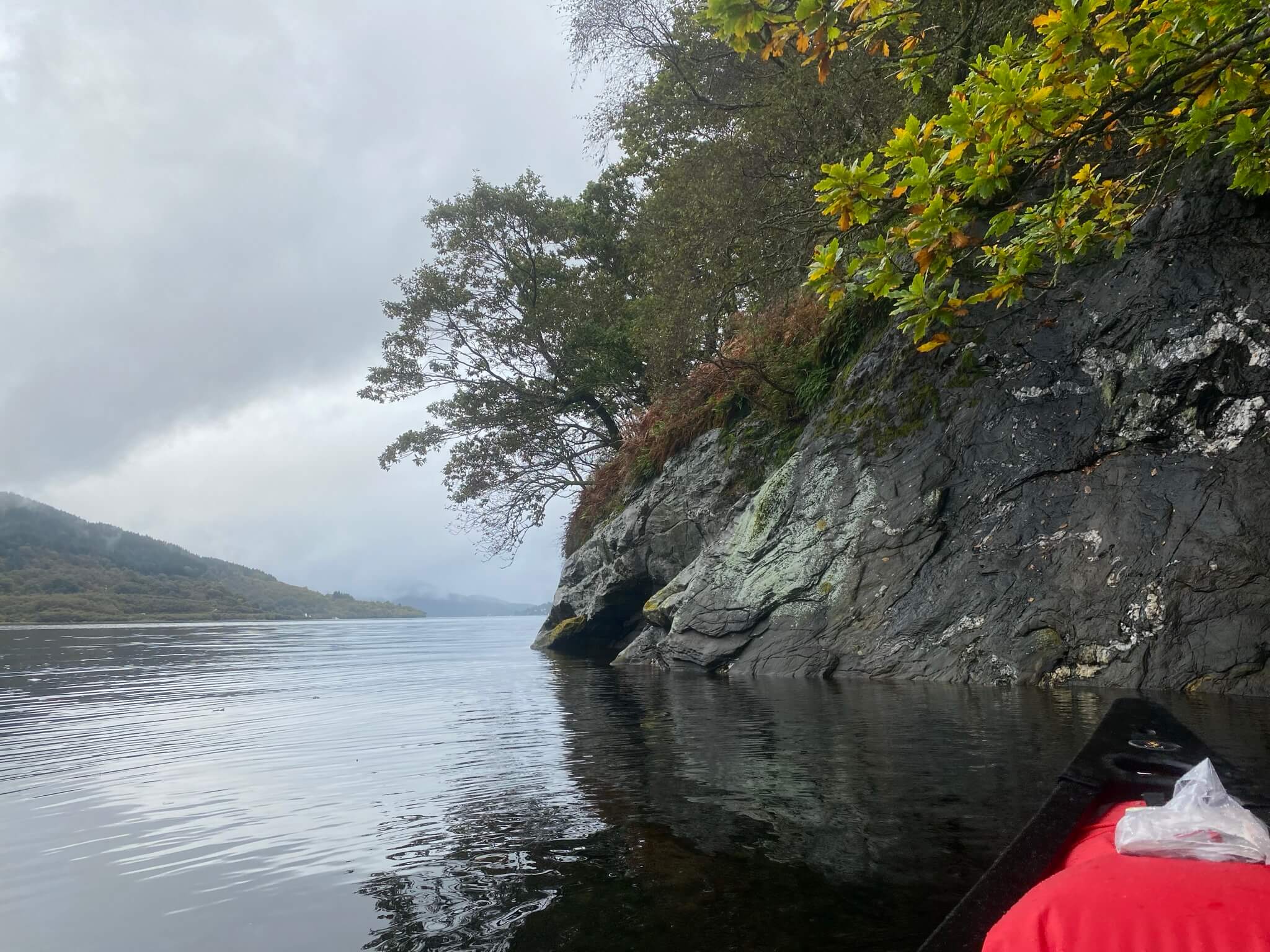 Being heavier than Simon and with him having less canoeing experience, I was focused on controlling the canoe and keeping it moving in the right direction. It came as a surprise, then, when Simon exclaimed, ‘The water’s glowing’. It took me a moment to realise he was talking about bioluminescence. I looked down and could see the water around my paddle appear as if the contents of a glow stick had been poured into it. It was a fascinating first for both of us!

We powered our way around two small headlands. The wind surged as we rounded each and the bioluminescence grew brighter. It was difficult to gauge landscapes, distances – pretty much anything in the dark. There were red and green flashing lights that we guessed must be mounted atop buoys to indicate safe passage lanes for larger craft. We hoped they had no relevance to our comparatively small boat, as it was impossible to tell how far away they were.

Simon was struggling to get any sense of depth of field as he scanned the coastline for a place to camp. But he eventually pointed towards what looked like a black hole of eerily-still water. I was a little scared to paddle towards it, but much sooner than I expected, we hit land. The black hole was actually a rocky shoreline draped in dark seaweed. 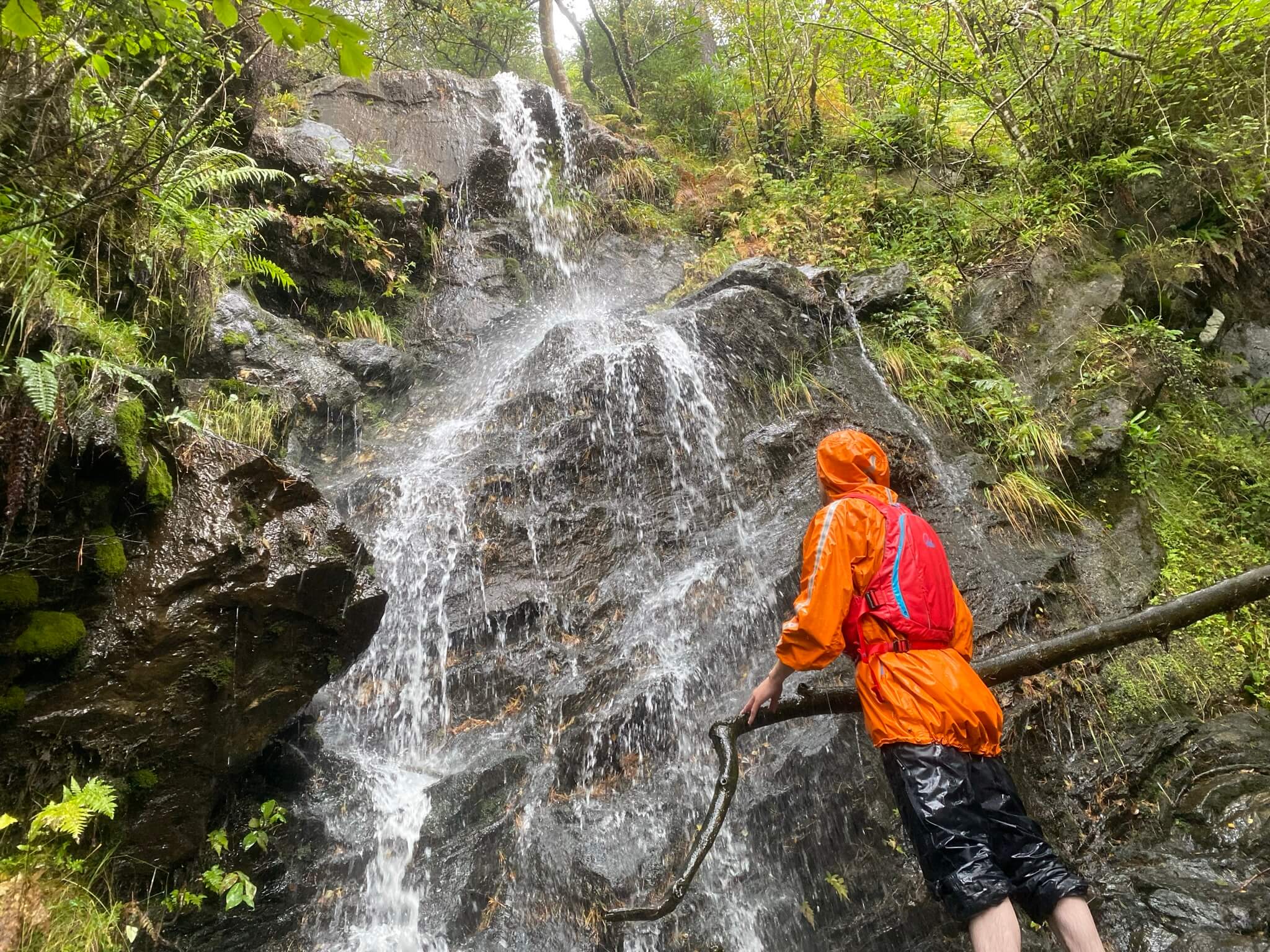 With our head torches on, we scrambled over the slippery, uneven shoreline and up a boggy hillside to a vaguely flat section of grass. It was just big enough for the two of us and there was a pair of trees we could sling a tarp over. Not ideal, but given the hour and lack of light, it would do. We brought the boat above the tide line and tucked it under a tree on a patch of grass where the canoe’s Olive Green colour camouflaged it perfectly.

This is when we left my element and entered Simon’s. He threw the right knots into various lengths of cord to ensure the tarp stayed put. And the last thing to do before we climbed into our bivvy bags for the night was cooking a rather pleasant dinner of spinach and ricotta tortellini on the Trangia.

The morning view was lovely. Following a vanilla coffee and a breakfast of sausages and beans, we packed up, crossed the loch, and explored the opposite coastline. It was great to compare what we thought we’d seen in the dark to what was actually there.

Being a sea loch, Loch Goil’s coast is packed with both mussels and molluscs. We picked up a few with that evening’s dinner in mind. You have to catch the molluscs underwater and unawares. Fumble the first attempt and they clamp down so hard on the rock you’ll need a chisel to get them off. 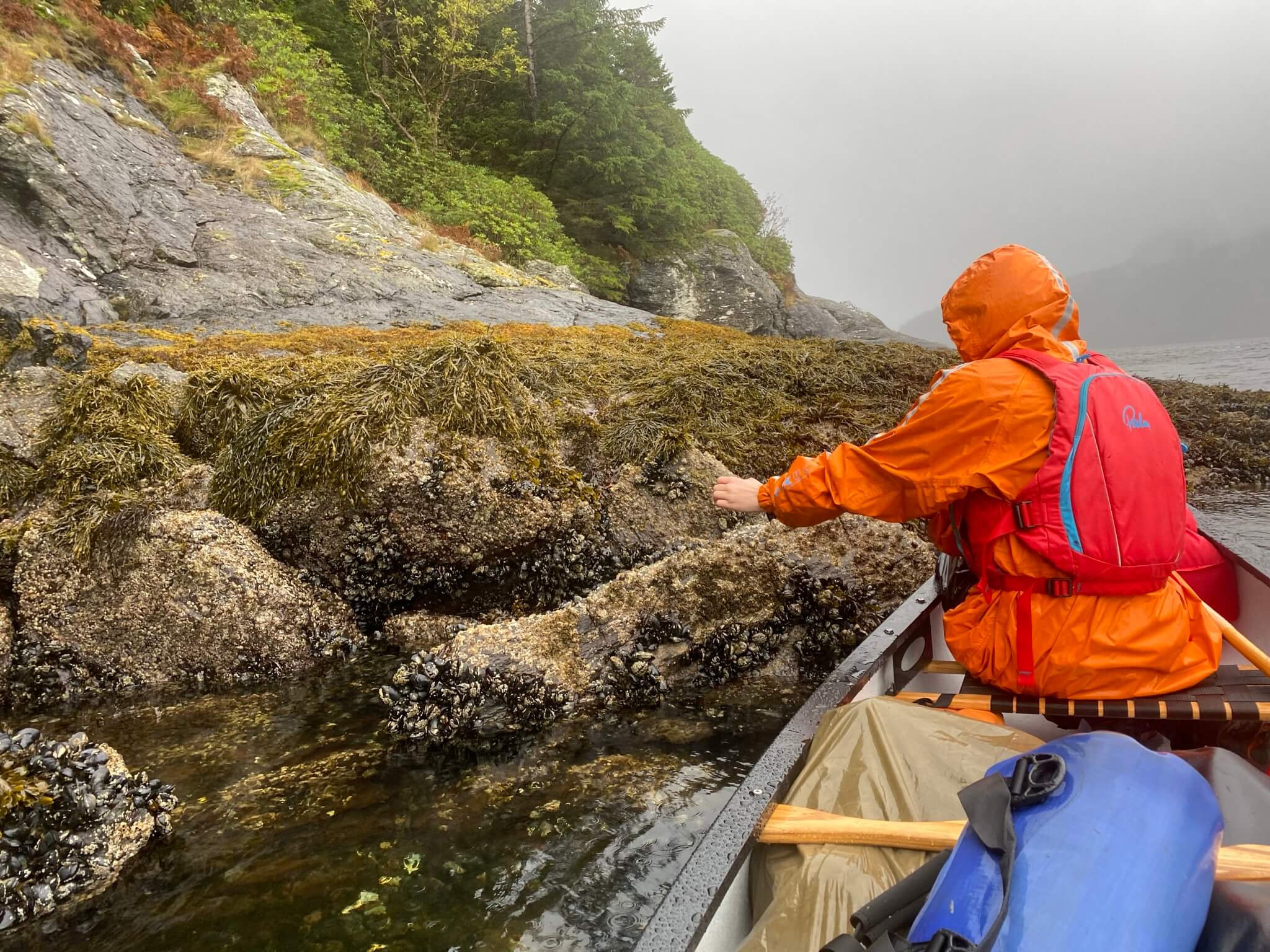 We paddled a little further along the coast, hopping out of the boat now and again to explore and examine potential campsites. A stream with several picturesque waterfalls made for a pleasant diversion before we realised just how high we’d climbed and how far from the boat we now were.

Turning to head back for lunch, I heard a familiar noise and spotted a pair of seals. We kept our distance and watched as they drifted by, before eventually disappearing under the water.

Simon had a go at steering the canoe after lunch. So, we spent most of the afternoon paddling around in circles. Once we were both thoroughly dizzy, we decided it was time to find a campsite. At that point, we faced the same challenges as the previous night.

Call of the wild

We lugged our gear to the chosen campsite. Simon flexed his bushcraft muscles again to set up the tarp, and we headed towards the shore to cook dinner.

We boiled up the seafood caught earlier that day. As we ate, we admired the many stars that were visible in the night sky above us. It was a colder night than previous, perhaps due to the lack of cloud cover – but we slept well and after a quick breakfast of granola bars, headed down to the shore the next morning to see a seal watching us from the water.

As we paddled across towards Carrick Castle on the final stretch of our adventure, I wondered at the wisps of cloud rising rapidly from a valley on the opposite shore. They looked as though they’d been puffed out by a steam train. It’s fascinating how geography and meteorology interact at times, especially in places like this. 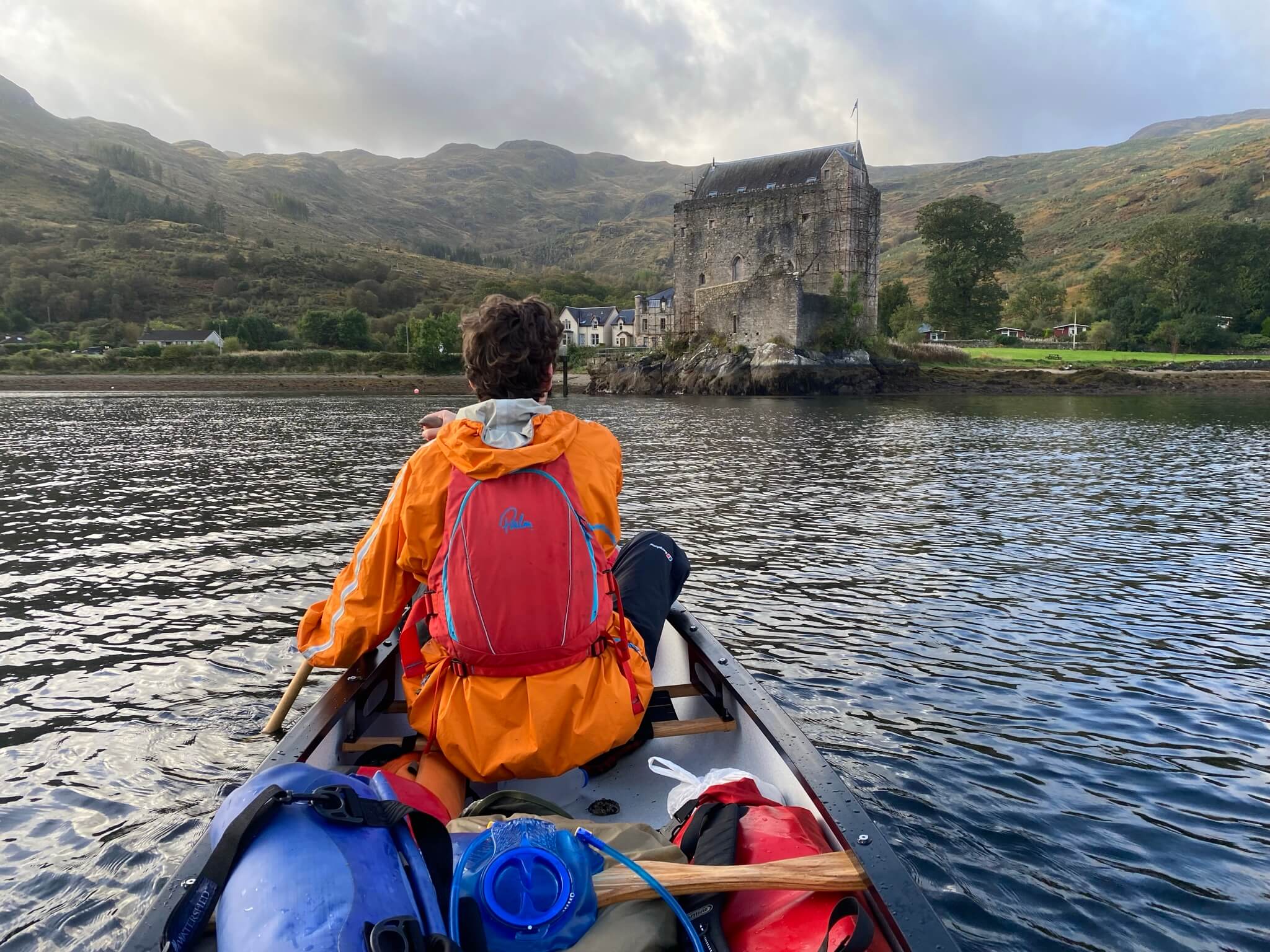 Your next adventure on the water starts here

Your 2022 adventures start right here
Why Canada is perfect for those seeking an adventure...
Win a pair of Lizard Ultra Trek sandals worth £115