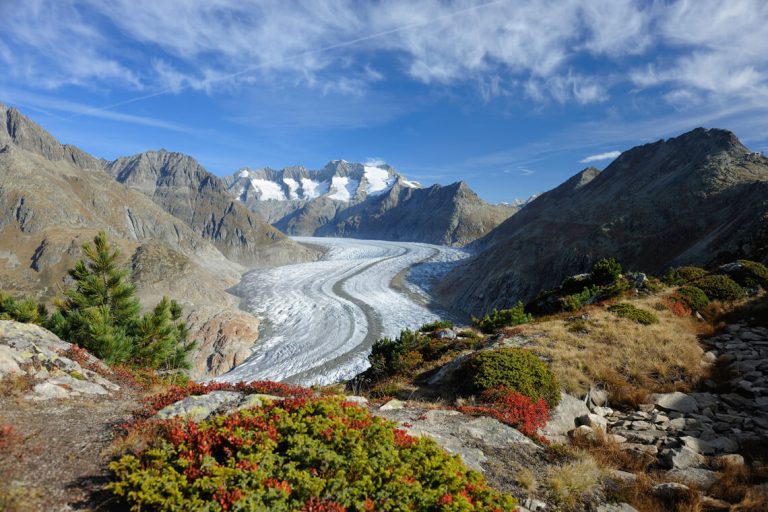 The UNESCO-listed Great Aletsch Glacier in the Swiss Alps is an astonishing sight. An enormous corridor of ice banked by rocky slopes mossed with green and rusty-leaved shrubs, pine and spruce trees, and clusters of colourful wildflowers. It’s hard to come up with fresh superlatives for such an awesome display of nature. Put simply, the Great Aletsch Glacier is phenomenal.

The Aletsch Glacier’s numbers are equally impressive. At 20km in length and with a surface area of 79 sq km, it’s the longest ice stream and largest glacier in the Alps. At its thickest, the ice is 800m deep and the glacier weighs about 10 billion tonnes. If it were to melt, it could supply every person on Earth with a litre of water every day for three-and-a-half years.

There are, of course, almost limitless ways to explore the glacier via the region’s extensive network of hiking trails. But here are six alternative ways to make the most of the immense icefield and appreciate its majesty from every angle.

Aletsch Arena’s signature experience is a tour of four official viewpoints strung along the glacier. Eggishorn, which at 2,869m is the highest of the viewpoints, is on the route of the national tourism board’s Grand Tour of Switzerland – a 1,600km circuit of the country’s most celebrated sights, complete with an official Grand Tour sign to frame your Insta-worthy photo.

From Eggishorn, it’s possible to see 40 of Switzerland’s 48 4,000m peaks, including Eiger, Mönch, Jungfrau, and Matterhorn. The glorious tour then continues alongside the frozen highway to viewpoints at Bettmerhorn, Moosfluh, and Hohfluh. Each one providing another breathtaking perspective of this magnificent natural wonder.

In many parts of the world, terrains like those found in the Aletsch Arena would be only accessible to hardened mountaineers. But this being Switzerland, nature has been harnessed safely and securely, meaning you can trek right over the top of the deeply crevassed ice.

Tours can be completed as a full-day hike (which starts and ends in Fiescheralp), or as a two-day trek from the Jungfraujoch across the glacier to the Konkordia hut. Here, trekkers spend the night before watching the sunrise and continuing to Lake Märjelen and then Fiescheralp.

Natural ice caves form in the Great Aletsch Glacier due to geothermal heat (or spring thaw). As you can imagine, this produces electrifying results.

Due to the shifting nature of the glacier, the ice caves can only be explored from the outside as part of a guided hike from the Moosfluh viewpoint.

It really is something remarkable to stand on a platform high above a glacier’s edge and gaze across a frozen ocean. Now imagine flying over it.

Fiescheralp, the most eastern village of Aletsch Arena, is known as Switzerland’s paragliding mecca. With 15- and 45-minute tandem flights departing regularly, this paragliding experience combines unparalleled views of the glacier and exhilarating adventure.

Nestled among some of Western Europe’s highest peaks, the Aletsch Arena is a playground for both mountaineers and alpinists. But for those not quite ready to take on a 4,000m peak, you’ll also find a host of more accessible options. The Aletsch Arena has climbing parks on Bettmeralp and Fieschertal, as well as two rope parks and two via ferrata (routes equipped with fixed ladders, cables, and bridges).

The Eggishorn via ferrata is a riveting course, featuring a Nepalese bridge, a suspension bridge, and a zip line, as well as the usual collection of iron rungs, pegs, carved steps, and ladders. Its proximity to Eggishorn also means extraordinary views of the glacier are never far from your sight.

When the first tourists arrived in the Aletsch Arena in the early 1900s, it was for the glacier and not the skiing. Among them was former Prime Minister Winston Churchill, who stayed in the sumptuous Villa Cassel. Built by the wealthy British banker-cum-philanthropist Sir Ernest Cassel in 1902 as a summer residence and run as a hotel for decades after his death, the chateau-esque manor appears curiously out of place on the Riederfurka ridge.

Today, the grand wood-panelled rooms of the carbon-neutral property house a museum, cafe, and gift shop. In the basement, there’s also a Pro Natura environmental study centre with interactive exhibits showing how climate change is affecting the Great Aletsch Glacier.

Do you dream of reconnecting with nature? Find out how you can discover the Aletsch Glacier at www.visitvalais.ch/shop.

8 stunning photos that will make you wish you were in Norway
Watch: Fly over the Dolomites
Win a pair of waterproof ECCO MX shoes worth £110