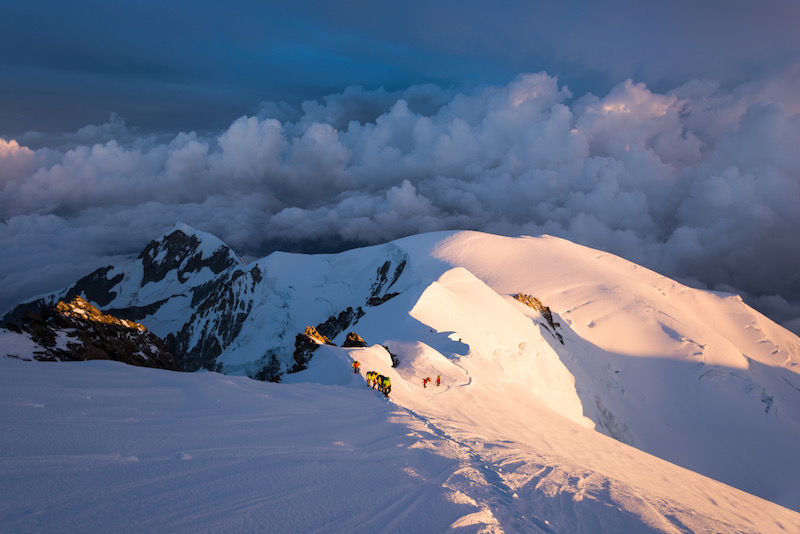 Ever wondered what it would be like to climb Mont Blanc? Delve into the snowy kingdom of this majestic mountain with Justine Gosling’s first hand account of all the incredible challenges and rewards of summit day…

At 3am, it wasn’t as cold as I expected as we exited the warmth of the kit room in the Goûter Hut and hurried outside. I guessed it was around six degrees as I wriggled my toes in my boots to keep them warm. The group huddled in the darkness as we attached ourselves to each other via harnesses and ropes. The air was still and heavy, the thick mist had reduced visibility to just a metre or so. As we set off to climb Mont Blanc, our head torches only highlighted the density of the mist and the outline of my rope partner, always just a couple of meters away.

I felt a strange sense of calm, despite the fact that at the start of a climb, you never know what challenges lie ahead. To climb Mont Blanc is no mean feat; it’s known as Europe’s deadliest mountain and last summer 15 mountaineers lost their lives. We knew a storm was incoming by late afternoon and that the altitude would affect us all. Excitement was mixed with trepidation, but awareness of the dangers in the mountain kept my emotions in check and forced me to focus on each careful foot placement as we began our assent.

We followed the darkened, misty trail, blissfully unaware of the severe drops either side of us. Occasionally, I looked ahead and was amused by the diagonal line of tiny, bobbing, white dots against the black of the sleeping mountain – the head torches of the group above us. The only audible sound was the crunching of the snow beneath our feet. Right from the start my legs felt heavy, each step a bigger effort than the last. Was it the effects of altitude already? Tiredness from a training week of climbing? My lack of fitness?

As I contemplated the answer I was distracted by a flash from beneath us. In contrast to the serene world up here, an angry storm raged in the town now over 4,000m below. A carpet of orange-tinted rain clouds seemed to divide two worlds, a clear line of separation between the chaos in town and calmness of the mountain above. Every few seconds a flicker of lightning flashed angrily below us, but we felt safe above the storm. Silence enveloped our snow-covered lair and the stars twinkled overhead. The mountain was our sanctuary and I had no fear. I felt invincible as my legs woke up and the tiredness ebbed away.

We progressed without stopping at a steady pace, zig zagging up the steep hill of the Dome du Gouter. We didn’t summit the Dome, instead we passed over the left shoulder and made our way gently downhill, then back up again to the Vallot Hut (4,360m), an emergency bivouac shelter. Our short five-minute break here allowed me the chance to add another jacket layer as the chill began to creep in.

At around 4am, the darkness began to lift as the sun rose, boosting energy levels. We could now see billowing clouds in the pale blue sky and the horizon was a streak of orange with a fiery centre. The light revealed the sharp edges and terminal drops of the Bosses Ridge, things I didn’t want to see but couldn’t help but examine. The ridge starts with a short, steep slope leading to two distinctive bumps of snow. It’s just wide enough to step on with a sheer drop down to the left. If I tripped on my rope or got caught up on my crampons and slipped, it would certainly be ‘au revoir’ for me and my rope partner. I ignored my morbid thoughts and kept my feet moving.

Fluffy grey buds of cotton wool clouds drove over our heads from all directions like cars at a junction, with the sun’s rays intermittently breaking through. It was a scene from the most perfect whimsical dream, distracting me from my now racing heart, tired legs and desperate lungs as we approached the summit. We overtook groups that set out before us, and behind we had others chasing. Spirits were high.

The last push was steep and the snow conditions horrendous. A waterfall of tiny snow baubles poured down the mountain as the snow was disturbed by our steps. I struggled to keep my footing and my ice axe was useless, simply sinking into the snow as I leaned my weight onto it for support. The effort to pick up each lost step was exhausting, and my lungs were wheezing, but I knew we were close.

We were the second group of the day to climb Mont Blanc and reach the summit, at around 6.20am. I got my cheesy celebratory, arms-in-the-air welding an ice axe summit photo at 4,812m. Clouds shrouded the mountainous view in the distance as though we were encased in a white box. We quickly became cold, so couldn’t stay long at the summit, heading back the way we came to avoid the worst of the passing traffic on the narrower sections and the escalating avalanche risk with daybreak.

Heading down, our guide reminded us of the old truism that at the summit, you’re only halfway to safety. I felt a little groggy on the descent to the hut, probably due to a combination of sleep deprivation, physical exertion, dehydration and the effects of altitude. I don’t remember much about the going down, except struggling to stay on my feet passing through the area of the snow waterfall again. We reached the Goûter Hut at about 8.15am and gave ourselves a half hour break before heading to the bottom of the mountain and into the welcoming, warm embrace of summery Chamonix.

Want to know how to climb Mont Blanc yourself? Click here for everything you need to know.

Justine travelled with Action Outdoors,  a not-for-profit charity aiming to give people the skills to have adventures and a greatly reduced cost.